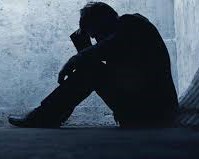 The opening question is: What’s one thing in our life we should be doing but are not doing?  To put it another way: What are we avoiding because there are too many obstacles?  Is it putting off a difficult conversation, taking better care of our health, taking another step forward in our faith journey?

Two people in today’s Gospel are in desperate situations and need to do something: 1) Jairus, who’s a Jewish Synagogue leader and whose daughter is sick; 2) The woman with a hemorrhage.  Now, did you notice how many connections there are between their two situations?

1. Two women are healed: The woman and Jairus’ daughter.

3. Both the woman and the girl were considered to be ritually unclean according to Jewish purity law.

5. Jairus falls at Jesus’ feet to ask for help and the woman also falls before Jesus to tell Him what just happened (5:22,33). 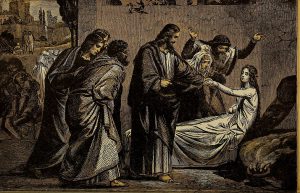 All these connections focus our attention on a similar problem and the same solution.  Jairus and the woman need to do something, but it’s all just too hard: She’s ritually unclean, so she shouldn’t approach or touch Jesus; he’s told by some people that his daughter is already dead, “Why trouble the teacher any further?” (5:35).

Now, they both have a choice: Don’t do anything or do what seems hard.  What motivates them to try?  It’s faith.  The point of today’s homily is that faith overcomes obstacles.

What is faith?  It’s trust that Jesus will help us; it is the confidence that Jesus will do what He says.  Faith is key for us, to our relationship with Jesus: “Faith is what grows in a growing relationship.  Specifically, a person’s confidence in God.”  The more trust we have in Him, the more that relationship grows.  Think about the people you know with the best relationships with Jesus—they all have extraordinary confidence in God.  Did you know that the only times in the Gospel when Jesus was amazed was when people either showed great faith or a lack of faith.  “When people acted on what they believed about him, he was impressed (Andy Stanley, Deep & Wide, Ch. 6).  Aren’t we impressed, too?

I once met a lady in her forties, who had eight children, all delivered by C-section, believe it or not.  You know what the doctors recommended about having more children, right?  Well, they got pregnant again, and I said to her, “I was told you can’t have that many C-sections.”  She replied, “Well, he’s got to come out somehow,” and he did, and both mother and baby did just fine.  The family has great faith.  Only the father is earning money while the mother focuses on the children at home.  And God takes care of them.

There are so many stories about God taking care of people financially, 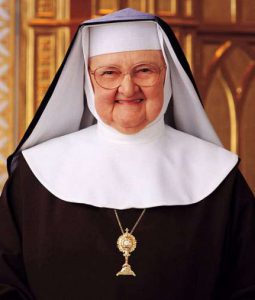 and all of them involve taking risks for God.  There’s a beautiful story about a nun named Mother Angelica.  When she of all people started a Catholic TV station, she felt called to expand it, and she ordered a large satellite dish without the money on hand.  When the delivery truck brought it, it cost $600,000.  So she said to the man, “Give me a minute.”  She went inside and prayed to God, “I thought you wanted me to have it, so you have to come through.”  When she went back outside, she told the man she didn’t have the money, and right then, another sister ran out, “Mother, Mother, someone wants to speak to you.”  It was a business man on a yacht in the Bahamas who said, “I’ve been reading your book, and something just told me I have to give you $600,000.”

This pattern of trying to do God’s will, not knowing how it will happen, then God rescuing her happens over and over again in her life.  That’s because she had so much faith and was trying to do His will.  That’s why she said, “God expects us to do the ridiculous so He can do the miraculous.”  God expects us to take risks to follow Him so that He can do miracles (We’re not talking about risky business ventures to make money for ourselves!).

The whole idea of launching the Brick Campaign was risky.  I have no idea what we’ll do if we don’t make it.  However, 7 reasons converged to indicate that we had to start and trust in God.  I believe God wanted us to move in this direction, and He’s already given us $528,000 in four months, which is 250% more than we’ve ever fundraised in a whole year.

I’m not saying that everything will be easy and there will be no suffering if we have faith, only that God will take care of us.

What about at our jobs?  Do we have faith there?  I’m not sure if everyone’s ready to hear this, but God is calling us to grow as a community, so I hope we can receive this with an open heart.  There are some jobs that, as Christians, we actually shouldn’t do.  When we learn this information, it can create one of the most difficult situations in our life.

Early Christian writers, for example, condemned Christians serving in the Roman military.  Why?  Because Roman soldiers had to worship other gods, which is against the first commandment.

A Catholic I know was a pharmacist, and after he fell in love with Jesus, he realized he couldn’t dispense the morning-after pill because it can cause an early abortion.  So, he was in a dilemma: Does he keep his job and do something immoral, or lose it and perhaps never work again dispensing?  It was an overwhelming situation and so many things were going through his head.  When he mentioned his problem to the boss’s son, who also worked there, the son said that it was unprofessional for him to stop.  So this Catholic was worried it would be like father like son.

However, he had faith and so decided not to dispense: Being a person of principle came first.  Then what?  He did the reasonable thing: He talked to his boss, explained his position, and asked not to dispense.  And the boss, who wasn’t Catholic, was open and understood!  It was really surprising.  He was expecting to be kicked out.  It also led to an interesting discussion about God, and God came into the workplace. Thereafter, the boss pulled him from dispensing so he wouldn’t have to violate his conscience.  He said God blessed him immediately and in the future, because he got to keep his job, and now that he’s a doctor, he knows God will be with him in even more difficult situations. 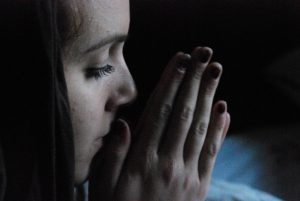 Faith overcomes all these obstacles.  We need more!  So, how do we grow in faith?  Ask for it and practice it.  1) We need to ask Jesus for more faith, because it’s a gift: “Give me more faith.”  How many people pray in the morning?  I’m giving you a very specific suggestion: Please add to your morning prayer, every single day, a request for more faith.

And, as an expression of faith, we have to come into contact with the Eucharist.  Yes, Jesus can help us from anywhere, but, if we have faith like Jairus and the woman who both went up to Jesus and physically knelt before Him, we have to stop being lazy and go to a chapel or to a daily Mass.  This Saturday, we have 1st Saturday adoration, with Praise and Worship music at 7:30 p.m. and Jesus is inviting us to come right up to the altar, kneel before Him and tell Him our needs.

2) Practice it.  Faith grows when it’s used.  Take little steps of faith.  For example, “I’m going to pray for this person who annoys me, who looks like he’s hopeless.  Lord, please help him.”  This happens all the time to me: I pray for someone who seems hopeless and they grow!  Tell God that you’re doing it in faith, that you’re depending on Him, that you have no other recourse, and that you’re expecting something.  He’ll respond.  “God expects us to do the ridiculous so He can do the miraculous.”

There’s something in our lives that we’re supposed to do but aren’t doing.  Like Jairus and the woman, we’ve heard about who Jesus is and what He can do, and now we have a choice: Are we going to give up or try to touch Him?

I love what Jesus does in the Gospel: When He enters the room, everyone who doesn’t believe and who laughs at Him, He puts outside.  Only the people who believe will be able to see the miracle.

That’s what we need to do: Put the doubt and those who doubt outside of our minds, and then we’ll see Jesus do a miracle.  Faith overcomes obstacles.