Have I ever ignored any of you?  I would never have done it on purpose, but it’s likely that I probably have, because I’m a sinner like everyone else.  But the question is: How did it feel to be ignored?  And it is a two-way street sometimes, isn’t it?  Some people never say “Hi” to me after Mass.  They go out the side doors or walk around me.  They say it’s a long lineup but I think they’re just snobs. 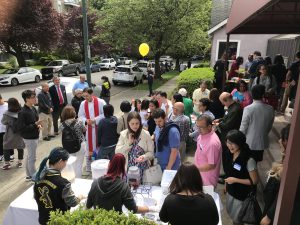 However, I am aware of a tendency in me to focus on you to the exclusion of people outside the parish.  To a certain extent, it’s reasonable: You’re my family, therefore, my first responsibility.  But there’s another reason which is not good: It’s not as easy.  It’s easier and more satisfying, for example, for me to talk to a devout Catholic than a non-devout Catholic because we share common interests. If you’re a guest here, or relatively new here, it’s great you’re with us, and I apologize if I or anyone else hasn’t shown you Christ-like hospitality—we’re working on it.

Is there anyone in your life you ignore, or to whom you don’t give enough attention? Do any of you have a strange uncle in the family that everyone kind of ignores at family gatherings, or from whom the children run away?

Here are five key findings from our hospitality survey we conducted one month ago: 555 people responded—thank you!  Of those who did, 90% feel welcomed in our church, which is a blessing, but only 68% of them think a visitor would feel welcomed—something on which we need to work.  50% said they would reach out and get to know another person or shake hands during the Sign of Peace—this is certainly something we wish to improve.  9% think we need more gatherings after Mass such as Name Tag Weekends, and 11% feel we could improve our hospitality.  These results give us a sense of where we are, where we need to grow, so that we’ll do better when we take another survey on December 8-9. 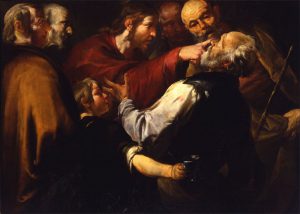 Today’s passage from St. Mark’s Gospel is known as the Blind Bartimaeus passage, named after the main character in the story.  Today, we want to approach the passage from the perspective of the disciples who are following Jesus.  What’s happening is that Jesus, His disciples, and a large crowd are leaving Jericho, and, along the roadside is Bartimaeus, who would have been sitting there asking for alms.  When he hears that it is Jesus passing by, he shouts out, “Jesus, Son of David, have mercy on me!” (Mk 10:48). But we, the disciples, tell him to be quiet.  Why?  It doesn’t say.  He could have been irritating, but, one thing is for sure, we’re not doing Jesus’ will.  And thank God Bartimaeus actually shouts out even more loudly, “Son of David, have mercy on me!”

Then Jesus stands still and says to us, “Call him here” (Mk 10:49). Jesus is asking us to be intermediaries, not because He needs our help, but in order that we can share in His reaching out to people.  So, the key word today is ‘solicitude.’  Jesus is solicitous, that is, He cares for all people, particularly for those in need, whether it’s a physical or spiritual need.

Part of being a saint is having a missionary heart. We can’t help every single person in our life, but do we have a heart for them?

Once, when St. Mother Teresa was in Rome, she and her Missionaries of Charity were going to meet the pope.  But, along the way, Mother Teresa saw a man in need.  When one of the sisters said, “Mother, we are going to be late to meet the Holy Father,” she replied, “Tell him I am helping Jesus.”

In our lives there are people sitting by the roadside, perhaps they’re struggling with loneliness, poverty, mental illness, lack of faith, or some other need; and every day we run into people who are hurting. Jesus says to us, “Call them here,” in other words, help them in their need and bring them to Him.  Are we solicitous concerning them?  As a parish, are we solicitous?  Churches have a natural tendency to turn inwards in focus.  Most of our ministries are designed to help ourselves rather than people outside the parish—we’re lacking that missionary heart!

Last November, we started a Works of Mercy ministry, and, unfortunately, it hasn’t gone as planned.  I apologize that everyone who signed up didn’t get a phone call in a timely manner as promised.

However, there is one thing on which we’re now ready to act.  We asked everyone if they would support giving ten percent of our collection to those in need.  (Why?  Because it’s the way Jesus lived, giving until it hurts, that is, sacrificially.  It’s the right thing to do, not just give out of our surplus, but what we ourselves could use.)  The overwhelming majority supported this; only seven people had reservations. 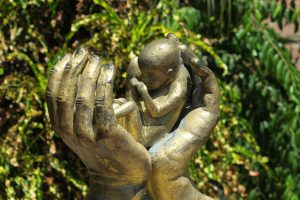 Since we can’t help everyone, here are four principles which will guide our giving:
1) We cannot give money to organizations whose actions go against the moral law.  So, for example, we may want to support research for cancer, but we can’t support groups that do embryonic stem cell research, because that involves the killing of embryonic human beings.  We want to help the poor, but we can’t support United Way, which supports abortion.

Many of us may never have heard of such guiding principles, but they are logical. We all have moral principles that guide how we use our money.  I have a friend, for instance, who won’t visit the U.S. because of the current government; while I disagree, I understand that he’s making a statement with his money. And so must we.  Last year, Archbishop Miller withheld money from CCODP, the Canadian Catholic Organization for Development and Peace, because they are embroiled in scandal and have been heavily accused of supporting groups that go against Church teaching .

2) Generally speaking, we should give top priority to Catholic charities.  This doesn’t mean we don’t support non-Catholic ones, but just recognize the reality that Catholic charities are typically dependent on Catholics alone.  In the same way, we should favour groups that don’t get any government funding because if we don’t support them, no one will.  Also, the beautiful thing about good Catholic charities is that they also help the spiritual needs of people and share Jesus with them, which is the greatest gift we can give to any person—evangelization.

3) Are there some causes that are more important than others?  It’s impossible to rank perfectly all needs, but there are some that are foundational.  The right to life, St. John Paul II taught, is the foundational right (Evangelium Vitae, 2). Without this right, no other right matters.  Or, let’s try unemployment—this is a very painful reality for many people; it was for my family for years.  Nevertheless, we must admit that getting the basic necessities for survival comes before getting people a job.

This, of course, is all in the abstract.  Since we can’t do everything, we need your help in discerning whom concretely God is putting into our lives.  If a number of people, for instance, suggests helping local victims of domestic violence, then perhaps God is guiding us there.

4) That leads to number four.  We should be solicitous in regard to our local community, because God has put us here to help them.  It’s our duty, not anyone else’s.

So please pray about this, suggest some causes, and then the Works of Mercy group will vet them, then the Finance Council, and then the Senior Leadership Team.  Subsequently, we’ll announce where we’re giving the money. 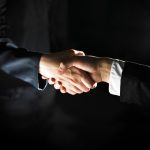 Two other things:  In our Canadian culture, it’s polite and a sign of respect to shake hands when we meet people or during the Sign of Peace.  This used to be common in all our Catholic churches until SARS broke out here in 2003 and we stopped shaking hands for good reason.  But, unless we have a good reason not to extend our hands, for example if we have a cold, etc., it’s a virtue to follow this social practice.  I’d really encourage everyone to overcome our unease, shake each other’s hands, and then wash them right after!  How open is our heart?

For me, one of the most beautiful things about the Blind Bartimaeus passage is, once his blindness is healed, the grateful recipient chooses to follow Jesus “on the way” (Mk 10:52). He’s healed of his blindness and then becomes a disciple of Jesus.  This is our ultimate hope when we as a parish love people. 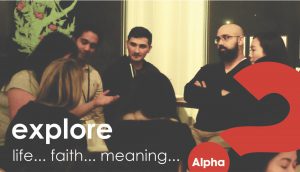 When I was in England last month for the Alpha conference, they took us to a dying church in a rough London neighbourhood that was being re-evangelized. With a new young pastor who has a missionary heart, in two years they’ve had an incredible impact on the community:  They feed the poor every week, help single mothers, have bins where individuals can drop off knives used to attack people, and they go crazy with Alpha; they invite everyone, all the time!  They’ve even partnered with savvy business people and started a parish brewery—no joke!  Why? Because, following the monastic tradition where monks entered a local community and met the needs of the people, the pastor felt that a brewery would be a place where the community could gather and hear the Gospel.

We even met one simple, 5’2” man named Mark who used to be part of the English mafia.  Having been raised by nuns, he told us how he was beaten by a mean one, and how he fell away from God.  But, in just over a year, he has come back to God.  Alpha has helped him, and now he’s helping serve the poor every week.  The pastor told us that a third of his congregation is filled with people like Mark, people in need who were helped and are now following Jesus on the way.  This is a community that loves people sitting by the roadside.

God ignores no one. He has a missionary heart and is solicitous for everyone.