This is Angelo Roncalli, in the centre, an Italian seminarian in 1901.  Note that he’s young and healthy.  He was ordained a priest at the young age of 23, and was healthy enough that he was made a military chaplain in World War I. 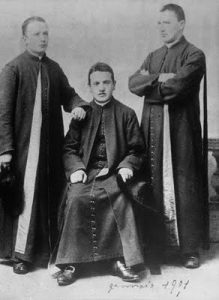 At the age of 57, however, after putting on a lot of weight, he wrote in his journal: “In December… I received a grave warning about my physical health.  I took the necessary measures at once; a year later I feel much better, although I see signs of old age in my thinning hair.  I must always keep myself familiar with the thought of death, not to sadden myself but on the contrary to fill with wisdom, joy and calm the span of life that still remains for me here below.  But what an obligation this is for me to seek more earnestly to sanctify myself” (Journal of a Soul, 286).  Some of you know that he was elected pope in 1958, and became St. John XXIII.  So even saints get wake-up calls!

God allows us to grow old to wake us up and get us ready for death.  We’re called to eternal life, but get distracted by the good life we have here.  So, in His goodness, He allows us to get stiff, put on weight, have wrinkly skin, and lose hair.  Anyone here losing their hair?  No one.  God bless you.

Wake-up calls are gifts, because they focus us on reality!  In the Gospel, Jesus gives us two wake-up calls to the reality of death and judgment, not to sadden us, as St. John XXIII said, but to spur us on to sanctity!

“Eating and drinking” are used here as signs of a carefree, foolish life.  Noah is a symbol of those who faithfully and lovingly respond to God, while the world is punished for not loving Him.  The idea that judgment comes while people are working “in the field” or “grinding meal together” means that it will happen on a regular day.  So, Jesus tells us to “keep awake,” always ready for death and judgment.

You know why we don’t like to think about judgment?  It’s because we could be guilty!  My high school chemistry teacher said, “The only people who don’t like tests are those who aren’t ready for them.  People who are ready look forward to doing well!”

And as we pointed out in March 2019, being a ‘good’ person is not enough to enter heaven, to pass the judgment, for three reasons: 1) What does it mean to be good?  Good according to the Bible, or good according to Canadian standards, which means being nice, but allows us to be selfish and not have to stand up against evil?  And how many of us can say we always obey our conscience?  I can’t.  2) Everyone needs a saviour, because we all sin and all need to make up for it, but we can’t, so Jesus will do it for us, if we respond to Him in faith and love.  3) Heaven is being with God the Father, so, to be in heaven means loving the Father, not just being good.

2) “But understand this: if the owner of the house had known in what part of the night the thief was coming, he would have stayed awake and would not have let his house be broken into.  Therefore, you also must be ready, for the Son of Man is coming at an unexpected hour” (Mt 24:43-44).  It’s interesting that Jesus compares His coming to something negative, like a “thief.”  It’s because judgment has a positive and negative aspect to it.  He will judge fairly, but it’s not something to be taken lightly, which is why He says, “You also must be ready.”

We’re now beginning the liturgical season of Advent, which consists of four weeks of preparation for Christmas.  ‘Advent’ means ‘coming,’ and St. Cyril of Jerusalem teaches that we celebrate two comings of Christ: first, His coming as a baby, when the second Person of the Trinity took on human nature and was given the name, ‘Jesus’ (Office of Readings, 1st Sunday of Advent).  This coming is to reconcile us with the Father.  He’s trying to win us, and His proposal is urgent.  The second coming is what we profess in the Creed: “He will come again in glory to judge the living and the dead.”  This is the wake-up call.

I’ve been praying and thinking about this wake-up call for over a year.  As Catholics, we tend to get complacent in our evangelization focus.  Jesus came to win us back and did it with urgency, but we lack that same intensity.  So, I’ve been thinking: How do we grow in that sense of responding to Him and helping others respond?  What God’s led me to is using Alpha as our chosen evangelization tool and trying to root its virtues more deeply in the parish.  What we’re doing is starting a new season for the next month and a half called Alpha as Culture.  Alpha, as many of us know, is this great 12-week program that helps us encounter Jesus: It’s loving, respectful, and winsome.  It’s meant for all of us so that we can choose to follow Him, but especially for people who have never really known Jesus.  There have been so many conversions through Alpha here and around the world, which is why it’s a global program.

There are seven best practices of Alpha on which we want to focus, one for each Sunday:
1) Prayer
2) Hospitality
3) Listening
4) Evangelistically positioned (that is, reaching out to people)
5) Alpha talks (which means encountering the person of Jesus)
6) Alpha Weekend
7) Training

Alpha as Culture means we live these virtues of Alpha throughout the parish.  For example, we aren’t just hospitable when we run Alpha, but breathe hospitality all the time!  Going through these seven practices is very similar to what we did last Advent and Christmas, as we got ready to invite people to Christmas Mass.

Today, we’re focused on the importance of prayer for other people.  Alpha is designed to fail if God doesn’t show up, meaning it’s dependent on Him.  Without prayer, it’s just good videos with conversations.  But when the Holy Spirit’s the principal mover, there are conversions of heart.  During Alpha, the 124 members of our Intercessory Prayer Ministry pray for the leaders and guests, while the Alpha Team itself prays daily for the guests, with hope and expectation that people will meet Jesus.

Today, we want to pray for the people we love and who haven’t yet encountered Jesus, and we’re going to use what’s called the 11:02 Prayer.  This is based on Luke, chapter 11, verse 2, where the disciples ask Jesus how to pray, and He teaches them the Our Father.  We write down the names of people we love, set an alarm on our phones at 11:02 a.m. or p.m., and pray for them then.  In your pews are the cards.  Start thinking about it now.  It’s people in our lives with whom we have a friendship.  Ask the Lord to reveal for whom we should pray.  Here’s an improvement from last year: There are two halves to the cards.  We write down the same names on both halves, one of which we place underneath the altar, just like last year.  This is based on the book of Revelation, where the souls of martyrs are underneath the altar in heaven, and it’s a sign of bringing our loved ones close to Jesus’ sacrifice at Mass.  The second half of the cards we take home, and pray for people daily at 11:02 a.m. or p.m. depending on what’s good for you.  And if you’re at Mass at 11:02 a.m. then do it right after or before!  If at work, then it just takes one minute of intentional, heartfelt prayer.

Here’s a two-minute Alpha video that gives us the spirit of Alpha.

Now, let’s go even a step deeper than last year.  I want to teach you how to offer your works and sufferings, that is, your actions, for other people.  I heard a story about a cardinal in Rome who had strong temptations against faith.  One night, he had a vision of a Poor Clare nun and felt free of his doubts!  A few months later, he visited a Poor Clare monastery and, while distributing Holy Communion, saw the sister he had seen in the vision.  Afterwards, when he met her, he asked, “Do you pray for cardinals?”  She was embarrassed, “Oh, not enough, Your Eminence, only as I fold my laundry every night” (Sr. Mary Gabriel, SV, Power in Prayer, Track 9).  Can you believe that?  She would fold her laundry with love and intentionally offer that love for cardinals and that freed one of them from doubt.

That’s how it works: In whatever good we do, we pray, “Lord, today I’m going to offer the love with which I do my house chores, my homework, my work at the office, etc. that people for whom I’m praying may come to know You.”  Can we do this daily at 11:02 a.m. or p.m., please?

In three weeks, we’re going to talk about how to invite people in a loving way, and this year we want to focus on inviting to Alpha on January 9, 2020.

Jesus is waking us to the reality of judgment and being more outward focused.  When our Mother Mary appeared in Fatima, Portugal, in 1917, she said these famous words, “Pray, pray a great deal, and make sacrifices for sinners (which includes us!), for many souls go to Hell because they have no one to sacrifice and pray for them.”  We’re all getting older, and could die before Christmas and lose an opportunity to invite, or the people we love could die within a year.  Christmas is coming and now’s the time to pray for the conversion of others.  I’m really looking forward to this season!  All the preparation has made me more aware of the people around me and the people I meet on the streets.  I’m praying for and already inviting them in a new way.

Remember St. Monica: She prayed with tears for her son for 15 years before he came back to Jesus.  I thought about this because on the day her son, now St. Augustine, finally came to believe, he opened up the Bible and read today’s Second Reading (St. Augustine, Confessions, Bk. VIII, no. 29, p. 152), which is about waking up to Jesus!

Now we’re going to take four minutes to pray, reflect, and fill out the cards while Chris plays a piece called Prayer of Our Lady.  You don’t have to write down ten names before handing them in.  Once we’re done, we’ll place them in the offertory collection and the ushers will kindly separate them.  And please set a timer on your phones.  Wake-up calls are gifts.