Most of my early life, I ran away from responsibility: I procrastinated on homework; and if I didn’t get it done, I would make excuses.  I never got a job, and the only chore I ever did was clean the house.  I learned this from my father.  Don’t get me wrong, I love my father, and he loved me—that was his greatest gift.  He also taught me to love classical music, encouraged me to play sports, and to stand up for the little guy.  But I imitated him in running from responsibility.  When I met Christ, that’s when I wanted to be better, to be perfect like Him.  I started learning responsibility from the young male core leaders at LifeTeen and from the monks at Westminster Abbey.

I think I’ve neglected my responsibility as pastor because I haven’t been completely candid about speaking Christ’s truth to the men in our parish.  So, I’ll try to do so today with love.

When I arrived here six and a half years ago, to be honest, I recognized that most men in our parish, not all, didn’t appear to be strong.  For every five women that came to a spiritual event, only one man would come.  Many were passive, shy, and showed no passion for God.  I don’t want this to hurt you, but many haven’t been entirely spiritually responsible.  And now we see it in some young men here, who are passive, self-focused, lack confidence, and look somewhat defeated.

It is true that, in every religion and in almost all parishes, women are more devoted than men.  But there are local parishes stronger than we, where the men lead prayer and spiritual ministries, go to Confession and daily Mass more, mentor young men in faith, and live bold Christian lives.  I’m not the only one who sees this: other priests and people who visit different parishes see this.

I apologize for not bringing this up earlier.  But the great news is that I can bring it up now because you’re ready for it.  There’s been a lot of growth: increased participation at Mass and Confession, more involvement in spiritual ministries, and men tell me they like to hear hard truths—that says a lot!

Let’s go to the Gospel to see what kind of men Jesus is calling us to be.  He says, “I am the good shepherd.  The good shepherd lays down his life for the sheep.  The hired hand, who is not the shepherd and does not own the sheep, sees the wolf coming and leaves the sheep and runs away” (Jn 10:11-12).  Jesus is the perfect man, the perfection of masculinity, and one of the marks of masculinity is that a man sacrifices himself so that others can live.  Of course, all Christians are supposed to sacrifice themselves for others (Cf. Jn 15:13).  But, because men are on average biologically larger and stronger than women, their sacrifice is usually in the form of protection.  A man should be ready to protect physically his family, younger siblings, and groups of people. (And if anyone misunderstands that women should only be helpless and rescued, go watch some of my favourite movies, Aliens, The Hunger Games and A Quiet Place, where the woman is clearly the hero, but the men are all responsible.)

Jesus distinguishes the shepherd from the hired hand.  We see from this that there are two choices: die to protect others, or run away.  For men this choice is between being a protector or predator.  Either we use our strength to give or take life.  But a third option is being a wimp, where a man doesn’t help or hurt, but gives up, is indifferent.

The choice to sacrifice oneself is primarily spiritual.  Men usually provide for their family’s physical and material wellbeing, but Jesus’ example tells us that the man must provide primarily for the spiritual and moral wellbeing of his family.  At the most vibrant parishes, men work hard at their day jobs and then come to the parish to help others.

This choice to sacrifice ourselves also seems to be a predominantly male reality.  Women typically are more responsible than men.  When a parent leaves a relationship, it’s usually the father, while the woman takes care of the children.  That’s also why we don’t see as many young women as lost as young men; they don’t stay home all day playing video games.  Perhaps this is because women have an innate sense of motherhood; every month, their bodies remind them that they’re able to give life to a child.  Men don’t have this biological reminder.  That’s why boys, in order to become men, have traditionally had rites of passage where they choose to become men.

In our culture, young men have steps in maturation that we celebrate: volunteering, getting a driver’s license, getting a job, helping their younger siblings, asking a girl out, buying a car, living on their own.  We don’t have to do these things and help others, but Jesus says, “The hired hand runs away because a hired hand does not care for the sheep” (Jn 10:13).  When we care about people, we take responsibility for them.

In marriage, fathers have to choose to assume a sacrifice equal to what their wives are enduring.  When women are pregnant, they often have to endure periods of pain leading up to the pain of labour.  So men must choose to do more to share the responsibility of parenthood: more work, more chores, always helping their wives.  That’s where we become like Jesus.

Jesus says, “I am the good shepherd.  I know my own and my own know me, just as the Father knows me and I know the Father” (Jn 10:14-15).  Jesus knows us because we belong to Him, we are His sheep.  He possesses us, not like things, but as friends and family belong to each other.  Pope Benedict XVI says that children and parents “belong to each other… in mutual responsibility” (Jesus of Nazareth, Vol. 1, 281): parents take responsibility for their children and children grow in taking responsibility for their parents.  And Jesus says that the way He cares for the Father is the way He cares for us (Cf. Jn 17:); that’s why He lays down His life for us.  “For this reason the Father loves me, because I lay down my life in order to take it up again” (Jn 10:17).

The more we think about how much we love our family, the more we’ll lay down our lives for them.  And it’ll be done willingly.  None of us is forced.  That’s the beauty of choosing responsibility—if we freely choose it, then it’s a sign of love.  Jesus says, “No one takes it from me, but I lay it down of my own accord. I have power to lay it down, and I have power to take it up again.  I have received this command from my Father” (Jn 10:18).

Next week, I’ll be away for one week of rest.  This is my last opportunity to invite you to two events.  First, think about the people you love who don’t know Christ.  Take responsibility for them and pray for them.  If you can, invite them to Alpha this Wednesday and Thursday.  It’s our responsibility to help them know and love Jesus.

That’s our question for reflection today: “Jesus, where in my life do You want me to take more responsibility for others?”

Second, we start the consecration to Jesus through St. Joseph on May 8.  I believe this will be a game changer for our parish, because we’re going to do six weeks of reflection on the love of the Holy Family: We’re going to look at their example, talk to them, ask for their help, so that our families can become happier.  I am on my knees asking you to buy this book and join your parish family in growing.

This is Kendrick Castillo: 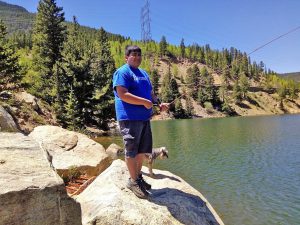 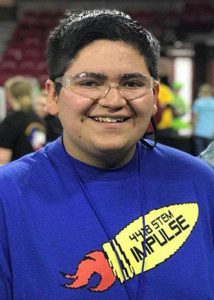 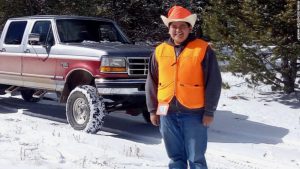 In 2019, in Colorado, when he was 18, he charged at a gunman in his classroom, pinned him to the wall, saving all 28 students, but the gunman got off one bullet and killed Kendrick.

Let me now share portions of what Kendrick’s father, John, wrote: “I remember how happy we were when the time came to have [Kendrick] baptized and to introduce him to Christ and His Church.  I loved Kendrick so much…  I spent so much time with him…  We went camping… fishing… hunted deer and elk… And we went to Mass.  I was reliving with Kendrick the life I had with my father, and this is the beauty of having a strong father figure in one’s life” (Tyler Rowley, Because of Our Fathers, 33).

“Kendrick was an altar server and helped the priests with funerals.  He took great joy in helping people…  Picnics.  Holiday gatherings.  Kendrick helped with it all.  The guys loved him.  Oftentimes Kendrick would listen to the veterans tell war stories.  Kendrick was so impressed with their patriotism and service to our country, along with their strong faith.”

“There were times when my wife would call me at work, ask if I was very busy, and tell me that I should take some time to grab a Happy Meal and go eat lunch with Kendrick.  I would always take her up on the suggestion and show up unexpectedly at school…  That type of stuff is so important…  We should take more time to thank God for the life and blessings He has given us…  Thank you, God.”

“I know this is a story about fatherhood, but I must tell you about my wife, Maria.  She is the one who gave Kendrick his amazing heart…  When he was a baby, she would do all the things mothers do… dress him in nice clothes, teach him to talk, read him books, put on videos like Veggie Tales…  She also played a major role in teaching Kendrick about his Catholic faith.”

“Our lives… have changed in a significant way since Kendrick died…  To be perfectly honest, the hardest part for me has been to see my wife’s pain.  I just pray that I am strong enough to carry us both through this life until the day we meet Kendrick again.  The special bond I shared with Kendrick sometimes makes me think of the two gunmen and their fathers…  Shooter A regularly witnessed his father beating his mother, when his father was around at all… Just eleven days before the attack, Shooter A tweeted that he missed his father.  In fact, Shooter A was… a biological female who ‘transitioned’ in high school…  As for Shooter B… before leaving his house to kill his classmates, he spray-painted ‘F— Society…’ then doused his mother’s car with gasoline and set it on fire.”

“I was not surprised when I learned about what Kendrick did.  His whole life led up to that moment…  [He] absorbed all the good things he and I had been raised with, all that he had been taught by strong and faithful Catholic men, positive father figures who loved God.  In one split second, Kendrick summoned up all he had learned in his life in order to protect his friends and save their lives.  Kendrick was doing what his grandfather, father, mother, and Church taught him.  He was being like Jesus…  And there is no greater love than that.”