St. Teresa of Avila, a 16th century Spanish nun, writes about seven mansions of the spiritual life.  Describing the soul as if it were a castle of diamond or crystal, in which there are many rooms or mansions, with God’s dwelling place in the centre (Kieran Kavanaugh, St. Teresa of Avila, Collected Works, 270), the mansions describe the spiritual progress we can make. 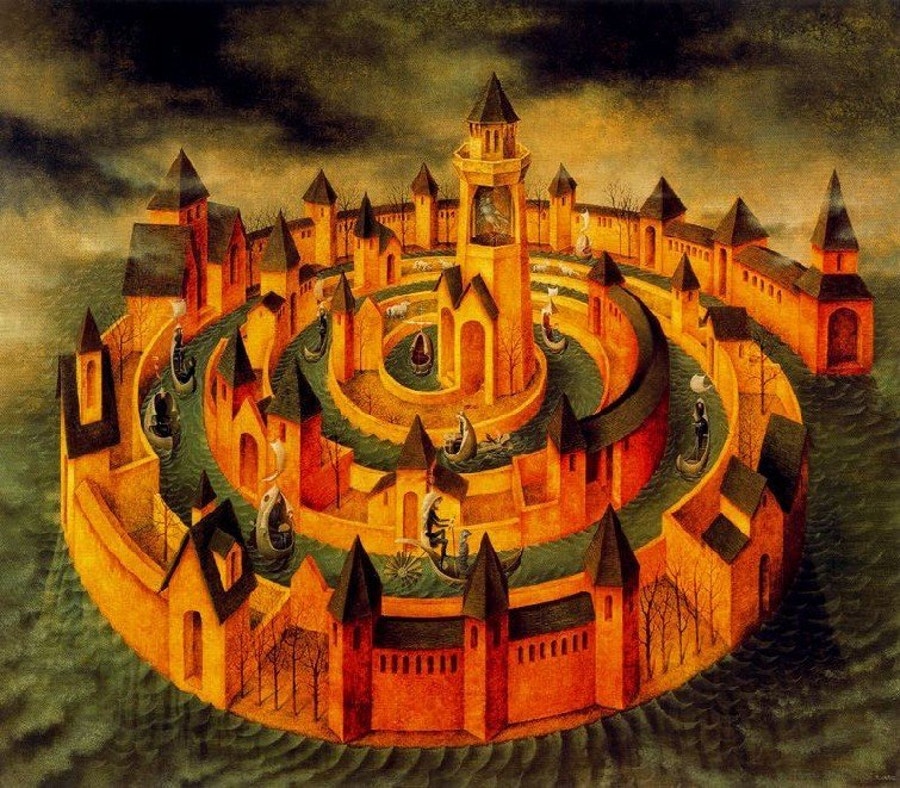 The following is a description of the mansions, not comprehensive, but relevant to us: People in the first mansion are those who have good desires, are in a state of grace, and sometimes pray, but are distracted by possessions, honour, and busyness; and are attracted to sin.

In the second, people start praying more regularly; they read spiritual books, listen to spiritual talks, have friends who are disciples, and persevere through trials because they sense that one can’t just follow God when there’s consolation.

In the third, people reach a kind of spiritual stability: praying faithfully, conscious of avoiding even venial sin, using their time well, and are generous in works of charity towards their neighbour.

These three mansions are about turning from sin and reaching a well-ordered Catholic life (Ralph Martin, The Fulfillment of All Desire, 13).  The fourth to seventh are where prayer becomes more passive and God works more directly on the soul.

In the fourth mansion, the person enters ‘the prayer of quiet,’ in which the will is fixed on God and finds deep joy, even though the mind may wander.

In the fifth, the mind also becomes absorbed in God and is suspended, that is, it isn’t aware of what’s going on around it.  At this level, the soul dies to all unhealthy attachments (Kavanaugh, 296).

In the sixth, God touches the soul with many graces and trials to build up courage, so that it seeks Him no matter what; its desires of love increase exponentially so that it longs for God and nothing else.

Finally, in the seventh, the soul is married to God, has an intellectual vision of the Trinity, and can’t be separated from them.

When we hear this spiritual teaching, it’s possible to get discouraged because we’re so far from the destination, but discouragement is useless.  Realize that St. Teresa herself lived a life of frivolity before becoming a nun, and was lukewarm for the first part of her religious life, and didn’t even pray for two years while ill and depressed.  Her life gives us all hope.  And she points out that, if we want to reach the seventh mansion, God will give it to us, because He wants it, too.

So we ask: How do we get there?  The answer on which we’re going to focus is learning from the best.  When we reflect on the First Reading about Pentecost, we’ll see that the disciples learned from Mary, and this is what helped them receive the Holy Spirit.

Even though Mary isn’t mentioned in the First Reading, we know she’s there because she is mentioned some verses before: “When they had entered the city, they went to the room upstairs where they were staying, Peter, and John, and James, and Andrew, Philip and Thomas, Bartholomew and Matthew, James son of Alphaeus, and Simon the Zealot, and Judas son of James.  All these were constantly devoting themselves to prayer, together with certain women, including Mary the mother of Jesus, as well as his brothers” (Acts 1:13-14).

But what was Mary doing?  Biblical scholars tell us that these verses are what’s called a ‘summary statement,’ meaning the author is trying to tell us something and Mary isn’t there by accident (Raymond Brown, Karl Donfried, Joseph Fitzmyer & John Reumann, Mary in the New Testament, 173-177).

Acts of the Apostles is the second part of St. Luke’s work, the first being his Gospel, and there are four parallels between Pentecost in Acts and Jesus’ Conception in the Gospel (Bertrand Buby, Mary of Galilee, Vol. 1: Mary in the New Testament, 100-101):

1) Both events happen at the beginning of their respective stories.

2) Both events announce the Holy Spirit coming on people: Mary was told, “The Holy Spirit will come upon you” (Lk 1:35), and the disciples are told by Jesus, “Within a few days you will be baptized with the Holy Spirit” (Acts 1:5).

3) Both events lead to giving birth, the first to Jesus’s physical body, and the second to the Church, His mystical body.

4) Both events lead to mission: Jesus’ mission to redeem us, and the apostles’ mission to proclaim His redemption.

St. John Paul II realized that if Mary had already received the Holy Spirit in a special way, she was in a unique position to help others receive it.  At the foot of the Cross, Jesus told her that she was to be the mother of all disciples, so now, at Pentecost, when the disciples are praying (Lk 1:14), she was teaching them, because she had already been described as a model of prayer (Lk 1:46-55; 2:19, 51).  So, they were learning from the best teacher how to receive the Holy Spirit.

This is the third week for those of us doing the consecration through St. Joseph, and it’s focused on Mary.  One meditation mentions how St. Joseph watched his young wife give life to Jesus: she bore Him, loved Him, nursed Him; she gave everything to Him in their simple family life, and St. Joseph learned from that.

So, pay closer attention to two groups of people: virtuous people and the saints.

1) Right now, think of three people you know that are ahead of you in the spiritual life, three people you admire.  Can you think of them?  People start coming to mind.  Have you ever thought about imitating them?  God put those people in your life for a reason.  It’s not by accident that they’re with you.  Have you ever thought about asking them about their spiritual life, how they grew in a certain virtue?  Imitate their virtues.

2) Learn from the saints.  When I read what St. Teresa of Avila has written, I don’t become discouraged.  Trust me, I’m not at the seventh mansion!  But I learn from her to be less distracted and more focused in prayer, not to let people’s faults bother me as much(!), to focus more on sacrifice and penance, and to dispose myself more fully to God’s bringing me to higher stages of prayer.

Pray the Rosary, because we learn from Mary what she learned from Christ.  When we pray the Rosary, we’re watching Christ in action: how He loves, responds, speaks, acts.

For a hundred years, everyone knew that St. Thérèse of Lisieux was a saint and reached the seventh mansion by the time of her death at age 24.  (Don’t confuse St. Thérèse with St. Teresa.  St. Thérèse was a French nun in the 19th century named after St. Teresa, the 16th century Spanish nun.)  But, it’s only in recent decades that the world started to recognize the holiness of her parents, Louis and Zelie Martin, who were canonized in 2015.  Sts. Louis and Zelie put their family first, even though he was a jeweler and she ran a lace business.  St. Zelie said, “We lived only for them.  They were all our happiness”.  They taught their five surviving daughters to go to daily Mass, how to pray, practice self-discipline, and be generous.  St. Louis would read to them from a book on the liturgical year.  And there were lots of celebrations in this family: games, story-telling, and feast days.  The girls learned about God’s love through the endless affirmation, hugs and kisses that their parents gave.  They also learned about His call to perfection through their correction.

Saints learned from saints.  Focus on them and on the virtuous people in your life.  Learn from the best.