The First Reading today tells us not to fear in spite of overwhelming odds, and that God the Father will heal us.  I’ll share two stories having to do with residential schools, because God the Father’s ability to take away fear and grant healing is particularly powerful in connection with these horrors.  And then we’ll finish off with two action items for ourselves.  (By the way, we’re also touching again on residential schools because the healing isn’t completed, and, as we said in June 2021, we want to speak about what’s important, even when it’s not in the news cycle.)

First, Chief Kenny Blacksmith was taken from his mother when he was five to the La Tuque Residential School in Quebec, run by the Anglican Church in 1963, then by the federal government in 1969.  There, siblings were forbidden to talk and see each other, “children were lined up by age and given army-style haircuts—those who resisted were punished.  They were immediately forbidden from speaking their native tongue, Cree, on pain of punishment”.

And here are some more details of their suffering, because it’s important for us to face the truth, and know that God can heal.  Moreover, keep in mind that this isn’t the worst of it.  In an interview, Blacksmith said, “I remember one time speaking in Cree, and the counselor came, slapped me on the back of the head… and made me stand in front of the whole group with both arms extended in front of me and a stack of trays were put on my arms… Every time my arms lowered, the counselor… smacked me on the back of the head…  At night, you could hear the whimpers…  The counselor stayed at night… and made sure everyone was quiet.  It was in the silence and covering of the night that we would be sexually molested.  I remember quietly talking to each other of running away, but we didn’t know where we were.  Some did try and were brought back by the police and punished. Everyone was included in the punishment.  I remember one time we had to scrub the hallway in our dormitory with our toothbrushes.”

He returned home at 17, but his relationship with his mother was broken, given that he had been away for eleven years.

Yet, he had a remarkable resilience: He resolved not to lose his identity, and sought to learn more about his culture.  Furthermore, during the time he was at the school, his mother had become a Christian, as had many in her community.  He said, “Seeing my mother so happy and full of new-found hope, healing, and freedom, she began to press upon me a much-needed new relationship with the God of all Creation.”  Naturally, he resisted, given his horrible experience with anything related to Christianity.

But, after his mother died, and due to the witness of her unconditional love, something spiritual happened while Blacksmith was hunting.  “I had an impactful encounter with God as a loving Heavenly Father…  There was no pressure, just a total succumbing to the power of His love.  I realized then that God was not a white man’s God or the only expression of faith in Him.  I found God could speak my Cree language and it was okay—to be Cree and still follow, believe, and serve in His love for all others.”

God says in the First Reading today: “Say to those who are of a fearful heart, ‘Be strong, do not fear!’  Here is your God.  He will come with vengeance, with terrible recompense.  He will come and save you” (Is 35:4).  These words were given in the 8th century B.C. to the Jewish people, one of many small kingdoms, who were in danger of being wiped out by the huge Assyrian empire.

And these words apply to all people in a disadvantaged position today: to the First Nations people who are suffering; to some of us Catholics who are afraid of living our Catholic faith because so much of what we believe is politically incorrect; and to people of goodwill who are afraid of speaking the truth.  Chief Blacksmith’s story shows how God can heal, and can give him the courage to say the following:

When asked about what Canadians need during this painful time, he speaks two truths, one painful and one consoling.  First: “The early church’s mission to Christianize the savage was demeaning to say the least…  The ‘Church of Canada’ took part in… genocidal, ethnic cleansing, dark, cold, evil, wrongful assimilationist policies of the governments…  In this way, the ‘Church of Canada’ tarnished the image of a loving Heavenly Father…  We must own up to our respective failures.  We must be determined and convicted to make a wrong right…”

Second: “God is a good God.  God heals.  God frees the captive from a negative past of sin.  God forgives.  God gives life, and more…  Forgiveness is not political.  Forgiveness is spiritual…  Let’s give God a chance – He knows how to make things better.  Canada belongs to God.”

Our second story of God’s power and His exhortation not to be afraid is from Fr. Cristino Bouvette, of the diocese of Calgary, and his indigenous grandmother. 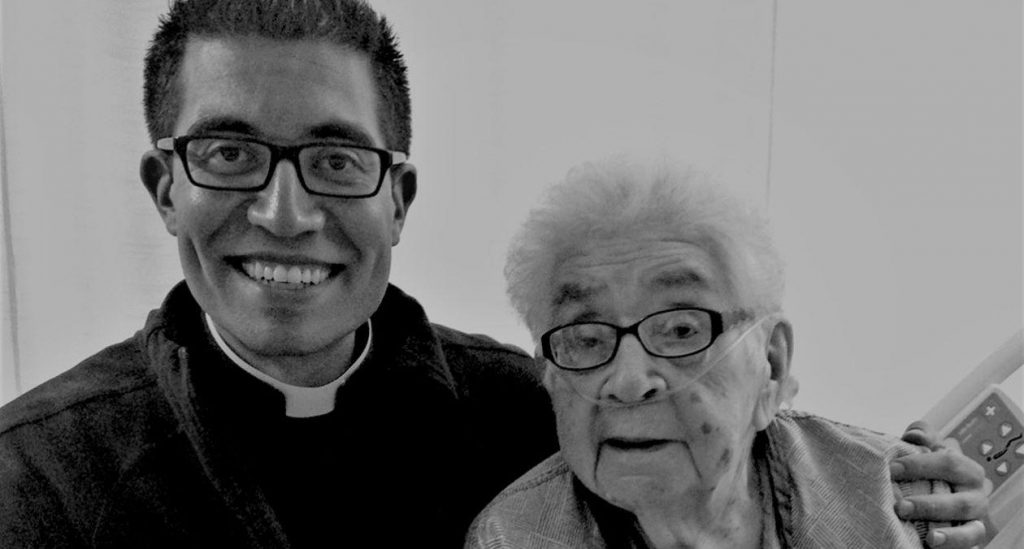 Father wrote a strong, intelligent homily June 16, 2021, in which he recounted the time when he was in the seminary and asked ‘Kokum,’ the Cree word for grandma, “Kokum, based on your experience of residential school, does it offend you or worry you that I might become a priest someday?”  She had suffered indescribable pain at a residential school, but, at the moment of his question, she paused, closed her eyes, grabbed his hand and responded, “Oh my boy, nothing would make me more proud.  I have known many good nuns and priests, and I know you would be one of those”.

Fr. Cristino writes, “Though never a Catholic herself, she was first and foremost a devoted Christian and student of the Word of God.  She overcame more suffering in her 99 years and 11 months of life than anyone in our modern times could even fathom confronting.  And she did so, by her own unapologetic declaration, because of her faith in Christ.  That faith, however, was not imposed upon her by residential school teachers.  That faith was handed down to her through three generations of living a truly reconciled life of Indigenous heritage and Christian confession.  Her great grandfather was one of the first ordained Natives in what was still not-yet-Confederated Canada.”

Being strong and not fearing mean that, even if our family and society think following Jesus is offensive, we still must follow Him, while showing respect for those who disagree.

At the end of his homily, Fr. Cristino had the courage to state a fundamental Christian conviction: All people deserve to hear the saving Gospel of Jesus Christ.  In fact, people have a right to hear about Jesus, and we shouldn’t be afraid to proclaim Him joyfully and lovingly.

St. Paul VI wrote in 1975 that our respect and esteem for people and their religion are not a reason to be quiet about Jesus.  On the contrary, people have a right to hear about the Person Who made them, loves them, and offers them redemption (Evangelii Nuntiandi, 53,2).

So this is our first action item: Don’t be afraid to invite your friends to Alpha and The Marriage Course!  Love them, pray for them, listen to their needs.  And, if you see their hearts are open to exploring if there’s more to life, then invite them.  The Holy Spirit is working in everyone’s life right now, and we’re asked to cooperate and make the invitation.  Don’t worry about their response.  Our job is simply to invite.

Secondly, the federal election is on Monday, September 20, 2021.  As we talked about before, for Catholics, it’s a moral obligation to vote, because it can help our country greatly, and because people fought to give us this right.  Therefore, not to vote, for no legitimate reason, is a sin.

Furthermore, there is a hierarchy of values according to which we should vote.  We should always vote according to what can do the most good.  St. John Paul II taught that the right to life is primary because without it, no other right matters.  In Canada, there are 100,000 deaths from abortion annually.  Because of this, this is the most important moral issue.  Abortion directly kills (not indirectly like COVID) 100,000 people every year.  If someone could show me that more than 100,000 people are directly killed in Canada through some other immoral action, then that would be our number one issue.

In addition, there’s the family and sexuality issue.  The transgender movement is rewriting reality and confusing children, which includes advocating puberty blockers for children.  In 2020, there was a spike in young women having their breasts removed in order to transition—that is wrong.  As Abigail Shrier noted in her book Irreversible Damage: The Transgender Craze Seducing Our Daughters, “One day, many girls will wake up with no breasts and no uterus and wonder: I was just a teen.  A kid.  Why didn’t anyone stop me?”.

Other issues are important like the environment, the economy, reconciliation with First Nations’ peoples, and we should support whatever is good.  But we need to identify the greatest possibility for good, which begins with human life, sexuality, and the family.  Now some of you, very well informed and attentive to these issues, note that no one’s really worthy of your support.  In this case, we should vote for the least bad candidate.  You must do the research and find out which candidates and parties stand for what.

I’m inspired today to speak more clearly about the truth because Chief Kenny Blacksmith did so at the 2015 Ottawa National March for Life.  Here’s a three-minute clip (please watch: 58:54-1:01:52).