Today, let’s start with the end of Jesus’ parable, because it’s the most interesting and there’s a message for our conscience.  The rich man is suffering in the flames of Hades, not because God sent him there.  He’s there because his conscience knew what he was doing was wrong.  One thing we need to know about life is that not only does God judge us, but our own consciences tell us ‘I shouldn’t have done that.’  More on that later.  The rich man asks Abraham to relieve his pain, but Abraham says there’s a chasm preventing anyone from crossing.

So, the rich man says, “‘Then, Father, I beg you to send Lazarus to my father’s house—for I have five brothers—that he may warn them, so that they will not also come into this place of torment.’  Abraham replied, ‘They have Moses and the Prophets; they should listen to them.’  He said, ‘No, father Abraham; but if someone goes to them from the dead, they will repent.’  He said to him, ‘If they do not listen to Moses and the Prophets, neither will they be convinced even if someone rises from the dead’” (Lk 16:27-31).

Now, the question really is: What will it take for us to believe?  Back then, people were asking Jesus for a sign: ‘If you’re really God, give us more proof.’  However, enough proof had already been given.

There are a few things our conscience tells us we should be doing, but we keep on procrastinating.  Have you ever asked yourselves: When am I going to do it?  What will it take for me to do it?  I’ll give more money to the poor when I retire.  I’ll stop that sin when…  I’ll give my life to God as soon as…

For me, there is one teaching of Jesus with which I really struggle.  It’s not a sin, but it’s something He wants me to do, yet it’s so hard for me.  I won’t tell you what it is because I want some privacy.  But Jesus’ parable challenges me: I know what’s right, I have enough evidence, no more evidence will be given, and I don’t want to be like the rich man.

Jesus sets up the parable so that it’s clear that the rich man knows he should be helping the dying man.  “There was a rich man who was dressed in purple and fine linen and who feasted sumptuously every day.  And at his gate lay a poor man named Lazarus, covered with sores, who longed to satisfy his hunger with what fell from the rich man’s table; even the dogs would come and lick his sores” (Lk 16:19-22).  The rich man has the means of helping (dresses in luxurious clothes (purple, at that time, required expensive dye)), and he wastes food.  He also knows the name of Lazarus, who literally is dying outside his home.

And there are eternal consequences to our decisions and procrastination.  This is not to put unhealthy pressure on us, but it’s just reality.  “The poor man died and was carried away by the angels to be with Abraham.  The rich man also died and was buried.  In Hades, where he was being tormented, he looked up and saw Abraham far away with Lazarus by his side.  He called out, ‘Father Abraham, have mercy on me, and send Lazarus to dip the tip of his finger in water and cool my tongue; for I am in agony in these flames’” (Lk 16:22-24).

One of the most merciful things Jesus does for us is tell us the truth.  Deep down, our conscience judges us—isn’t that amazing?  Something inside tells what we should and should not be doing.  Our conscience is where God speaks to us, and it’s a beautiful voice that wants to help us, but it’s very challenging.

Who here has seen the 1990 gangster movie Goodfellas?  It’s about the real story of Henry Hill who got involved with the mob in Brooklyn.  Because he was dyslexic and failing in school, he was beaten by his father and hated school.  So, he started helping some men in his neighbourhood and they’d give him money.  Later it got illegal when they asked him to sell stolen goods and even blow up cars!  After he got arrested at 16, he tried to get out.  In an interview, he said, “And I realized… they started asking me to do more things for them…  And I said, ‘[Bleep] this.  This [bleep] ain’t right.  I’m getting out of this [bleepin’] business”.  What I’ve always found fascinating about his words is the strength of his conscience.

Let’s just listen to our conscience with these two questions:

1) What action am I doing or have recently done that really bothers me?

2) What am I delaying that I know I should be doing?

When it comes to following Jesus as His disciples, there are two points along the journey that we could be in: 1) We’re still coming to know Him, to know His life, Death, and Resurrection for us.  We know we’re on the right path, but it still needs more time.  2) We already know Him and we do love Him, but, in our conscience, we can feel that we’re holding back in following Him and making Him the centre of our lives.

That’s why this card with the prayer of Pope Benedict XVI is so helpful. 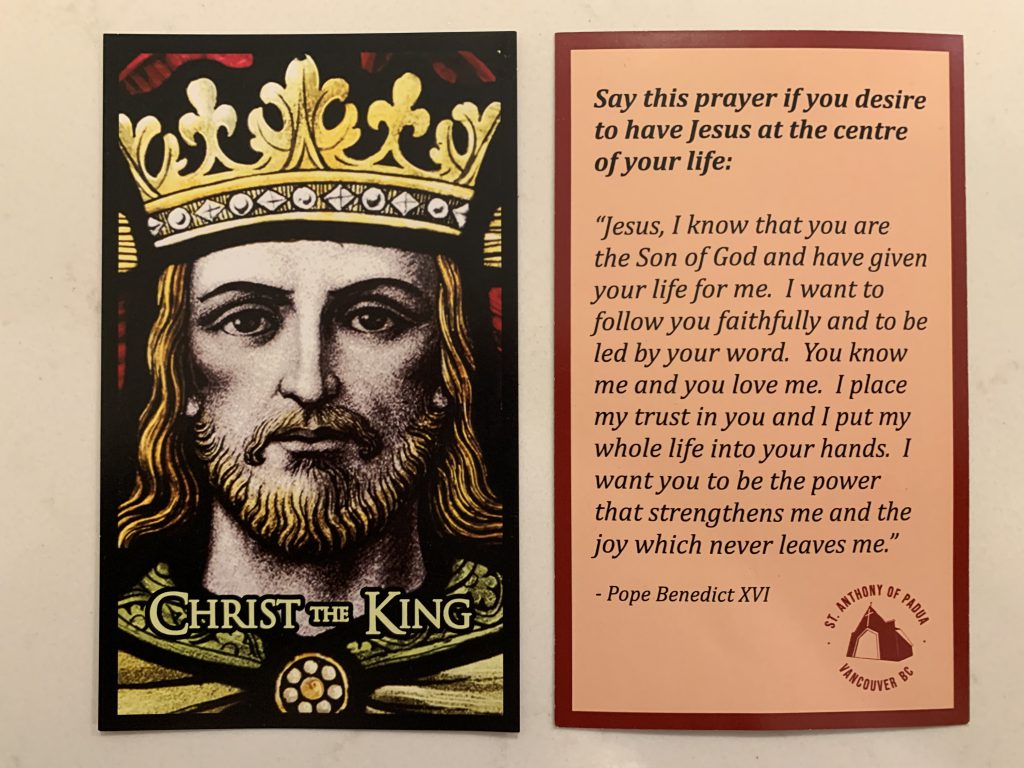 It helps us realize that to follow Jesus and make Him the centre of our lives is a positive choice.  Following Jesus won’t hurt us.  And we don’t have to be perfect, or give up everything we enjoy.  It will give us more than it takes.  It means that we make all decisions with Him in mind: What does He want for me?  Is what I’m doing in line with what He taught?  Making Jesus the centre of our lives is like dating: After dating someone for a while, we know when it’s time to make a commitment.

I feel like St. Augustine.  There was a point in his journey when he was open but reluctant to follow Christ.  So, he went to a priest who told him about a famous Roman teacher named Victorinus, who had become a believer in Jesus because he loved Him, but a secret believer because he feared losing his reputation.  However, after reading the Scriptures, he felt courage, and he feared that, if he didn’t follow his conscience, he would be denied by Christ for all eternity.  Therefore, he made the decision!  When Augustine heard this, he sighed and felt in his heart: That’s what I want to do; I want that freedom (Ralph Martin, The Fulfillment of All Desire, 32-33)!

So, let’s at least take one step forward, knowing that, eventually, we have to make a choice.