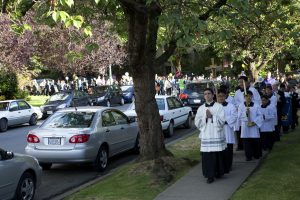 This homily is for our family and friends who have left the Church, and then for those of us here who have been hurt by someone in the Church.

Our family and friends who have left the Church often cite various kinds of hurts: they’re offended by Church teachings, scandalized by the sexual abuse of minors by clergy; they say some priests were arrogant, distant, insensitive, or hypocritical, or they just didn’t get along with a priest. When they say Mass was celebrated in a subpar manner, they always cite three things: bad homily, bad music, and no community (no one loved them).

Those of us who remain in the Church typically get hurt by the gossip, lack of kindness, cliques, meanness and pettiness of other Catholics. A few of us have also been hurt by priests: they were mean to us, didn’t have time for us, or let us down. Thank God we’ve never left the Church. But it still hurts. 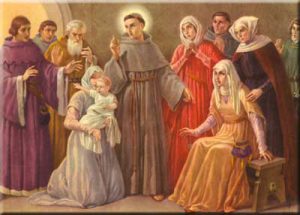 We’re taking up this question because our patron saint, St. Anthony, was famous for reconciling people! “Because many held him in great esteem, he was often called to reconcile families,” political parties and whole cities, and to free them from resentment.

Now the Church is a family and our parish is a family, and many in these families need to be reconciled. The devil wants to separate us from our mother, the Church, so that he can separate us from our heavenly Father. For example, if a priest hurts me, I then lose confidence in the Church’s teaching authority—so I stop listening to the Father’s teaching coming through our mother. In the same way, the devil wants us to hurt each other so that we stop coming to Mass. Very simple strategy: I don’t feel welcomed by people at Mass, so I get hurt and don’t want to come anymore. This strategy works.

We want to follow St. Anthony’s example and try to reconcile ourselves and the people we love who have a bad relationship with our mother, the Church. How do we do it? St. Anthony was a peacemaker and peacemakers do it in two steps: 1) they help both sides admit their wrongs, and 2) help them seek the truth.

Let’s take a true case: A 23-year-old woman said: “I felt deceived and undervalued by the church. I didn’t understand certain things and found no mentors within the church. I just stopped going because my community of friends and family were no longer in the church.”

Step 1: If this lady were sitting down with us and we were representing the Church, the first thing we should do is apologize for our mistakes (e.g. “I’m sorry you felt deceived and undervalued, that you found no mentors”). Catholicism is about truth, so if anyone brings up horrible things that Catholics have done (e.g. sexual abuse and cover ups by bishops) then we have to acknowledge them; Evil must be acknowledged as evil. We who love the Church and defend her should apologize on her behalf, because we’re the face of the Church; by doing so, we show her compassion. To anyone here who has ever been legitimately hurt in anyway by any Catholic, especially a priest or sister or someone representing the Church, I’m deeply sorry. Though we know we’re sinful, we shouldn’t be complacent with it. There has to be more accountability in the Church, where we live up to the standards Jesus set us. Our priests, for instance, should be friendly and people should be kind at Mass and welcoming.

Two days before I was ordained a priest, a priest came up to me and said, “Deacon Justin, I want to apologize for what I did.” What he did was over six years ago! But it had been on his heart for all this time—I never knew that. He carried the regret of his sin for many years, and then had the courage to ask forgiveness.

Once the Church has apologized, hopefully, if necessary, we too can admit if we’ve done anything wrong. In the case of the 23-year old lady, she said, “I just stopped going because my community of friends and family were no longer in the church.” But why do we come to Mass? For friends or God? If we think like this young lady then we’re leaving the Church for a bad reason. If she were completely honest, she would have to admit this.

Sometimes we need to admit that our expectations aren’t fair. Many of us want the Church to change her doctrine—that’s not fair. The official teaching of the Church is given by Jesus and unchangeable. We may want the Church to get with the times, but what if the times are wrong? Do we really think we know better than 2000 years of the best Catholic minds on theological and moral issues? Jesus never said His teachings would be easy. In fact, he knew they were extremely hard, but life-giving. Maybe we have to change, not the Church. We may have to admit that consciously or subconsciously we get mad whenever we hear something we don’t like. For example, now that summer’s almost here, we should try to dress appropriately and modestly for Mass. I’m not saying it to hurt or condemn anyone. It’s just a gentle reminder we have to dress nicely for the wedding banquet. Is it fair to expect never to be challenged at Mass? I don’t think so. Christianity is, by definition, challenging, and we’re going to be challenged, we’re going to hear about right and wrong, and to get mad at this isn’t quite fair.

No one likes to be called out and told what they’re doing is wrong. When I was in Gr. 5 I got caught cheating while playing chess. I resented Mr. Miller for calling me on it, and it really hurt. But, when I think about it, the truth is: I was wrong and I was embarrassed about getting caught. I shouldn’t have blamed Mr. Miller, and similarly we shouldn’t blame the Church for telling us what’s right and wrong. If the Catholics really loves us, they will point out where we need to change, and this should be done in love.

Lastly, we expect the Church to strive to be her best, but do we always do so ourselves? The young lady said she found no mentors and didn’t understand things. But was it the Church’s fault or hers, or maybe a bit of both? Clergy should admit that many homilies do not teach well. But sometimes, we too have to admit that we haven’t tried very hard to get answers and haven’t invested ourselves in growing in our faith. The answers are out there for those who look. Admittedly, sometimes we don’t want to find the answers, because that may mean we have to change.

Step 2: Once both sides have admitted where they hurt each other, then they can start seeking the truth. My brothers and sisters, so often in parishes and in the Church there are misunderstandings because we don’t talk to each other and don’t get the facts. Fr. Wilfred Gomes once told a group of priests, “Brothers, when you hear something bad about another priest, go and talk to him to verify it.”

Someone once told me something about Fr. John Brioux, and, for a moment, I thought badly of him. But then I called him up and said, “Father, this man said you told him [this and that],” and he said, “Justin, I never said that at all. I told him something else and he didn’t like what I said.” Wow! What a learning experience. Please forgive me, Lord, for jumping to conclusions.

If a priest or someone else here hurts you or does something you dislike, seek the truth and talk to them, not about them. If we never try to get answers, then maybe we lack courage—something to pray for. 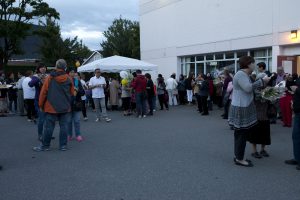 For Catholics who have fallen away, we have to teach them the truth, which makes so much sense, i.e., the Church is full of sinful people. Jesus came for sinners, so He invited sinful people into the Church. He knew there would be bad priests in the Church, and let us learn this lesson by Judas and the other ten apostles who abandoned him. There is no perfect Church, if you find a perfect Church, go join it; it won’t be perfect anymore. The Church is not a museum of saints, but a hospital for sinners.

But, you ask, “Father Justin, why aren’t they more holy if they go to church?” For the same reason that you and I sometimes aren’t more holy: sometimes we’re lazy, resistent, or fall into old habits. Other times we don’t live the teachings of Jesus. We come to Mass but don’t try to change. We’re involved in all these ministries but don’t go to Confession, don’t work on virtue. 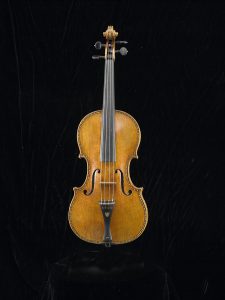 “A medicine must be judged not by those who buy it but by those who actually take it” (Frank J. Sheed, Theology for Beginners, 116). When Catholics actually imitate Jesus and follow the teachings of the Church, they become saints. Catholicism is like a Stradivarius violin, considered by many to be the best violin in the world, sometimes worth over a million dollars. When it’s old and dusty, and when played by a beginner, it looks and sounds horrible. But, when played by a master, it’s sound is perfect. When people hear this truth about the Church, it makes sense.

We all have to get to the point where we’ll never leave our mother, the Church. Our brothers and sisters may hurt us, but we’ll choose never leave the Church, because we don’t want to leave the Eucharist. The devil wants to separate us from the Church, but we’ll stick it to him by saying, “I’ll never leave.” For those who don’t yet have this rock-solid faith, we have to help them get to that level, by acting like Jesus and showing the genius of Catholicism. We have to work on those areas where we lose people: work on the homily, the music, the beauty and the sacred. Tonight and this weekend, we have so many guests so please, please welcome them to our community. 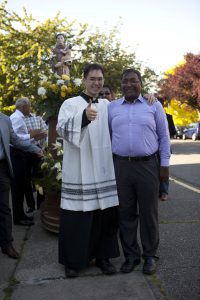 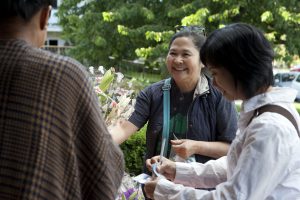 St. Anthony is our peacemaker. He reconciles us with the Church by helping us all admit where we’re wrong, and then by seeking the truth.