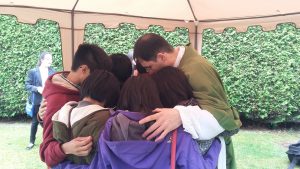 Why are priests so powerful? They have the ability to love or hurt deeply. When a priest visits our homes, blesses us, and prays for us, it’s special. When he says something kind, it’s extra special; when he scolds, it’s extra painful. Words that seem so simple to me are very important for other people. About a year ago, Alex, who helps lead our youth choir, during his pulpit talk about the faith studies, shared how he and I met, and how, at the end of our meeting, I said, “Thanks for being a good Catholic.” For me, I was just thanking him, but for him, those words had more power than I intended and had a very positive effect. He told me later that he thought to himself: “I’m not a good Catholic. So, what can I do to become a better one?”

One reason priests are so powerful is because they’re spiritual fathers, and fathers represent God to their children. We may not realize it, but we typically get our predominant image of God from our parents. When our parents are distant, God seems distant; when parents have high expectations, so does God; when they’re always a safety net, so is God.

Today, on the occasion of my anniversary of priestly ordination ten years ago, is a day to thank God for all our spiritual fathers, and to pray for more spiritual fathers. And I’d like to ask everyone to pray not just for more priests, but for priests who multiply goodness.

Scott Hahn says a father is someone who begets children like him. None of his six children look like him, but they are like him: they share his same love for Jesus and the Bible, and his passion for truth. If he were to make a bronze statue of himself, that statue may look like him, but it wouldn’t be like him: it wouldn’t be able to love what he loves. That’s what a real father does. God the Father fathers the Son so well that His Son loves exactly like the Father. That’s why we say ‘consubstantial’ in the creed, because Jesus is of the same substance as the Father! The Son loves exactly like the Father.

One way to measure how good a priest or biological father is, is to ask the question, “What do they multiply?” For example, does a father multiply respect or disrespect for his wife? Because the children will often imitate dad’s treatment of mom. Remember the story about the father who defended his wife against the rude comment of their oldest teenage son? The son learned to respect his mother from the example of the father—that’s a good father. See what our children focus on and what they’re interested in, and that will tell us what we’re multiplying.

A young man named Joseph Prever shared how he felt homosexual inclinations in his teenage years. He felt isolated and had no one to talk to about it. He either heard nothing from the Church about homosexuality or just heard bad things, and, at one point, his father said, “I wish they’d just move to another planet,” referring to people with homosexual attraction. For years his feelings of not being acceptable, that there was something terribly wrong with him, grew.

The first time he ever told someone about his struggles, all of it, was in Confession. Instead of just brushing past it, the priest said, “Well, do you want to talk about that?” and Joseph said, “Yeah, please, I do!” Joseph said, “He made himself available to me in a way that no one else ever has. He was very truly a father to me, and continues to be one. I can’t even, you know… there’s nothing I could ever do to ever repay him for that.” Through that priest, Joseph has come to know his goodness, feels loved, and understands and embraces the Church’s teaching on sexuality 100%. This priest multiplied goodness and truth and now Joseph blogs, further multiplying.

What this priest did, and one of the most important thing any father can do, is to show the real face of Jesus to his children. In today’s Gospel, Jesus asks the disciples, “Who do the crowds say that I am?” (Lk 9:18). Everyone gets it wrong, just like today: Most people believe Jesus is a fantasy, that He’s uninvolved, a nice guy, a great teacher—to teach this to our children would multiply confusion. Jesus is actually our creator, the one who loves us, not a rival, but someone who wants to have a relationship with us, who makes us fully who we are, who accepts us as we are, but loves us too much to let us stay the way we are—that’s right, Jesus is the most loving person there ever was and the most demanding. St. Peter got it right: Jesus is the ‘Christ,’ the anointed one of God; He’s the one who saves us from our selfishness and unhappiness, and reconciles us to the Father. We need more priests who can teach us who Jesus really is.

I’d like to suggest one important way we can pray for more priests like this: adoration of the Blessed Sacrament. Adoration means spending time in prayer where the Eucharist is present, typically in the tabernacle in a church. Parishes that do this multiply in so many ways, especially in vocations.

Today, on my anniversary of ordination, I’d like to give a gift to the parish. I saved up for a while and bought a new tabernacle that I’d like to put in our adoration chapel. Why? 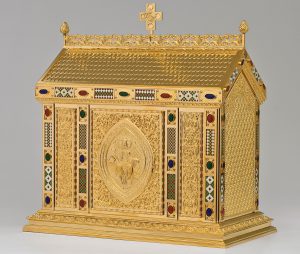 Basically for many years, I reflected on the gospel story of how, six days before the Passover meal, “Mary [of Bethany] took a pound of costly ointment of pure nard and anointed the feet of Jesus and wiped his feet with her hair” (Jn 12:3). But Judas suggested this could have been sold for 300 days wages and the money given to the poor. Do you remember Jesus’ answer? Was this a waste of money? He said, “Let her alone, let her keep it for the day of my burial. The poor you always have with you, but you do not always have me” (Jn 12:7-8). When I thought about this story, I pondered that she didn’t waste 300 days wages on Jesus but did something right—Jesus Himself said so: “Truly, I say to you, wherever the gospel is preached in the whole world, what she has done will be told in memory of her” (Mk 14:9). Every year, when I heard this Gospel on Monday of Holy Week I wondered how I would spend my money: mainly on myself and on other people (but mainly on myself). So I felt I should do something greater for Jesus. So I saved up a year’s salary and bought this tabernacle for Jesus and for you, praying that it will inspire greater faith in the Eucharist.

Now some people will rightly object, “But Jesus doesn’t need it.” I know, of course He doesn’t need it, but He deserves it. We buy expensive wedding rings that people don’t need because they symbolize something more. We decorate our homes with things we don’t need for survival, but for beauty, because the human person needs beauty to thrive. And, don’t worry, I give plenty of my money to those in need, and I hope to give even more. 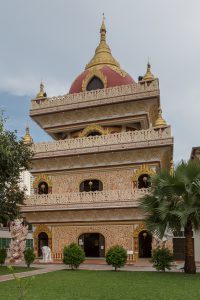 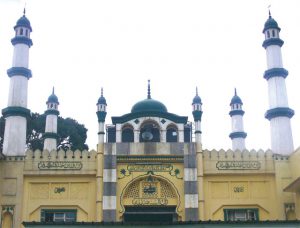 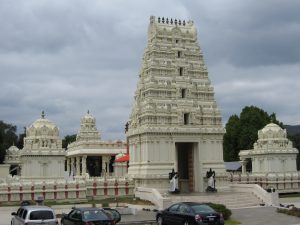 We all need to expand our vision that it’s okay to spend money on God, on the Mass, on liturgy, to prove to ourselves and other people that this is the most important thing we do. In truth, we spend money on what’s important to us: we spend money on ourselves, our family and friends. Go google ‘Buddhist temple,’ ‘Muslim mosque,’ or ‘Hindu temple,’ and look at the images: they construct buildings of immense beauty, because it’s human nature to create something beautiful for the divine.

This tabernacle is a visible sign for us, not God, that He’s the most important thing we have. The precious exterior (the gold plating, the jewels and enamel) points to what’s more important, what’s contained inside. Please go downstairs after Mass and see this tabernacle, that contains God within.

Our goal is that we’ll make our adoration chapel more functional, comfortable, and beautiful this year (quieter, cooler and with more seating), and then next year, we’ll expand the hours of adoration to seven days a week. I’d ask everyone to pray about committing to spend at least 15 minutes a week with Jesus in the chapel—this is a parish goal. Not an hour, not 30 minutes, but 15 minutes.

15 minutes of adoration will multiply everything. In January we mentioned how “St. John of the Cross says that people ‘would accomplish a greater good by one single work, and with much less effort, than they now accomplish by the thousand works on which they spend their lives’ if they spent more time in mental prayer.” How? Because when we’re close to God, everything is more fruitful. Mother Teresa could change people’s lives just by being with them because she was so full of the Holy Spirit. When we spend time with Jesus, we become more loving, and so the time we spend with other people becomes more fruitful. People who spend time with Jesus love better. And “for very young children, the sight of their father showing deference to a higher power is important to their lifelong concept of God. If even Dad shows affection and respect to God, then God must be all-powerful indeed” (James Stenson, Successful Fathers, 48).

Will it be a sacrifice? Only at first. We’ll soon see that this sacrifice multiplies.

David Bauer is one who made such a sacrifice. He was born in 1924, in Kitchener, Ontario and had a promising hockey career ahead of him. His older brother, Bobby, went to the NHL and played with the Boston Bruins. When he was 20, David won the Memorial Cup and many thought he too would enter the NHL, but instead, he followed God’s call to be a priest, and became Father Bauer when he was 29. He gave up his dream, his life of hockey, because God was more important. But, because he was so good at hockey, when he taught at St. Michael’s College, they also made him their hockey coach. In 1962, he came out to St. Mark’s College at UBC and started a national team of Canadian amateurs. He then coached in the Olympics, World Championships and eventually entered the NHL Hockey Hall of Fame under the Builder’s category, and now there’s an arena at UBC and in Calgary named after him.

But his best work was as a priest, multiplying the goodness of Jesus. While coaching at UBC, he met a young 21-year old French student who wanted to become Catholic. He said to her two things: 1) “When you give God everything, he gives you what you want,” meaning what you truly desire, not superficial things, but the things that will truly make us happy; 2) “If I had my choice, I’d spend all my time in chapel”: hockey was important to him, but adoration was more important.

Now that 21-year old woman is my mother. Mom learned from Fr. Bauer a great love of Jesus, that it’s worth it to give up everything for Him, because, in the end, Jesus doesn’t take away anything good. He only takes away good things to give us better things. Fr. Bauer’s influence and those few sayings helped influence me too. That’s the power of a good priest: he multiplied truth and goodness in my mother, and then in me, even though I never met him. That’s what a sacrifice for Jesus can do.

One of the best things a biological and spiritual father can do for their families is to spend time with Jesus. Let’s consider again those two action points: 1) that we all spend 15 minutes a week in adoration with Jesus; 2) that we pray for my spiritual fathers, fathers who multiply goodness.