I told you once about a friend who would re-read a letter I wrote him years before.  When he needed encouragement, he would pull it out and read it.  This is part of what I wrote: “You have a wonderful spirit and I appreciate your love of God, the Church, your dedication to prayer and truth, your prayerfulness, kindness and sincerity.  Please never lose your goodness and never lower your standards.  Your love of God and your desire to be holy have been an inspiration to me—thank you for that.  I’ve also enjoyed our conversations and jokes.”

Now it surprised me that everyone was listening attentively to what I read!  Why?  Perhaps later on you can tell me.  But, based on my experience, here’s one reason: we all need affirmation because we don’t get enough of it; and just hearing a sincere act of affirmation interests us.  I see it regularly: people don’t feel special, and many people deep down doubt that they’re loved.

Do you remember the TV show “The Fresh Prince of Bel Air?”  I don’t think it was a great show, but one episode accurately portrayed the need for a father and the brokenness of not having one.  We find out that the father left the son, Will, and the son is overjoyed that the father’s coming back into his life, only, later on, to depart again.  And Will is crushed… again.  It ends with a poignant question “How come he don’t want me?”  The character functions very well in life, seems normal, but there’s this pain in him.  And who loves him like a father?  Uncle Phil!  Will is, in a very real way, adopted by his uncle.

St. Paul says in the second reading that “God sent his Son… so that we might receive adoption as children” (Gal 4:4-5).  Every Christian is an adopted son or daughter of God—and that is the lesson for today.  God is our father and gives us all the love and affirmation we need, and we should never doubt that we’re loved.

Each of us is special in God’s eyes because we’re good.  And sometimes I want to shake people and tell them, “You are good; you are loved!” 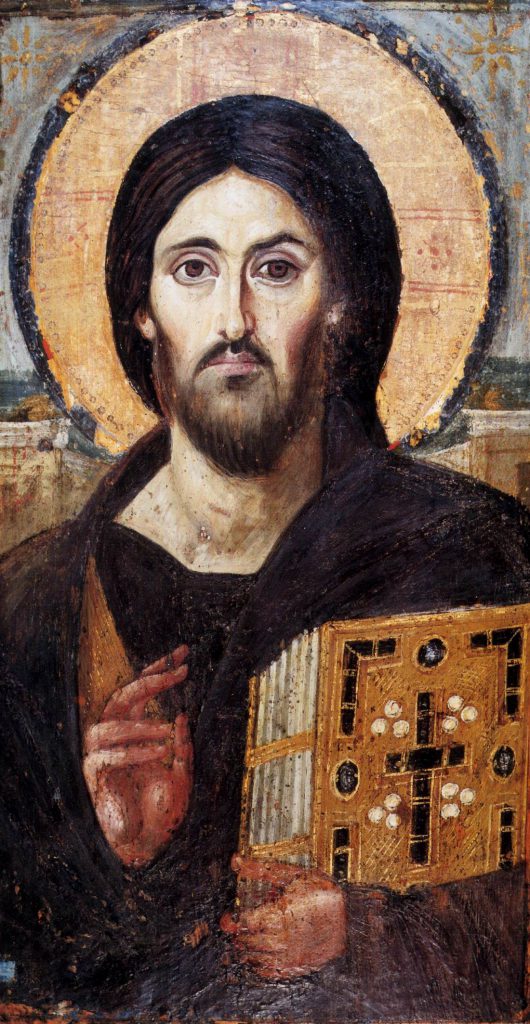 Now, how many natural children does God the Father have?  One.  Jesus is His natural son.  While God loves everyone and Jesus dies for everyone, we become adopted children of God through Baptism (CCC 1213, 1243, 1265, 1279).  That’s why Jesus talks about being “born anew” and “of water” (Jn 3:3,5).  This is the affirmation we need; the fact that we’re adopted means we’re special, loved, and wanted.

Getting baptized isn’t just about getting sins forgiven, it’s also about getting adopted by God into His family.  Scott Hahn gives this image: Picture a convict on death row, guilty of some horrible crime, going to be given a lethal injection.  To make matters worse, he’s dying of some terminal illness anyway and he’s only got a day or two left to live, and there’s no known cure.  Even if there was he couldn’t pay for it, because he’s broke, in deep debt, and has no family.

Picture him going down the hall towards the injection.  The phone rings, he picks it up and he hears the voice of the governor on the other end who says, ‘I’ve got good news: I’ve granted you a full pardon.’  That would be good news.  He won’t get executed, but can now go back to his cell and die of natural causes.  But, if the governor said, ‘Not only have I granted you a pardon, but I have an announcement: they’ve just found the cure for your illness, and it’s on its way down to the prison.  It’s very expensive, but, don’t worry, I’ve already paid for that.  I’ve also paid off all your outstanding debts, and besides that, I filled out adoption papers, there’s a white limo outside the door, you’re coming home, you’re my son.’  That would be great news!  That’s how we understand the Gospel.  Jesus doesn’t just die to redeem us from sin.  It’s ultimately a divine adoption, so that we come home into his family—that’s why we make so much out of the Church (Scott Hahn, God’s Family & Ours: The Church and the Trinity, Track 11, 1:39).

Did you ever realize how blessed we are to be Catholic?  God’s our dad, Mary’s our mom, Jesus is our oldest brother, and the saints are our brothers and sisters.

When I was sixteen, I went to a wedding of family members that I didn’t know too well.  After the wedding, we went to someone’s house and I got to ride in the limousine with my older cousins.  When I asked about riding with them, one of them said, “Of course, you’re blood.”  Those words deeply touched me.  I got to ride in the limousine with these cool people because I was related to them.  Even though we didn’t know each other well, I had the privilege of being with them because we’re family.

Being Catholic means we have privileges that other people don’t.  We get to receive the Holy Spirit in Confirmation, go to Confession (which is a huge blessing, i.e., getting to go to the divine doctor!  Other people don’t have access to it); we get to receive the Eucharist; when we’re sick and dying we can be anointed; and when we die, we receive a Christian burial.  We have a visible father in the Pope, we have this incredible body of wisdom in the teachings of our mother, the Church, and the examples of our older siblings, the saints.  Now, of course, being part of this family means we have to abide by mom and dad’s rules, but those are great rules!  And no matter where we go in the world, even if we don’t understand the language, we understand the Mass, because it’s the same family meal!

And it gets better.  Human adoption is amazing: you take a child who isn’t part of your family and make them part of it.  You promise to love this child like they’re your very own: giving them all the rights (of course they too have to live by the rules), inheritance, love, and affection your natural children get.  But there’s one difference: the child will have different blood than the parents—this isn’t a huge deal considering the way the child is loved, but it is a difference.  When God adopts us, however, He overcomes this difference.  He actually pours His blood into us.  How?  Remember, we’re talking about a spiritual adoption so there’s a spiritual blood, which is sanctifying grace.  Sanctifying grace is God’s life in us.  The life is in the blood, so, when we receive sanctifying grace, we’re receiving God’s life.  We receive this during Baptism, can reject it by mortal sin (mortal means it kills the life within us), but can also receive it again when we reconcile with God in Confession.

I feel so blessed to be adopted and part of this family!  It’s something I don’t deserve.  God wants everyone to be part of His family.  The whole Bible is about God creating humanity so that He can adopt them.  Jesus came to form a family, which is the Church.  That’s why Pope Francis says you can’t be Christian and not part of the Church.

Here are a few practical applications of being adopted by God, besides the love and affirmation we receive. 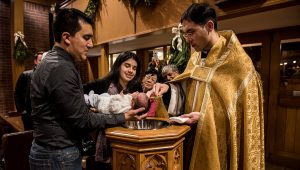 Next, because Baptism is our entry way into this family, from now on we’re going to have baptisms during Sunday Masses.  Because we’re a family, when someone gets baptized, we’ll schedule it at the Mass they normally attend.  There are three practical benefits: 1) “The family benefits by making their profession of faith standing before and with the community;” 2) “Their friends and guests benefit from seeing the Church at worship;” 3) “And the parishioners benefit by being part of such a joyful event” (Fr. James Mallon, Divine Renovation, 223).

Next, adoption is so beautiful, and God loves it so much that perhaps He’s calling some of us to adopt.  There are many children in need of great parents; they would benefit so much from having parents such as yourselves, and you could give them a life they wouldn’t otherwise have.  Perhaps one reason why some couples are not able to have children of their own is because God’s re-directing them to adopt.  It’s painful not being able to have children of our own, but God always has a plan, and perhaps He’s asking us to do what St. Joseph did: adopt a child.  He never had children of his own.  Whom did he adopt?  Jesus.  He was adopted.

We should also champion adoption as an alternative to abortion.  If ever we hear someone hint at aborting their child, perhaps with phrases like “We don’t know if we’re going to keep this child,” we should suggest adoption.  Every child is wanted.  If someone feels they cannot raise a child, let’s suggest they give them up for adoption.

Let’s end with a quick story.  This story illustrates how God the Father loves us as His children, how He affirms and wants us.  And this is how all of us should speak to our children.  “Heisman trophy winner Danny Wuerffel tells the story of a voice he heard throughout his whole life.  He heard it in first grade when he was trying to win a race.  ‘You’re the fastest boy in the grade, Danny!’ the voice said.  He won.  He heard it in third grade as he turned his head to look at a classmate’s paper and cheat on a test.  ‘You’re a good boy, Danny.  Don’t cheat.’  He didn’t.  He said he heard that voice spurring him on and guiding him all throughout his time as a world-class athlete and competitor.

Flash forward to the birth of Danny’s first son.  Danny’s mother was in town helping with the baby for a couple of weeks.  One day Danny walked past the nursery, where she was rocking the newborn.  ‘You’re so strong, Jonah,’ she said.  ‘You’re such a good boy.’  Danny paused.  Her words sounded so familiar.

Later that same day Danny walked by the nursery again.  His mother was still talking to the baby.  ‘You’re so smart, Jonah.  What a wonderful boy you are.’  Danny Wuerffel broke into tears.  The voice he had heard his whole life was the voice of his mother and father.  It was the voice of love and encouragement” (Matthew Kelly, The Four Signs of a Dynamic Catholic, 216).

This is how God speaks to us.  He’s our father, while Mary’s our mother, Jesus is our brother, and the Church is our family.  We’re good, loved and wanted.  We’re adopted.