A man came to me only one year after his wedding because he and his wife were already separated.  We met a number of times, talked about what was going on and what were the problems.  One problem that came up was that his wife didn’t feel loved.  He was the kind of person who rarely expressed emotion and never expressed himself verbally, which is what his wife appreciated.  Did he love her?  Yes, but the way he expressed it was by doing everything for her:  he would work, cook, do dishes, clean up, drive, shop, etc.  But he wasn’t strong on complimenting or affirming her.  So one of the things he decided to do was to write her a note every day, and, because he still had the keys to her car, put it in her car every morning before she went to work.

His commitment to grow and find new ways to express his love is inspiring.  He could have said, “But I do love her.  Look at everything I do for her,” and not done anything else.  A common temptation for all of us is to think, “They already know I love them,” so what more is there to do?  The answer is: when we love someone, we will find new ways to show it.

Two times in the Gospel there’s reference to the wise men paying Jesus homage.  They come from the East and make a trek because they desire to show Him respect.  They could have said, “The little baby is God and God already knows how much I love Him.  I just have too many things going on right now.”  But they didn’t.  They did all this extra work to show their love.  When they arrived “they knelt down,” as a sign of respect, and “offered him gifts of gold, frankincense, and myrrh” (Mt 2:11).  St. Irenaeus said that gold was for a king (because Jesus is a king), frankincense for God (because He’s God), and myrrh (a burial ointment) for someone who would die (because He would die for our sins).  The point is that they looked for ways to express their love and homage.

Dr. Gary Chapman is a devout Christian marriage counsellor who wrote the book The 5 Love Languages.  In it he says the way we express and receive love can be categorized into five languages: words of affirmation, physical touch, receiving gifts, quality time, and acts of service. 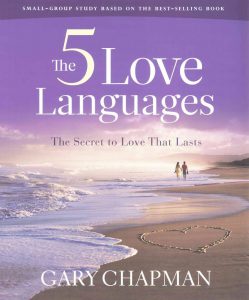 The man whose marriage was about to end expressed his love in acts of service; he told his wife that he loved her by doing so many things.  But she didn’t understand it because she expressed and received love by saying, “I love you.  I think you’re wonderful.  You mean so much to me.  You look great.”  If we don’t find the right love language in relationships, we might as well be saying, “Vi amo.”  This means a lot to many people, but only if you speak Italian.  “Vi amo,” of course means, “I love you.”

Everyone has a primary love language.  When visiting the home of one of our families, the father mentioned how important it was to have everyone together in the same room, and how it hurt him when one of the kids would leave the room and do their own thing.  Reflecting on his comment, I said, “Your love language is quality time.”  He knows his kids love him when they spend time with him.

For those whose primary love language is physical touch, a hug can make their day.  When I first arrived in Port Coquitlam as an assistant pastor, I can’t help but remember on my first day and not knowing anyone, a woman I never met walked up to me and gave me the biggest hug ever.  Clearly, she expressed her love with physical touch.  Contrast this with my best friend in the seminary.  After not seeing each other for a few years, when we finally met up again, I opened my arms for a big hug, while he turned sideways and gave me a one-arm hug.  Having known each other since we were 18, I said to him, “What was that?  Let’s try that again.”  He smiled, knowing that physical touch was not something he was used to.

When our spouse goes on a trip, then comes back, and we say, “You didn’t bring me anything?” it could be that receiving gifts is the way we feel loved.  If you speak this language, receiving a gift makes you feel cared for, valued, and “prized above whatever was sacrificed to bring the gift to you.”  If you’re married to a woman whose love language is receiving gifts, and you forget a birthday or anniversary, you are dead (you might as well become a priest, because your marriage is going down).

God is always calling us to grow and mature in love, in our love for others and especially our love for Him.  Growing in love means we have to learn new languages, for the sake of the people we love.  Most of us speak one or two languages, but I believe God is calling us to learn all five, because He Himself uses all five languages to love us.  What do you call someone who speaks two languages?  Bilingual.  Three languages?  Trilingual.  Four?  Quadrilingual.  Five?  Pentalingual.  One?  American.

We have to find out the love language of those closest to us.  Let’s think, “How does this person most often express love to others?  Is it with words, touch, gifts, time, or service?  When do they come alive?”  If they complain, “We don’t ever spend any time together,” quality time is what they’re craving.  If they say, “You never lift a hand to help me,” they feel loved when we do things that are valuable to them.  Obviously if they say, “I don’t think you would ever touch me if I did not initiate it,” then physical touch is their language.  If we’re able, go to the website 5lovelanguages.com and take the 5-minute test to find out our language and perhaps the language of our spouse and child—just trying to find out is a sign of love.

Be aware of resistance.  Chapman, for instance, mentions how people who don’t spend money on themselves have difficulty spending money on other people—that’s why they don’t buy other people gifts.  Some of us grew up in families where we didn’t express emotions, so when people ask us how we feel, we have difficulty expressing it because we don’t know and aren’t used to verbalizing it.  We may have grown up in a family that didn’t give hugs, or never said, “I love you.”  Perhaps we see taking a walk with someone as a waste of time.

Once we identify the language of those around us, then we should start making efforts to speak it.  It’ll be hard at first, and it’ll sound like we’re saying, “Them pork chops is good.”  We can start slowly and with small gestures, like a handshake, a pat on the shoulder, “Thank you,” “You did a good job,” “I really appreciate what you did,” doing a chore at home, and, when we’re at the store, rather than just buying what we need, we can start thinking, “What would this person appreciate?”  It’ll become easier with time; on the 300th time, you’ll feel more fluent. 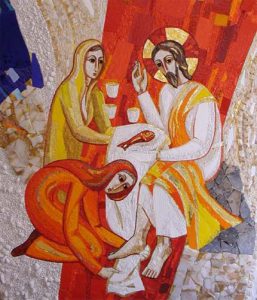 Most importantly, these principles apply to our love for God, because they’re human principles, and we express our love externally, even for God.  Every saint did this.  St. Augustine had no problem using words to express his love for God when he said, “Late have I loved You, beauty so old and so new; late have I loved You” (Confessions, Book 10).  St. John Paul II expressed his love physically when he would prostrate himself on the floor when praying.  “Mary of Bethany took a pound of costly ointment of pure nard and anointed the feet of Jesus and wiped his feet with her hair” (Jn 12:3).  But Judas suggested this could have been sold for 300 days’ wages and the money given to the poor.  Jesus, however, recognizes the value of this gift when He said, “Let her alone, let her keep it for the day of my burial.  The poor you always have with you, but you do not always have me” (Jn 12:7-8).  All the saints spent quality time with Jesus in prayer—no exceptions.  And why did St. Mother Teresa help the poor?  As an act of service to the one she loves.

Jesus also uses all five languages to speak to us!  He tells us He loves us in the Bible; He gives us Communion so that we can be united to Him physically; He gives us gifts in the sacraments, and all the Church’s blessings and teachings; He waits for us in the church to spend time with Him; and what greater act of service can one do than to die for someone? 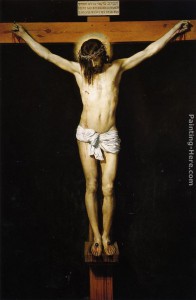 So how do we express our love for Him?  Be careful of self-deception, which says, “Everything I do is for God.”  That’s good, but what specifically?  Or, “I talk to God throughout the day.”  That too is good, but when do we spend quality time, giving Him our undivided attention?

To answer someone’s question, “Why do we kneel during Communion?”  It’s because we’re physically expressing our reverence for such a great mystery, our unworthiness to receive Jesus, and our need for His grace.  Jesus Himself knelt when He was in great need.

The man whose marriage was almost over became at least bilingual, and now he has a good marriage.  The saints are all pentalingual, and the most loving people we know always seek to speak the love languages of other people.  Love expresses itself externally.