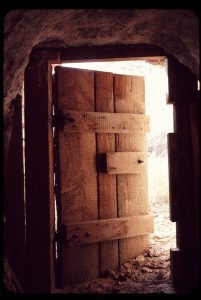 Today’s homily isn’t designed for everyone but only for some.  You can decide if it applies to you and how much.  Two weeks ago, we talked about how the Gospels record real history while last week we talked about how Jesus really is God.  Through these homilies, I’ve tried to lead us to the spiritual door where we say, “I believe Jesus is God.”  I can’t force anyone through this door; all I can do is show that this door makes sense and that it’s beautiful to step through!

Some of us may be wrestling with this decision and that’s great, because it’s a sign we take it seriously.  But for those of us who have acknowledged that Jesus is God, here are a few examples of problems that we might have fallen into:

Some people have said to me over the years that they were closest to God when they were young; they never used to miss Mass, but now they do, every so often. Those of us in this situation have a big problem: We’ve fallen back and our relationship with Jesus has diminished.

For others amongst us, we do the minimum. Yes, we never miss Mass, but our knowledge of the faith hasn’t progressed beyond the basics, we don’t intentionally evangelize, and we’ve been stuck at the same level of prayer for years: We talk to Jesus throughout the day, but don’t make a daily commitment to spend quality time with Him.

Lastly, some of us are very devout but have plateaued. Compared to most Catholics, we feel pretty good, but hesitate about making radical sacrifices for Jesus; we’re still battling with deliberate venial sin; we’re not aiming for heroic virtue and our prayer is still at what’s called the ‘purgative stage.’  (‘Heroic virtue’ means we do extraordinarily good actions with ease and over time—this is necessary to become a saint.  The ‘purgative’ stage is the first stage of the spiritual life.  We still need to get to deeper prayer, grow in virtue, moral stability, complete surrender to God and we still have many disordered attachments (Ralph Martin, The Fulfillment of All Desire, 11-12).)

We’re talking therefore about mediocrity/minimalism.  The biblical word for this is lukewarmness.  Now this may not apply to all of us, but if this has us worried, it’s a sign that our love is being rekindled.

Jesus says to some Christians in the book of Revelation: “I know your works; I know that you are neither cold nor hot.  I wish you were either cold or hot.  So, because you are lukewarm… I will spit you out of my mouth” (3:15-16).

Why?  Because Jesus was never lukewarm!  We just heard the Passion of our Lord, how Jesus gave everything to the Father for our sakes.  In St. John’s Gospel it says, “Having loved his own who were in the world, he loved them to the end” (13:1), meaning completely.  As humanity kept on throwing at Him all of our sins and hatred, He kept on pouring out more love.  He kept on giving, first in the garden, then in the trial, then while being scourged, crowned with thorns, spat upon, carrying the Cross, and finally crucified, all for us. 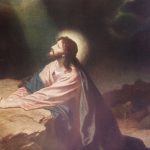 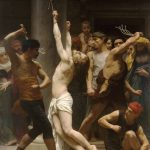 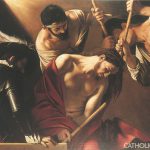 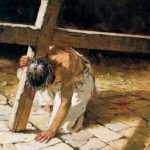 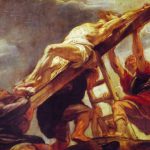 When we encounter Jesus’ love for us, we want to love in return.  When we see Jesus’ generosity and total dedication to the Father, we say, “I want to be like that.”  I was out walking recently and had an insight: I don’t want, at the end of my life, to think I could have given Him more.

So love, if it really is love, must grow and increase.  The image I’d like to use today is acceleration.  I learned in high school physics that ‘speed’ means how fast something is going.  But ‘acceleration’ is the change of speed.  So when we’re driving 70 km/h (in front of the church door), that’s our speed.  But, going from 0 to 70 km/h is the acceleration.

Some of us are going 10, 50, 100 km/h spiritually.  But here’s the thing: We’ve been going at this speed for a long time or are even slowing down.  But love doesn’t slow down; Jesus never slowed down.  And we can’t grow in love or become a saint unless we accelerate. 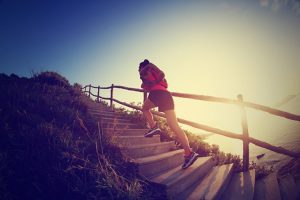 Think about building physical endurance.  If we run our hardest and do 10 km in 1 hour, and do this every week for a year, we’ll be in good shape, but will we eventually be able to run 10 km in 45 minutes?  Probably not.  Why?  Because our body has become used to doing it in one hour.

Many of us here are growing in love and virtue and it’s something to celebrate (keep up the good work!):

One woman told me she used to go to Confession twice a year, now she goes six times a year—that’s great! A number of people have returned to Mass after years of being away—amazing!  Some people used to miss some Masses—no longer.  Tuesday night Mass is increasing with people who want to get closer to Jesus.

One of our teenagers who goes to a Catholic high school, after a lacrosse game, recently went to Subway with the team. When the coach started to order, the student interrupted, “Coach, it’s Friday, we’re not supposed eat meat.”  So they all had tuna subs (his teammates wanted to kill him).  That’s a courageous act that he would never have done before.

Some of us are more friendly at Mass and are taking it upon ourselves to lead people closer to God. Some of us are no longer afraid to pray grace in public; we’re more open about our faith, and more conscious about bringing Jesus to work; we’re even inviting people to church, to Alpha or the Faith Studies.

So the question is: How are we specifically going to increase our love for Jesus?

One of my friends once said that whatever he did for Lent, he would maintain from that point on—that way, every year, he’d raise the bar.  Think about doing this.  Ask some spiritual friends or a priest in Confession, “Father, could you suggest any way I can grow?  Where do you think I need to grow?”

I also have to thank everyone for being so reverent during Mass and respecting people’s need for silence so that they may pray, but, I need to remind people in the foyer that there’s too much talking during Mass.  Last week, we could hear adults talking at the 12 p.m. Mass during Communion.  As your pastor, I’m here to call you to a new level.  If this happens again, I’m going to remind you during Communion to be silent.  We can and must do better, especially for our kids.

Do you know why rollercoasters are so much fun?  It’s not because they’re going fast, but because of their constant change in acceleration, twisting and turning, up and down.  People feel acceleration more often than speed.

One reason why our kids fall away from God is because they don’t feel us parents growing.  Sure, we go to Mass every Sunday, but that’s easy for us and we’ve been doing it for our whole life—they see that we’re coasting.  They will only take notice when they see our love for God and neighbour increase.  No one takes notice of a priest who goes to daily Mass.  Why?  Because it’s routine for him.  But when a priest increases his devotion, gets more bold in his preaching, people feel it, and it inspires.

Fr. John de Brebeuf was already a holy priest when he came to Canada from France in the 1600s.  What’s really inspiring, and what helped make him a saint, is when we read in his diary that, at one point, while in Quebec, he started wanting to sacrifice his life for Jesus.  He wrote, “Jesus, my Lord and Savior, what can I give you in return for all the favors you have first conferred on me?”  This is a man who’s in love… and what does love do?  It accelerates, increases and grows.