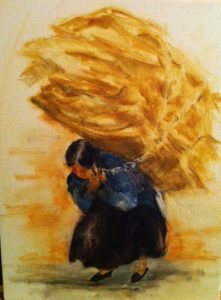 I’d like to tell you about a friend.  When I first met her at a former parish of mine, I would see her after Mass, where she’d stay behind in the pew praying.  Unfortunately, she seemed to have a look of sadness and even anger.  (I actually wondered if she was mad at me or if my homilies were that bad.)  Anyway, I learned later, in private, not in Confession, that she had committed adultery.  So she carried with her feelings of regret, guilt, confusion, etc.  And I felt sad for her.

She told me later that three things helped her healing: 1) When she went to Confession, she knew she was forgiven by God.  2) She was still worried about her husband, who was suffering greatly, but when he started healing, that helped her.  (They chose to stay together after the adultery.)  3) There was still doubt if other people would forgive her.  (Can you imagine the burden of knowing that your friends know what you’ve done?)  People aren’t as forgiving as God.

Years passed, and she and her husband grew in faith and soon became leaders in the parish.  At one point, someone asked her to teach other people about being Catholic.  Still feeling unworthy, she came to me and asked, “Father, do you think I should… after what happened?”  I said, “Of course you should teach!  What you’ve done is in the past.  You’ve gone to Confession, right?  Well, then it’s over.  I would take you as a teacher over many other people because you love God: You’re faithful and obedient to the Church’s teachings.  If I had children of my own, I would happily entrust them to you.”  For her, being asked to teach and being supported by her priest was a sign that other people believed in her, that she still had something to offer and that she was free of the past.

Some of us similarly feel burdened by our sins and mistakes.  I myself have had a number of recent experiences where I felt like a hypocrite and weighed down by my mistakes (E.g. I recently preached on something, then immediately went against what I just preached!).

But it’s not God’s desire for us to stay weighed down by our mistakes.  Healthy guilt is good, but not one that forgets God’s mercy.  The Gospel about the first Easter morning, which we just heard, shows the power of Jesus to give the disciples a fresh start.  When He meets St. Mary Magdalene and the other Mary, He says to them, “Go and tell my brothers to go to Galilee; there they will see me” (Mt 28:10).  What’s so significant about this?  It’s that He doesn’t say, “Go and tell those traitors, those losers, those men who said they’d follow me but didn’t…”  Imagine how badly they would have felt, having betrayed their God and friend, yet He still calls them brothers. 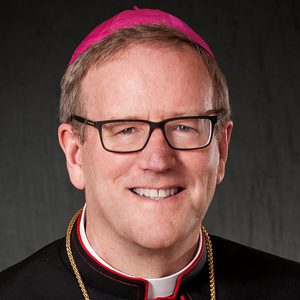 Bishop Robert Barron points out how, throughout history, mankind has always used violence to restore order; you hurt me so I’ll hurt you.  But Jesus doesn’t do this. When He appears to the disciples in St. John’s Gospel a week after His resurrection, He says, “Peace be with you.”  He offers forgiveness, what we call “Divine Mercy.”

I’m sure some people have heard the following parable that comes in different variations, but all make the same point: A woman goes to a bishop claiming to have visions of Jesus.  She keeps going to him giving him instructions that she believes comes from Jesus, but he doesn’t believe her.  Finally, he challenges her: “If Jesus is really speaking to you, ask Him what were the last sins I confessed?”  When they meet again, he asks what Jesus said.  She responds, “He said, ‘I forget.’”

The point is that when God forgives, He forgets; Pope Francis says the same thing: Sins which are confessed are over and done with, and in the past.  We shouldn’t let ourselves be held bound by them as if they define us, or give into the temptation of self-hatred.  Yes, we should do penance and make up for them, but we shouldn’t be burdened as if we’re still guilty.

That’s the first part of the homily: receiving forgiveness gives life.  Here’s the second: How do we receive new life when we’re the victims?  How did the husband receive new life after he had been betrayed?  He had always dreamed of a perfect marriage, but now it was so embarrassing and he was ‘messed up’ (he used a stronger word than that, one that I can’t repeat).

He knew Jesus commands us to forgive.  Jesus says if we don’t forgive others, we won’t be forgiven our sins.  Why?  1) Because all of us have sinned and are offered forgiveness by God.  So how can we receive forgiveness and then not offer it to others?  That’s not fair (Cf. Mt 18:21-35).  2) If our hearts remain angry at people so much so that we can’t forgive them, then our hearts will be so hard and impenetrable that we can’t receive God’s forgiveness.

The husband also knew that if he didn’t forgive, he would keep on hurting himself.  Whenever we don’t forgive we keep on replaying past hurts and let ourselves be hurt again; what was done against us is in the past, but by not forgiving we bring it into the present again.  He also wanted to save his marriage and help his children, so forgiveness was necessary for him.

It still wasn’t easy and healing didn’t happen all at once.  He turned to Jesus constantly in prayer, saying over and over, “Jesus, save me, help me.”  He prayed to St. Joseph to try to forget what happened, started going to daily Mass, spent more time with Catholic men, and got more involved in the parish.  Over time it’s gotten so much better that he’s actually forgotten much of it.  It was painful, there was suffering, but he says, “I’m happy now—that’s what I can say!  Life is incredible with Jesus!”  (Please keep in mind that staying together after infidelity isn’t always possible in every marriage, and sometimes separation is the right thing to do.  But, even when there’s separation, forgiveness is still necessary.) 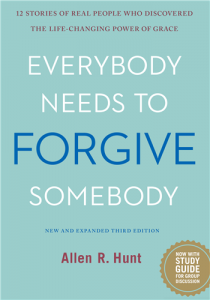 Our Easter gift is Everybody Needs to Forgive Somebody.  It’s a simple and powerful book with 12 stories about God’s power to heal through forgiveness.  You don’t have to read it straight through; just flip through it and see which section or story catches your eye.  Ask God to help you find the story that will help you the most.  On page 53, for example, there are seven steps to make forgiveness a lifestyle.  Step seven, being a person of grace and forgiving people in the little areas of our life, particularly spoke to me, because little daily offenses can wear us down; forgiving such offenses, therefore, is the antidote.

Let’s finish with a question: If we could, let’s think about either the worst sin we’ve committed, or the worst thing done against us…  Would we be willing to let a priest tell our story to his whole congregation, the way I’ve done today with my friends’ story, even though it’s anonymous?  You see, whenever we’re not fully healed from committing a sin or being a victim, we don’t want anyone to know about it.

In the case of my two friends, they’ve received so much healing from Jesus and have moved so far past their former problems that, when I asked their permission to use their story, the wife said happily, “Oh, sure, Father!  No problem,” while the husband said, “Father, if it brings people closer to God, go for it!”  I thought for certain that they would be hesitant about giving me permission, that it would still be too raw and too close to home. 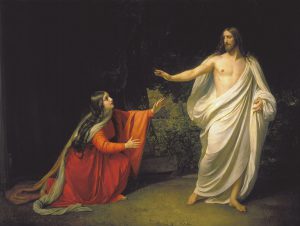 But the husband wrote this in an e-mail to me, after giving permission: “Jesus, after resurrecting, chose to give St. Mary Magdalene (once an adulteress) the blessing of being the first to see His resurrected self!  Jesus not only forgives and forgets, He trusts again repentant sinners and even gives St. Mary Magdalene the honour and important duty of telling the good news of His resurrection to His apostles!  And this is similar to what He has done with my wife—He forgave her, lifted her up, and trusted her to teach God’s people about Him!!!  What a merciful and wonderful God we have!  It’s a mystery and a blessing how God makes something so good with what seems to be so bad.”

Jesus is truly risen and alive and wants to give new life, either by forgiving us or by giving us strength to forgive those who’ve hurt us.  Happy Easter.