It’s no secret that many Catholics struggle with accepting the authority of the Church.  They trust Jesus, but hesitate to trust the Church’s teachings especially on sexuality.

The hope today is that our trust in the Church increases on account of two reasons: 1) She’s the Church Jesus founded; 2) She gives us guidance.

1) Today we have the famous Gospel about Jesus founding His Church.  He takes the disciples up north to Caesarea Philippi and asks them, “Who do people say the Son of Man is?” (Mt 16:13).  The people get it all wrong and don’t understand who Jesus is.  But St. Peter then says, “You are the Christ, the Son of the living God” (Mt 16:16).  And Jesus says, “I tell you, you are Peter, and on this rock I will build my Church” (Mt 16:18).  Though some people like to say that the Church was invented by men, here we have clear evidence that Christ said these words (and we know the Gospels are reliable historically, based on what we talked about in March) (See also, Raymond E. Brown, An Introduction to the New Testament, 221).

Looking more deeply at the passage, we see that Jesus gives Simon a new name, and in the Bible, a new name symbolizes a new role.  ‘Peter’ means ‘Rock,’ so Jesus is saying: “You are Rock, and on this rock I will build my Church,” that is to say, the Church will be built on St. Peter.  That’s amazing, considering that St. Peter wasn’t a rock of a person: He lacked faith and would later deny Jesus three times.  Choosing him to be the rock points to the fact that Jesus was doing something beyond human strength and beyond St. Peter’s ability. 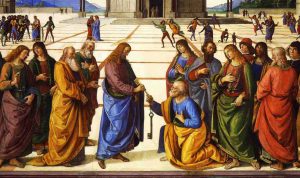 He then gives St. Peter the ‘keys of the kingdom of heaven.’  Keys doesn’t mean something abstract, like the teaching or message of Jesus, but something concrete.  Remember, Jesus is Jewish and knows His history.  In the Davidic kingdom, a king always had a cabinet and a prime minister, called “The one over the house.” We hear about this prime minister in the first reading, where God takes away the office of prime minister from Shebna, who is unworthy, and gives the keys of David to Eliakim; and God says, “I will place on his shoulder the key of the house of David; he shall open and no one shall shut; he shall shut and no one shall open” (Is 22:22).  Jesus says something very similar to St. Peter: “Whatever you bind on earth will be bound in heaven, and whatever you loose on earth will be loosed in heaven” (Mt 16:19).  So, in the Bible, we have two accounts of ‘keys’ with ‘opening/loosing’ and ‘closing/binding.’  Do you think these have a relationship?  Absolutely.  Jewish people, knowing their Bible, would have immediately recognized that Jesus was making St. Peter His prime minister.

In Israel’s history, the prime minister ruled whenever the king was gone or incapacitated.  There’s a story of a king who had leprosy and had to live outside the city for 50 years, so his son was made prime minister and ruled until the return of the king.  The reason Jesus appoints St. Peter in this function is because He’s preparing for His succession, since after He dies, rises and ascends, His prime minister will rule until He returns.

There’s lots of other evidence in the Bible that shows that the Church was given such authority.  St. Paul, at one point in his life, has to go visit the apostles and get approval for what he’s doing because St. Peter is clearly the leader (Gal 1:18-2:10).  When the disciples are trying to figure out if Christian men need to get circumcised, it’s St. Peter and the apostles who makes the decision (Acts 15).  This leads to our second point.

2) Why did Jesus give us the Church?  There are many reasons: Because God wants one family, a family that is united, a family that is visible, but also to give this family guidance.  Let’s focus on this last point by asking two questions: How did Christians know what Jesus taught after He ascended into heaven?  How do we know today what Jesus teaches?

Many people say: Study the Bible.  But there are problems with this: There are hundreds of Christian denominations and each one can give us a different interpretation of a Bible passage—who’s right?  Many Christians don’t even understand the Bible; we just showed that we need to understand the original Greek to see the parallel between ‘Peter’ and ‘rock’; and we need to understand the Old Testament background to know the Davidic kingdom and Jesus’ reference to it.  Another problem is that the Bible doesn’t give us clear cut answers to many questions: Is the Holy Spirit God?  Should we pray to saints?  Is watching MMA a sin?

Now Jesus knew there would be confusion about what He taught.  He could have written down everything, but chose not to.  What He did do was build a Church to safeguard His teaching.

Let’s look at this timeline: 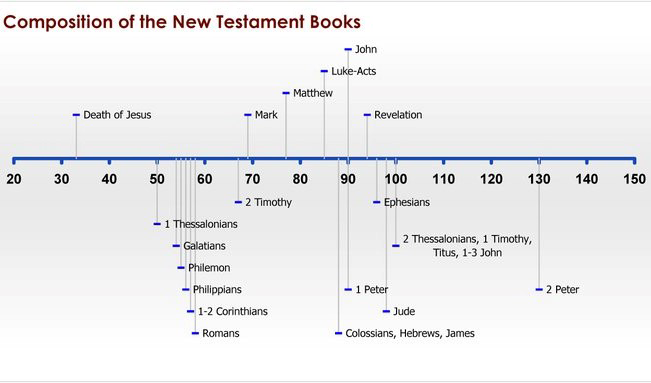 So, if we’re living five years after Jesus ascended, how would we know what Jesus taught?  We couldn’t go to the New Testament because there was no New Testament.  And then we’d have to wait another 15 years for First Thessalonians to be written?  It’s a short letter that doesn’t even cover that much.  And then we’d have to wait another 30 years or so before the Gospels were written to know the important parts of the story of Jesus?  And who’s to say all these documents should be included in the Bible?  Jesus never said there’d be a New Testament.  How are we to know they’re inspired by God or not?

The answer to these questions is: The Church.  The Church existed before the New Testament and put the New Testament together.  Jesus gave us the Church to guide us as to what He taught.  “You are [Rock], and on this rock I will build my Church, and the gates of Hades will not prevail against it” (Mt 16:18).  Listen to that promise: Hades is “the habitation of evil forces that bring about death and deception,” and Jesus promises that death and deception would not overcome His Church (Ignatius Catholic Study Bible, 36).  Instead, St. Peter would have the ‘keys,’ which are symbols of authority: “Whatever you bind on earth will be bound in heaven” (Mt 16:19).  Jesus, therefore, gave St. Peter the grace and authority to pass on His teaching without error and it’s this authority that allowed the successors of the apostles to identify these 27 books as inspired by God and put them into the Bible.

There was a nominal Christian who became Catholic who appreciated one argument for the necessity of the Church due to his background as a lawyer.  The argument compares the Bible to the U.S. Constitution.  Imagine the U.S. founders write it, make many copies and distribute it to all citizens saying, “Here’s the constitution.  You can read, right?  Well then, you’ll understand everything in it.”  The lawyer found this laughable because of its absurdity: The average citizen can’t understand its technical language, what the founders of the Constitution were thinking, and the Constitution could never exhaustively address every question that comes up.  That’s why the founders of the U.S. made a Supreme Court to authoritatively interpret the Constitution whenever new questions arose (Jennifer Fulwiler, From Atheism to Catholicism, Track 8, 4:49).  So, if the founders had the wisdom to do this, wouldn’t God do so for His Church?  That’s what the pope does with the Bible.  He has the power to interpret the teaching of the Bible in accordance with sacred Tradition.  And Jesus guarantees that he’ll never authoritatively teach error.

What Jesus is asking all of us today is, based on the biblical and historical arguments above, to have a greater trust in this authority.

Of course, this doesn’t mean that everything that comes out of the pope’s mouth is Gospel truth.  When the pope gives an interview, he can say things that are wrong because he could be merely stating his own opinion.  But, when he teaches about something related to faith and morals (not just any subject matter) and intends for Catholics to believe this definitively, we believe the Holy Spirit will protect him from teaching error.  Our understanding of infallibility is that it requires very strict conditions in order to kick in.  Even when I teach, I’m not guaranteed by the Holy Spirit to teach without error.  I aim at giving 100% authentic Church teaching, I’m scrupulous about my footnotes and sources and try to verify everything I say, but, I do make mistakes. 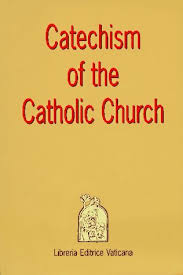 So, Father Justin, how do we know what’s officially Church teaching and what isn’t?  Go to official documents like the Catechism of the Catholic Church, which is an official Church document that covers the gamut of topics and has a very high level of authority in the Church, thus it functions as a baseline for Catholics across the world.  Another way of verifying official Church teaching is to ask me, or by going to reliable Catholic websites.  I’ll suggest one: catholic.com.  Go here for Church teaching rather than the CBC or Yahoo News.

Catholics are sometimes accused of blindly following Church teaching.  Now that isn’t that bad because official Church teaching is guided by Jesus.  But the Church wants us to not just follow but to understand.  So I’m challenging everyone: Do some study on your own!  If the Church gives us a clear answer, we should follow it, but we should also understand the reasons behind the teaching.

In my experience, very often it’s Catholics who oppose Church teaching who follow blindly… whom?  The culture.  For example, 30 years ago, they were against gay marriage, now they’re for it—matching what popular opinion says.  And their reasons for disagreeing are usually surface-level: The Church has to get with the times, the pope doesn’t understand modern culture, the Church has made so many mistakes—this is not persuasive because it doesn’t engage the substance of the teachings.

The onus is on all of us to understand our faith better.  If we are obedient to the Church’s teaching—wonderful!  But we must know the reasons why.  If we disagree with the Church, we have to address the two arguments put forward today and give alternate explanations: 1) the biblical argument based on Israel’s history, Jesus’ words to St. Peter, the change of his name to ‘rock,’ the meaning of gates of Hades, keys, etc.; 2) the historical argument: the fact that the early Christians accepted the authority of the Church, even before the Bible.

If we understand these arguments and the reasons behind the Church’s teachings, hopefully we’ll love the Church more, just as Jesus loved her, because she’s His bride, and He died for her (Eph 5:25).  Peter Kreeft, a philosopher and former Calvinist now Catholic, once said: “To be a Christian is to believe that ‘Jesus Christ is Lord.’  To acknowledge Him as Lord is to obey His will.  And He willed the Catholic… Church for all his disciples.”  To trust Jesus is to trust the Church He founded.