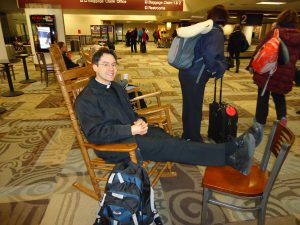 For the first nine years of my priesthood, I wore the customary clothing of a priest: clerical shirt and pants, sometimes with a suit jacket.  But two years ago, I was standing around a campfire at the seminary wearing the cassock, and some of the seminarians asked me if I always wore it.  I said, “No.  I only wear it when I’m here at the seminary and monastery.”  They said, “Well, you should wear it all the time, because it looks really cool.”  Then they started giving me deeper reasons to do so, such as it’s a sign of sacrifice and that I’m totally consecrated to God, it’s ‘eschatological,’ meaning that it reminds us of heaven, where the book of Revelation describes people wearing robes (1:13, 6:11, 7:9), and finally, young men considering the priesthood love it. 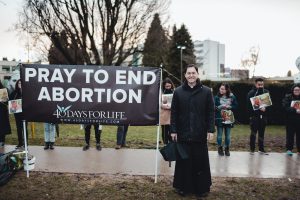 “So, you’re saying I should wear this all the time?”  “Yeah,” they all agreed.  “Well, I’ll pray about it, because it’s not an easy thing to do.  It can be a bit uncomfortable because there’s a lot of fabric, so it’s always hotter, and it’s harder to move around.”

Now, would you change your choice of clothes if God asked you to?  Would you, for example, dress a step up for Mass, because Mass is a wedding, something sacred and special?  I only ask because then you’ll realize what a sacrifice it was for me to decide to wear the cassock all the time.  Remember, I didn’t have to, but I prayed about it, and found that the sign-value of sacrifice, consecration, and inspiration were more important than the discomfort I’d feel, and, wanting to be a better priest, I saw this as a call from Jesus.  Thus, since then, I’ve always worn the cassock.

As an added bonus, it’s been extremely popular at airports, on airplanes, at hospitals, restaurants, and while walking down the street.  I’ve gotten over 50 complements and only 3 insults.  And it’s also great at World Youth Day with a lightsaber and when you’re doing a Matrix impression. 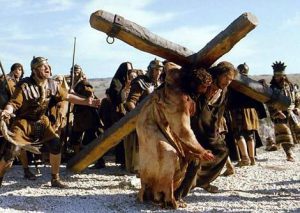 What we’re talking about today is being a follower of Jesus, specifically one who makes sacrifices, that is, a disciple.  Jesus says, “If anyone wants to become my follower, let him deny himself and take up his cross and follow me” (Mt 16:24).

But human nature tends towards comfort, which is why wearing a cassock all the time was difficult for me at first.

Jesus tells us specifically what being a disciple entails, but, for decades now, in Canadian Catholicism in general, we’ve never talked about those specifics.  We just assumed that if someone was Catholic that was enough.  If that person went to Mass every Sunday that was what was expected.  Then that expectation became even looser: “If I come to Mass regularly, that’s enough.”  ‘Regularly’ is what it says on baptism/godparent/school forms, right?  But what does ‘regular’ mean?  It can range all the way from every Sunday to once every two months.

It’s only now, in the past few years, that the Church has come to realize that the vast majority of Catholics aren’t disciples of Jesus, and it’s not their fault.  They were never taught what it meant to be a follower, and the truth is, most priests don’t preach about the sacrificial nature of following Jesus.

Jesus, in the Gospel, reminds us of what it means to be a true follower: “Whoever wants to save their life will lose it, and whoever loses their life for my sake will find it” (Mt 16:25).

Why is this?  Why is being a follower of Jesus one of sacrifice?  Because love involves sacrifice.  If we love someone, we sacrifice our own whims for them.  When we think of the most loving people in our lives, in particular Jesus, they lead lives of sacrifice.  They show us the nobility of humanity.  While a part of us tends towards comfort, there’s another part that tends toward growth and being authentically human.  It’s never to ultimately hurt.  Self-denial means letting go of something good for something better.  I give up some food, for example, so that I can focus more on the soul’s hunger for God; I give up some social media to spend more time with family; I give up marriage to be married to God. 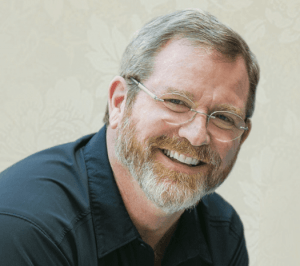 During Jesus’ time, He would preach in the synagogue or in public and heal people.  Crowds would flock to Him: They’d listen, get healed, and discuss a few things He said on the way home.  But then there was a group of people whose relationship with Him went beyond the fascination of the crowds.  They spent all their time with Him, were formed by Him and being transformed into Him (Jeff Cavins, Offering the World a Better Life).  These were disciples, whose goal was to become like the master.  There was a saying that a student would be covered in the dust of the rabbi, meaning that he was following and listening to the rabbi all day long.  And the rabbi would say, “Take my yoke and learn from me,” meaning “Take up my worldview; see the world as I see it!”

Let’s get more specific.  Dynamic Catholic, a few years ago, did a large study of American Catholics and identified 7% of Catholics as “engaged.”  These Catholics had four signs that distinguished them from the 93% of “disengaged” Catholics.  The 7% are not perfect Catholics or spiritual champions; in fact, they still have many problems (Matthew Kelly, The Fours Signs of a Dynamic Catholic, 17), and they’re not all the same, but they do think, believe and act differently from the 93% (Chapter 1).  Let’s go through these signs because they’re signs of discipleship.

Prayer: Engaged Catholics relate to God in a more personal way than do the 93%.  They have a daily commitment to prayer, cling to their routine of prayer with discipline, and know exactly how they’re going to pray each day.  The 93% also pray, but their prayer tends to be spontaneous and inconsistent, when the moods strikes them or when there’s a crisis.

Study: Engaged Catholics are continuous learners, hungry students of Jesus and the Church, and make an effort to allow His teachings to form them.  On average, they spend 14 minutes a day learning more about their faith (20).  They read Catholic books, CDs, DVDs, on the internet and go to spiritual events.

“The most fascinating thing that came out of the interviews in relation to the third sign is that Dynamic Catholics believe that it starts with financial generosity.  They describe love of money and attachment to the things of this world as a primary impediment to spiritual growth, and see this as something that everyone struggles with…  Financially, Dynamic Catholics give several times more to their parish and other nonprofit organizations (as a percentage of their annual income) than their counterparts in the 93%.”

Evangelization: The 7% want to share the joy of knowing and loving Jesus with everyone; sharing the faith is part of who they are.  They “regularly… share a Catholic perspective with the people who cross their paths.”  They pass on books, CDs, send e-mails about the faith.  “Perhaps most telling, the 7% are significantly more likely to invite someone to attend a Catholic event than the 93%.”

Now no one should feel discouraged by this.  While it’s sad that we, as a Church, haven’t regularly talked about what it means to follow Jesus, it’s no one’s fault if this is all new to us.  What we’re doing as a parish is raising the expectations to meet Jesus’ expectations.  The reason I started with giving an example of myself was to show that it’s not easy to make sacrifices and raise the bar.

So, where does this leave us?  Jesus Christ is calling you and me to grow as disciples.  This month we have many initiatives to help us spiritually grow.  We’re starting RCIA on Sept. 14, which is for people who are interested in becoming Catholic or for adults who need to receive sacraments.  Fr. David Gunter, MIC, is coming to give a parish retreat on Mary, Sept. 17-20.  As a parish, we want to grow in our relationship with Mary, and this will be the start.  On Sept. 21, we’re starting another round of Alpha, which is good for us, because it renews our faith with the essential message of Jesus.  On Oct. 4, we’ll have another round of Faith Studies, which is all about growing in discipleship.  Pray about doing one or some of these, and perhaps dress a step-up for Mass.

Think about this: Do you think the disciples, while they were on the road with Jesus, ever woke up bored?  “Ah, man, what are we going to do today?  I guess we have to help Jesus.”  No.  Following Him was the most exciting life ever!  They would wake up and see Jesus praying or eating; they’d listen to Him teach, listen, challenge or be in conflict.  They’d learn from that and learn how God loves.  They’d see Him sacrifice so they’d want to sacrifice.  In some ways, I wish I could have been there.  The reality is, I can; we all can.  All we have to do is say, “Jesus, I want to follow You more closely today, during Mass, after Mass.”   And He’ll look at us and smile and say, “Come and follow Me.”  A disciple is someone who makes sacrifices and becomes like Jesus.