Let me tell you about a wonderful person, who, years ago, admitted he was spending too much time on his job, neglecting his health and his family.  We talked about various things he could do: better time management, not working on weekends, setting priorities, but not about religion because he wasn’t interested.  Every year, there were minor improvements, but he always ended up in the same position, and then we’d have the same conversation. After a while, I realized: Nothing’s getting better.  He wanted to fix this problem, but couldn’t or wouldn’t. 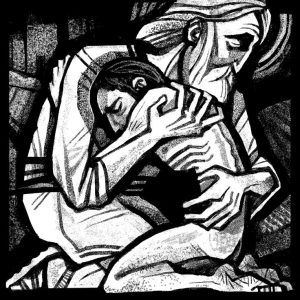 We need a saviour. We might think: “I’m already Catholic, I already believe in Jesus. What’s new about this?” But many Catholics forget that Jesus saves us daily from our trials. They get into a mentality of “doing it ourselves.”

There are many ways to address our problems, but, on Christmas, the second most important Catholic celebration of the year (next to Easter), we want to consider a solution that applies to all of us, and that is, we need a saviour.  Listen to the readings and prayers today—almost all of them speak about Jesus, our saviour.

Now right away, we might think: “I’m already Catholic, I already believe in Jesus.  What’s new about this?”  But there are two things to keep in mind:

1) We may believe in Jesus, but we haven’t entrusted our lives to Him as our saviour.  We pray to Him, but not as a saviour, and haven’t thought about how much we’re in need of help.

2) We’ve already entrusted ourselves to Him as our saviour, but have slipped back into the mentality of doing it on our own.  This tells us that entrusting ourselves to Him isn’t something we do once, but is a daily reality.

There’s a famous poem which illustrates this condition; it’s called An Autobiography in Five Short Chapters.  Here it is:

Chapter I: I walk down the street.  There is a deep hole in the sidewalk.  I fall in.  I am lost … I am helpless.  It isn’t my fault.  It takes me forever to find a way out.

Chapter II: I walk down the same street.  There is a deep hole in the sidewalk.  I pretend I don’t see it.  I fall in again.  I can’t believe I am in the same place.  But, it isn’t my fault.  It still takes a long time to get out.

Chapter III: I walk down the same street.  There is a deep hole in the sidewalk.  I see it is there.  I still fall in … it’s a habit.  My eyes are open.  I know where I am.  It is my fault.  I get out immediately.

Chapter IV: I walk down the same street.  There is a deep hole in the sidewalk.  I walk around it.

Chapter V: I walk down another street.

The story points out many truths: We keep on falling into the same holes in life.  We blame others, but in reality, it’s our fault.  This is the turning point in the story, when we realize that the way we’ve been dealing with our problems (i.e. on our own) isn’t working.

This story is popular among 12-step programs like Alcoholics Anonymous, which is deeply Christian; that’s why Fr. Emmerich Vogt, OP, who came here six months ago, uses it as a tool for spiritual healing.  The first step on the road to recovery is to admit our powerlessness to solve our problems.  The second step is to turn our life over to a higher power.

But there’s a better and truer version of this higher power. 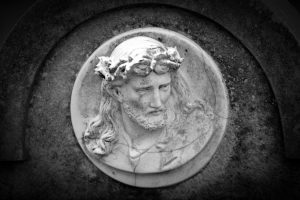 Without Jesus not one thing came into being.

The beautiful thing here is that the highest power isn’t an abstraction or some impersonal force.  It’s a person who loves us, who created the universe out of love, and created you and me because He wanted us to be truly happy, and wants to spend time with us and relate to us.  He loves us so much that He died for us and gives us everything, even His life.

The passage continues: “The true light [another title for Jesus], which enlightens everyone, was coming into the world [He was going to become human and be born as a baby].  He was in the world… yet the world did not know him.  He came to what was his own, and his own people did not accept him.  But to all who received him, who believed in his name, he gave power to become children of God” (Jn 1:9-12).

Humanity has always believed it could do things on its own and we would push God away, but this would lead to misery and separation from God, from each other, and from ourselves.  But our Father loved us so much that He sent us a saviour, Jesus, whose name literally means, “God saves.”  The key for all of us is: Will we admit we can’t fix our problems and entrust ourselves to Jesus and let Him save us?

Remember Nathan’s story?  I know I mentioned him last week, but not everyone here has heard it (and I promise you I’ll never mention him again.).  Briefly it’s this: Two years ago, Nathan shared how he was struggling with deep depression and wanted to die; he hated that he could barely get out of bed; felt like a financial and emotional burden to his family, couldn’t hold a job, and couldn’t love his fiancée as she loved him. 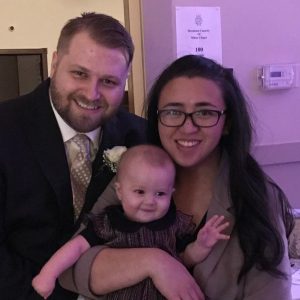 But his family supported him, encouraging him to go to Mass, and in 2015 he took the Faith Studies.  During the fifth lesson, he said, “I realized the reason Christ wasn’t in me was because I had put him outside of my life.  I had been so angry that instead of allowing Christ to suffer with me and lift it up, I decided to do it alone.  I couldn’t see that God had not abandoned me but was smothering me with love.  I was never alone because my family, friends, priests were there the whole time.  I also realized during that lesson that I need Jesus to truly move forward.  The lesson quoted Revelation: ‘Behold, I stand at the door and knock.’  I decided that lesson to open that door and let Jesus in and I am so grateful He hasn’t left!  It has been nine months since I last felt the deep despair of depression and I thank my Lord for that.  He has given me my life back and showed me that He never abandons us.  I am not yet ‘cured’ of depression and I will likely have to take medication and seek counseling the rest of my life.  But I look forward to walking with Christ as a Disciple.”

Nathan’s now happily married and has a beautiful six-month old daughter.  Notice that she looks like him… poor child.

How can we entrust our lives to our saviour?  Just two steps:

1) We have to admit to ourselves and to someone else that we’re powerless to fix our problems.

If we’ve already done this, it’s something we can do again, and something we should do everyday in prayer.  Remember how we talked about in October that all our prayers should begin with praise?  For example, “Father, I praise You because You’re so good, because of who You are.”  I’d like to suggest that we follow that by a prayer of humility.  For instance, “Father, I know without You, I can do nothing” (Cf. Jn 15:5).

But, if we haven’t yet done this, we may want to do this in Confession, which is a sacrament of humility, or admit it to a trusted and mature friend. 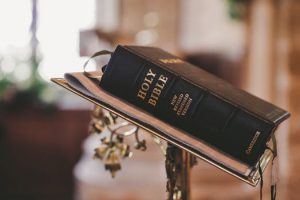 Entrusting ourselves to our saviour Jesus Christ requires us to engage with Him through reading the Bible. It is recommended we do this for a minimum of 15 minutes per day.

2) We have to entrust ourselves to our saviour and invite Him into our life.  If we really believe He can save us, we have to act on this.  This may mean reading the Bible every day for 15 minutes, because we need His nourishment and truth.  It may mean coming to an extra Mass once a month, or dropping by the chapel once a week, because we need His help.

We may want to start praying the Rosary, because the Rosary is a prayer of humility.  If we’re struggling, for example, with pornography, we may want to get Covenant Eyes, which is accountability software, which treats us like adults and says we need help from another friend.  We may also want to take Faith Studies in July.

Going back to St. John’s Gospel, the first words in that Gospel are, “In the beginning.”  Do we know where these words come from?  They’re taken from the first book of the Bible, Genesis, where it says, “In the beginning when God created the heavens and the earth” (1:1).  Every Jewish person would know immediately what St. John was doing: By taking this phrase, St. John is saying there’s a new creation, a new beginning, redemption.

This is what every person needs and wants, a new beginning.  God is a god of new beginnings.  We’re unable to fix our problems, and so we turn to Jesus, our saviour.