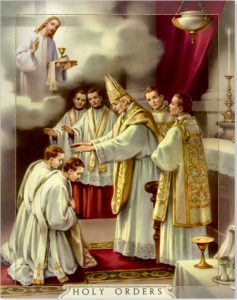 Would we be okay with our children becoming a priest or sister?  I ask because some Catholic parents love the priesthood and sisterhood, but not for their children.  Why?  “Because not getting married would be so hard.  They would be missing out on so much.”  Our mentality is that we’re going to find happiness when we get married, not through celibacy.

So it might surprise us that St. Paul teaches that celibacy is better than marriage.  In 1 Corinthians 7, of which we heard a part in the second reading, St. Paul has a long discourse on marriage and celibacy, and hopes that the Corinthians choose celibacy, if they’re able.  He says that those who marry do well, but those who refrain do better (1 Cor 7:38).

Now, obviously there are married people who are saints, such as our mother Mary, St. Joseph, St. Monica, Sts. Louis and Zelie Martin, St. Gianna Beretta Molla (See this website for a comprehensive list.)  We know that God created marriage and that it’s a road to holiness.  Consequently, the divided interests are not a problem with marriage in itself.  However, what St. Paul is pointing out is what we know from experience: Married people are often distracted by worldly concerns.  Should it be like this?  No.  But it often is.

Single people can also be distracted from God.  But St. Paul is telling us that, if we choose celibacy for God’s sake, then in some ways, it’s easier to focus entirely on God.  Many married people often say that there’s no time to pray and focus on God.  Most Catholics have never been taught how to prioritize God, how to pray, and once they get married, there’s little time to learn; they’re “anxious about the affairs of the world, how to please their spouses, and their interests are divided.”  So, St. Paul wants to spare people this difficulty.

2) The deeper reason why celibacy is objectively better than marriage is because, when we’re married, we’re married to a human, but, when we’re celibate, we’re married to God.  A religious sister once told me that her father didn’t want her to become a nun.  But when she persisted, he said, “Well, at least I can’t complain about my son-in-law.”

What is marriage?  People think it’s just when two people love each other—it’s much more than that!  It’s a sign of how much God loves His people, and how much His people should love Him (CCC 1617).  When God wants to show us how faithful He is, where does He tell us to look?  At married people!  When He wants to show how fruitful He is, where are we supposed to look?  Married people.

Jesus compares Himself to a bridegroom married to His people.  And when He died on the cross, St. Augustine saw it as the bridegroom giving up His body for His bride.  God created marriage to remind us that we’re called to marry Him.  But it ends with death, right?  “Until death do us part.”  Why?  Because, when we die, if we enter heaven, we’ll be married to God.  The sign passes, and we move to the deeper reality.

Cf. Leon Bloy: “There is only one sadness, it is to not be a saint.”

For example, being a bishop is objectively better than being a priest, but God doesn’t call all priests to be bishops.  Being a priest is objectively better, much better, way better, no comparison even to being a deacon.  But God didn’t call Deacon Andrew to be a priest.  Now why doesn’t that bother Deacon Andrew?  Because he’s secure in who he is and in his calling, and St. Paul also says that “each has his own special gift from God” (1 Cor 7:7).  The best vocation, subjectively, is the one God calls us to.  If marriage is your gift from God, rejoice! If celibacy is your gift, rejoice! This is your path to holiness.  What matters is not so much our state of life but our faithfulness to the script that God has written for us.

God today wants all of us to have a greater love for marriage and celibacy, and ultimately Him!

If God calls you to marriage, make Him the centre of your marriage from the beginning.  Last week, Jeff Adolfo, one of our servers at the 10 a.m. Mass, proposed to his girlfriend, Thea.  After Mass finished and everyone left, he gave me the box with the ring inside, then I was supposed to lead them to the altar, where I’d give him the ring and he’d propose.  I messed it up, but he still managed to propose in front of the altar.  The lessons here are to always start relationships with God in the centre, proposing in God’s house is a great sign of this, and don’t get a priest to help. 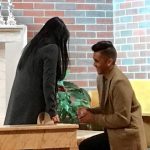 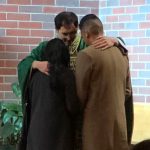 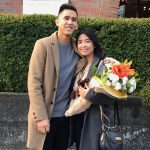 Also, whenever you have your marriage anniversary, come to Mass on that day—that’s the most spiritual way to bless your marriage.  I’ll do a blessing and renewal of vows during Mass if you’d like.  Make it an annual practice, so that God is the centre.

One common frustration for married couples is that they have never been taught how to be holy in their marriage.  So here’s one tip for young parents: One of the most common difficulties for parents is when their babies cry at Mass and they can’t concentrate.  The first thing to realize is that God doesn’t expect us to have 100% concentration when our kids are crying—that’s impossible.  He expects us to do two things at once: To take care of our children and do our utmost to pay attention to His Word and to pray.  So, be at peace: If you try your best to love, be patient, joyful and come to Mass for His sake, you’re giving Him incredible praise and this will be your road to holiness.  Obviously, take practical steps to focus more, take your child for a quick breather outside, etc.  And as your kids grow up, aim once again for complete concentration.  And, please, parents, unless there are very serious circumstances, always bring your babies to Mass—it’s part of bringing them closer to God.

All these truths about which we’ve spoken are very important if we’re single, because our culture tells us implicitly that we’re missing out.

Daniel Mattson, when he was about 15 years old, would often go to restaurants with his family, and one time saw the sound guy from his church sitting alone at the restaurant. He was flabbergasted because that man was middle-aged, bald, portly, and eating alone.  And Dan prayed, “Dear God, may that never be me.”  But now he’s middle-aged, bald, portly, living alone, often has meals by himself, and says he’s happier than he’s ever been.  How?

At the peak of his suffering, he decided not to go back to his gay lifestyle but try to understand suffering.  He started reading C.S. Lewis and Peter Kreeft, and then came across St. John Paul II’s writings, and he said it made sense of his life, even his sexual orientation!  Suffering is an invitation to be joined to Christ for the salvation of the world.  This touched him because it meant his suffering had a purpose and there was no greater purpose than to share in Jesus’ saving of the world.

So he started writing extensively and when his godparents heard about this, they invited him to go to a Courage conference, which is a gathering for Catholics with same-sex attraction, and what moved him was the Mass: The beauty of the church, the joy of the people, and the singing!  He realized that he belonged back in the Church and so asked his brother, “What do I do?”  His brother suggested that he go to Confession.  And Dan says, “There’s nothing more beautiful in all the Church, in my mind, than a Courage conference and especially Confession and Mass…  I have never felt more happy and alive than at that moment.”

And the next day, he felt even happier.  He started to see that all his gifts, including being a professional musician and having an incredible intellect, as well as his suffering, were part of God’s plan so that he could save souls with Jesus.

Brothers and sisters, happiness is available right now!  God doesn’t wait until marriage to give us happiness.  One of the greatest blessings for me was, when I was 19 and still struggling with becoming celibate for God, my brother came up to the seminary with his girlfriend.  And when they left, I was surprised that I didn’t feel jealous!  Why?  Because I realized that they have each other, and I have God.  If we try to find our ultimate happiness in other people, we’ll miss out on what God wants to give us.

Parents, if we have kids, let’s be open to wherever God is calling them, including celibacy.  We can modify the words of St. Paul and say to them, “If you choose marriage, you do well.  But if you choose celibacy, you do better!  And if you choose sainthood, you do best!