Ian Butler, a Catholic counselor in the U.S., tells the story of how he discovered a problem in himself that God wanted to fix.  When Ian’s son turned two and was now able to make choices, Ian took him to the fridge to choose yogurt (what fun!).  When he discovered, however, that there were ten cups of yogurt and that his son would have to go through each of them one-by-one, all the while leaving the fridge door open and wasting electricity, Ian actually started to feel despair!  This pushed a button in him, and so he snatched little John Paul away from the fridge, but then John Paul went back and started all over again.  Ian started slowly closing the door to force John Paul to choose.  When this didn’t work, he screamed, “PICK A YOGURT!!!”  John Paul froze.  His mom came and took him out of the kitchen while Ian, ashamed, sat down on the floor and asked himself, “What was that?  What just happened here?”

In the past few weeks, many people have asked me, “Father, why can’t there ever just be peace, a time when there are no problems?” or “Why is there always something going on?”  It seems many of us are suffering right now.

At the end of Ian’s description of his story, he says: “God will bless you with people who trigger you, because God does not like your peeves or your triggers; and the more squirrely your family was, the more of these things you’ll have.  And it will bless everyone for you to become aware and do something about them” (50:09, 1:12:00).  These words really speak to me: God is blessing us with people and situations that are triggering us, because God doesn’t like our buttons, but wants us to be truly free and find happiness even when things are going wrong.

Look at the attitude of the leper in today’s Gospel: He kneels before Jesus and says, “If you choose, you can make me clean” (Mk 1:40).  St. John Chrysostom points out that the leper asked Jesus with faith and left the healing entirely to Him (Ancient Christian Commentary on Scripture, Matthew, Ia, 159).  The reason the leper says, “If you choose,” is because he knows that maybe Jesus doesn’t want to heal his leprosy!  Why? 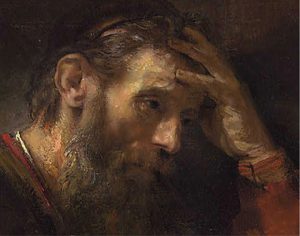 Do you remember when St. Paul had a thorn in the flesh?  Three times he asked Jesus to take it away, but, like the leper, St. Paul asked with faith, knowing that Jesus may not take it away.  And Jesus chose not to take it away, but said, “My grace is sufficient for you, for my power is made perfect in weakness” (2 Cor 12:9).  St. Paul writes that God allowed this suffering to keep him from becoming proud.  He had been given so many spiritual gifts, including supernatural experiences of heaven, that there was a risk he would become haughty and arrogant.  And so God allowed the suffering to keep him humble.

In the same exact way, God sometimes allows suffering or people to trigger us because He wants to heal something in us.  The problem with Ian wasn’t his two-year old son taking forever to choose yogurt.  The problem was inside of Ian: that he had this irrational fear that leaving the fridge door open for a minute would be catastrophic, so catastrophic that he had to shout at his son.

The Catechism points out that Jesus didn’t come to heal every physical disease and suffering.  He came to free us from the greatest evil, which is… sin (CCC 549).

Someone recently reminded me of something I said three years ago: There are worse things than suffering.  Such as what?  Pride, arrogance, laziness, cowardice.  You see, resentment and lack of forgiveness are more deadly than cancer.  Loneliness is more painful than hunger.  From an eternal point of view, selfishness is worse than AIDS.  Anger and judgmental thoughts hurt more than migraines.  This might sound strange, but looking lustfully at people is worse than being blind.  Why?  Because it causes more harm when we take advantage of people sexually.

Imagine there’s a man whose relationship with his children is terrible.  He hurt them when they were young by emotional abuse, rarely being affectionate, and never apologizing.  When the children grew up, they resented their father and hated him.  Then he gets terminal cancer.  Now, which would be the greater healing: healing the cancer or healing their relationship?  And, if knowing that their father was going to die soon were the only way to get him and his children to talk, forgive and make peace, then the cancer would be an occasion of healing.

I know this may be cold comfort for someone who’s suffering, but, if we’re able to talk to Jesus about it, it could be the beginning of something beautiful.

I always tell God my problems while He listens lovingly.  And then I ask, “Father, what are You trying to heal?”  Recently, for example, I got a little embarrassed because I made a mistake and looked bad in front of someone else.  But I quickly thought, “Lord, You must be trying to heal my pride.”  Because a good way to heal pride is when we get embarrassed.  And as Scott Hahn would say, “It hurt oh so good!” 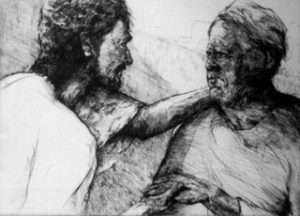 I’d like to recommend that we use the story of Jesus and the leper as a basis for our prayer this week.  In our imagination, we should imagine that we’ve got all these problems.  And then we go to Jesus, kneel before Him, and humbly say, “If You choose, You can make me clean.”  Then Jesus will look at us with a smile, will reach out His hand and touch us the way He touched the leper, and He may say, “I do choose.  Be made clean!” or He may say as He did to St. Paul, “My grace is sufficient for you, for my power is made perfect in weakness.”  Either way, He’ll do it out of love.  But listen to what He wants to heal.

How quickly can we re-group and get to this point of prayer?  As soon as something angers or hurts us, then we move to prayer—this should be a reflex.  And this prayer reflex should get faster with time.  Eventually, we’ll start praying within minutes of getting triggered.

Lent is starting this Wednesday.  This is a season where we turn away from sin and turn more towards God.  The 40-day period is based on Jesus’ going into the desert for 40 days to prepare Himself for His mission.

Since it’s a time of purification, the Church asks everyone between 18 and 59 years old to eat only one full meal and perhaps two smaller ones.  Why?  Because fasting heals our lack of self-control.  For the same reason, she asks everyone 14 years and older not to eat meat.

It’s true Ash Wednesday will also be Valentine’s Day, but God comes first.  We can do both by harmonizing the two.  One writer suggested, “There’s no reason why husbands can’t buy their wives flowers on Ash Wednesday or, better still, as it’s a day of penance, they could also offer to scrub the [toilet] or take on some other chore that they don’t usually do.”  This writer also talks about “a boy at university who wrote 20 Valentine’s cards for his new girlfriend.  When… asked… why he was sending so many, he explained that she had never received one before and so he was making up for every year missed.”  Ahh…

But the question still remains: Where does God want to heal us during Lent?  We all have to do some spiritual practice.  Most people don’t give God enough time in daily prayer—perhaps that’s one way.  What about reading a Catholic book?  What about coming to Stations of the Cross on Tuesday night and then Mass afterwards? 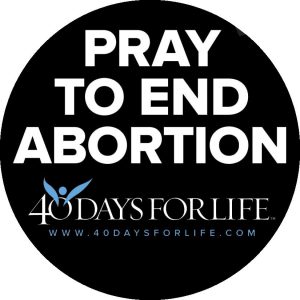 We have 40 Days for Life this Friday and Saturday and we need more people to sign up.  There are slots right now where there is only one lady signed up and we should not allow anyone to be alone.  Could this be the way we grow in Christian confidence and break perhaps an apathy?  13,998 lives have been saved, 170 abortion workers have quit their jobs, and 94 abortion centres have closed due to 40 Days­—that’s amazing fruit.  If you’re like me, you’re wondering how they know these numbers?  So I e-mailed them and they responded, “People have told us.”

One of our parishioners has a son who’s in jail.  Think about that for a moment: No matter what he did or how long he’s in jail, imagine how difficult this is for our parishioner and her family.  Once, while talking, she said something that was deeply inspiring: When she goes to Mass, as hard as it is, she doesn’t let her son’s situation disturb her.  It’s an hour she treasures, and she also goes often to daily Mass.  There she’s just quiet with God, rather than nattering on—that’s amazing: She’s peaceful even in the midst of chaos.  Through this situation, God is healing her lack of faith, and, now that I share this with our whole community, this helps heal our lack of faith, because none of us has the level of faith we should have.  What God is doing in her life now heals us, and that spiritual healing can last for eternity.