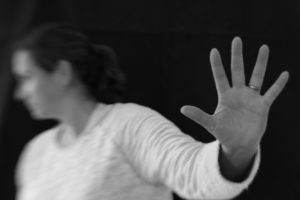 There are three groups of people that need to hear the same message.  The first are people living with guilt.  During 40 Days for Life, while we were praying, a woman called out to us from across the street, “I had an abortion and I’m happy about it!”  I didn’t know if I should respond, but my intuition was that she was not happy about it, and, by calling out to us what she wished she felt, she was trying to lessen her pain.  And so, in my heart, I wanted to walk up to her and give her the message, “God loves you.  You can be forgiven,” but she was in her car, talking on the cell, and then drove off.

The second group of people that need to hear the message of God’s love is us.  We can never hear this message too much, because it’s the foundation of who we are.  For example, Vernon Robertson, who’s speaking to us this week, tells us that many parents pray for their fallen-away children to come back to Mass—he says we shouldn’t pray for this.  Why?  Because Mass is the fruit of encountering God’s love.  Pray that they encounter that love first, and then they’ll come back to Mass!

The third group of people is those who are suffering.  You may remember that one of the conditions for understanding suffering is God’s love.

Jesus says today, “God so loved the world that he gave his only-begotten Son, so that everyone who believes in him may not perish but may have eternal life.  Indeed, God did not send the Son into the world to condemn the world, but in order that the world might be saved through him” (Jn 3:16-17).

This is the central message of Christian faith, what is called the ‘Kerygma,’ and I want us all to learn the technical word because it’s going to be something to which we come back.  We can break it down and simplify it into four parts: 1) God created us because He loves us and wants to have a relationship with us; 2) That relationship is broken by…? sin; 3) God sends Jesus to restore that relationship; 4) We’re personally invited to accept the gift of salvation. 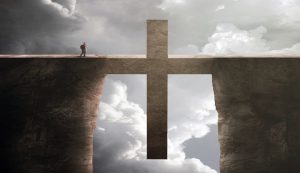 1) The Kerygma is really important for that woman at 40 Days for Life because she probably doesn’t know that God made and loves her, and that Jesus came to bring her home. She may not even know she needs to hear this, because everyone in our culture acts tough and looks as if they have it together, but, deep down, because our conscience is always active, we carry a burden of guilt that we try to ignore.  And nothing can take away that guilt except God.

Pope Benedict said, “Under a veneer of self-assuredness and self-righteousness, the man of today hides a deep knowledge of his wounds and his unworthiness before God.  He is waiting for mercy.”   That’s why so many people love Pope Francis’ line, “Who am I to judge?”  They’re afraid of judgment, and they feel as if they’ve been offered mercy and that’s a relief!

The Kerygma affects the way we love people.  For example, one Catholic principal said: Whenever a kid gets in trouble at school and gets called to the office, he prays with the child first because he wants the child to know that he or she is loved, and only then does he say to them, “There are going to be consequences but I want you to tell the truth and face them head on.”  What is he doing?  He’s starting with the Kerygma! 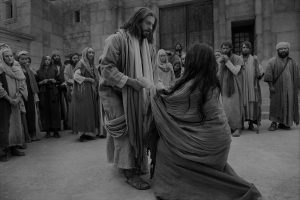 This is what Jesus did.  When the woman was caught in adultery, He didn’t say there’s nothing wrong with adultery; on the contrary, He said, “Do not sin again.”  Why?  Because even she knows she’s guilty.  But first, He got the scribes and Pharisees to lay down their rocks, and then He said, “Woman, where are they? Has no one condemned you?…  Neither do I condemn you; go, and do not sin again” (Jn 8:10-11).  That’s the Kerygma in action.

I wish we could go out to all the world and hug people who feel guilty and tell them, “God loves you, He wants to forgive your sins.”

2) The Kerygma is also important for us, because we can never hear the foundational message too often.  When priests, deacons and sisters go on retreat, with what do they start?  The basics.  I go on retreat and the first meditation the priest gives me is that God created me in love.  I don’t mind hearing it again because the point is to understand it more deeply!

One reason why many Catholic kids fall away from the Church is because they don’t get the fundamental ideas.  We teach them about the 10 Commandments, the 7 sacraments, the 4 Gospels, the 12 apostles, 73 books of the Bible, the 8 beatitudes, etc. but they have no context in which to put them.  They don’t understand who created them.  If you ask, “What’s the meaning of life?” they’re stumped.  However, in the past, Catholics would be taught the famous Baltimore Catechism.  If we were to ask them question #6, “Why did God make you?” they’d say immediately, “To know Him, to love Him, and to serve Him in this world, and to be happy with Him forever in heaven.”  (If we get that, then all the rest, including God’s commandments, will make sense.)

Furthermore, we don’t just know God in an abstract way, as I know about Queen Elizabeth.  We’re talking about actually encountering Jesus in a real, personal way.  That’s why Alpha and the first level of Faith Studies are so important, because they provide this encounter that most of us never got; they establish the foundation, and that allows us to really grow spiritually.

My father grew up Catholic, but hated the Church and didn’t want me and my brothers baptized.  He said he always thought Jesus was a good story.  Then my mother went back to Mass after 17 years, I went back, then my oldest brother went back, then my middle brother.  My dad was now outnumbered four to one!  We tried to convince him that God loves him, that the Catholic faith makes sense, etc., but nothing worked.

At a low point in his life, my mom asked if he wanted to take Alpha.  He said he didn’t want anything heavy.  She said it wasn’t.  So, he gave it a try, and the videos made so much sense to him.  The speaker, Nicky Gumbel, was a former atheist and a lawyer, and was so rational!  He showed how there’s actual evidence for Jesus’ existence, and my father found that fascinating!  And then he met other Catholics who were humble and helped him understand how God could allow suffering.  He started going back to Mass, and started changing because He actually encountered Jesus.

3) We talked about this three years ago: One of the conditions for understanding suffering is knowing that God loves us.  There are different levels of happiness and God’s constantly trying to move us to higher levels.  We don’t have to suffer forever; it’s just for a short time while on earth.  And God, in His wisdom, allows suffering to let us define who we are, because you only find out who you really are when you suffer.  We find out who are the truly patient people when we’re under pressure, who really has courage when we have fear, who’s a person of principle and who’s not when we’re tempted to sell out.  Suffering builds character, but it also reveals it.

We talked about a parishioner here who was devastated when she learned her son was severely autistic and she couldn’t stop crying for two years.  Life was harder in every way.  She begged God to take the cross away, but later changed it to, “If You are not going to take away this cross, then please help me.”  All that time, she couldn’t see that God was blessing her because she was focused on worldly happiness.  As she slowly focused more on God, she saw deeper hidden blessings.

The breakthrough came when Fr. Anthony Ho explained that some children who are developmentally disabled may not be able to commit mortal sins, while others who lack the use of reason aren’t able to sin at all because they don’t understand what they’re doing.  This means that they’re saints (not canonized saints) because they’ve never lost the holiness of their baptism.  When they die, they’ll go straight to heaven. (It’s also important to mention that, in heaven, they’ll be in a state of perfection, meaning their disabilities will no longer impede them.  Just as there’s no blindness in heaven, so there are no developmental disabilities.  We’ll see our children in their perfect manhood and womanhood.  This beautiful truth applies to those of us who have also lost children during miscarriages.  If we reach heaven, we hope we’ll get to see them for the first time).

Because of this she realized: “My son’s a gift.  My child is going to heaven, he’s a saint.  When I learned that through Fr. Anthony, it all came together.  This was no longer suffering.  That peace, happiness was indescribable.  God sent my son here to help me get to heaven.  If he didn’t have autism, we would have stayed with superficial friends who spend their money on clothes, spend carelessly on shoes, watches, and cars, done fun but meaningless things.  Now we’re with people who are close to God, now I value things that really matter.  God loves me enough to give me my son.  I have a feeling that if I didn’t go through this, I wouldn’t have a good shot at heaven.”

The fourth point of the Kerygma is that Jesus invites us to accept His offer. We can say “no,” because no one’s forced.  Or we can wait until we’re ready.  However He’s hoping that we say “yes.”

This is an example of prayer that many Christians use, and it’s something we all could pray in our hearts, or do it in our own words: “Father, I believe that You know me and love me.  I am sorry that I have not always chosen You, and have broken my relationship with You through my sins.  Thank You for sending Jesus who proved Your love for me on the Cross so I could be forgiven and set free.  Lord Jesus, I open the door of my heart and I invite You to be at the centre of my life – to be my Saviour and my Lord.  I put my trust in You.  Direct me by Your Holy Spirit and help me to live the Gospel with my whole life.  Amen.”

The Kerygma makes life better!  It gives meaning, helps us discipline our children, love people who feel guilty, helps us thrive when we’re suffering, and much more.  The foundation of our faith is encountering the living Jesus and His love for us.