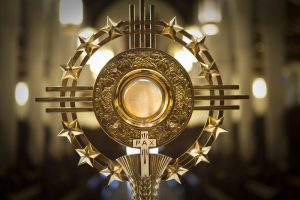 Have we ever had to tell someone that they shouldn’t receive Holy Communion at Mass?  In one of my summer jobs, I lived at a camp for eight weeks, so, on Sunday, I asked my boss if I could take time off to go to Mass, and, to my surprise, a non-Catholic co-worker asked if she could come!  “Of course!” I said.  However, when I told her she couldn’t receive Holy Communion, she didn’t understand why, because, in her church, anyone can receive.  She insisted but I had to stand firm.

How would you explain the situation if your friends wanted to receive?

Today is the Solemnity of Corpus Christi, Latin for “Body of Christ,” and our answer is because the Eucharist is a covenant.  Jesus says today, “This is my Blood of the covenant, which is poured out for many” (Mk 14:24).  The Eucharist is not just a gift: A gift is something we receive, but a covenant is when people become family.  For example, when we get married, that’s a covenant, joining two people into one family.  When we adopt a child, that’s a covenant, bringing them into our family.  And when God makes a covenant with us, He’s making us part of His family.

Every covenant involves responsibilities: We promise to give ourselves to the other person.  So, when Jesus gives us the Eucharist, He’s pledging His life to us!  That means, when we receive the Eucharist, we have to pledge our whole lives to Him (Bishop Daniel Mueggenborg, Come Follow Me, 131).  This is incredible news!

Non-Catholics can’t receive Communion because they haven’t yet entered the covenant.  Does this mean God doesn’t love them?  Of course not.  Nevertheless, if they want to receive the sign of the covenant, then they have to enter the covenant.  How?  Through baptism.

Now some say we should be more welcoming.  After all, Jesus welcomed everyone.  But not at the Passover meal.  It says multiple times today that Jesus was celebrating the Passover, and the Passover was a family meal not open to everyone.

Think about the difference between blessings and sacraments.  Catholic priests will bless anything of any non-Catholic: their homes, cars, pets.  Why?  Because God wants to bless everyone!  However, we won’t give them the sacraments, which are signs of the covenant.

(By the way, did you hear the joke about the man whose dog died?  He went to his priest and asked the priest to do a funeral for his dog, and the priest said, “I’m sorry, sir, but we don’t do those kinds of funerals.  Maybe you could go to the church down the road; maybe they’ll do something for you.”  The man said, “Okay, thank you, Father.  Do you think $500 will be enough for them?”  And the priest said, “Sir, you didn’t tell me your dog was Catholic!”) 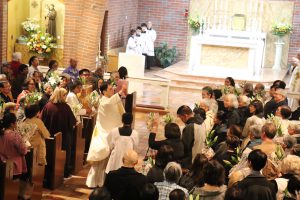 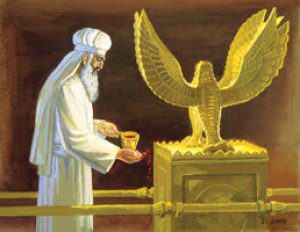 In the First Reading, God’s also making a covenant with the Jewish people.  Moses takes the blood of the sacrificed animals and sprinkles it on the altar and on the people (Be thankful that priests bless us with water).   Why?

2) There’s another reason: By being sprinkled with blood, the people were saying, “May our blood be shed, like these animals, if we fail to keep our covenant commitments.”  A covenant means: “We’re all in.  We’re so committed that, just to prove it, we’ll take a punishment if we fail to keep it.  We love you so much that we’d rather die than hurt You.  As a sign that You can trust us: Cross our hearts, hope to die.”

This applies to us Catholics: If we break our covenant with God by doing something gravely wrong, that we knew was wrong, and freely chose to do it anyway, then we cannot receive Communion.

If a husband breaks his covenant by adultery, he cannot receive the marital love of his wife until he apologizes and makes amends.  If we put ourselves outside the covenant by our own free choice, we can’t receive the sign of the covenant, the Eucharist.  If we miss Sunday Mass through our own fault because we didn’t value it enough to make a sacrifice to get there, then we can’t receive Communion until we’ve apologized in Confession and made amends.  And God is waiting for us to come because He wants to forgive us.

Now here are our action-items to help us love the Eucharist, which is the absolute centre of our parish; we are going to make the Eucharist the most important factor in our parish because it’s Jesus Himself.  This is not a symbol.  Jesus said, “This is my Body”; in John 6, He told us His body is true food; and people knew He wasn’t using symbolic imagery because they left Him over this teaching; and for the first 1,100 years of Christianity no one denied this. 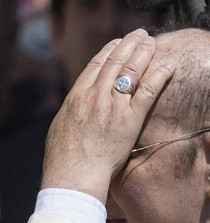 1) Remind people: If we ever invite a non-Catholic friend to Mass, a wedding or a funeral, then we show our love for the Eucharist by lovingly pointing out that they can’t take Communion.  If we have a friend who’s Catholic but we both know they don’t practice the faith, then we remind them, too.  Show them instead how to do a blessing!  Deacon Andrew’s wife, Stella, once told me she was in great pain, and, at a certain Mass, chose not to receive Communion, so when I blessed her, she was healed!

Now, let’s say our adult children go to Mass once in a while.  In this case, we tell them clearly and gently one time.  If they choose to commit a sacrilege (which means taking something holy and sacred, and treating it as if it’s nothing), it’s their choice, but we pray they don’t.

2) Don’t think about who receives and who doesn’t: Two years ago, we said there are other reasons for not receiving the Eucharist: We haven’t fasted an hour before Communion, we showed up late for Mass and choose not to receive, we feel our hearts aren’t spiritually ready, we committed a sin and, even though it’s not mortal, we don’t feel we’re in the right state to receive.

Therefore, let’s not think about who’s receiving and who isn’t because we don’t know why.  We parents, for example, may think we know why our children aren’t receiving, but actually, we don’t.

I knew a young lady who had an eating disorder, so sometimes she wouldn’t receive the Eucharist.  Her mother, being both concerned and wise, asked, “Is it because of your thoughts (on the way she saw her body) or because of something spiritual?”  The daughter answered, “It’s something spiritual,” and the mother left it at that—no more questions.

The only exception I can think of is at our famous Pancake Breakfasts, when someone is eating before Mass and clearly breaking the one-hour fast.  If we see them, then we should remind them that they shouldn’t receive Communion, and I’m sure they’d appreciate the reminder.

Generally, when someone doesn’t receive the Eucharist, it shows a great respect for the Eucharist—that is to be admired!  That’s why we never have to be worried about what other people think if we choose not to receive, because we’re showing how much we love the Eucharist!

So, we need to ask Jesus for a hunger to receive Him.  There’s a spiritual 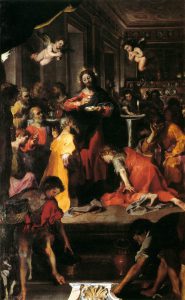 This famous painting done in 1608 by Federico Barocci, is going to be our model for receiving the Eucharist with hunger.  The painting is called The Institution of the Eucharist.   The pope who commissioned it wanted a bigger Eucharist, to emphasize that it’s really Jesus, against the Protestant Reformation, which said it’s only a symbol.

However, Barocci responded with 3 subtle triangles to get our attention.  The biggest triangle extends from Jesus’ head to the two boys at the bottom, with the one on the left carrying bread and the one on the right with an ewer of wine nearby, which represent the offerings for Mass that will be transubstantiated.  That reminds us that when we come to Mass, we need to bring all of our joys, sorrows, hopes and desires, as well as our work and sacrifices and unite them to Jesus on the altar.  Hungry people do this, because they want to give Jesus their lives and receive more.

The second triangle is from Jesus’ head to St. Peter and St. John, both bowing low in adoration.  This reminds us why we all receive the Eucharist kneeling, because we’re really receiving Jesus!  And, twice before, I’ve suggested receiving Jesus on the tongue.  Not because it’s holier, but because the sign value is clearer—this is something so special that we receive it in a special way.  It also helps prevent dropping Jesus and it’s a great example for our children.  Whichever way we receive, we do so with love.

The third triangle is composed of Jesus’ head and arms, framing the Eucharist and focusing our attention there.  It seems to me there’s a fourth inverted triangle with the angels that serves the same purpose. 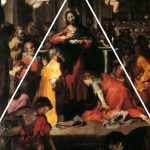 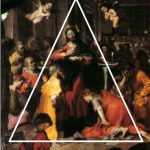 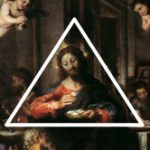 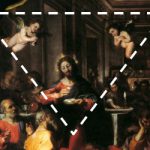 Jesus wants to give us everything!  But we only receive everything if we enter and keep His covenant, if we give Him everything.