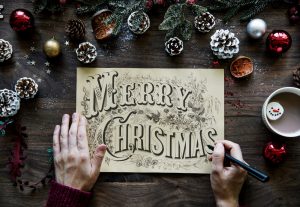 How many of us feel confident about saying “Merry Christmas” to people at work, in the stores, anywhere in public?  We may hesitate because we’ve bought into the lie that we might offend someone; I, too, have sometimes hesitated.

We need more confidence as Catholics, especially when it comes to being open about our faith!  Here’s a video from Dennis Prager, where he argues that we should say “Merry Christmas.” Brothers and sisters and dear guests, it’s not about imposing religion, but about Christmas being the reason for the season, about feeling confident as Christians, and about expressing a part of who we are.  Dennis Prager isn’t a Christian, but thinks we should be able to talk openly about one of our most important national holidays. Even though the video is made for the U.S., the arguments apply to our situation here in Canada.  The video starts from where he responds to the argument that “Merry Christmas” doesn’t include everyone. (View video from 3:11-5:05.)

Our Lord Jesus today is trying to give us more confidence in who we are as His disciples, and in our mission to proclaim Him in every circumstance.  There are three parts to strengthening us:

First, the Gospel talks about a calling, “The word of God came to John son of Zechariah in the wilderness” (Lk 3:2).  John is like the prophets in the Old Testament who received God’s word and were told to share it.  This reminds us that we’ve received the Good News and that Jesus has given us a better life.  As we approach Christmas, now’s a time to be more grateful to God.  For what are we most grateful?  Salvation, a better life, His love,  His plan for our lives?  Or is it something as simple as what He did for us last week?  As we’ve said before, our call is to share joyfully what we’ve received. 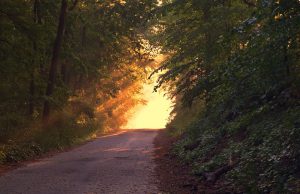 Second, there’s a preparation: “John went into all the region around the Jordan, proclaiming a baptism of repentance for the forgiveness of sins, as it is written in the book… of the Prophet Isaiah… ‘Prepare the way of the Lord, make his paths straight. Every valley shall be filled, and every mountain and hill shall be made low” (Lk 3:3-5).

The “baptism of repentance” refers to a washing of the body to signify spiritual and moral cleansing, because we need to turn away from sin and change our outlook in order to receive Jesus.  When it says, “Prepare the way of the Lord, make his paths straight,” this comes from a practice in the ancient world to prepare roads for visiting kings so that they’d feel welcome.  “People would… beautify their homes and public buildings to make their city pleasing to the king” (Daniel H. Mueggenborg, Come Follow Me, Liturgical Year C, 6). Jesus, our King, is coming, and we want to prepare our souls and those of others to meet Him.

Our confidence in evangelization comes from our calling and God’s promises.  If we help prepare our souls and those of other people, great things will happen!

Last week, we talked about all of our preparation to become an invitational church, about praying for the people we love, that they come home or come to know Jesus.  Today we’re talking about inviting them to Christmas Mass out of love.  I asked earlier if we have the confidence to say, “Merry Christmas.”  Now I ask if we have the confidence to invite people to Mass.

The vast majority of us have the gift of faith thanks to someone’s invitation, whether it was our parents’ rearing us Catholic or someone’s inviting us to go deeper in our faith.

There were two fundamental invitations in my life that led me to be a disciple and a priest.  I was baptized as a child but never reared Catholic, and so I never knew Jesus, until one day my godmother asked, “San (my Chinese name), do you want to get confirmed?” I said, “Sure.  Why not.”  That put me on the path of being a disciple!  But my vocation started from a second invitation.  I didn’t enjoy my first youth group retreat when I was 15, so I never went back to the youth group.  But the youth minister, Richard Vetter, called me the next summer and asked me to give it a second chance.  He said all the teens whose behaviour I found shocking had left.  So I gave it a try and, while on retreat, one Confession changed my life.

These invitations were absolutely necessary.  Could God have worked in another way?  Yes.  However, we can also miss God’s calling if we don’t invite people. 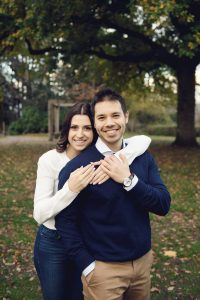 And I learned something amazing two weeks ago.  This is Matthew and Natasha; they’re getting married next year.

But they would never have met if Richard Vetter had not invited me to that retreat in 1996.  How so?  You see, I served at Natasha’s parish in Port Coquitlam some years ago and she said I was one of God’s main instruments in bringing her closer to Jesus, which included inviting her to join youth ministry as a leader.  After she got closer to Jesus, she started going to CCO events where she met Matthew, who’s the son of Richard.  So, if Richard had never invited me to that retreat, I would never have become a priest, and would never have helped Natasha, and no one else would want to marry his poor son!  This is the power of invitation and God’s providence!

So please invite teenagers to Mass because a teenager may become a priest who will be instrumental in helping your child find a spouse!  Jesus is asking us to prepare His way by inviting people to Christmas Mass.

So, how do we do it?  1) Invite people the way we’d like to be invited.  If we were to get invited to a friend’s church, we’d want it to be done out of love, not to be sold something, but because a friend truly cares about us. We wouldn’t want any pressure.  2) Be the best version of yourself.  We all have unique ways of loving people, so be natural.  Be joyful and virtuous, because that’s a powerful witness.  3) Tell them what it’s about: we’re going to have Mass (a service) and it’s a great way to spend Christmas, hear a good message, and be with great people.  If they’re looking for a spiritual home, they’ll be welcome here.  And then give people a chance to think about it.  For some people, we’ll know not to ask them again, while, for others who show openness, we may want to follow up with them.

Like St. John the Baptist, we’re just the preparers.  Once we invite, we pray for the person, and leave it to God.

We’re all afraid of rejection, so realize this: It’s not about how many people come, it’s about how many people we love, pray for, and invite.  It often happens that ten people will be invited and only one says, “Yes.”  After several invitations and rejections, we’ll get used to inviting and not feel personally rejected anymore even when only one out of ten comes.  These ideas have helped me become more confident, so much so that, while getting a haircut recently, I invited someone to Christmas Mass.  We do our part and God will do His. 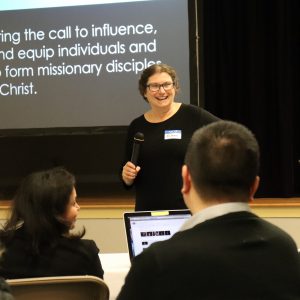 When I was tempted by doubt about confidently evangelizing and inviting, my Divine Renovation coach, Eileen, said to me the following, and so I say it to you: “Don’t hold back the Holy Spirit.  He will send people to your parish.  Just invite—that’s your responsibility.  It’s up to Him to help them take the next step.  We all have the sacrament of Confirmation—we should lean into the gifts it gives us.  You have something worthy you are inviting them to.  You’ve got an awesome parish, something to share.  The Holy Spirit has bold plans.  He’s going to send people.”

Two weeks ago, Jack  was baptized.  Coming to this point was a 16-year plus process!  He and his wife, Pollyanna, are now going to share how invitations played an important role in leading him to Jesus and the Church.

Jack:  From the beginning of my journey to faith, I was blessed with many invitations, some welcome, most more “naggy”. A most welcome one was from my future wife, who invited me to consider joining her at Mass on our first date, probably as a test, to see if I’d run away. But I didn’t. Then came my first invite to dinner with a Catholic priest, then a nun invited me into her home, followed by an invitation to play golf with Bishop Gary Gordon!  For a young man, at the time very aware of his own brokenness, this was hugely edifying.

Pollyanna:  While we were dating, I was actively involved with prison ministry but Jack wasn’t that interested. One year, however, I helped serve Christmas dinner at the youth detention centre, so I extended the invitation to Jack, and to my surprise, he said Yes!

Jack:  Next, an important invitation came from Talitha Koum, a halfway house that offers healing to women in conflict with the law and dealing with abuse and addictions. I went to a gathering there and heard the testimonial of a 16-year old who had been trafficked all the way from Newfoundland to Vancouver because she was locked in a struggle with addiction.  That invitation opened my eyes to the healing power of God.  I learned that the woman who founded Talitha Koum had received deliverance from pain and anxiety while in detox as a prison Chaplain prayed over her. I decided to join the Board of the organization and served for many years.

Pollyanna:  Two years after we got married, in 2009, Murray, whom I met through work, asked me if he could invite Jack to Alpha. For years, Murray would always find ways to encourage Jack to be closer to Jesus. God bless Murray because, with his many commitments, he still gave 12 evenings to journey with Jack.

Jack:  The timing was amazing because, soon later, while we were driving to St. Mary’s in East Vancouver, we hit an elderly couple crossing the road where they shouldn’t have been. The man died at the scene and the woman spent 8 months in hospital.

Pollyanna:  The accident affected us deeply.  It was particularly difficult for Jack to comprehend.  I remember his asking me, “I thought we were on our way to do God’s work, how could this happen?” 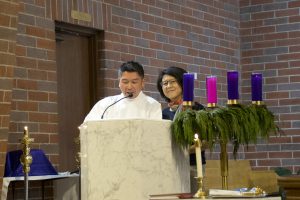 Jack:  Three years of intense pain and darkness followed. The police, ICBC and the courts found me not at fault, but that was little consolation as we grieved for the other couple involved.  I didn’t want to carry on, we lived on the 19th floor, it would have been easy to end it all, but the Church teaches a better way, to lean on Jesus and His ultimate sacrifice, to lean on the support of the Catholic network built up around us: My Alpha group, the priests at St. Mary’s, especially Fr. Pierre, and others walked with us, prayed for us, and enabled us to carry on when there were a million reasons not to.  I’m so grateful now for those invitations, and so happy I said, “Yes,” because without them, I wouldn’t have been able to make it through.

Pollyanna:  One priest often tells our story this way: a guy fell in love with a girl and he fell in love with everything the girl loves.  If you love Jesus, your family and friends, we hope you would consider inviting them to Christmas Mass this year.

Jack:  Jesus, our Catholic faith, and the entire community of St. Anthony’s could be that saving grace for someone in your life when they’re struggling as I was, but it won’t happen without your extending an invitation.

Both: Thank you and God bless!