Let’s start with a short history lesson of the Church in North America.  The Church was, in many respects, at her peak around 1965.  Numerically, the Church was thriving (E.g. In the New York archdiocese, in one year,  55 men were ordained!)  The majority of Catholics trusted the Church and followed her teaching.  They had a strong identity: On certain Friday flights from North America to Europe, planes would not serve meat. Why?  To accommodate Catholics, who never ate meat on Fridays. 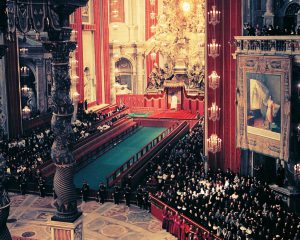 However, after 1965 and Vatican Council II, the Church underwent a huge upheaval and has been dying.  The teaching of the Church became watered-down.  Devotional practices were lost.  For example, Catholics started eating meat on Fridays on condition that they would do another penance.  Yet, no one knew what that meant, so everyone stopped doing penance on Fridays.)  Priests didn’t talk about sin anymore.  A priest once told me, “We had no idea what we were doing back then.  The mantra was, ‘Be yourself, be yourself.’  But, what if you’re a jerk?”  It doesn’t work!

Nevertheless, some Catholic churches are growing, and it’s those with clarity about who they are and how to live: They talk about Jesus, about right and wrong, they go to Confession, etc.  In our archdiocese, all the young leaders and young priests are more theologically conservative than previous generations.  They’re hungry to follow Jesus and want clarity, and, if they don’t get clarity from the Church, they’ll go elsewhere.

Brothers and sisters, dear guests, the human person needs clarity!  The best athletes always want clear plans about training and how to win.  Would you like to work for a boss who’s clear about deadlines or one who’s not?  Some friends once told me about the worst homily they ever heard (It was at a local church)!  “The worst ever?” I asked, “Because there are lots of homilies vying for that title.”  “No, it’s true!  The preacher talked about how he went on this fishing trip and it had nothing to do with the readings, and he had no idea where he was going.  It was so bad!”  Who wants homilies like that? 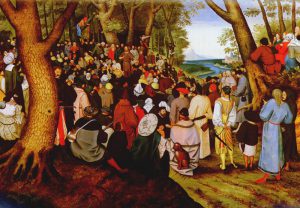 Today, the Lord is offering us clarity about who you and I are called to be.  We start with the crowds in today’s Gospel.  “The crowds, who were gathering to be baptized by John…” (Lk 3:10).  This group is made up of all sorts of people who were motivated enough to leave their daily work, lose time, and maybe even suffer loss in order to go to the river Jordan—they’re hungry.  Why?  Because they “were filled with expectation, all were questioning in their hearts concerning John, whether he might be the Messiah” (Lk 3:15).  They’re wondering, “Is John the anointed one, who will save us?  We’ve been told all our lives that he’s coming.”

St. John personalizes the answer for each group:  The crowds are to practice generosity (“Whoever has two coats must share with anyone who has none; and whoever has food must do likewise” (Jn 3:11)); the tax collectors are supposed to be honest and avoid greed (“Collect no more than the amount prescribed for you” (Jn 3:13)); and the soldiers, who would get paid very little, were supposed to be content with what they had and stop abusing their authority (“Do not extort money from anyone by threats or false accusation, and be satisfied with your wages” (Jn 3:14)).

One of my greatest joys when I went to the seminary was being told how to become holy.  I was always wondering, “How do you become a saint?”  And P. Peter said, “St. Thomas Aquinas says love means to will the good of the other—that’s the definition (Cf. CCC 1766).  If we want to become a saint, focus on the good of other people,” not on ourselves and what feels good, but on what is good.  So, when we look at someone, we think, “What would be good for him or her?”  More importantly, what would be the highest or eternal good for them?  How can I love them as Jesus does?  How can I bring them closer to Jesus?

As we continue our Advent preparation for inviting our loved ones home or inviting them for the first time, and we’re all getting ready to meet Jesus, we pray, “Lord, what should we do?”  First, change our mind-set.  Inviting people in a loving way is now part of who we are.  Remember, St. Paul VI said, “Evangelizing is… the grace and vocation proper to the Church, her deepest identity.  She exists in order to evangelize, that is to say… to preach and teach, to be the channel of the gift of grace, to reconcile sinners with God, and to perpetuate Christ’s sacrifice in the Mass” (Evangelii Nuntiandi, 14).

Second, we’re a confident group here, who doesn’t mind saying, “Merry Christmas.” Could I ask how many people have extended an invitation to someone to come to Christmas Mass?

Third, when our loved ones come, let’s be clear about doing the following, much of which we’ve already discussed, and is all part of loving as Jesus:

1)  Could we, for Christmas Mass, park farther away from the church?  Other invitational churches do this.  They park away so that guests can get the closer spots.  I’ll do this with my car.  It’s a small action but this is willing the good of our loved ones.

2)  When we come to Mass, let’s pray right away, giving our burdens and pains to God, uniting ourselves to His Heart, and praying to see the face of Jesus in everyone we meet. We’re all burdened sometimes, so we’re going to ask Jesus for help to choose the good.

3)  When we’re outside, let’s greet people, ask their names, and wish them, “Merry Christmas” (but not now at church while it’s still Advent!).  Inside, let’s smile and acknowledge people.  We always try to maintain silence in church because we’re in God’s house, but we can also show a heart that cares for people by smiling, and quietly whispering if necessary.

4)  Let’s move to the centre of the pew so that people don’t have to jump over us—this is a welcoming gesture that says, “Come sit with us.”

5)  Let’s shake hands during the Sign of Peace because it’s a virtue in our culture.  But don’t pressure people who aren’t yet ready, or because of health reasons. 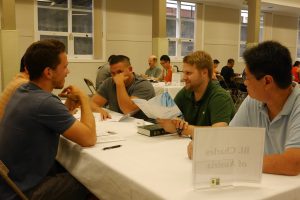 6)  After Mass, if God arranges us to meet someone, let’s say something such as, “Merry Christmas!  It’s great to meet you!  Hope to see you again.  I’ll pray for you this week” and then do it!  And if God opens a door, figuratively speaking, we can invite them to the Pancake Breakfast on Jan. 6 or to the Faith Studies on Jan. 29.

I want to thank you so much for trying to grow in holiness and mission!  You’re all doing amazingly well!  God is doing great things and we have the greatest gift to share: Jesus. 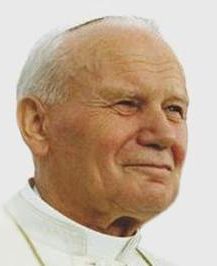 Let’s end with a 5-minute video about St. John Paul II, how he touched the heart of a Swiss Guard on Christmas eve by loving him as Christ, doing so much of what we’ve presented.  That’s the power and grace of God!  This can happen here if we, too, will the good of the other.  (View video from 0:00 to 11:30.)