A few months ago, there were two tragic pieces of news:  1) Someone was selling the Eucharist online.  The screen shot says, “Real Catholic Hosts, consecrated by a priest!!!  9 pieces * * *!!  Made in Germany!  Black Mass Magic Satanism.”   A black mass is a ritual to worship the devil and mock the Catholic Mass.  The seller alleges that he was given the Hosts by a priest involved in the Satanic underground—this isn’t verified but wouldn’t surprise me because the Church in Germany is beyond a mess.  The bishops themselves advocate practices against Church teaching, and a survey found that 54% of priests go to Confession once a year, while only 58% of them report praying every day.  That’s like having a hockey team where the players never skate!

2) In Santiago, Chile, the new archbishop denied Holy Communion to Catholics because, believe it or not, they were kneeling.  Here’s the video.  We can’t read his mind, but this sort of thing has happened before across the world.  The various reasons are that priests want people to keep a common posture of standing, and perhaps are afraid that Catholics kneeling may make them feel superior.  But Church discipline states priests shouldn’t deny Communion to people simply because they’re kneeling (Redemptionis Sacramentum, 91. See also this source).

Fr. Raymond de Souza, an astute Canadian commentator, makes a great observation about this incident: “When the Church becomes accustomed to putting other priorities ahead of the Eucharist, she becomes capable of manifold sins.”  He then quotes Pope Benedict about the connection between the sexual abuse crisis in the Church and the neglecting of the most important spiritual realities like the Eucharist.

Here’s the message from these two incidents: The culture of Catholics, especially towards the Eucharist, will impact everything else, either positively or negatively.  When I was in Germany for 2005 World Youth Day, I had the following experience:  After Mass a woman came up to me annoyed that I was careful about crumbs of the Eucharist on my hand (because Jesus is present in every crumb).  She advised me not to worry about letting them fall to the ground!  So, if Catholics in Germany don’t pray and want to change official Church teaching, and when bishops think kneeling is a problem, then the culture is bad and then we’re going to have a dying church. 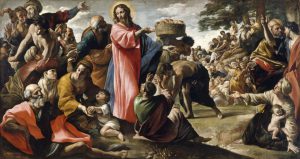 The Miracle of Loaves & Fishes by Giovanni Lanfranco

Today’s Gospel is referred to as the miracle of the ‘multiplication of loaves,’ and shows us a healthy spiritual culture!  For the early Christians, this event, full of details, mirrored their own celebration of Mass.

1)  It says, “When the crowds found out about [Jesus withdrawing to Bethsaida], they followed him; and he welcomed them (Lk 9:11).  Scholars note that the Greek word for ‘welcome’ here is the same used when the people welcomed Jesus (Lk 8:40) and when the early Church welcomed people as described in the Acts of the Apostles, thus pointing to the virtue of hospitality at Mass (Luke Timothy Johnston, Sacra Pagina, Luke, 146).

2)  Jesus “spoke to the crowds about the kingdom of God” (Lk 9:11), then fed them.  For the early Christians, this meant the Mass starting with the Liturgy of the Word and then the Liturgy of the Eucharist (Daniel Mueggenborg, Come Follow Me, Year C, 107).

4) When Jesus says, “Make the people sit down in groups of about fifty each” (Lk 9:14), scholars believe this is a reference to the early Church which would celebrate Mass in their homes, because fifty was about the number they could fit in these homes (Mueggenborg, 110). 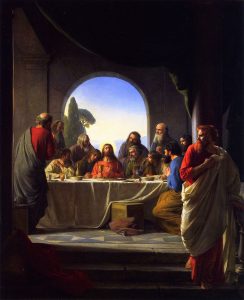 The Last Supper by Carl Bloch

5) It says, “And taking the five loaves and the two fish, he looked up to heaven, and blessed and broke them, and gave them to the disciples to set before the crowd” (Lk 9:16).  All theologians recognize that these four verbs are important, because Jesus uses them at the Last Supper; whenever we see these four verbs we know we’re talking about the Eucharist.  This is also what happens at Mass: the priest takes the bread and wine from the faithful who offer them, then blesses them, breaks the Eucharist, and gives it back to the people.

6) “What was left over was gathered up, twelve baskets of broken pieces” (Lk 9:17).  “Broken pieces” means “fragments,” which is what the early Christians called the crumbs of the Eucharist, towards which they were very careful, unlike my German friend.

“The Mass was the center of life” for the early Church (Scott Hahn, Signs of Life, 37).  Christians would meet every Sunday to celebrate Mass, and I remember hearing that they’d meet before dawn because they had to go to work afterwards; there was no weekend in the Roman world.

In 304, a group of Catholics in Northern Africa were rounded up and tortured due to Emperor Diocletian’s persecution that forbade Catholics from celebrating Mass.  “Interrogated about why he disobeyed the Emperor’s decree, a young lector named Felix said this: ‘As if one could be a Christian without the Mass or the Mass could be celebrated without a Christian! . . .   The Christian exists through the Mass and the Mass in Christians!  Neither can exist without the other. . . .  We celebrated the glorious assembly.  We gathered to read the Scriptures of the Lord at the Mass.’”  Their culture, centered on the Eucharist, was so healthy that the Church grew by 40% per decade (Mike Aquilina, The Mass of the Early Christians, 23).

Here’s a short video of Catholic Eucharistic culture throughout time.

Culture is the habits, norms, beliefs, and underlying assumptions of any group.  How many of you would eat rice for breakfast?  But, in Canada, that’s not part of our culture.  Do you know how people in Italy answer the phone?  They say, “Pronto,” meaning, “Ready.”  Strange, right?

We Catholics have our own culture, too.  How do we start prayers?  With the Sign of the Cross—Protestants don’t do that.  In our archdiocese, do most Catholics talk in church?  That’s not a healthy culture.  Do most Catholics get bored during the homily?  Unfortunately, that’s who we are.

We naturally go along with the culture unless we think and act intentionally.  Are you aware that I, as your priest, actively try to change the culture here?  We’ve seen some amazing changes in culture at St. Anthony’s:  It’s part of our culture here to learn, with over 540 people taking the first level of Faith Studies.  Alpha is part of our culture now.  What’s the term that’s become the focus of our efforts to build our parish centre?  It’s not ‘fundraising.’  It’s ‘sacrificial giving.’  Since we’ve talked about devout conversations for three weeks now, the culture is changing!

Nevertheless, I need your help with two cultural habits:  1) Every year on Corpus Christi Sunday, meaning in Latin the ‘Body of Christ,’ we always remind ourselves to receive the Eucharist with the utmost care, because we’re centered on the Eucharist.  It’s already part of our culture that only Catholics can receive because Communion is a sign that we’re baptized and in union with the Church.  It’s already part of our culture that sometimes we choose not to receive, and it’s no one else’s business why.  It may be because we’re not ready, we haven’t prepared well, we’ve eaten within one hour of Communion, or we’ve committed a mortal sin, let’s say by missing Sunday Mass through our own fault. 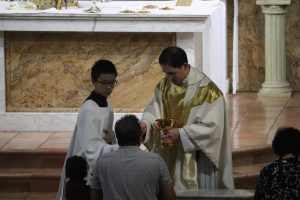 But there’s one area we need to improve: our reception of Communion.  Our hearts need to be better prepared.  We need to remember that we’re receiving Jesus.  We are so blessed!  Jesus loves us so much that He died for us, offers Himself for us, so that we can be reconciled to the Father.  And we express our love for Him externally: by never taking the Eucharist with one hand, by not eating the Eucharist while moving, and by creating a throne for Jesus.

Today, we’re celebrating First Communion.  Parents, the way our kids receive Communion tells us a lot about our culture.  Let’s improve our own example and teach and correct our children well.

As I mention every year, I personally favour receiving Communion on the tongue, not because it’s better, but because it’s a clearer sign that something special is happening.  We don’t take any other food this way, so the fact that we receive the Eucharist differently reminds us this is no ordinary food; and it’s a powerful example for our children.

One thing I’ve noticed among almost all the young Catholics who choose to practice their faith during high school, college, and afterwards is that they all have a sense of the preciousness of the Eucharist—that’s something we want to make sure is a part of our culture. 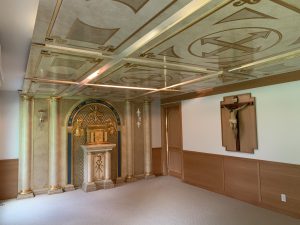 2) We’re opening our new chapel next Sunday, and last week I invited everyone to sign up to commit to 15 minutes of adoration a week.  We’ve been talking about this for six months, going over all the spiritual benefits… and only 24 people signed up.  I know many are thinking: “Fr. Justin, I’m with you on this, I already go every week, so what’s the point in signing up?”  The point is it’s about changing the culture.  It’s one thing to say we love Jesus in the Eucharist; it’s another thing to commit to it and make it public.  Our community only grows when the culture grows.

I, as your shepherd, need to see if we’re able to make it normal to drop by during the week to visit Jesus.  There’s no pressure!  I just need to see who supports making the Eucharist the centre of our culture.

Consequently, I’m asking:  If you support this, then please take two minutes on your phone to go to this website, stanthonyvan.weadorehim.com, and sign up.

We talked about black masses at the beginning, so let’s end with a story about one.  In 2014, some students at Harvard University, with the permission of the president, arranged to have a black mass on campus grounds.  The response of Catholics wasn’t, “I believe, but what can I do?”  Many Catholics had a Eucharistic heart and so they did what was part of their culture:  They called for a Holy Hour of Eucharistic adoration and a procession through the streets.  At the scheduled time of the black mass, so many Catholics gathered at St. Paul’s Church that it overflowed outside.  During the procession, Catholics who happened to be passing by also knelt down, while others joined in singing. 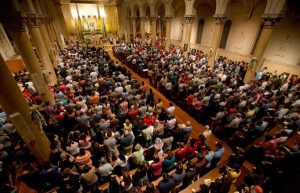 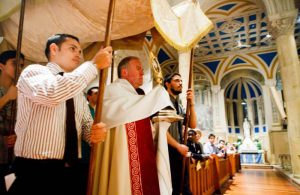 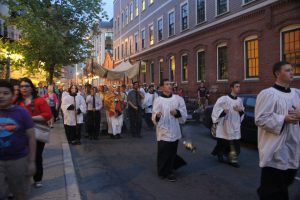 Because of this, at the last moment, the organizers of the black mass cancelled their sacrilegious event.

This attack on Jesus was overcome by the powerful Eucharistic culture of a few Catholics.