Three questions:  1) Is there anyone in our family from whom we’re now distant because of some problem?  2) Is there any friend on whom we’ve given up, because they hurt or offended us?  3) How often do we switch churches, depending on what suits us?

Brothers, sisters, guests, we’re talking today about the temptation to isolate ourselves from other people.  In essence, when we distance ourselves from someone in our family, for a bad reason, we miss out on intimacy.  Hurts in relationships are supposed to help us grow, but, when we don’t forgive our friends, we don’t grow.  And if we switch churches depending on whatever’s convenient, or on the priest we like, or because there was a misunderstanding with someone, then we never plant spiritual roots, and don’t… grow.

Today is the solemnity of the Most Holy Trinity, and the human person is designed to imitate the persons of the Blessed Trinity in their relationships with each other, meaning we’re meant for stable, intimate relationships.

1) He “will speak whatever he hears” means, according to St. John Chrysostom, that Jesus and the Holy Spirit have the same knowledge (Ancient Christian Commentary on Scripture, John, 11-21, 207).

3) “All that the Father has is mine” refers to this incredible intimacy between the Father, Jesus, and the Holy Spirit.

Let’s explain this intimacy.  Christians believe God is one but there are three persons in God.  We use two key words to understand this:  ‘person’ and ‘nature.’

‘What’ refers to the nature of a thing, ‘who’ to the person.  Each of us has one nature and each of us is one person; we all have human nature but have a different allotment of it.  However, in God, there are three persons who possess the exact same nature:  Father, Son, and Holy Spirit have one mind; they think with the exact same mind—that concept blew me away when I first learned it.  And they love with the same will (Frank J. Sheed, Theology for Beginners, 30).  We’re meant for this kind of intimacy because God made us in His image (Gaudium et spes, 24).

If we’re isolating ourselves, there’s a rule that will help us—what I hope we all remember today.  It’s called the law of the gift: “Man… cannot fully find himself except through a sincere gift of himself” (Gaudium et spes, 24).  The more we give, the more we become truly human and happy.  But if we walk away from relationships because of hurt, we lose ourselves. 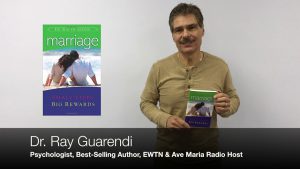 There’s a funny image I heard describing marriages:  During the first year of marriage, each time a couple shares marital intimacy, they put a marble in a jar.  After the first year of marriage, for each act of marital intimacy, they take a marble out.  That jar will never be empty (Dr. Ray Guarendi, Marriage: Small Steps, Big Rewards, 109).  The point is that family relationships wear down and we stop giving of ourselves.  Now, remember, I’m not talking about abusive and dangerous relationships where it’s the right thing to separate ourselves.  I’m talking about the daily hurts that wear us down.

We’re in the season of Breaking the Silence where we’re focusing on devout conversations:  We ask questions of substance so that people can share what God’s doing in their lives.  (See: “Dealing with Shame,”  “Want to Help People You Love Grow?  Here are 4 Ways, ” “5 Types of Questions That Help Us Pay Attention to God,” and “Stories Strengthen Souls.“)  But someone reminded me that an essential part of this is affirmation:  When people share with us, we need to affirm them in their courage and vulnerability.

So, if there’s a family relationship that’s struggling, could we consider making a gift of self through affirmation?  What about saying “Sorry,” listening, forgiving, being polite, giving a hug, patting someone on the shoulder?  That’s what Jesus does for us:  We keep on hurting Him, but He keeps on giving Himself to us.  When we talk about loving like Jesus, in our vision, we mean following the law of the gift.

There are two distinct moments in my life when I thought about ending some close friendships.  One time I was with friends from high school, and they all kept a truth from me; it was supposed to be a joke but wasn’t funny.  So I walked out.  But one of my friends, not a Christian, made a gift of self and called me, listened, and apologized.  And then I made a gift of self in return and accepted his apology.  If either of us were more selfish and unreasonable, our friendship could have ended, but it’s persisted for 21 years, praise God.  Another time, some friends were making fun of me, in a joking but not-so-joking way, and I was hurt.  Later, while I was praying, I made a difficult choice to forgive and love them, because I was overreacting.  The gift of self saved me from acting irrationally. 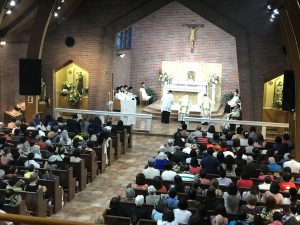 When it comes to which parishes we attend, the logical thing to do is to go where we’re nourished and where we can nourish others.  But there’s a temptation to go where it’s merely convenient for our schedule, or if we like what the priest says, or like the people there.  (We’re not talking about choosing a Mass time because of an unusual schedule—that makes sense.)  However, if we keep on parish hopping, we’ll never plant spiritual roots.  Having a spiritual family is a key component of spiritual growth.  It’s a virtue to take responsibility for our brothers and sisters rather than just come and go.  We hold each other accountable.  In a parish family, we get tested and grow, because it’s hard to love each other sometimes (Rick Warren, The Purpose Driven Life, 133-136).  There’s no such thing as a perfect church.  If you find one, go join it; it won’t be perfect anymore.  Have you ever heard someone say, “I go to different churches because that’s how I love my brothers and sisters; that’s how I grow spiritually”?  It doesn’t happen.

This is why Deacon Andrew and I insist that, if you want to have your child baptized here or if you want to get married here, you need to put down spiritual roots here, because it’s good for you!  And show us that you’re committed by going to Mass every Sunday, by greeting us every Sunday, or by using envelopes, because those are the only fair ways to know.  Think about where we are nourished and where we can nourish other people, and then make roots there.

In the 1800s, there was a simple Franciscan brother named Francesco whose job was to beg for food for the brothers, and also give what he acquired to the poor.  He was so holy that his superior was jealous of him.  One day, the superior said, “You know, Francesco, you are not the only saint in Genoa.  There are other saints who are not so much in the public eye.  You stay home for a while, and I will send others out to do the begging.”  Francesco was crushed and confused, and went back to the chapel.  But never held a grudge.  He forgave his superior.  The superior wasn’t an evil man, but was a jerk, and went to confession about his sins. 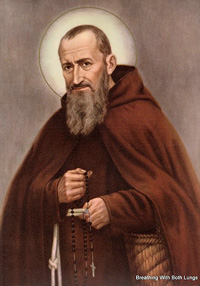 Some months later, cholera broke out in the city and hundreds died every day, but the superior still wouldn’t let Francesco go out and help.  One night, however, they ran into each other and Francesco said, “Padre, may I ask a permission…” “What is it now, Francesco?”  “May I have your permission to offer my poor life as a prayer to the Lord so that the cholera will stop?”  The superior was so annoyed that he said, “I don’t care what you do” (Fr. Benedict Groeschel, Stumbling Blocks or Stepping Stones, 76-79).  So Francesco offered his life to God, and the very next day started dying of cholera himself.  He died three days later and “the number of cholera victims started to diminish at the same time.”  God had received his sacrifice.

We don’t know all the details of the story, whether or not he tried to explain himself or not, and clear up the confusion.  The point is: He never gave in to bitterness and kept on loving someone with whom he lived.  He kept on giving of himself, and was so much like Jesus that he gave himself completely for other people.  And now he’s a saint: St. Francesco Maria da Camporosso.

Where did he get his strength and love?  The Eucharist.  He sometimes spent entire nights on his knees in the chapel before the Blessed Sacrament. 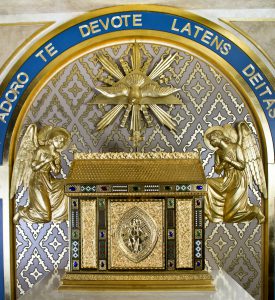 We’re two weeks away from our chapel’s grand opening, and, after six months of preparation, we’re ready to sign up.  Again, what we’re inviting everyone to do is to spend 15 minutes a week with Jesus, anytime you want, at any chapel you want.  The goal is to strengthen our relationship with Him through a weekly commitment.  The website is stanthonyvan.weadorehim.com.  It’s not a perfect website, but allows us to see how many of us are signing up, and it’ll send us reminders of our commitment to pray.  It does ask for a time slot (and time slots are helpful) but we’re not bound to it.

The new chapel hours will be every single day, no longer Tuesday to Friday, and we’ll start off from 6:00 a.m. to midnight.  Eventually, once all the safety issues have been addressed and tested, we’ll move to 24 hours a day.

St. Faustina said that whenever we’re united to Jesus in the Eucharist, we’re united to the Father and the Holy Spirit (Vinny Flynn, 7 Secrets of the Eucharist, 33).  And when we talk to the persons of the Trinity, we’ll remember that we shouldn’t isolate ourselves; we’ll remember the law of the gift (which is life-giving when annoyed, frustrated, or hurt):  We only find ourselves through the gift of ourselves.