Fr. Mike Schmitz tells a story he heard about a village in Africa.  In the midst of war, enemies of the village would capture women of all ages, sexually assault and rape them, and then send them back to the village shamed.  Imagine how these women felt.

I remember when I heard that one third of women have been sexually abused,  “Is it that high?” I thought.  Yes, according to Ontario government statistics. One of the reasons given why people don’t report sexual abuse is feeling ashamed or embarrassed. 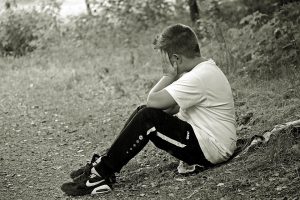 We’ve all experienced shame.  When I was in elementary school, kids made fun of me because of our old family car; they called me “fat boy” because I was overweight—that really hurt.  When my dad didn’t have a job for ten years, he felt shame as a man.  What else causes shame?  Maybe the way we look, our clothes, family, an addiction, or a failure.

Fr. Pierre and I have been talking for a while about how many people suffer from shame, and we want them to be free!

The apostles in the Gospel we just heard, had great guilt, but perhaps also shame.  It’s Easter Sunday evening, and they had just denied Jesus two days ago.  They were the leaders, but were now failures.  St. Peter promised to be faithful (Lk 22;33), but was a coward.

One Scripture scholar points out how the apostles gathered in darkness signifies “the absence of Christ the light and their own hopelessness.” (Francis Martin and William M. Wright IV, The Gospel of John in Catholic Commentary on Sacred Scripture, 340.  Cf. Jn 20:1,19).  Light and darkness are very important in St. John’s Gospel.  Nicodemus visits Jesus by night because he’s afraid (Jn 3:2); Jesus says, “As long as I am in the world, I am the light of the world” (Jn 9:5); and when Judas leaves the Last Supper to betray Jesus, it says, “And it was night” (Jn 13:30). 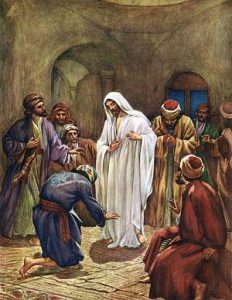 “Jesus Appears to the Disciples” by William Hole

And so, when Jesus appears to them in that Easter Sunday darkness, He doesn’t say, “Shame on you.”  He says two times, “Peace be with you” (Jn 20:19,21,26).  Theologians all recognize how Jesus doesn’t shame them for their failures, but immediately loves them and doesn’t speak of the past (Daniel Mueggenborg, Come Follow Me, Liturgical Year C, 67.  See also John Bergsma, Divine Mercy Sunday!).

Peace is the translation of the Hebrew word shalom, meaning “(peace, well-being, everything is right), a blessing of reconciliation with God”(Martin & Wright, 252).

Peace is what Jesus wants to give us today!  He wants to take away our shame.  There are three parts to this:

1) The first is encountering Jesus.  He wants to meet us, because guilt and shame always make us hide from Jesus.

Guilt is feeling badly about what we’ve done.  It’s good when we feel sorrowful about our sins. But it’s bad when it’s disproportionate, when we think God can’t forgive or doesn’t love us.

Same with shame.  Shame is feeling badly about who we are.  It’s good when it protects us.  That’s why people wear clothes, so that others don’t treat us like objects (Christopher West, Theology of the Body Explained, 149-151).  It’s sometimes good when we feel shame that we’re not living up to our potential.  However, it’s bad when we feel worthless or unlovable, call ourselves names, want to hurt ourselves, loathe ourselves and lose hope, when we feel badly about something for which we weren’t responsible, such as being sexually abused.  All these things lead us to hide ourselves from God!  That’s when Jesus passes through our doors and says, “Peace be with you!”

One thing He wants to tell us, if we’re survivors of sexual abuse, is that it’s not our fault.  Blaming ourselves for sexual abuse is one of the great lies of the devil.

Another thing He tells us is that there’s no sin that He can’t forgive.  All sexual sins and sins of abortion can be healed.

2) The second gift Jesus gives us is the courage to talk about it.

A month before I was ordained a priest, I made a general confession, meaning confessing all of my sins, even ones previously confessed. It was supposed to be an act of humility, trust, and purification.  But I got to a part when I was really embarrassed: I started to confess it, then stuttered.  So, Msgr. O’Brien said with a smile, “Well, Justin, I can see this is hard for you.  I was taught by a wise Christian brother that you should ‘Name it and shame it.’”  That is one of the best pieces of advice ever!

When we’ve done something shameful or something shameful has happened to us, we keep it a secret because we’re afraid that people won’t love us anymore.  So the shame has power over us.  But once we bring it out into the open, we have power over it!  Name it and shame it!  That’s the power of the Resurrection that we discussed last week.  Now’s the time for Easter power and some Easter healing!

How?  We tell it to people who are spiritually mature and trustworthy.  The first people we should trust is our parents.  This requires that we, parents, need to be more mature than ever: We need to be loving and have self-control.  When our children do something bad or are involved in something bad, we ourselves experience all sorts of emotions: fear, anger, confusion, or shame.  However, our primary response must be unconditional love.

The only three times we need to delve more deeply into a problem is: 1) when our children aren’t repentant—then we need to help them realize the sin and be sorrowful; 2) when we need to help our children heal by asking questions for their sake; and 3)  when, as we discussed three weeks ago, we have to judge rightly and tell people their sins so that they can grow. 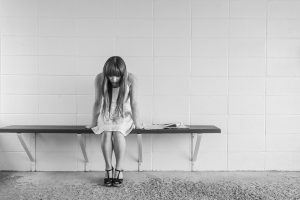 Last July I told you about a young lady who did something very embarrassing:  She went to a party, dressed very immodestly, got drunk, and posted pictures of herself on social media. When her friends in the youth group found out, they were shocked and she was embarrassed.  When I found out, as a spiritual father, I called her and said, “I found out what happened.  Look, we all make mistakes.  Don’t worry, I don’t think less of you, because I’ve done stupid things.  I know you’re an incredible person, so my opinion of you hasn’t changed.  Just go to Confession and put it in the past.”  Remember what she said?  “Fr. Justin, you’ve made my month.”  This is the kind of culture we’re trying to create here, a concrete way of loving like Jesus.

Today’s the feast of Divine Mercy.  We need to be a parish of mercy.  I’m asking if you will all be disciples of Jesus who will be mature, and treat people with mercy.  And it starts with little things.  Never expose someone unnecessarily who’s in a position of weakness. 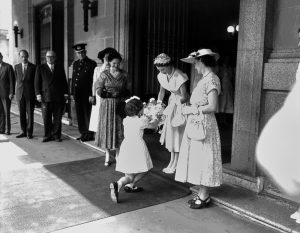 My mom told me something years ago: When Margaret Trudeau met Queen Elizabeth and curtsied, she stumbled, but the Queen tightened her grip on Margaret’s hand and graciously pulled her up to a normal stance.  Another example, and this may seem funny, but it’s true: When someone’s zipper is undone, you don’t make fun of that person.  You cover for that person.  In other words, don’t dwell on another person’s embarrassing forgetfulness.  We need to forget it the way God does—that’s His mercy.  And, if we don’t suffer from unhealthy shame, please pray for those who do.

We’re starting a number of homilies in a season called, “Break the Silence.”  This season is primarily about evangelization and sharing our faith, but I’ve realized that God wants us first to break the silence in our own lives, so that we can proclaim His mercy.  The devil wants us to keep our shame hidden.  So, we can take our sins and hurts to the confessional and break the silence there. 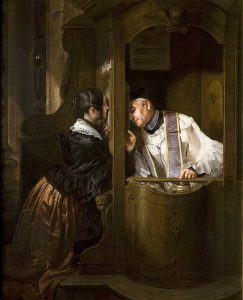 “The Confession” by Giuseppe Molteni

Next week, Fr. Pierre and I will have all-day Confessions.  I’ll be in and out because of the New Evangelization Summit, but Father will be there all day.  We could go to him and say, for example, “Father, I’ve been carrying a lot of shame.  I feel like I’m a failure and I need to be reminded that I’m not.”  Or, as an old friend suggested, you could go in and sing, “Father I have sinned.  Help me find my way.”  And then Father or I will sing back, “I forgive you, I love you.”  By the way, feel free to ask us to lift the screen, so that you can have a conversation.

But please remember that we’re not professional counsellors.  We can’t take too long because other people are often waiting in line.  We can help with your relationship with God, your spiritual life, your moral life, and questions about life, but we’re not experts in psychology or trauma.  I really encourage all of us to see counsellors when we need it.  Instead of going to counsellors, Catholics often go to priests because they trust us more, because there’s no shame involved, and because we’re cheaper!  In the bulletin, we’ve put an insert of Catholic counsellors who fully embrace the Church’s teaching on the human person.

3) The third grace is to renounce, command, and claim.  In our spiritual life, we need to name the sin, the temptation or the shame, and renounce it.  In prayer, for instance, we say, “In the name of Jesus, I renounce the shame of abuse.”  Jesus sometimes tried to know the name of a demon in the Gospels (Mk 5:9; Lk 8:30), so that He could have power over them and cast them out.  Fr. Pierre’s very familiar with this kind of prayer.  He will use Christ’s priesthood and command demons to leave you, which is healing a lot of people.  And once we renounce a temptation, then we claim the freedom of the risen Christ; we need to claim it consciously.

Two final stories:  When Fr. Mike Schmitz talked about that African village where women are assaulted and then returned in shame, the village counteracts that with love.  They receive the women back with joy and acceptance.  The women still have to deal with their trauma, but there will be no shame in the community.  They are wanted and loved, and not looked at differently. 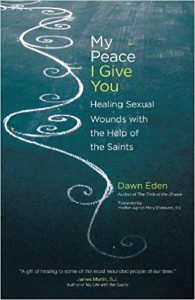 Finally, Dawn Eden wrote this book, My Peace I Give You, about healing sexual wounds with the help of the saints.  She was raised Jewish, sexually abused when five years old, but found healing through Jesus.  She became Catholic when 31, and one dramatic gift was that her temptations to despair and self-harm vanished.

One prayer that helped her was the Anima Christi, meaning Soul of Christ, which we’ll sing later today. The prayer begins by asking that Christ be in us, then changes that we be in Him.  Where?  In His wounds.  Dawn said this prayer got her out of the prison and solitude of herself and thinking about Jesus’ wounds, and those wounds are gloried! 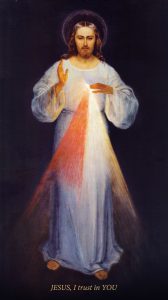 This is the painting of His wounds that she contemplated, called the painting of Divine Mercy.  She says, “Over time, as that image of the loving and merciful light… deepened its hold on my consciousness, I began to re-examine the times… when I had doubted God’s mercy.  That… led to a conversation with God that I had been putting off for a long time—asking how I could embody his mercy toward those I found hardest to forgive” (My Peace I Give You: Healing Sexual Wounds with the Help of the Saints, xxi-xxii).

That’s where we’re going to leave it, with a loving and hopeful challenge to try. Dawn says that one life-altering piece of advice she received was that “God calls us only to try” (56).

Jesus comes to meet us!  And now we’re invited to try and let Him take away our shame.