Two stories:  First, aboard the papal plane in 2013, Pope Francis said, in reference to the gay lobby in the Vatican, “You must distinguish between the fact of a person being gay and the fact of someone forming a lobby, because not all lobbies are good.  This one is not good.  If someone is gay and is searching for the Lord and has good will, then who am I to judge him?”  These words are now the signature phrase of his pontificate, and they’ve touched many people, because, deep down, we’re all afraid of being condemned and not being loved. 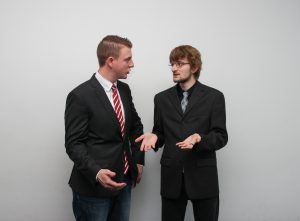 Second, John, a friend of mine, once told me that another friend, Bill, asked him to go for a walk. They had a good conversation, and then Bill, out of love, said, “John, no one takes you seriously.”  (Brothers and sisters, dear guests, how would we feel if a friend told us this?)  John was the most fun of this group of friends, as well as talented, athletic, intelligent, but very often he was full of himself, all talk, and wasn’t serious—deep down, he knew it.  That’s why he had a kind of self-hatred.  He knew he wasn’t who he should be.  What Bill did was help him face what he already knew about himself.  Consequently, John wasn’t angry with Bill, because the criticism was done out of love, and it helped him. 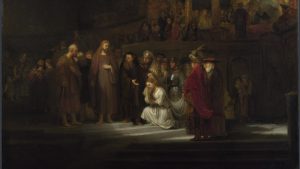 The Woman taken in Adultery by Rembrandt

However, in our culture, we tend to do one or the other:  We either love people and never help them face their sins, or we tell people their sins without loving them. Jesus, in today’s Gospel, balances these two approaches perfectly.  A woman has been caught in the act of adultery, and the Mosaic law (named after Moses), commands her to be stoned to death.  Jesus manages to save her life, and, when her accusers leave, asks her, “‘Woman, where are they?  Has no one condemned you?’  She said, ‘No one, sir.’  And Jesus said, ‘Neither do I condemn you.  Go your way, and from now on do not sin again’” (Jn 8:10-11). Jesus loves her, but also acknowledges that she’s committed a grave sin, and tells her to stop.  He says to all of us, “I do not condemn you.  I love you.  But do not sin again, because you already know what you’re doing is wrong.”

So, telling people their sins isn’t always wrong.  Our society says, “Don’t judge,” but hasn’t clearly defined what they mean, because some judgments are right and exactly what we need.

Jesus says in St. Matthew’s Gospel, “Judge not, that you be not judged.  For with the judgment you pronounce you will be judged… Why do you see the speck that is in your brother’s eye, but do not notice the log that is in your own eye? …  You hypocrite, first take the log out of your own eye, and then you will see clearly to take the speck out of your brother’s eye” (7:1-3,5). Jesus is not saying never to correct people, because, at the end, He says we’re supposed to correct ourselves before correcting others.  And in order to help people see the truth about themselves, we need to see the truth about ourselves.  What we’re supposed to avoid is condemning people or judging their hearts, because we don’t know their hearts, unless they tell us or we have evidence.  In addition, we’re supposed to be merciful and fair in our judgments, if we want to receive a merciful and fair judgment (Curtis Mitch & Edward Sri, The Gospel of Matthew, in Catholic Commentary on Sacred Scripture, 114-115).

In order to emphasize the point, Jesus later says, “If your brother or sister sins against you, do not judge them” (Mt 18:15).  Just kidding, it says, “If your brother or sister sins against you, go and point out the fault when the two of you are alone.”  So, Jesus commands us to point out each other’s faults.  “But if the person does not listen, take one or two others along with you, so that every word may be confirmed by the evidence of two or three witnesses.”  Again, He wants us to correct each other’s faults and sins, out of love and with love, because this honours each other’s call to greatness, to holiness.

St. Leo the Great says, “Christian, recognize your dignity and, now that you share in God’s own nature, do not return to your former base condition by sinning…  Never forget that you have been rescued from the power of darkness and brought into the light of the Kingdom of God” (CCC 1691). 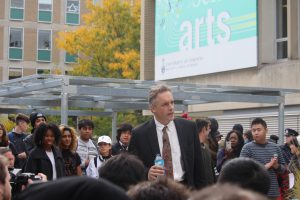 Jordan Peterson at a rally.      Photo by Quist

Jordan Peterson is so popular among millennials because he challenges them to live in accord with their dignity.  He shows them the men and women they can be beyond adolescence.  He says, in a very clinical, non-angry way, “If you’re just a useless adolescent, then you’ve forgotten who you are.  And the consequence of that is that… you’re not going to be good for anything, and no one’s going to be able to rely on you, and you’re going to be all whiny and resentful.”  He’s firm but caring!  He speaks in a blunt way, often with hyperbole, to make his point.  Remember that Jesus did the same thing, telling us to hate our family (Lk 14:26), in other words, to love God more than our family; He tells us to cut off our hand if it causes us to sin (Mt 5:30), meaning that sin is deadly and we should avoid it all costs; and He calls the Pharisees, “hypocrites” (Mt 23:27).

There were some great millennials to whom I used to minister.  These individuals knew they could be flaky, meaning they would avoid commitment, they’d think too much of themselves, and would often live superficially—it’s a fun life, but they didn’t have self-respect, and none of their peers looked up to them; they were floating through life.  My duty was to help them recognize their call to holiness, to be saints!  So I would give them feedback, encouragement, and criticism.  Sometimes it was done rightly, sometimes wrongly.  May God and they forgive me for my sins in this regard; and I did improve.  However, they all wanted to hear my comments, because they wanted to grow!  And to see them years later mature and be men and women of holiness and virtue means the pain of hearing our sins was worth it.  Nevertheless, believe it or not, they’re still happy to see me, because I loved them, I corrected them out of love, and they knew that. 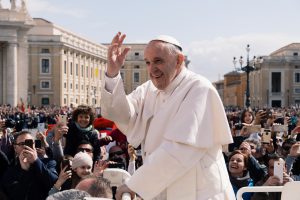 So here are three ways to become the saints we’re meant to become.  First, be careful of misunderstanding the phrase, “Who am I to judge?”  I believe I know what the Holy Father was getting at, but so many Catholics have told me they don’t, and, to prove their point, it’s true that this phrase has been so badly misunderstood in Western culture to mean no one has to change morally.  So, there has been tremendous fallout from this phrase.  Every time someone says, “That’s wrong,” people respond, “Hey, the pope says, ‘Who am I to judge?’”  This doesn’t help us morally grow. Some judgements are right.  If we believe racism, slavery, and bullying are wrong, we’re judging, which is right.  The phrase, “Who am I to judge?” might appear to make the Church seem more loving, but, as Michael Dopp once said:  There’s no statistical evidence to show that more people are coming to Christ since the Holy Father said this.

Avoid the mentality of complacency and mediocrity.  Embrace the culture of greatness and holiness.  I hope our parish becomes a community where there’s much love and much challenge, where there’s a hunger to grow,  and expectation to be challenged by the homily and by other people!

Second, desire to know your sins and faults.  How much do you want to be corrected?  Furthermore, when corrected, how do we respond?  That will indicate our level of growth.

“Most people don’t want to know… their weaknesses.  This is the classic sign of mediocrity” (Matthew Kelly, The Rhythm of Life, 237).  Our strengths are already bearing fruit!  Knowing our weaknesses and faults is the key to growth.  The best athletes always want to know their faults.

Ask God to reveal your faults.  If you think God doesn’t hear prayers, ask Him that one, and see what comes.  And when we see our faults or someone tells us them, then rejoice!  Yes!  We can even say, as Scott Hahn, says, “It hurt so good!”

When John told me how Bill said to him, “No one takes you seriously,” John felt free!  He was finally free of the temptation to try to impress people.  He could accept that he had faults, and actually start working on them!

Now, no one’s perfect, so the feedback people give us will never be 100% perfect.  But, if we are people who seek the truth, then we’ll be able to see better when someone correcting us is 0% correct, 50% or 99%.

One time, a man at the archdiocesan head office wrote me saying that my delay in responding to his e-mails was unacceptable.  He was right on.  I had to do better.  Another time, a guy at the seminary said, “You know, you’re so arrogant.”  I think he was 50% right; he had his own problems, and called to apologize, but he had a point.  Another time, someone criticized me for not mentioning the Cross in my homily, because he said the Cross should always be mentioned.  But that’s not true, because the most important mystery of our faith is the Trinity, and the saints didn’t mention the Trinity in every homily. 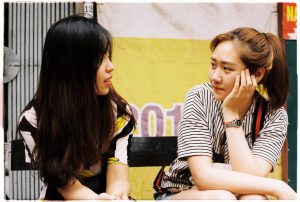 Third, lovingly tell people their faults.  Jesus said, “Do not judge by appearances, but judge with right judgment” (Jn 12:24).  Go to Confession first, so that our hearts are pure.  The reality is that we all sin all the time, so, if we don’t go to Confession, let’s say once a month, then most of the time, our perspective will be skewed.  We need to go to Confession more if we’re going to help people grow.  Love the person first; in our minds, give that person a big joyful hug or smile at them, so we have no unjust anger towards them.  And don’t do it all the time, because that’s overwhelming.  We don’t want to become negative people who only see faults and problems; rarely do they affirm, rarely do they see the good; they always see the bad.

And judge only according to evidence.  Swearing, for instance, is wrong; therefore, we can say so.  But we don’t always know why people do it:  Yes, it could be that they don’t care, but it could also be that they don’t think about it.  So we don’t comment on their motives unless there is evidence.

And when we’re not sure, assume the best.  If our co-worker messes up, maybe we weren’t clear, maybe they forgot, maybe they had a bad day.  “Just say to yourself:  ‘I’m sure there’s a good explanation’.”   Go talk to them about it, saying, “Hey, you were late.  I’m sure there’s a perfectly good explanation.  What happened?” rather than, “What part of being here at 6 p.m. didn’t you understand?”