Let me explain more deeply why, as a parish family, we’ve just started a season called The Sabbath Summer, where we rest in God and celebrate the most important things.  Not only do we need to rest, but, after being here for five years as your priest, I see many of us, including me, continuing to have the same problems.  Many of us have had massive spiritual growth in our lives, praise God, but we also still keep repeating the same mistakes in our spiritual lives, our relationships, at work, with regard to our mental and physical health.

One reason why things aren’t getting better is because we’re so busy that we have no time to be healed.  We need to slow down, and ask Jesus how He wants to heal us. 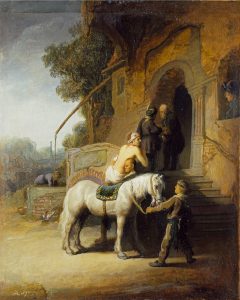 The Gospel today is called the parable of the Good Samaritan—the literal meaning is that anyone who is in need is our neighbour.  But there’s a deeper meaning, one seen by the Church Fathers.  According to this interpretation, the Good Samaritan is not we, but Jesus!  And the wounded man lying by the roadside is all of humanity.  Pope Benedict asks, “Is it not true that man… has been alienated, battered, and misused through his entire history?” (Jesus of Nazareth, Vol. 1, 201).  Medieval theologians said that the two descriptions of the wounded man in the parable apply to humanity: 1) It says he was “stripped” (Lk 10:30); for us that means we’ve lost supernatural grace; 2) He was “half dead”(Lk 10:30), meaning we’re wounded in our human nature.  So, we’re separated from God the Father and we’re broken in our humanity.

We go down the road from Jerusalem to Jericho (Lk 10:30), about a nine-hour journey, which winds through mountains, and is dangerous and perfect for ambushes—an ideal symbol for the journey of life.  The priest and the Levite passing by (Lk 10:31-32) represent cultures and religion, which alone can’t help us.  Our situation is similar, because we often seek help apart from Jesus.  Then comes the Samaritan (Lk 10:33), Jesus, Who can and will help us.  We should remember that the Samaritans were considered not fully Jewish, so the Jewish people rejected them and wouldn’t even talk to them (Scott Hahn, Catholic Bible Dictionary, 807)—that’s how humanity often sees God, as someone foreign, to Whom we’re not interested in talking.

However, He still comes to heal us—God loves us that much.  The pouring of oil and wine (Lk 10:34) symbolizes the healing power of the sacraments; the animal on which the Samaritan puts the wounded man (Lk 10:34) represents  Fr. Justin, who has to carry 1,000 people and is driven like a beast (just kidding); the inn (Lk 10:34) represents the Church, where Jesus arranges for our care and offers to pay whatever is needed when He returns. 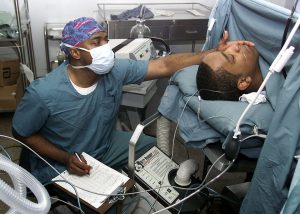 And there’s a great spiritual truth hidden here: Doctors can often do the best healing when their patients are asleep.  St. Thérèse realized this back in 1895: “In order to perform operations, doctors put their patients to sleep” (The Story of a Soul, Chapter 8).  The man in the parable who was half-dead had to rest in order to be healed.  The Samaritan spent the night with him at the inn and then, the next morning, gave two denarii, worth two-days wages, so presumably the man had to rest there a few more days.  Now, could you imagine if the man had said, “No, I’m good.  I’ve got to get back to work.  I’ve got e-mails to answer.  By the way, could you pass me my phone?  I’ve got to check my messages.”  That’s what many of us do all-year round: We’re half-dead, yet we still keep on going as if we’re fine, because there’s so much to do.

Healing takes humility and cooperation.  It takes humility to admit that we’re broken, and then actually do something about it.  It takes cooperation to allow the doctor to heal us.  So, let’s all collectively humble ourselves right now: We’ve all got problems.  And we pray, “Jesus, what do You want to heal in our lives?  How do You want to do it?”

The divine doctor wants us to rest this summer.  Many of us could have huge benefits by going to see a doctor once, or if we went to a counsellor just three times.  All of us will benefit from resting every week, where?  The chapel.  Take a restful vacation, find a retreat, make a good confession.  If we carve out time for rest and healing, we’ll reach the goal of having the best summer ever.

Now, we have a gift for this summer.  It’s called FORMED.  Here’s an introductory video:

We’re offering FORMED because we won’t be offering much formation during the summer.  We’ve subscribed to it for two months and you can access it for free through our parish website or just take the cards in your pews.  For example, we could listen to: 15 Things to Do in the Midst of Suffering, Anger and Forgiveness, Be a Man, Calming Emotional Storms, etc. 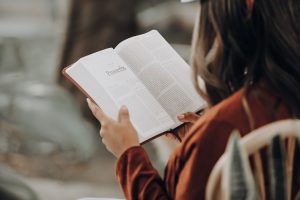 And here’s my adoration tip for the week: Use the right resources.  The books we have in the chapel, which are only to be used there, are absolute gems!  If we struggle to pray, take a book and let it guide you, because the Holy Spirit speaks through good books.

This past May, I had a retreat that changed my life—something I don’t say lightly.  While praying on the plane to South Dakota, I realized that I was cheating God: Whenever I go on retreat, He has my undivided attention.  When I come back here, I give Him time in prayer, but I’m always thinking about all of you and my ministry.  I told this to Trudy, my spiritual director, and said that I fear I’m going to repeat the same mistake as the previous three years.  She said that I’ve mentioned this before so we decided to focus on it.

This is the problem: I know I should be giving God more undivided attention in prayer and should be sleeping more because it’s a reasonable thing to do.  However, I keep on making the same mistakes and have been doing so for basically my whole adult life.  And I’m doing it because of the way I think: I have so many ideas in my head that say I’ve got to work harder, some of which are good, some of which are distorted.

For example, ever since I was 16, I felt as if I had to take care of people.  I remember being at our youth group at St. Paul’s Parish and I had to say “Goodbye” to every single person before I left.  Once I knew everyone was okay, I could rest—that’s a good desire, but impossible to fulfill with 1068 people.

Nevertheless, there were some distortions in my head.  I don’t want to be a worldly, lazy priest, so I reject whatever seems to be indulgence, including sleep.  I actually feel guilty if I sleep more than six hours, because I should be living a life of sacrifice, and that’s what Jesus did.  I can’t stand compromise so I go to the opposite extreme.  But the spiritual truth is that our sacrifices must be in line with God’s will.  Not every sacrifice is one God wants, so a mature Christian must discern God’s will, which is always rightly ordered. 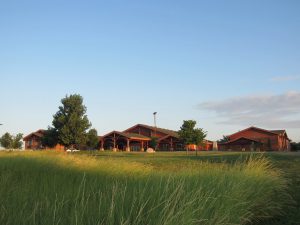 So, while on retreat, I would spend at least four hours in silent prayer, in one hour periods, and write down all the lies and distortions in my mind, and then I’d bring them to Trudy.  We’d pray together: She’d start with what’s called a ‘covering prayer’ which is a prayer of protection, then I would repeat three times that I renounce a lie, and each time, she would ask to cast the lie into Jesus’ holy wounds.  And then we’d pause and talk about what Jesus was saying to me.  And, after going through each lie, I finally felt free!

Now here’s the deal: This would never have worked had I not been on retreat, because I’m too busy to deal with all of the lies.  Even if I have time to deal with five of them, there are 29 other lies that will keep me repeating the same behaviour.  I needed time to rest and let the doctor heal me.  The spiritual surgery took six full days.

And now I spend more time with God than before, because that’s what I need—I’ve put it into my schedule.  I fall asleep faster, I’m more in love with God, and more desirous to give Him my whole life.  I always used to worry about not giving you as much time, but the truth sets us free.  The truth is, if I do God’s will, there are four advantages: 1) Now, when I spend time with you, I’ll try to give you more love; 2) I said to Jesus, “Lord, if I can’t give them as much time, You have to take better care of them than I ever could”; 3) Now, when I go to prayer, I pray for you more intensely; 4) Because I won’t give you as much time, you are all called to grow in greater maturity, taking greater responsibility for your own spiritual health and growth.

Going away every six months for these seven-day silent retreats is worth all the time and money.  I hope you give Jesus the same time and resources to heal you.  Jesus heals best when we rest.