Before we get to the homily proper, I’d just like to address the current COVID-19 crisis.  God is in control of this whole situation.  He always brings good out of evil, and is speaking to us and the world.  We need to listen and not just manage this.  I see this as an opportunity to grow in faith, reset priorities, love like Jesus, ask questions and offer truth, and help our city.

There’s fear in some, but it shouldn’t dominate our lives.  We want to address it without letting it take over.  Take due diligence in terms of precautions, set your heart on God’s goals.  Please act according to reason and faith, not fear.

For our parish, we’re cancelling non-essentials like the Shroud Exhibit and Liturgy of the Word for Children, but the essentials continue.  The church will be open during the day in case people don’t want to pray in the small confines of the chapel, we’ve added more Sunday Mass times to lower the density of people at Mass, and I’ll make an announcement about Communion during Communion time.

God is first in our lives, the author of all things, even in midst of crisis.

Today, let’s see if we can pull together as a parish family and start arriving on time for Mass and staying until the end.  I know how hard it is to be on time.  I was trained by my family to be late: We’d wake up late, rush to get ready, fly out the door, my dad would drive with skill, and then, I’d still be late and apologize.  This has been such a lifelong fault of mine that for the past year or two I’ve confessed whenever I’m even a minute late for Mass or hearing Confessions.  But something beautiful happened to my family in 2005.  The night before I was ordained a deacon, I said to my family, “Can we please be on time for my ordination?  You only get ordained a deacon once.”  And we did!  I arrived an hour early and they were 45 minutes early.  The reality is: We’re always on time for things that are important: an interview, exam, or an important appointment.

As I’ve said before, the Church teaches that the Mass is a wedding banquet.  When we look at today’s Gospel of the Samaritan Woman, we see, from four ideas, how God wants to marry us.

1) The Well.  The text says, “Jesus came to a Samaritan city called Sychar, near the plot of ground that Jacob had given to his son Joseph.  Jacob’s well was there, and Jesus, tired out by His journey, was sitting by the well.  It was about noon.  A Samaritan woman came to draw water, and Jesus said to her, ‘Give me a drink’” (Jn 4:5-7).  Dr. Brant Pitre points out that wells in the Bible are where men meet their future wives.  When I heard this, I immediately thought of Moses meeting Zipporah at a well (Ex 2:15-21), but I didn’t know that Isaac’s relationship with Rebekah started at a well, and Jacob met Rachel at a well, too.  Young Jewish men didn’t go to bars looking for future brides, but to the local well (Brant Pitre, Jesus the Bridegroom, p. 59).

2) Living Water.  After Jesus asks for a drink, “The Samaritan woman said to him, ‘How is it that you, a Jew, ask a drink of me, a woman of Samaria?’  Jews do not share things in common with Samaritans.  Jesus said to her, ‘If you knew the gift of God, and who it is that is saying to you, ‘Give me a drink,’ you would have asked him, and he would have given you living water’” (Jn 4:9-10).  Just as a single man today giving a gift to a single woman might imply that he’s interested in her, and just as an engagement ring symbolizes that the man is serious, so, Jewish men gave bridal gifts (Cf. Gen 24:22-27).  Living water first refers to a fountain of water, a spring, but brides also washed themselves in preparation for their weddings with what’s called ‘living water.’  And ‘living water’ referred to water that purified from sins and made someone clean for worship (Cf. Num 19:20) (Pitre, 68-74).

3) Husband Language.  Right after the dialogue about living water, Jesus says, “‘Go, call your husband, and come back.’  The woman answered him, ‘I have no husband.’  Jesus said to her, ‘You are right in saying, ‘I have no husband’; for you have had five husbands, and the one you have now is not your husband.  What you have said is true!’” (Jn 4:16-18).  Scripture scholars state that the woman is a symbol of her entire people, the Samaritans, and Jesus, as God, wants to marry the Samaritans—how do we know this?  700 years before this event, the prophet Hosea married a prostitute as a sign that God was married to unfaithful people.  Just as the prostitute was unfaithful to Hosea, so were this Samaritan woman and her whole people (Pitre, p. 66).  This woman had five husbands, just as the Samaritan people worshipped five false male gods (2 Kgs 17:28-31), while still trying to worship the true God, the Lord (2 Kgs 17:32-34-41), which is why Jesus says, “And the one you have now is not your husband” (Jn 4:18).

In this season Loving the Liturgy, today Jesus is clearly reminding us that He, the bridegroom, wants to marry His people.  He gave us living water while on the Cross, and the Mass, as we’ve said many times, is the re-presentation of His death and Resurrection.  When we come to Mass, He offers us living water, spiritual nourishment, when He gives us His body.  This marriage symbolism is so important in Catholic theology that the priest has to be male.  Is marriage that important?  After everything we’ve said, as well as everything else in the Bible written about God’s marriage with His people, when we go to Mass, we’re supposed to look at the priest and see a bridegroom.  This is also partially why the servers here are only male.  This is not absolutely necessary, because girls can be altar servers, but is fitting.

However, every human soul, men and women, is feminine in relationship to God, meaning we receive Him, which is why we both men and women sit where you are in the nave of the church.  This is why, when I’m not celebrating Mass, but am participating, I will sit in the pews like you, as I did when I was at St. Peter’s Basilica in Rome.  This is why, when the priest says, “This is my body, which will be given up for you,” we hear marriage symbolism all the way through.  We’re the bride receiving Jesus the bridegroom.

So, my question for you is: Would you be late for a wedding?  Don’t answer that.  The point is: We shouldn’t be late or leave early.  Being on time is a sign of respect for other people, and sign of self-control.  It’s a critical sign to our children that this is the most important thing we do.  If we’re late for Mass, but on time for school and sports, our children will know which is more important, and they will lose faith in Jesus and not love Him.  It’s actually discouraging to see people arrive consistently late.  And I’m not talking about parents with young children, but about adults like me.  I used to make excuses such as, “I’m busy.”  And some of you unintentionally enabled me by saying, “We understand, Father.  You’re a priest.  You’re busy.”  Thank you, but no more.  No more excuses for me.  Don’t be nice to me.  Help me be more virtuous.

One of the action goals of this season is that from now on, we’re all going to arrive before Mass starts, and stay until the final hymn is completed, or, during Lent, until the sacred ministers and servers leave.  Part of this includes no more adults standing in the foyer when there are seats in the nave.  Why?  Because of the sign value.  How would you feel if you loved someone, invited them to your wedding, and they stood in the back when there were seats available?  I don’t think anyone does it intentionally to show disrespect, but we have to learn that certain gestures communicate certain messages.  All athletes are aware that, when they try to make the cut for a team, what they wear, how they stand, how they conduct themselves, communicate what they believe.  The same holds true when guys ask girls out on a date, or when we work at the office.  Over a long period of time coming to Mass late communicates that Mass isn’t important enough to improve our behaviour.  Nevertheless, if we do arrive late for Mass, just wait until there’s a moment when we can come in and sit in the pews.  No one will be annoyed; you’re not a disruption.  It’s better to come in and celebrate rather than stand in the foyer.

For the past week, we’ve counted how many people arrive late and leave early, and these are the results: 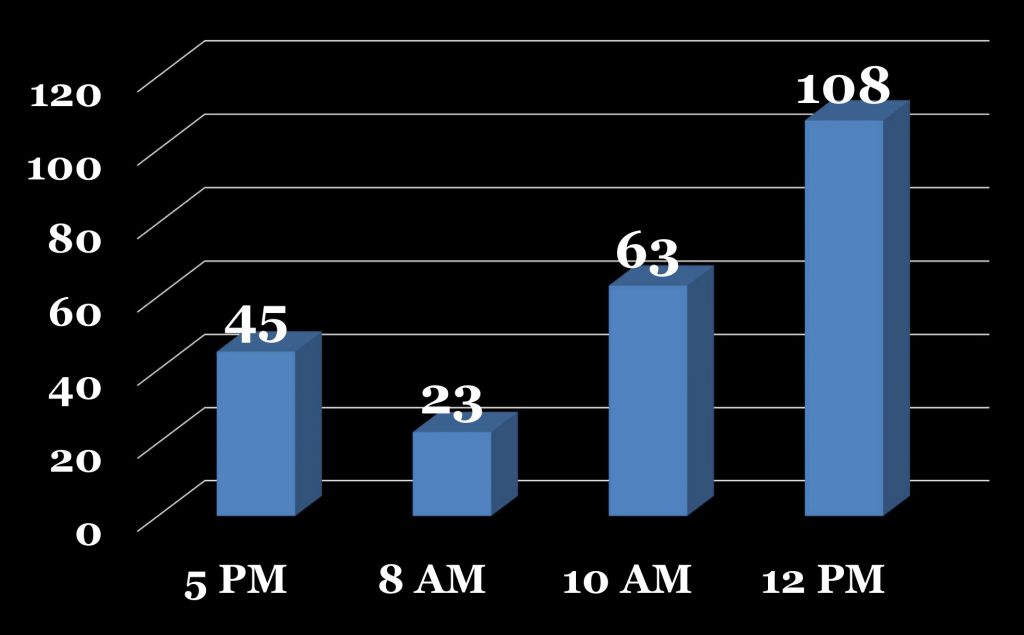 Again, this is the goal: Starting next week and from now on, we’re all going to arrive early.  (And the servers, choirs, everyone, will be ready to go five minutes before Mass.)  And if we’re late but tried our best, give yourself a pat on the back, because improvement is a huge part of sainthood.  The point is we’re trying!  And, if you’re always here early, please pray for the rest of us!

When we come in, even if we’re late, we’re not going to stand in the foyer unless we have young children and we’re trying to be respectful of others.  Once the children hit a certain age, we come closer to the wedding banquet.  And we will not leave Mass early from now on.  If we have a legitimate reason to leave early, like getting to work at a certain time, I understand that.  But, if we’re leaving early like I’ve noticed the back three rows always clear out early and people are already outside talking, all because we don’t want to get caught in a traffic jam, let me quote the words of our Blessed Lord, “Amen, amen, I say to you, too bad” (Jn 22:1).  We in this parish family haven’t seen each other for a week and you take off just like that?  Good families desire to see each other and talk.

This is going to be wonderful!  Things can only get better!  Don’t get discouraged or worried.  Years ago, one of you told me that I was late, and your criticism helped me grow!  Another time, I asked a mother why she was always late, and she was annoyed with me because I didn’t understand all of her motherly duties.  But then I said, “Why don’t you just start earlier?”  She brushed it off at first, then accepted it, and now it’s helped!  Just do your best.  Mass is not merely an obligation, but a joy, because it’s a wedding!  Jesus came to marry us all!