Let’s talk about the sins of cursing, profanity, and vulgarity.

Most of us (not all, but most) would agree that such language is generally wrong.  None of you swears around me.  How would you feel if I swore?  There’s a video by Jimmy Kimmel asking if children know any naughty words, and it’s insightful regarding our society: On one hand, the crowd cheers when a boy swears; on the other, they’re shocked when another boy uses a very disparaging word.  So, there’s a tension: We feel vulgar language isn’t right, but it’s not that bad.

For me, the key motivation to eliminate all vulgar language from my vocabulary came when a man here asked if Jesus would use such language.  Previously, I held that vulgar language would be acceptable to describe a horrendous situation.  For example, there’s a tragic murder, and so expressing our shock with, let’s say, the F-bomb, would be justified.  But then I realized: Jesus didn’t do this, not even on the Cross.

Many of us still use poor language because: 1) We haven’t really thought about it; 2) Almost everyone does it; 3) It’s the culture of our friends or workplace; 4) It’s a habit; 5) It’s not that bad; 6) As long as young children don’t hear, it’s okay.

The First Reading gives us the Ten Commandments.  The Second reads, “You shall not make wrongful use of the name of the Lord your God, for the Lord will not acquit anyone who misuses his name” (Ex 20:7).  The Catechism teaches this means respect for God’s name.  To make fun of someone’s name is to make fun of them.  God reveals His name in Scripture to those who believe in and love Him.  Think about that: Some of our friends who believe in God don’t know His name.  In Exodus, God tells us that His name is, “I AM WHO I AM” (Ex 3:14), because He is existence itself.  And when He became man, He took another name, Jesus.  The Catechism says, “‘The Lord’s name is holy.’  For this reason man must not abuse it.  He must keep it in mind in silent, loving adoration.  He will not introduce it into his own speech except to bless, praise, and glorify it” (2143).

So, saying things like, “Oh my God,” or using Jesus’ name flippantly, as we often hear in movies, is wrong, and is a venial sin.  However, the reliable moral theologian, Germain Grisez, says that the casual use of God’s name is not blasphemy, but irreverence.  Most people, when they misuse His name, don’t mean to insult Him, which is why it’s venial.  If we were to try deliberately to insult God or speak words of hatred towards Him, that would be grave matter (Germain Grisez, Living a Christian Life, 67).

In the same way, cursing other people, as in saying, “Go to hell!” without really meaning it, is venial.  And vulgar language, the words that videos often bleep out, is venial.

Now look at the Gospel, please, and consider three further points about respect for God.  Jesus goes to the Temple, sees people selling cattle, sheep, and doves, and exchanging money.  He makes a whip of cords, drives out the people and the animals, and flips tables.  Why?

First, He says, “Take these things out of here!  Stop making my Father’s house a marketplace” (Jn 2:16).  The Temple was a place to worship God, and the larger Court of the Gentiles, shown below, was the place where non-Jewish people could pray to the one true God—this was where people were buying and selling animals! 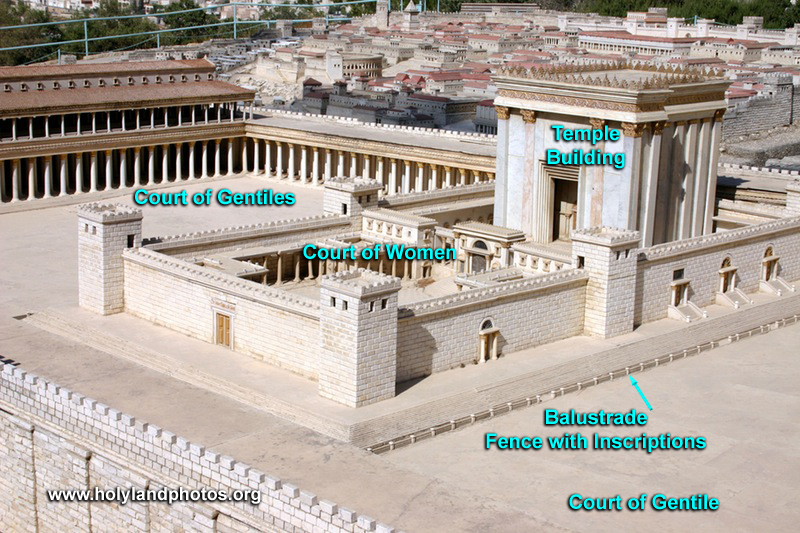 Jesus was furious because His own people were showing no respect for the place where all the nations were invited to come and pray.  He says in St. Mark’s Gospel, “Is it not written: ‘My house shall be called a house of prayer for all the nations’?” (11:17).  Based on these words, Pope Benedict XVI wrote that the fundamental purpose for Jesus’ cleansing the Temple was to remove obstacles to the worship of God (Jesus of Nazareth, Part 2, 18).

So, is our language impeding others from coming to God?  When we swear, we are impeding evangelization, that is, some people coming to know Jesus, because they can see our hypocrisy.  If we’re rude in our texts, emails, or posts, people see that we don’t live by a higher standard.  Many of us come from cultures where it’s normal to say, “Oh God!” but people will see it’s not important to us.  The people on our 11:02 prayer cards need us to speak better.  I’d encourage you to think about doing the 11:02 prayer again as we get ready for Alpha after Easter on April 28, 2021.

Second, right after Jesus gives this explanation, the Gospel records, “His disciples remembered that it was written, ‘Zeal for your house will consume me’” (Jn 2:17).  Pope Benedict says that when we’re zealous for God, it leads to isolation (22).  If we choose not to swear, we will be different.  Sometimes it seems that only weak people, that is, goody two shoes don’t swear because they can’t handle anything unpleasant.  But real strength comes from doing what’s right, even when everyone else does differently, and not cowering in front of other people who swear.  So, be a saint, and don’t be intimidated by those who swear.  If you stay strong, people will respect you for it.

Third, Pope Benedict points out that zeal means self-giving love.  For me, this is the most beautiful part of today’s reflection.  If we’re zealous for God, our words will change.  What if we were only allowed to speak when it was good for other people, that is, using words of affirmation, encouragement, or even challenge?  Language and love go together.  When language changes, love changes.

Here’s our simple challenge today: How should our language improve?

As we’re still in our Lenten desert experience, let’s end with quotes about three desert fathers, men in Egypt from the second to fourth centuries who completely abandoned the world to follow Christ, and went to extremes to purify their hearts, including guarding everything that came out of their mouths.

1) St. Pambo said, “By the grace of God, since I have left the world, I have not said one word of which I repented afterwards.”

2) Abba Anoub said, “Since the day when the name of Christ was invoked upon me, no lie has come out of my mouth.”

3) And it was said of Abba Or that “he never lied, nor swore, nor hurt anyone, nor spoke without necessity” (Douglas Burton-Christie, The Word in the Desert, 146).

Change our words, change our love.