Mr. Perry, our school principal, once shared a story about when he was young, he and his family took the ferry to Salt Spring Island.  He had a friend who led him down to the door of the engine room, where they snooped around, and when a worker looked angrily at them, his friend threw something at the man.  Then he and Mr. Perry ran away.  At the end of the trip, the ferry company called Mr. Perry’s home (because, back then, they had a list of all the passengers and knew who had children), and they asked Mr. Perry’s father if his children had anything to do with the incident.  His father asked his sons if they knew anything about it, and Mr. Perry lied right to his face.

What struck me about this story is that Mr. Perry still felt guilty about that lie, and when he shared the story, his face turned red.  He still thinks his father might have known that he was lying, and wanted to see if he would tell the truth.  And Mr. Perry never told his father the truth and apologized.

We’re talking about offending and hurting our parents.  A friend of mine shared how, as a teenager, he was obnoxious to his parents, and with no reason.  And I mentioned previously, that time when my father and I were arguing, then shouting at each other, and then my father approached me aggressively.  I then punched him in the face.  How can I make up for that?

The First Reading is about atonement.  It says, “It was the will of the Lord to crush him with pain.  When you make his life an offering for sin, he shall see his offspring…  Through him the will of the Lord shall prosper…  The righteous one, my servant, shall make many righteous, and he shall bear their iniquities” (Is 53:10-11).

Let’s focus on that first sentence: ‘It was the will of the Lord to crush him with pain.’  Obviously, this is referring to Jesus’ taking on our sins and suffering for us.  The Old Testament doesn’t make the theological distinction we’ve talked about before, between God’s indicative will, that is, what He wants to happen, and His permissive will, what He allows to happen.  So, the sentence is not saying that God the Father chose to inflict punishment on Jesus, but that Jesus freely chose to take on our punishment, and this was part of the Father’s plan.

Atonement is a reality we all acknowledge deep down, but which we ignore.  We know that we should be punished for the pain we’ve deliberately caused our parents and others.  Punishment recognizes that something wrong has happened; there’s an imbalance of justice, and we need to make up for it.

When I hit my father, he forgave me, but I hurt him and our relationship.  And to make up for the pain I caused, I would want to take on that pain, to make it up to him.

There are different ways to do this, whether I apologize, do penance on his behalf, or do a good work for him.  The point is that I make a sacrifice to atone for the harm I’ve done.

Dr. Gary Chapman is famous for writing his book The Five Love Languages, and one of his ideas is apologizing in a way someone can understand.  There are five elements of an apology: I’m sorry; I was wrong; How can I make this right? I won’t do that again; Will you forgive me?

His third point, ‘How can I make this right?’ is about atonement.  Not only do we have to return a stolen iPhone, tell people the truth, but we have to do something more to restore justice.  For people whose love language is words, we tell them how much they mean to us; for service people, we prove our regret by doing something extra for them; for gifts people, we give them something that shows we’re thinking about them; for time people, we spend extra time with them; and for touch people, a big hug could help (Gary Chapman, A Teen’s Guide to the 5 Love Languages, 105).  These actions are sacrifices and take extra work, and could involve some pain.

We come back to the First Reading, ‘It was the will of the Lord to crush him with pain.’  Considering all the pain people have caused God, the debt we owe Him is enormous.  If we think about all the harm we’ve caused during our life, the pain we’ve caused our parents, family, friends, even strangers, the punishment we deserve is more than we can pay.  We can’t make it up to God.  But Jesus, out of love, freely chooses to take on our punishment, and it literally crushes his body and soul, with pain.

There once was a family of four: a father, mother, and two sons.  They loved each other, and the best part of their day was having dinner together, sharing what they did, laughing, and praying for each other.  But when the younger son was 12, he started ignoring his parents, and the most hurtful thing was that he started showing up late for dinner.  His parents asked why.  He gave bad excuses: friends, homework, busyness.  His father warned him that his mother had worked hard to cook for him, and if he kept showing up late, he wouldn’t eat dinner.  “You can’t keep on disrespecting your mother like this.”  Then he gave him a second warning, and a third, but the boy didn’t listen.  The parents were hurt.

One day, he showed up late again.  The mother served the father his plate of food, then herself, then the older son.  And she gave the younger son an empty plate.  The father said to him, “This is justice.”  They didn’t talk during the meal.  The younger boy started feeling badly for what he had done, and also started feeling hungry.  Mom and dad ate, but the older brother didn’t touch his food.  He looked at his mom and dad and they both knew what he was going to do.  He took his younger brother’s empty plate and passed him his own plate of food, and he said, “This is mercy.”  The younger brother ate, but his older brother went to bed that night hungry.

This is what the First Reading means when it says, ‘The righteous one, my servant, shall make many righteous, and he shall bear their iniquities.’  Our older brother, Jesus, suffers the punishment of His younger siblings.  He loves the Father on our behalf, and so we’re made righteous.  Jesus is the only One Who can make up for our sins.

This is part of the central message of Christianity.  God the Father not only loves us but desires a relationship with us (André Regnier, Clear & Simple, 66-67).  But we don’t experience His love because we’ve distanced ourselves from Him through our freely chosen sins.  Jesus came to reconcile us with the Father, by taking on our sins and atoning for them.  The question for all of us is do we want to accept Jesus’ invitation to restore our relationship with God the Father? 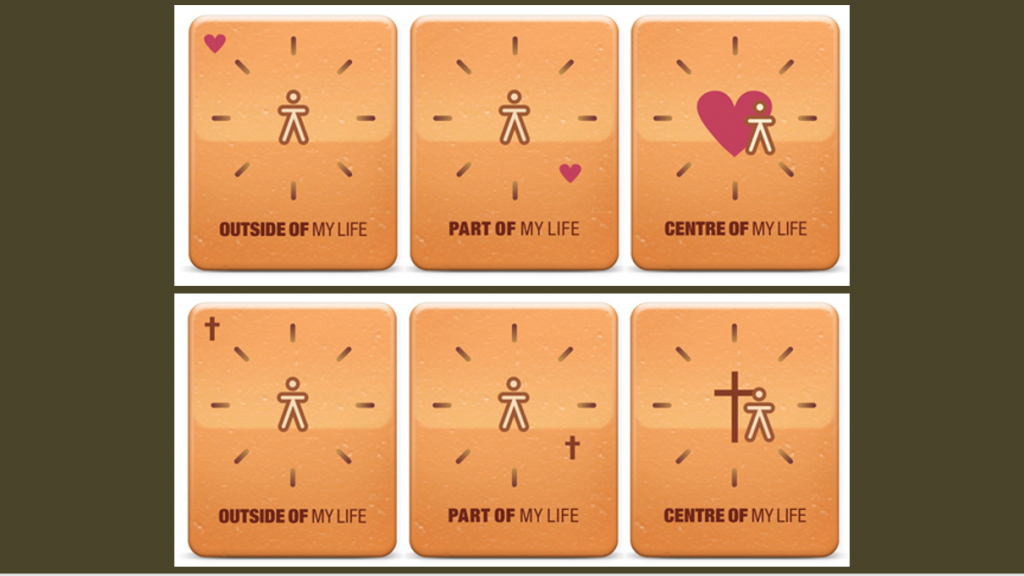 Which of the three bottom images represent where Jesus is right now in your life?  Where would you want it to be?  Would you want to move to the third image, and make Christ the centre of your life?

There are many different ways we can do this.  Here’s one example of a prayer:

“Jesus, I know that you are the son of God and have given your life for me.  I want to follow you faithfully and to be led by your word.  You know me and you love me.  I place my trust in you and I put my whole life into your hands.  I want you to be the power that strengthens me and the joy which never leaves me.”

This prayer comes from Pope Benedict XVI, in case you’re wondering.  And it can be made anywhere, even in the silence of our hearts.

Today’s Reading helps us prepare for our Christ the King Challenge in five weeks, on Nov. 21, 2021.  Again, the question is: Have I made Jesus the centre of my life?  Please keep on thinking and praying about it.

I knew, when I was a teenager, how much I had offended God and others, and how I could never repay what I had done.  The only Person Who could repay the debt I owed was Jesus—this is justice.  And when He offered to take away my sins in Confession, I was overwhelmed with love—that was mercy.  That’s when I made Jesus the centre of my life.  I hope you, too, can see the need for justice in your life, and God’s offer of mercy.