Please don’t get too shocked when I tell you the following incident.  One Sunday morning, when I was 17, I got into an argument with my father during breakfast.  He raised his voice and then I raised mine, and, because I was physically more mature and more confident than before, I didn’t back down.  It got to the point of full-volume shouting, and eventually he walked toward me aggressively, and I actually punched him full force in the face.

I have no recollection of choosing to hit him.  All I can remember is the next moment, when my brothers tackled us to the sofa and were shouting at us to stop.  It was an absolutely awful moment.  I walked out of the room, got in the car and drove off.  I’ll tell you later what I did.

For now, I’d ask, what would you do after a moment like that?  More generally, what do we do during crises in our lives?  And how do we respond during spiritual crises?  Some of us have been spiritually dry for months or years, and nothing’s changing, while for others among us, our faith has declined.

Jesus doesn’t want this.  He wants us to be able to stand strong during crises and even grow through them.  How?  Through commitments.  If you haven’t been here recently or if you’re a guest, welcome!  For the past four weeks in the Gospel about the bread of life, plus the homilies about it, Jesus has been leading us towards making a spiritual commitment, because commitments give stability.  If, for example, we have a crisis in our physical health, then commitments to a diet, to regular exercise, and to seeing a doctor will give stability. 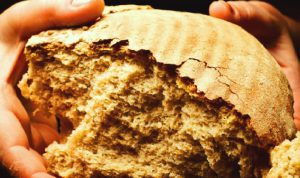 Today’s Gospel is about making a spiritual commitment.  Jesus says, “Very truly, I tell you, unless you eat the flesh of the Son of Man and drink his blood, you have no life in you”(Jn 6:53).  This is some of the best news ever, that we get to have true life!  But many of the disciples say, “This teaching is difficult; who can accept it?”  They found it difficult to accept that Jesus was the bread of life come down from heaven (Jn 6:41)(Fr. Raymond Brown, The Gospel According to John I-XII, 299), and that it was necessary to eat His flesh (Jn 6:53-55) (Francis J. Maloney, The Gospel of John in Sacra Pagina, 230).  He already explained it in depth and insisted He wasn’t using a metaphor.  Now He says, “Does this offend you?”  In other words, is the teaching too hard to accept?  Because accepting this teaching would involve serious changes to their lives.

So Jesus says three things: 1) “It is the spirit that gives life; the flesh is useless” (Jn 6:63), meaning that we shouldn’t judge His teaching in a human way, trying to conform it to us; rather we should conform ourselves to it.  What we need is the Holy Spirit, to make this commitment.  2) He says, “The words that I have spoken to you are spirit and life” (Jn 6:63).  He’s reminding us that His teaching on the Eucharist is life-giving!  3) “No one can come to me unless it is granted them by my Father” (Jn 6:65).  To commit is a grace of God, but a grace the Father wants to give us, and for which we should ask.

After the fight with my father, I knew what I had to do, to pursue a commitment, if you will: I had been taught at our youth group that the Eucharist is Jesus.  So, I drove with tears in my eyes to the chapel at St. Paul’s and sat in front of  Jesus.

He was my stability during the crisis.  I never doubted God’s love because the God who loves me was right in front of me.  I never asked, “Why is this happening?”  My faith was never shaken.  Why?  Because He never promised me an easy life; only that He would be with me during difficult moments; and He Himself suffered and died for me.

During that time of prayer I also knew that I was supposed to act like Him, so I admitted I was partially to blame for that fight.  And then we talked about what I had to do.  I drove home, then went back to church for the evening Mass, went to Confession, and afterwards my dad and I reconciled.  I even remember being at the computer a day later, and my dad walked in, and I said, “Dad!  What happened?”  because I saw he had a black eye.  He said with a smile, “You punched me.”  It felt horrible!  And then we hugged.

Now how did I receive so many graces?  Jesus offers all of us His grace all the time!  But much depends on our receptivity.  That’s why commitment is key: When we’re hurt, scared, frustrated or angry, we do all sorts of crazy things: We retaliate, we run away and give up, or we complain, gossip, etc.  However, a commitment to being with Jesus means a chance to receive His forgiveness, courage, and strength.

Let’s say there’s a husband and wife, who have pretty much equal lives and equal amounts of faith, but only one of them has made a commitment to Mass every Sunday.  Now, during a time of problems with their kids, they’re so discouraged that they have no energy to do anything, so one chooses to go to the computer to relax for a few hours while the other follows through on the commitment to go to Mass.  This person receives some smiles from other Christians, which is always uplifting; as well as God’s Word, which reminds them of what’s important and what God is doing; they receive the Eucharist which strengthens them, gives them hope, and they pray for their children.  But the other spouse has stayed in their own little world, together with negative, judgmental, resentful thoughts, and what have they received?  Nada.

Here’s another example.  Susan is a professional woman in her 30s, about to be engaged.  She decided to attend daily Mass when possible, three months ago.  Since then, she’s realized that “she experiences God’s peace more frequently than before and… has more patience and greater availability to others” (Fr. Timothy Gallagher, OMV, The Examen Prayer, 82-84).

She’s also made another commitment: To review the previous day in prayer with Jesus.  And, one day, during her review, two things come up: 1) She recognized that she had a heaviness of heart when she woke up the day before.  But, because she made a commitment to Mass and prayer, she went anyway, and during prayer, she now sees that the heaviness was a tactic of the devil to discourage her.  2) The day before, she was going to have lunch with a co-worker who’s going through personal problems.  But, because Susan herself was burdened, she didn’t bother, and now she realizes, in the presence of Jesus, that she should do it today.  It’s only because of this commitment to reviewing the previous day with Jesus that she had these insights.

There’s a relationship between our level of commitment to Jesus and the blessings we receive.  We can put it this way: Tell me what commitments you’ve made, and I’ll tell you how well you’ll do in a crisis.  I’ve seen many of us already make spiritual commitments, that’s why we’re already spiritually solid. 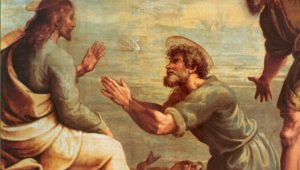 Jesus today is trying to persuade and win us to make more commitments, because crises will come.  Some of His disciples chose not to follow Him anymore, while St. Peter said, “Lord, to whom can we go?  You have the words of eternal life.  We have come to believe and know that you are the Holy One of God” (Jn 6:68-69).  In other words, what else are we supposed to do?  There’s no other good choice.  So, what commitment, specifically to the Eucharist, is He inviting us to make?

Is it to Sunday Mass?  As we said last week, this is an obligation for Catholics, because it’s necessary for our spiritual survival and growth.  Could it be going to a daily Mass during the week?  Is Jesus asking us to commit to going to visit Him in the chapel? 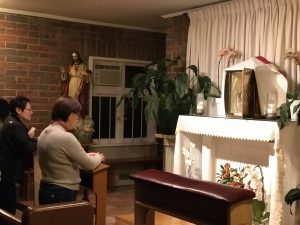 We’re going to start renovating our chapel so that it’ll be a place where we can encounter Jesus, and one of our parish goals is to have everyone commit to 15 minutes a week with Jesus.  We hope to finish the renovations by early 2019.

Jerome, our seminarian, follows the example of Ven. Fulton Sheen and does a Holy Hour every day.  This has inspired me to commit to doing a holy hour every day, too;  it will be a sign of my dependence on Jesus and a sacrifice.  Now, don’t get me wrong, I already pray about three hours a day, not including Mass, but I never committed to a Holy Hour because it was hard to commit to one full hour in a row; I also noticed I still wanted my time on my terms, when it’s convenient for me—these are not good reasons.

We have Alpha coming up on Thursday.  Here are two reasons for all of us to take it: 1) If we haven’t encountered Jesus in a very real way, Alpha is a place to go, because we encounter Jesus’ presence through other people and through its amazing film series.  2) Who here already loves the Eucharist?  Then shouldn’t we share it with others?  Jesus wants us to share all good things with others!  But we don’t start with the Eucharist, because it’s not always tangible.  We start with Alpha, which is the best tool to reach out to people we love.  Don’t keep the graces of the Eucharist to yourselves; they’re meant to be shared.

Our parish vision says, “With the Eucharist at the centre,” because the Eucharist is Jesus and it’s the Church’s greatest spiritual gift (CCC 1324). 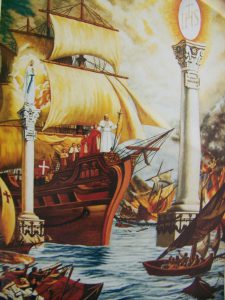 In 1862, St. John Bosco, an Italian priest, had one of his famous, supernatural dreams.  In it, he sees the Church represented by a tall ship, whose captain is the pope.  Attacked by smaller ships and violent waves, he tries to steer the ship towards two columns: 1) a smaller one which has a statue of Mary, with the title Help of Christians on top; 2) a taller, larger column with the Eucharist on top.  Once in between, he docks the ship with chains to both columns, and there’s a great calm (Forty Dreams of St. John Bosco, 205-211).

The message is obvious:  If we have the Eucharist and Mary, we’ll be safe during crises.  The Eucharist will make sure we’re not just loving Jesus in the abstract, but in a real way, and Mary will keep us humble.  If we have these two pillars in our lives, we’ll be like rocks!

The more commitment to Jesus, the more stability.