It’s a funny situation: Some people think they know what I want to hear when I ask them, “How often do you go to Mass?”  I ask this question usually before Baptisms, first communions, and Confirmations, because, as we said in June, sacraments are signs of the covenant, meaning God pledges Himself to us and we pledge ourselves to Him.

You know what I want to hear?  The truth.  The answer, “Father, I miss Mass sometimes, but I’ll try and do better,” is much better than a lie.  (By the way, if ever someone here hasn’t told me the whole truth, I forgive you.  And please forgive me for the times I’ve hurt you.  Let’s start afresh!  Whether we’re new here, a guest, or have been coming here for a long time, today’s a fresh start.) 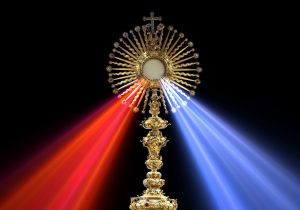 Our situation is very similar to what happens in today’s Gospel: Jesus gives a teaching, then there’s resistance, and then He insists and gives reasons.  He starts out saying, “I am the living bread that came down from heaven.  Whoever eats of this bread will live forever; and the bread that I will give for the life of the world is my flesh” (Jn 6:51).  But the people resist this teaching, “How can this man give us his flesh to eat?” (Jn 6:52).  Then He insists that we have to eat His flesh, giving, in total, six reasons:

The Eucharist can give all these benefits because it truly is Jesus; He’s truly present in what looks like bread.

So, first question is: Was Jesus using a metaphor?  In other places He used metaphors such as, “I am the gate,” or “I am the vine,” but notice that no one ever questioned Him about these sayings because they knew He was speaking metaphorically.  Yet when He insisted that we have to eat Him, people start questioning because they knew this was no symbol.  When they doubted Him, He didn’t explain it as a metaphor but actually doubled down by saying that His flesh is true food.  He even used more graphic, physical words: In the Greek, He switched from “eat” my flesh (Jn 6:50-53) to “chew” (Jn 6:54,56,58).  That’s why, for the first 1100 years of Christianity, as shown in earliest Christian documents, all Christians believed this.  It was only later that reformers started changing Christian belief.

But how can bread be His flesh?—Christians can ask this.  Clearly, it’s a mystery that we can’t understand perfectly. However, philosophers offered an explanation using two technical terms: substance and accident. “‘Substance…’ means what stands under the appearances (accidents), which can shift from one moment to the next while leaving the subject intact.  Appearances can be deceptive” (Avery Cardinal Dulles, How Real is the Real Presence? in Church and Society, 456-7).

Clearly accidents can change but not the substance.  Philosophers posit that God is able to change a substance without changing the appearance: When Jesus celebrated the first Mass, He must have changed the substance, not the appearance.  Hence the word “Transubstantiation,” which means literally across the substance.

So, after the consecration, can we call it “bread”?  No.  It looks like bread, tastes like bread, but what is it?  Jesus’ body.  And, because it’s Jesus’ body and no longer bread, if I have an allergy to gluten and the Eucharist, will I have an allergic reaction?  Yes, because it still has all the properties of bread.  We never said that it changes chemically; we just said the substance changes.

To have faith in the Eucharist requires faith in Jesus.  This week, we’re starting another round of Alpha—this is where we start, getting to know Jesus.  This is our chosen tool of evangelization, because you generally don’t start with the Eucharist, but with Jesus.

And, if we love Jesus, shouldn’t we love the Eucharist?

Imagine one day we get a text that says, “Jesus is coming to B.C. Place Stadium.”  What?  So we check our newsfeed, turn on the radio, watch TV and find out that thousands of people, including non-Catholics, have been seeing visions and hearing voices that said Jesus is going to appear at B.C. Place next week.  Wouldn’t we go?  The whole world would go!  But the thing is: Jesus is here, in our church, every day.  He’s in every Catholic church. 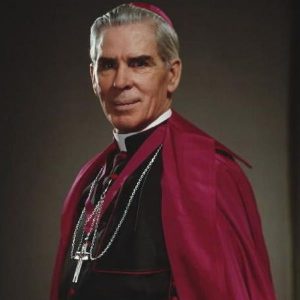 Someone once asked Archbishop Sheen why he made a holy hour every day of his life, that is, one hour of prayer before the Eucharist.  It was because a priest from China told him a story about an eleven-year old girl: When the communists took over China, they expelled religion and put this priest under house arrest.  They desecrated his church and threw the tabernacle on the ground and the Hosts spilt out everywhere.  From the previous Mass, the priest knew how many Hosts were in there: 32.

She did this every night for 32 nights.  “On the thirty-second night, after she had consumed the last… host, she accidentally made a noise and woke the guard who was sleeping.  He ran after her, caught her, and beat her to death with the butt of his rifle.  This act of heroic martyrdom was witnessed by the priest, as he watched grief-stricken from his bedroom window.  When… Sheen heard the story, he was so inspired that he promised God he would make a holy hour of prayer before Jesus in the Blessed Sacrament, every day of his life.”

Jesus gives Himself under the form of bread so that He can nourish us!  Remember that we said that the Jewish people weren’t allowed to drink the blood of animals?  Why?  Because “life is in the blood; to drink animal blood would be to participate in the animal nature.”  That’s somewhat logical: When we eat food and digest it, the nutrients become part of us.  So, following that logic, when we eat the Eucharist, Jesus becomes part of us!  We assimilate Him into our blood, and to drink His blood means to participate in divine nature.  We even say that we don’t assimilate Him, but He assimilates us, because His nature is higher than ours. 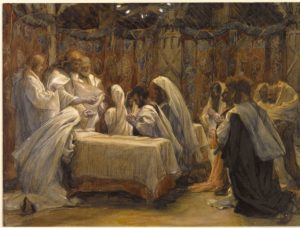 There are other benefits of the Eucharist.  The Catechism officially lists these ones:

1. “Holy Communion augments our union with Christ” (1391), meaning we become one with Him.

2. “Holy Communion separates us from sin” (1393), meaning it cleanses us from past venial sins and protects from future sin.

3. “The Eucharist strengthens our charity” (1394), and enables us to break our disordered attachments.

4. “The Eucharist makes the Church” (1396).  This one’s interesting: We actually believe that churches that don’t have the Eucharist (such as Protestant churches) are not churches in the true sense of the term; they are what we call ‘ecclesial communities.’  (We’ll talk about this one another time.)

I know it’s a struggle for some of us to get to Mass every single weekend.  But, let’s start with these truths: The Eucharist is Jesus, and Mass is for our benefit.  If we can admit these, eventually, with God’s grace, our hearts will come around.  The challenge this week is: Can we admit in our head and hearts what Jesus is teaching us?  How then are our actions going to change?

Bl. Pier Giorgio Frassati was a model of who we all want to be: fully human, energetic, loving God, family and friends!  He was a regular college engineering student who loved sports, and got active politically and helped thousands of people.  But what was the secret of his life? 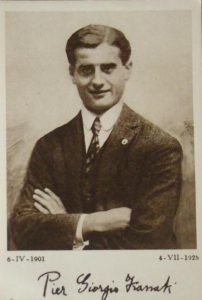 Once he encountered Jesus, he wanted to be with Him all the time.  “He started going to daily morning Mass as a teenager without his parents knowing it, sneaking out through the window down by a rope, then coming back home and falling asleep…  When he played pool… he’d say, ‘If you win, I’ll pay you money; if I win, you come to do a holy hour with me…’  When they went hiking (which he loved), he would make sure it was near a church; if it wasn’t, he would use his money, pay to get a priest to come out and celebrate Mass at the top of the mountain; if he couldn’t get a priest, then he wouldn’t go on the trip. During trips when everyone was on a train, they’d pass around snacks, but, after midnight, he’d stop eating.  Why?  Because back then, one had to fast from midnight until the time one received Communion and he wanted to receive Communion the next day.”

He knew the Eucharist is Jesus and is our greatest gift.