The topic today is the sexual abuse scandal and its cover-up, but the focus is on Jesus.  Jesus says, “The truth will make you free” (Jn 8:32).  So let’s admit what’s happened and what is happening.  I’m going to be honest because I love you.  And if you’re a guest today, welcome.  You’ve come at a difficult time, so I hope you’ll understand what we do here.  At this parish, we desire to become saints, and part of becoming a saint is dealing with reality. 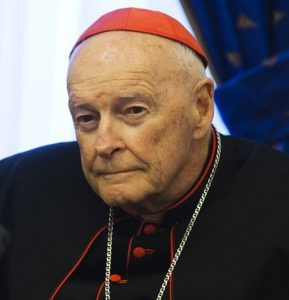 Let’s start with the facts.  A few months ago, accusations of sexual abuse against the former cardinal of Washington, D.C., Archbishop McCarrick, were found credible by the Archdiocese of New York.  Ralph Martin writes: “What has been so disturbing… is the fact that there had been numerous warnings… that he was a homosexual predator, harassing many seminarians, priests, and young boys, for many years, but nothing had ever been done about it…  Even after a delegation… went to Rome to warn the Vatican… he was promoted…  Even after lawsuits accusing him… in two of his previous dioceses had been settled with financial awards, he was still promoted.”

Then, a few weeks ago, a Pennsylvania grand jury report outlined abuse since the 1940s by over 300 priests against 1000 child victims, and their cover-ups.

And things got worse this past week.  The former papal nuncio to the U.S. has now accused Pope Francis of knowing about McCarrick’s sins and covering up for him, and, when Pope Francis was asked about this, he said he wouldn’t comment—we can be honest: This doesn’t look good.

What’s particularly angering is that cover-ups are still occurring after 2002, when the U.S. Church went through its greatest scandal.  They were supposed to know better, and yet they went back on their word.

Most of the abuse happened between the 1960s and 1980s.  Thankfully, things have gotten better because of improved policies and practice: In the last two years, 0.005% of the clergy in the U.S. have had a substantiated abuse claim against them. (It may be a much bigger number in places like Honduras and Chile right now, but the situation in the U.S. has improved) .

Yet, despite improvement, massive problems remain: Why didn’t anyone listen to the complaints against McCarrick?  Why were there settlements with victims where they signed a non-disclosure statement?—that’s a cover-up.  Why are the bishops and the Vatican still trying to downplay the problems, giving “bureaucratic, carefully worded, evasive statements”?

Jesus today speaks through St. James, in the second reading, “Be doers of the word, and not merely hearers who deceive themselves.  Religion that is pure and undefiled before God, the Father, is this: to care for orphans and widows in their distress, and to keep oneself unstained by the world” (Jas 1:22,27).  This letter was written to Christians in the first century, and St. James was reminding them how to be Christians, that: 1) they need to act on what God says, not just hear it; 2) they need to take care of the most vulnerable; and 3) they should not be worldly.  God wants us to have a pure religion, but we’ve defiled it, and the hierarchy today has failed in those three areas.

1) We hear statements from the clergy expressing sorrow, anger, and shock, but we’re still not acting on God’s word.  Why?  Because we keep on avoiding the truth about the real problems.

Two years ago, Phil Lawler, a good Catholic journalist and commentator, spotted the real problem: “The crisis is… a crisis of clerical corruption.  Our priests and especially our bishops have failed as Church leaders, because they adopted the wrong standards of leadership…  The… system… rewards timidity and complacency.  Individual priests may be holy… but the clerical system is corrupt…  While there are both good men and bad men in the system… the good men are unable to establish control and institute reform.)…  What the bishops “didn’t get” in 2002 is the… reality that they were the problem.  Yes… the priests who molested young people were a huge problem.  But the secondary shock—the scandal that rattled public confidence in the Catholic hierarchy—was the realization that many bishops had covered up the scandal…  During the “Long Lent” of 2002, Americans had learned about a culture of omertá in the clergy,”  meaning a code of silence to protect each other.  It’s okay to admit this, because the truth will set us free.

2) We haven’t taken care of the vulnerable.  These are our children!  As Archbishop Miller said, “What father would cover up the abuse and tell his child to ‘get over it’ in order to protect the family’s ‘reputation’?”

I have a friend who was sexually abused by someone in the Church and I think it ruined her.  When I think about what happened to her, I typically lose all my energy.  We have people here who have been affected by sexual abuse in the Church, and to you, on behalf of the Church, I’m so sorry.  If there’s anything we can do as a parish to help, please let us know.

3) There’s worldliness in the hierarchy.  For example, there’s little discipline; many of the clergy no longer call a sin, sin; we want to be popular and accepted—that’s worldliness.  Everyone’s finally admitting there’s also a homosexual subculture in the priesthood, and we’re not talking about men with same-sex attraction living a chaste life (I know many good Catholics with same-sex attraction that live chaste and holy lives); we’re talking about actively breaking vows.  It’s hypocritical if we preach about the sins of the world but not our own.

Some of you have asked how I feel so that it can help you process how you’re feeling.  On a spiritual level, this doesn’t affect my faith.  But I will be honest: When I heard about the accusations against Pope Francis and his collaborators, over supposedly many years, I felt, for the first time in my life, a temptation, for about one second, to give up on the Church.  But a temptation is not a sin, and the praise goes to God that I didn’t sin.

Yet there was a grace in this for me: I understood better what many Catholics go through.  Right after the temptation, I thought, “No.  I’m not going to leave.  I will never leave.  I’m Catholic because Jesus founded the Church.”  That’s the Scriptural, historical and theological truth.

So, on a faith level, which is the most important, I’m fine.  On an emotional level, I’m furious.  The details about rape and abuse are graphic.  Most of my anger, however, is directed towards the cover-up and the lack of accountability because these are still ongoing.

So what is God calling us to do?  Let’s focus on those three things St. James teaches: 1) Be doers of the word!  If we’re struggling with the scandal, we should talk about it with someone spiritually mature, because the devil wants everyone to lose faith and stay far from the Eucharist—that’s the key, stay close to the Eucharist.  If we leave the Eucharist, we leave Jesus.  That’s why our vision is “centered on the Eucharist,” not on the pope, bishops, and priests (like me).  Why are we Catholic?  Because of Jesus, the Eucharist, and Mary.

Bishop Barron just said a few days ago that baptized people are prophets “fighting for the Church we believe in…  Fight by writing a letter to your bishop… to the pope.  Fight by your presence at Mass… by organizing fellow Catholics.”   Tell Archbishop Miller how you feel and think; he will listen.  Some of you have told me how you feel, and this strengthens me to speak the truth.  Break the culture of silence.  Get active on social media and let the hierarchy know what you think. 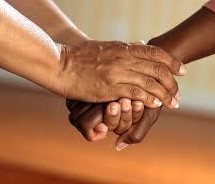 2) Take care of the vulnerable.  Let’s reach out to victims.  P. Abbot once told me that he believes a lot of women have suffered sexual abuse and don’t talk about it—that’s understandable.  But, please know that God wants us to be healed.  Whether it’s through prayer, or with family and friends, or with a counselor, God wants us not only to be healed, but completely renewed, and we know, with God, all things are possible.

Archbishop Miller says, “If you are aware of any situation of abuse happening now, please immediately contact law enforcement authorities.  If the abuse involves a member of the clergy or any person engaged in ministry in our Archdiocese, please also make us aware.  You may find our web page on reporting abuse at: http://rcav.org/safe-environment-reporting/.  If you know of any sexual abuse that occurred in the past, but have not reported it before, consider doing so now.”

3) No more worldliness.  Only saints will be able to solve this problem.  Last week, I saw my brother who’s a priest, and he mentioned something very inspiring: He talked about how he loves pictures of priests from the past who were “gaunt”—you know why?  Because they were fasting a lot, and extremely disciplined.  He thought that was awesome!  Now I know why he’s so thin, because he wants to be a disciplined, penitential, holy priest.

I’d like to end with what one of you wrote me, which captures the idea of acknowledging the truth and focusing on Jesus.  He said, “The alleged cover-up by the bishops compounded the wrong done, bringing the collective sin to be deserving of the ‘millstone around the neck of sinners thrown into the deep.’  I, too, am a sinner deserving this.”  Yet he also sees the good in the priesthood Jesus founded, “I can recall very vividly when I was in a confessional once, there was great illumination where the priest was that made my tears flow, and the voice I heard was one of great mercy and compassion, and my sense of being known even before I said the first word simply overwhelmed me.  I had no doubt absolving me of my sins was Jesus in the priest…  I pray that the scandals the Church is confronting will make the faithful recognize that Jesus in them cannot be altered by the wrong some priests and bishops have done.”  This is a great example of pure religion. 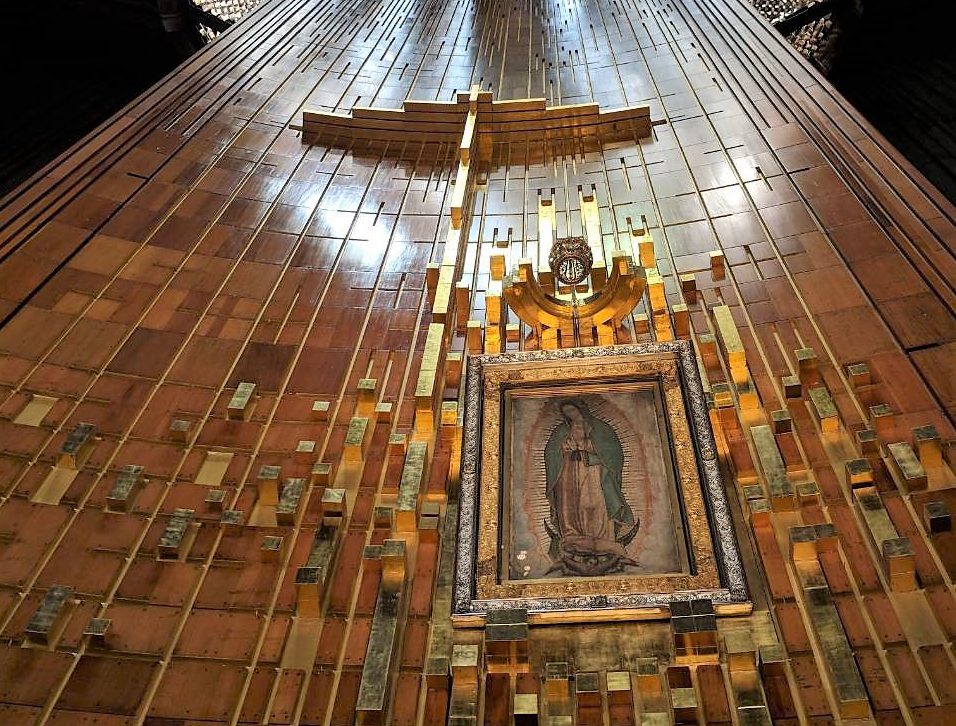