I’ll never forget a story about a Dominican priest who went to Calcutta to give a retreat for the Missionaries of Charity.  We’re going to break the story down into three parts.

Here’s Part I: One day, after finishing the retreat, the priest went back to his room, sat on his bed, and, all of a sudden, this horrendous stench came in through the window.  He walked over, looked outside the window, and below saw a man lying on the ground with a large abscess in his side, with maggots crawling around it, and he was moaning incessantly.  When the priest saw the man, he was immediately disgusted and shut the window for the simple reason that he didn’t want his habit (religious clothing) to catch the man’s smell.  He went over to his bed and sat down, and started feeling badly about what he had done: He was a priest who fed the poor and was a servant of Jesus, but wouldn’t love a dying man because he smelled.

Are we also guilty of not loving certain people?  As we continue focusing on hospitality in these months, we have to ask ourselves, “Why don’t we greet certain people at Mass?  Why do we minimize our interactions with them?”  Are we shy, too busy, or too tired?  Is it not that important for us?  Are these people not interesting enough for us to bother?

St. James, in the Second Reading, is writing to a first century Christian community that has the same problems as we do (Fr. Raymond E. Brown, An Introduction to the New Testament, 730): When they’re at Mass, they treat certain people better than others.  He starts off by challenging them: “My brothers and sisters, do you with your acts of favoritism really believe in our glorious Lord Jesus Christ?” (Jas 2:1).  He’s saying: If we really believe in Jesus, why aren’t we following His commands?  If we play favourites, without a legitimate reason, then St. James is saying there’s something wrong with our faith.

If Jesus, God Himself, were to walk into our church, wouldn’t we want to have a conversation with Him?  Then why don’t we do the same with other people?  Jesus says, “I was a stranger and you welcomed me” (Mt 25:35).

It’s actually a sin not to welcome a stranger when we can.  That’s because Jesus says, “I was a stranger and you did not welcome me…  Truly, I say to you, as you did it not to one of the least of these, you did it not to me.  And they will go away into eternal punishment” (Mt 25:43,45-46).

If we really believe in Jesus, we should imitate Him.  He loved the stranger, “for the Son of man came to seek and save the lost” (Lk 19:10).

If Jesus were running a church with 99 practicing Catholics and only one non-practicing Catholic came in, to whom would He go to first?  The answer is based on Luke, chapter 15, where Jesus tells us that He always goes after the lost one rather than the 99 others, not because He doesn’t love the 99—He died for all people!—but because the 99, that is, us, are already with Him!  So, we’re supposed to do what He does: Love those who don’t yet belong.

St. James then says: “If a man… in fine clothes comes into your assembly, and if a poor person in dirty clothes also comes in, and if you take notice of the one wearing the fine clothes and say, ‘Have a seat here, please,’ while to the one who is poor you say, ‘Stand there’… have you not made distinctions… and become judges with evil thoughts?” (Jas 2:2-4).  When we treat people differently in terms of our hospitality, we become “judges with evil thoughts.”

In our church, I don’t think we make a distinction based on being rich and poor.  I do think, however, that we may favour the rich in personality, the rich in making us comfortable, the rich in friendliness; we favour our friends.  Many people, for example, are friendly to priests but not to other Catholics. 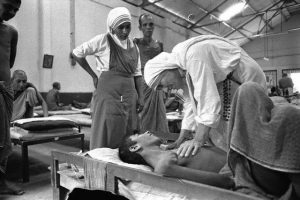 Here’s Part II of the story: While that Dominican priest was sitting on his bed feeling badly about how he had acted, he heard two voices outside the window, one of a younger woman and one of an older woman.  The older said, “I must, I must,” while the younger said, “No.  I will do it for you.  You go inside and tend to other things.  I will take care of this man.”  But the older insisted, “No, I must do this.  This is something I must do.”

So the priest went to the window and what he saw changed his life.  He saw St. Mother Teresa, down on her knees, picking up the man and rolling him into her chest while saying, “My Jesus, my Jesus, welcome to my home.”  When the priest saw that, he broke down.  He went to his bed,  knelt, and started to cry.  He prayed, “God, what is wrong with me?  Help me.  I want to be like that.  I want to be able to love like that.”

Similar to that priest, we might ask ourselves, “What’s wrong with me?  I want to be able to love like Jesus.”  Mother Teresa was so united to Jesus, so aware of how He loved her, so aware of His presence in other people that she said, “I must, I must.”  And Jesus is planting the same seed in our hearts today: “I must, I must.” 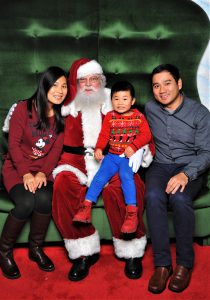 Today we have a huge celebration, when Simon, Janis, and Lucas Kan, will be fully welcomed into our Christian family through baptism, Confirmation, and the Eucharist.  In March, we briefly heard about them.  “At the beginning of 2017, they decided that they wanted to start going to church!  And they just happened to find St. Anthony’s.  When they got here, they met Barb at the Welcome Booth, and Barb was kind enough to sit down with them and explain where to find the readings.  Then, for the next few Masses, Barb would always sit with them.”

For those first few weeks, Barb acted like Jesus for Simon and Janis.  Then they experienced the hospitality of Alpha, and then the learning at Faith Studies, and now, 21 months later, we see the amazing fruit of welcoming a stranger as a friend!

Today is a challenge to our faith because Jesus is asking us to act more like Him.  But it’s also a celebration of what He’s already doing.  After the baptism, Simon, Janis and Lucas will put on a white alb, symbolic of their new spiritual birth in Christ.  Afterwards, feel free to applaud.  Give a big applause!  Now it’s true that Pope Benedict XVI famously said not to clap during Mass, and he’s right.  But, he specified if it’s for a human achievement.  That’s why even during papal Masses, some people clap during the homily as a sign of enthusiasm, and during St. Augustine’s Masses, people would clap in appreciation.  We shouldn’t cheer, but we should express our overwhelming gratitude for this divine achievement, because this is a work of God, a fruit of Jesus’ hospitality.

Here’s Part III of the story.  While the priest was crying and praying at his bedside, someone knocked on the door.  He opened it and there was St. Mother Teresa holding the dying man.  She said, “Father, he is going to die.  Would you bless him?”  He said, “Yes.”  He took the man into his arms, close to his chest, and began to pray.  And the man died shortly after that.

The priest later said, “My life changed that day, as I saw one lady who didn’t show any partiality, who saw every person she met as Jesus Christ.  She spoke to and loved everyone as if it were Jesus” (Jeff Cavins, James: Pearls for Wise Living, Disc 4, Track 15).

Here are five ways we can bless the strangers in our midst: 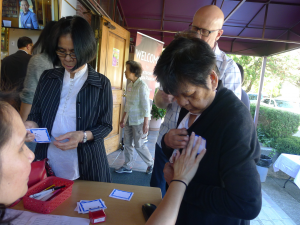 1) Be confident and smile at people.

2) Learn one person’s name every time you go to Mass.  You say, “Hi, my name is ______.  What’s yours?”  As your pastor, I want to empower you to do this.  Please look for new faces.  If there’s someone you’ve never seen before, you should feel you have the permission to go up to them and introduce yourself.

3) Let’s not reserve our seat at Mass.  If someone takes ‘our’ seat, there’s no reason to be angry.

4) This one may seem small, but it’s logical: When we take a seat before Mass starts, let’s not take the end of the pew, (unless, of course, we have a legitimate reason), because that forces people to jump over us to get a seat.  A more hospitable thing to do is to take a middle part of the pew and let people join us.

5) Join the Hospitality Team or the Name Tag Sunday Team.  We’re looking for people who love Jesus, are reliable, have the gift of hospitality, are willing to be trained, and love meeting people!

I noticed some months ago that Simon joined the Hospitality Team while Janis joined the Name Tag Sunday Team, and that gave me great joy, because they’re now giving back; they are sharing with others what they themselves have received.  But I must say I’m disappointed in Lucas who hasn’t done a single thing.

It’s our goal that we all steadily grow in this virtue, and that by Christmas, we can all invite someone, and they can receive what Simon, Janis and Lucas have received.  Wouldn’t that be amazing?  I would love for some people I know to come here and receive God’s blessings!  Let’s cooperate with Jesus in making this happen.  He welcomes strangers as friends.