1) Trust: “A person is able to trust or has a positive association with Jesus… the Church, a Christian believer, or something identifiably Christian.”

2) Spiritual curiosity: “A person finds himself intrigued by or desiring to know more about Jesus, his life, and his teachings or some aspect of the Christian faith.  This curiosity can range from mere awareness of a new possibility to something quite intense.”

3) Spiritual openness: “A person acknowledges to himself or herself and to God that he or she is open to the possibility of personal and spiritual change.”

4) Spiritual Seeking: “The person… is actively seeking to know the God who is calling…  Seekers are asking, ‘Are you the one to whom I will give myself?’… seeking to know whether he or she can commit to Christ in his Church.”

We’re talking about these stages towards becoming a disciple because today’s Gospel is about Jesus’ showing us the way of being a disciple.  It says, “Jesus went on with his disciples to the villages of Caesarea Philippi; and on the way he asked his disciples…” (Mk 8:27).  This may seem like a small detail, but in this section of St. Mark’s Gospel, that is, from chapter eight to chapter eleven, the phrase ‘on the way’ is used seven times (Ignatius Catholic Study Bible, 80).  Jesus and the disciples are on their way to Jerusalem, but He’s also teaching them what’s the way of being a disciple (Mary Healy, The Gospel of Mark, in Catholic Commentary on Sacred Scripture, 159).

He starts with two questions, “Who do people say that I am?” and, “Who do you say that I am?” (Mk 8:27,29).  You see, being a disciple is bound up with our answer to this question: If we say that Jesus is a good teacher, then we may listen to Him, but not try to become like Him—that’s not a disciple.  But if we say that He’s God, then we’ll give our whole lives to Him—that’s a disciple!  St. Peter gets it partially right when he answers, “You are the Christ” (Mk 8:29).  He’s right that Jesus is the messiah, which is what the word ‘Christ’ means, but doesn’t know what kind of messiah.

For some of us, we may be ready for Jesus to ask us this question, but, for others of us, we may not yet be (perhaps we’re new on this spiritual journey or we’re new at this church).  If we’re not, please know that Jesus respects our freedom.  He loves us and has made a commitment to us, but doesn’t ask for that same commitment right away.  When, for instance, He met t 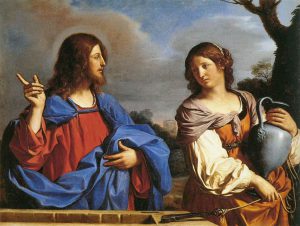 he Samaritan woman at the well, all theologians note that He didn’t start by telling her her sins or asking for a commitment.  He started with a conversation, progressively helping her to know who He is, and then leading her to a make a commitment (See CCC 547-548; also Jn 1:29-42).

No matter where we are, even if we’re mistaken about who Jesus is, He’ll help us.  St. Peter mistakenly thought of the messiah in earthly, triumphalist terms, so, right away, Jesus told them that He’s a humble messiah who would suffer for our sake.  Jesus will always correct our misunderstandings and challenge us to understand who He really is.

No matter where we are is a good starting point—we want to honour that—but how can we grow?  Here’s an example:

Jack gave his testimony a year and a half ago.  Although he had been a parishioner here for 36 years, he’s only been a disciple for six—there’s a difference, because one can be a Christian without being a disciple; one can go to Mass and not be a follower of Jesus.  Jack was reared non-Catholic, went to a Catholic school, learned prayers and about God but understood very little.  He said he couldn’t relate to God.  What stage would he be at here?  It’s hard to know.  He may be at the level of trust, which is a blessing!  Trust can be trust in God, Jesus, the Church, a Catholic friend, etc.

He probably wasn’t at the stage of curiosity, because curiosity starts with an awareness that there are more spiritual possibilities in life, and he hadn’t yet done anything active such as ask questions, exchange ideas or read about Jesus.  But, in his twenties, he got baptized!  What stage would he be at now?  Probably at least trust, but no further because he said he only got baptized to marry his future wife, Anna.  He did start going to Mass, but described it as “torture.”—ouch!  Thirty years pass and, in 2011, Anna introduced him to a Bible study.  He told us that he was fascinated by the stories in the Old Testament and said, “When I read the part where Jesus died for our sins on the crucifix my heart just ached.”  Where’s he at now?  He’s shot through curiosity and openness!  We know he was curious because he said he was ‘fascinated.’  We know he was open because he’s encountered Jesus and His love, and something stirred in his soul.

Look what happens next: He and Anna attended a Life in the Spirit Seminar and he said, “During the lessons it dawned on me that because I never had any faith, the Holy Spirit was not upon me.  I needed faith in order to understand.”  So he went to Confession for the first time.  What’s happening now?  He’s at the level of seeking, because he’s active, he knows a personal relationship with Jesus is possible and is asking, “Is Jesus the One?  Should I give my life to Jesus?”  He then started going to daily Mass, and said that he was slowly, without realizing it, developing a relationship with Jesus.  He began to put Jesus in the centre and was more mindful of what he said and did. Jack is now at the level of an intentional disciple, a follower of Jesus.  He’s not a saint… not yet, but did make a choice, a “deliberate act of the will” to imitate Jesus and change his life accordingly.

Now, this is only an example and every journey is different.  Nevertheless, the question remains: How can we grow?  To get to the level of trust, is there anyone in our lives we can trust, like Jesus, or someone connected to Him or to the Church?  Do we have some positive connection with something Christian?  None of us, absolutely no one, has ever moved closer to God without some trust.  This is why hospitality is so important, because we can be the bridge of trust for someone.  My aunt did this for me, who has done it for you?  When we welcome people to our church on Christmas, can we be people of kindness, integrity, joy? 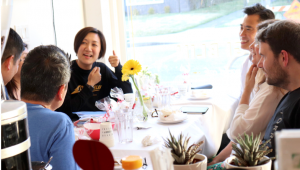 To become curious, we could read a Catholic book, ask questions, go to Alpha—Alpha, by the way, is perfect for all levels of conversion.

Openness is one of the most difficult jumps because we’re all afraid that we’re going to lose something if we move closer to God.

Remember Larry?  He was afraid that he would have to give up fishing and skiing to become Catholic.  I myself went through great fear when I felt God calling me to be a priest: I would have to give up so much.  But God never takes anything away from us to hurt us.  He only asks us to let go of certain things so that He can give us even better things!  A truth that really helped me was what a monk said to me, “I gave up a happy life for a happier one.”   If we’re on the verge of openness, we might want to talk to a trusted friend, or try praying, or going to adoration—adoration on First Saturdays is hugely helpful in opening our hearts. 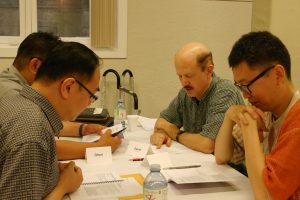 ble at the stage of seeking, because it focuses first on Jesus and walks us through the possibility of making a choice.

We could also volunteer in the parish with Works of Mercy or in hospitality.  And this journey leads to a possible decision.  This cannot and should never be forced; it must be made in freedom; it’s not done for anyone else.  We do it because we know it’s something we have to do.  Once we’ve made this decision, we’ll know, because it’s a conscious choice “to follow Jesus in the midst of his Church as an obedient disciple and to reorder one’s life accordingly.”

What if we’re already disciples?  The journey doesn’t end there.  Do we desire to become saints?  This is the final goal, what our parish is all about!  We want to become truly human, be Christ-like, be the best version of ourselves, be perfect in love, reach the heights of contemplation, and have the missionary heart of Jesus.

I recently read a book that explained why pastors may not be receptive to God’s plans, and the first question it asked was, “Have you yielded yourself fully enough to God?” (Bill Hybels, Courageous Leadership, 38) and I realized I hadn’t.

Think about setting a goal.  By the end of this calendar year, can we have grown in some concrete way?

Jazz, whom we hired to lead a small ministry called “Be Accompanied,” to guide people to become spiritual leaders, said she once accompanied this wonderful woman, Lucia, at Carleton University in Ottawa. Lucia was very skeptical of getting involved in a spiritual journey.  However, after they got to know each other, they had a spiritual conversation.  Jazz asked Lucia if she wanted to know what the Church taught in four simple points, and then proceeded to show her the relationships diagram that we use in Faith Studies:

Is Jesus outside of our life, a part of our life, or the centre?   Lucia answered, not by pointing to one of the three diagrams, but by drawing a dot at the top left corner of the page, completely away from the diagrams!  But, each week, when asked where Jesus was, she drew a new dot closer to the diagram, and eventually reached the first.

St. Peter started off only partially correct about who Jesus is.  But he eventually became a saint because he recognized that Jesus was God and yielded himself fully to Him!   Wherever we are on our journey, Jesus will show us the way to become a disciple and a saint.