Today’s homily is about three great reversals, where Jesus flips our expectations.  Let’s start with a video of today’s Gospel, and see if you can spot these reversals.

1) Who was actually on trial in that scene?  Jesus is being interrogated, but many scholars have argued that Pontius Pilate is the one on trial.  In St. John’s Gospel, there’s a phrase where it’s not clear who sits on the judge’s bench: Jesus or Pilate (Jn 19:13; Raymond Brown, The Gospel According to John XIII-XXI in The Anchor Bible, 880).  And theologically, we know that Jesus is the judge of the world, not Pilate.  Jesus judges all people according to love.  He loves us.  But do we love Him?

A year ago, we talked about seeing life as a test.  God “constantly watches your response to people, problems, success, conflict, illness, disappointment, and even the weather!  He even watches the simplest actions such as when you open a door for others, when you pick up a piece of trash, or when you’re polite toward a clerk or waitress” (Rick Warren, The Purpose Driven Life, 42-43).

So, we can’t escape this test in life.  Later on, when I ask, “Please raise your hand if you’ve made Jesus the centre of your life,” some of us might be uncomfortable with this.  But answering this question is just part of the trial of life.  Whether we realize it or not, Jesus is always asking us this question.

All of us first heard about Jesus through other people.  But there comes a time when we have to meet Jesus personally, when we see how much He suffered for our sake.  And that’s when we need to decide whether we love Him with all our heart.

2) There’s a reversal from cowardice to courage.  If we love Jesus, it’s still human nature to be afraid to witness to Him.  Remember how I told you that I was afraid of doing this Christ the King Challenge?  What if no one puts up their hand?

This is our source of strength as well: We follow a king that wears not a crown of gold, but a crown of thorns; His throne is a cross; His weapon is love.  That’s why He defeats Pilate.

When I look at reality from this point of view, then my fear diminishes.  I’m no longer afraid of what will happen today, because the kingdom to which I belong is not of this world.

3) There is a reversal in what we celebrate.  Jesus’ sacrifice for us is His glorification (Jn 12:23-24; 13:31)!  We celebrate Jesus on trial for us, because He shows us the greatest love.  And so, our celebration today is a reversal.  In the past, we Catholics celebrated mainly the externals, but they’re now often empty celebrations.  Not all, but most.  For example, we celebrate Baptisms, some people come for Faith Studies, go through the motions, but there’s not a commitment to Sunday Mass.  Weddings are focused on the couple and Jesus is just an add-on; so, it feels like a show.  Then, for Confirmations, children and families dress up, make a profession of faith, take pictures, and never come back.

Did you ever hear the joke about the priest who had a rat infestation?  They found all these rats in the basement of the church, and so they called the exterminators, but nothing worked.  So the priest decided to give the rats Confirmation and the rats never came back.

We will always continue to celebrate the sacraments because they communicate life, and I’m happy to say that there’s more sincerity about receiving the sacraments in our parish family, and we are even going to increase the level of expectations for them, but, we also need to start celebrating other great realities!  Let’s celebrate that people have come back to Confession, that people come to the chapel!  I celebrate when our children speak about Jesus, when they’re proud of being Catholic, when a Gr. 5 student understands that we must love God more than family, when people invite  friends to come to Alpha, etc.

Today, let’s celebrate that some people have made the most important decision!  Jesus loves us so much that He suffered and died for us, and put us at the centre of His life.  To make Jesus the centre of our lives doesn’t mean we’re perfect or even love Him perfectly.  All it means is that we’ve made a choice to have Him be the centre rather than anything else.  We want to consider Him first in all our decisions; we are intentionally trying to live like Him and follow His commands.  So, please raise your hand if you’ve made Jesus the centre of your life…  Praise God!

Keep your hands up, please.  Someone suggested that I also ask: Is there anyone who’s close to making Jesus the centre, and desires it?  If so, we want to affirm you, too!

Years ago, I told you about Bl. Miguel Agustin Pro, a Mexican priest who was falsely accused by the government of taking part in an assassination attempt.  What he actually did was secretly hold Masses and Confessions, and ministered to the sick in his various disguises!

On November 23, 1927, the government photographed his execution to discourage resistance.  Before he was killed by firing squad, he put his arms out in the form of a cross and shouted, “Viva Cristo Rey,” “Long live Christ the King!” 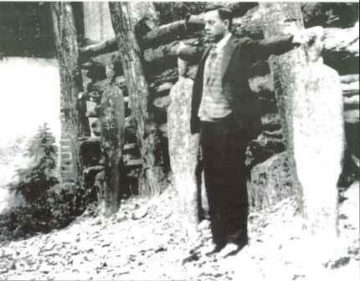 Apparently, when one of his sisters was crying, their father said to her, “Is this how you behave in the presence of a saint?  There is nothing to weep over” (Ann Ball, Modern Saints, Vol. 1, 303,311).  He blessed God for giving him a son who was a martyr, someone who loves God to the point of death—that’s the greatest thing to celebrate, and that’s a great reversal.  Bl. Miguel was on trial his whole life, and he declared that Jesus was the centre.