Mark wrote in his journal that things are a mess.  This past month for him has been dark, and he’s keeping his wife at a distance.  He’s not praying as before, and has skipped his prayer meetings with other men for the past two weeks.  Today has also been tiring.  He hasn’t stopped from the moment he left home.  As an optometrist, he had to tell two patients that they would likely lose their sight, and one got very angry with him, saying that she would find another doctor.  Because of all this, Mark left the family dinner as soon as he decently could (Fr. Timothy Gallagher, Discernment of Spirits in Marriage, 45-47).

Mark’s life is pretty much like all of ours.  Maybe some of you are feeling the same way.  (I actually hope you are, otherwise this homily won’t be very good. 🙂) 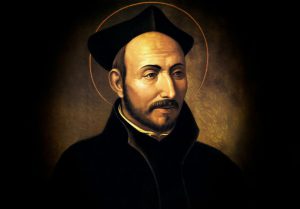 St. Ignatius of Loyola has 14 rules of discernment in his first week of the Spiritual Exercises.  These rules are guidelines about how God and the devil work on the soul, and how we should respond.  They are absolutely fascinating, universally practical, and have made a huge difference for millions of disciples.  Today I’m going to review Rules Four and Five with you.

Our jumping-off point for Rule Four is what Jesus says today: “Be on guard so that your hearts are not weighed down with dissipation and drunkenness and the worries of this life, and that day catch you unexpectedly, like a trap…  Be alert at all times, praying that you may have strength to escape all these things that will take place, and to stand before the Son of Man” (Lk 21:34-36).  What is Jesus telling us here?  There are situations and experiences in life that will distract us from Him.

He gives three examples.  ‘Dissipation’ literally means ‘drinking-bout,’ so this refers to partying, but broadly, to a life far away from God.  ‘Drunkenness,’ we’ve talked about before, is grave matter for sin.  Why?  Because to choose to drink to the point of drunkenness means to choose freely to lose our ability to reason and thus our ability to love.  To do so knowingly and consciously is to separate ourselves from God.  Drinking is not sinful, but freely choosing to do something that directly causes us to lose our ability to reason is.  And ‘worries of this life’ are usually minor and not even sinful, but are perhaps the greatest spiritual distraction we have.

What does Jesus tell us to do?  ‘Be on guard so that your hearts are not weighed down…  Be alert at all times.’  Think about this: If two men are both having a difficult spiritual month, both are worried about finances, both have lost peace, both are struggling with pornography, how much of an advantage would one man have if he recognized that he is being tempted by the devil?

The Fourth Rule of Discernment is about spiritual desolation, which includes “darkness of soul, disturbance in it, movement to low and earthly things, disquiet from various agitations and temptations, moving to lack of confidence, without hope, without love, finding oneself totally slothful, tepid, sad, and as if separated from one’s Creator and Lord.”

A few things to keep in mind:

2)  Desolation is quite often in the area of feelings—this is important, and we should pay attention to them, because feelings can tell us things that our reason doesn’t detect, such as when we feel unsafe, humiliated, etc.  However, sometimes our feelings can be wrong.  So, we need to verify if they’re telling us the truth.  For instance, someone will say to me, “Man, there are people at work who are so arrogant.  I just wanted to explode today.  I feel so far from God.”  I’ll ask, “So, what did you do?”  “I stayed calm.  I stood up to them, but they didn’t listen.”  “So you are close to God.  The fact that you were calm and strong, and didn’t sin, are signs He’s with you.”  St. Ignatius specifically tells us that we feel ‘as if separated from one’s Creator and Lord,’ but we’re not.  The feeling is not indicative of reality.  Usually we equate a good week with being close to God, but that’s not necessarily the case.  Your mother could be in the hospital, you could be sick yourself, you might even be in pain, but do you trust in Jesus?  Yes.  Do you have hope in Him, love Him?  Are you trying to be like Him?  If so, then you’re close to Him and He’s super close to you!

On the other hand, let’s say you’re having a great month: work has been easy, you’ve been going to great restaurants, and you’ve watched some awesome shows on Netflix.  I ask, “How’s your prayer this past month?”  “Okay.”  “Have you done anything spiritual this past month?”  “No.”  “Do you have any desire to do anything spiritual?”  “No.”  “Then it sounds like you’re in spiritual desolation, because your heart’s far from Jesus.”

Last week, when we did the Christ the King Challenge, I want to affirm those of you who chose not to raise your hands, because you chose to answer honestly!  And just be careful of any desolations that make you feel like you’re unworthy or discouraged.

The gift of the Fourth Rule of Discernment is that once you recognize what’s happening to you, what you’re experiencing loses power over you!!!  That’s why Jesus says, ‘Be on guard… Be alert.’  Recognize the state of your heart and mind.

The jumping-off point for Rule Five is when Jesus says, “Now when these things begin to take place, stand up and raise your heads, because your redemption is drawing near” (Lk 21:28).  When you’re in spiritual desolation, hold firm, and stay like a spiritual rock.  Rule Five says this: “En tiempo de desolación nunca hacer cambio, sino estar firme y constante en los propósitos y determinación en que estaba el día anterior a esa desolación”.  For those who don’t speak Spanish, let me translate: “In time of desolation, don’t do anything stupid.  Don’t be a mucho fool.”  A more literal translation is, “In time of desolation, never make a change, but be firm and constant in the proposals and determination in which one was the day preceding such desolation.”

When Mark is having a heavy month, he shouldn’t skip his prayer meeting, and shouldn’t keep his wife at a distance.  On the contrary, he’s wise to continue going to the prayer meetings, he’s wise not to skip the family dinner.  Another example: When we’ve been doing really well spiritually and have been going to Confession, and then commit a mortal sin, should we avoid or go to Confession?  Go.  You know how many people give up on Jesus when they hear about scandals in the Church?  They hear about residential school involvement, sexual abuse by priests, etc.  They get so angry that they stop going to Mass.  They’re violating Rule Five.  Because, when we feel like God is far, don’t change your spiritual resolutions.  Don’t stop going to Alpha, Faith Studies, etc.

Now this does not apply to non-spiritual desolation.  When you’re physically tired, make a change and go sleep!  But don’t miss Mass.  When you’ve had a busy day and your kids need you one night, but you’re very much in love with God, then you can skip Alpha.  If you’re in an unhealthy relationship, make a change, protect yourself, and get help.

A few weeks ago, when I was praying over today’s Readings, I thought about cancelling our annual 11:02 Prayer Initiative.  Since 2018, we’ve always written down the names of those we’d like to come to know Jesus, and put those names under the altar, but this year, I wondered if we should.  I felt like we’re not ready, that we would fail, that, if we’re going to pray for people, some of us will not invite them to Alpha.  Most of all, I had no strong hope in God.  Was I in desolation?  Yes, both non-spiritual and spiritual.  The key indicator that I was in spiritual desolation was that my trust in God was weak.  What does St. Ignatius say about that?  Never make a change.  That’s when I knew we have to do the 11:02 Prayer. 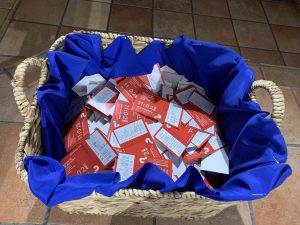 The 11:02 Prayer is based on Luke, chapter 11, verse 2, where the disciples ask Jesus how to pray, and He teaches them the Our Father.  We write down the names of people we love, set an alarm on our phones at 11:02 a.m. or p.m., and pray for them then.  In your pews are the cards.  Start thinking about it now.  It’s people in our lives with whom we have a friendship.  Ask the Lord to reveal for whom we should pray.  We write down the same names on both halves, one of which we place underneath the altar.  This is based on the book of Revelation, where the souls of martyrs are underneath the altar in heaven, and it’s a sign of bringing our loved ones close to Jesus’ sacrifice at Mass.  The second half of the cards we take home, and pray for people daily at 11:02 a.m. or p.m. depending on what’s good for you.  And notice the prayer suggestion on the back of the card, please.

We’ll take a minute after the homily to fill out the cards.  This year, when we come up for Communion, please drop off the cards in the basket in the centre aisle.  This will also give us more time for the rest of Mass to think about people for whom God wants us to pray.

Fr. Timothy Gallagher, who writes extensively on these Rules of Discernment, says, “If you were to forget everything else we say in this presentation, I beg of you never to forget rule 5.  It will get you safely through almost any darkness you may encounter in life.”  If we can recognize and deflect desolation, we’ll be able to ‘stand up and raise your heads’ when Jesus comes!