Our opening question is: When will the darkness pass?  In the book Discernment of Spirits in Marriage, which we’re using as an aid, Anne sees a pattern: When we’re in dark times, it feels like it’s “going to continue, all day, all week, maybe even forever if the darkness is heavy enough.  Then you find that it doesn’t.  It ends sooner, usually a lot sooner than the darkness wants you to believe” (80-81).

So, here’s her insight: If you believe that what you’re going through is going to go on and on, you’ll get very discouraged, and possibly give up.  She shares this with her husband, and he realizes that, if he remembers this point, then it’s a lot easier to get through desolation.

The key word today is patience.  The First Reading and Gospel are all about patiently waiting for something good.  St. John the Baptist says, “Prepare the way of the Lord…  Every valley shall be filled, and every mountain and hill shall be made low, and the crooked shall be made straight, and the rough ways made smooth; and all flesh shall see the salvation of God” (Lk 3:4-5).  St. John’s referring to the coming of a king, and to the preparation of roads for a royal procession.  Jesus didn’t come immediately to His people.  They had to wait.  In a minute, we’ll talk about why we have to wait for consolation.

But for now, we have to reflect on our own impatience.  We’re so used to getting everything we want instantly.  However, the Jewish people waited over a thousand years for Jesus.  And keep in mind that, for certain things, we may never see the solution in our lifetime.

Yet when it comes to consolation, St. Ignatius writes in Rule Eight of the Discernment of Spirits: “Let one who is in desolation work to be in patience, which is contrary to the vexations that come to him, and let him think that he will soon be consoled, diligently using the means against such desolation, as is said in the sixth rule.”  What does desolation do?  It tells us to give up because it’s going to go on forever.  But St. Ignatius is telling us to do the opposite: If our feelings tell us that the desolation will never end, then think!  Use your mind, which tells us that consolation will soon come!  We’ll talk about the sixth rule next week, but, given our Gospel for today about waiting, I decided to focus on Rule Eight.

When we face our desolation head-on, and surrender the problem and ourselves to God the Father, that’s how we move forward, and that itself is a consolation.

You know, whenever I see some of you struggle spiritually, I want to rush in and help you get out of it right away.  Then I realized that I’m acting like parents who never want to let their children suffer; they protect their children from all failure, disappointment, and suffering, but then their children grow up weak and can’t handle adversity.  I’m slowly learning that spiritual growth means allowing people to go through desolation as long as God wants it, so that they grow stronger.

And that leads to Rule Nine, which gives us three reasons why God allows desolation.  First, it’s because we’re slothful, spiritually lazy or negligent.  This may be a hard pill to swallow, but it’s a reasonable one.  If we skip our prayer time with Jesus, don’t do spiritual reading, etc., then what do we expect?

If you’re in darkness right now, please think about making the following promise to God, and this isn’t something you can make lightly, but something you have to ponder: “Lord, I see what You’re doing in my life with all this darkness.  So, if You never give me consolation ever again, even for the rest of my life, I’ll always love You, and always obey Your commandments.”  I made that promise to God when I was in the seminary.  I think that’s one reason why my life is so blessed.  It was a gift from God that I was able to make that choice, but it’s a gift that God offers all of us.  However, we need to receive the gift and make the promise ourselves.  Isn’t this promise what marriage is about?  “For better, for worse, for richer, for poorer, in sickness and in health…”  God wants to marry us.  When we’re in desolation, He wants to know if we’ll make this vow.

St. Paul writes today, “God is my witness, how I long for all of you with the compassion of Christ Jesus.  And this is my prayer, that your love may overflow more and more… so that in the day of Christ you may be pure and blameless” (Phil 1:8-10).  St. Paul wants the Philippian Christians to be spiritually mature.  And do you know from where he writes this letter?  Prison.  Even though he’s suffering, his letter to the Philippians is perhaps his most positive and joyful!  He’s living the wisdom of Rule Eight by being patient, and understands the truths of Rule Nine, why God’s allowing him to suffer.

This is Venerable Xavier Nguyen Van Thuan, a Vietnamese cardinal who died in 2002. 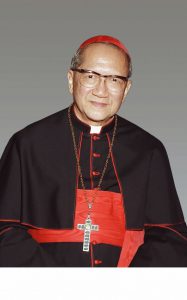 In 1975, the communists arrested him and put him in prison for 13 years, 9 of which were in solitary confinement.  He celebrated Mass secretly in prison, which gave him strength to be patient, to love, and to forgive the guards.

Please watch this one-minute video where he describes in Italian how he endured his suffering.  The first thing he says is that he patiently did what he could.  His love of the guards led them to help create the cross he wore for the rest of his life.  And notice how he looks to God’s future consolation, which always comes.