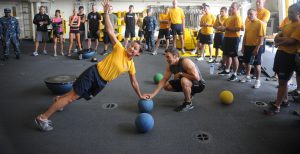 Why do some people never start exercising when they know they should? They never change their diet, clean their house, go to the doctor for that check-up, or start studying for that test? One answer is because they get overwhelmed just by the idea of it. The idea of exercising regularly is so intimidating that they just shut down and don’t start. Going to the doctor? They think: “Well, what if he tells me I have a problem, then I have to go for more tests, then I may have to change my diet, start exercising, whoa, too much!”

What life change are we avoiding? Which idea of change just overwhelms us?

Many of Jesus’ teachings require so much change that they intimidate and so we avoid them. Two weeks ago, we talked about loving God more than our family, and for many people, this is just too hard.

Today we have the amazing image of the Good Samaritan, who sacrifices so much for someone he doesn’t even know. When the Good Samaritan goes over to help the wounded man, he risks his own life, because he may be ambushed as well. He inconveniences himself: he takes time out of his day to help someone, spends his oil and wine on him, loses the rest of his day taking him to an inn, gives up two days’ wages and offers to pay even more. His wife and family were probably worried sick about him because he didn’t come home on time. And perhaps she wouldn’t have understood that he spent money on stranger, money that she thinks is for the family.

Jesus is commanding us to love like this, because this is how He loves. But how many of us are willing to give up the rest of the day helping a stranger, and lose time from our family and work? If, for example, we make $80 a day, would we be willing to give $160 to a stranger in legitimate need?

We are called to get to this level of love. But this can be overwhelming. So I’d like to suggest something Jesus did with His own disciples, that is, He trained them slowly, step by step. Sometimes He challenged them with more they could handle, because that’s also what a good teacher does. But most of the time, He challenged them with steps they could handle. The first reading today says, “Surely this commandment that I am commanding you today is not too hard for you, nor is it too far away… No, the word is very near to you; it is in your mouth and in your heart for you to observe” (Dt 30:11,14).

This is today’s challenge, and it comes in two parts: 1) Jesus is asking us to grow by one step. We don’t have get to the level of love of the Good Samaritan all at once, but just grow one step closer—that’s not overwhelming, is it?

Some of us have read how psychologists used the idea of gentle, incremental change to help people lose weight. Certain people were simply overwhelmed by the idea of exercise and so never even started. So the psychologists suggested, in one case, that someone just stand on the treadmill one minute each morning. That’s right, no exercise, just standing. In another case, everyday, while watching TV, a person was asked to stand up for a minute in front of the TV and march in place (Matthew Kelly, The Four Signs of a Dynamic Catholic, 27). When the people heard this, they felt, “I can do that.” And so continued their progress. They got a step closer to their goal!

We mentioned a month ago that we’re asking everyone to consider spending 15 minutes a week in adoration of the Blessed Sacrament starting next year. Most parishes ask for one hour a week, so some people asked, “Why 15 minutes?” It’s to prevent people from being overwhelmed. For most people, one hour every week in prayer is too much: we don’t know what to do for an hour, it’s too long to be in silence, and it’s too demanding on our schedules. But, “15 minutes? I can do that.” If we can do more, wonderful!

2) Once we’ve decided to take a step in the right direction, how big should it be? For many of us, we may take that step, but it won’t bear fruit because it’s too easy. So, here’s the second part: When I was 16 years old, we had a visiting priest come to our parish and he said something that I never forgot, but which changed my life, and put me on the path of generosity and becoming more like the Good Samaritan. He was talking about giving in the collection and asked the question of how much we should put in. And he said: “Whatever makes us uncomfortable.” When we’re uncomfortable, it’s a sign that we’re growing and that we’re challenging ourselves and that we’re going outside of our comfort zone. By nature, we all tend to stay within our comfort zones. But, if we do, we’ll never reach the level of the love of the Good Samaritan. That visiting priest planted a seed in me that slowly grew. I started donating to the Church some of the money I received from birthday and Christmas gifts, and I slowly grew in generosity.

This wisdom applies to everything we do in life. When it comes to building muscle, the only way to keep growing is to lift heavier weights or do more repetitions. We don’t double the weight all at once, but we add on just a bit more. How much more? Enough to make us uncomfortable.

It says on the Examination of Conscience, “Did I fail to do penance on Fridays?” What does this mean? Because Jesus sacrificed everything for us on Friday, the Church has always asked us to sacrifice something for Him on the day He died. For most people, fasting every Friday is too much. So what little sacrifice could we do that would make us a bit uncomfortable? I finally verified that the Canadian bishops have said we must still abstain from meat every Friday. However, if we do eat meat, they say we must then do a substitute penance. So, if we go to McDonald’s on Friday, let’s eat the Filet-O-Fish. (In the 1960s, the owner of McDonald’s was losing Catholic customers during Lent because we wouldn’t eat burgers. So he came up with the idea of the Filet-O-Fish, and now 25% of the Filet-O-Fish sales are during Lent.). But, if this is easy for us, how about no fries, skipping a meal, no coffee, no social media, praying a Rosary, morning Mass, or spiritual reading?

Angus Reid did a survey last year of religion in Canada and one thing he learned was this: “The single most important factor which determines whether an adult will pray or not is their experience as a child. When I first looked at the data on this I admit to being awestruck… If you didn’t pray as a child the odds that you would be a frequent prayer today is 6%. On the other hand if you prayed as a child the odds that you will pray as an adult are 93%. …I was left with the inescapable conclusion that the actions taken in childhood – with parents, caregivers and yes, schools; place an indelible mark of faith which lasts a lifetime.”

So we should find what’s feasible and challenging for our children, and help them do it. For most kids, praying the Rosary is too much. But what about a decade (that’s less than 5 minutes), what about grace before and after meals? What about what we suggested in March? We put a crucifix on our pillow and “every night, we cannot take that crucifix off our pillow and go to sleep until we’ve reviewed our day in one minute of silent prayer and then said the act of contrition. When we wake up, we can’t put the crucifix on the pillow until we’ve made our morning offering, taking one minute to offer the upcoming day’s activities to the Father.”

The people I know who are the most generous with their time have told me their parents instilled in them a spirit of service. Let’s also teach our children to be generous. If they’re old enough to receive an allowance, they’re old enough to give. If we help our children pray, serve and give when they’re young, the time will come when they meet someone in desperate need and they’ll be ready to respond.

So what change is God calling you and me to make today or this week? Even the most gentle step forward is already a victory. With God’s grace, we’ll take one step forward, and one that’s a bit uncomfortable.