Which of the following two images of God is more correct?  1) Once, during dinner, I told a friend that Catholics don’t eat meat on Fridays.  He found that interesting and said that, according to his religion, he really wasn’t supposed to be eating the food in front of him.  So, I asked him, “So why are you eating it right now?”  “I think God understands that I really like this food.”  I smiled because it was one of the worst excuses I had ever heard!  His image of God is a push-over, someone who doesn’t care about what we do.

2) We talked about Theresa Bonopartis last year.  Her family put pressure on her to have an abortion when she was 18.  Afterwards, she stayed awake asking God over and over again to forgive her.  When she was pregnant with her second child, she thought God would punish her by making her child sick.  Later, she grew in her relationship with God but still kept away from the Church.  Her image of God is of someone whose forgiveness is limited, whose love may stop at a certain point.

Whose image is more correct?  The answer is: Neither.  Neither really knows who God actually is.  We all have, to a certain extent, a distorted image of God insofar as we don’t know how good He truly is!

How do we know the real God?  Look at today’s readings.  Jesus is both just and merciful.  In the Gospel, it’s Easter Sunday, the day of the Resurrection, and He appears to His friends who had deserted Him.  Realize how great their sin is.  He says to them, “Your punishment will be great.”  No, that’s not what He says! He says, twice, “Peace be with you” (Jn 20:19-21).  Wow!  He’s a God of forgiveness!  Then He commands them to carry out the ministry of reconciliation: “If you forgive the sins of any, they are forgiven them; if you retain the sins of any, they are retained” (Jn 20:23).  Here, He gives them the power to hear confessions, the power to forgive or withhold forgiveness.

However, He’s not a wishy-washy God.  Many people say, “God loves you just the way you are.”  That’s true, but God loves you too much to let you stay the way you are.  The second reading tells us: “By this we know that we love the children of God, when we love God and obey his commandments.  For the love of God is this, that we obey his commandments” (1 Jn 5:2-3).  Yes, God is merciful and loves us.  Nevertheless, as we said on Jan. 1, Jesus didn’t come to abolish the law, but to fulfill it, and told us that everyone who keeps the commandments will be called greatest in the kingdom of heaven.

If someone ever says, “But God is a God of mercy,” we should say, “That’s true.  But He’s also a God of justice.”  Jesus taught us that the Good Samaritan was the one who actually helped his neighbour (Lk 10:30-37); God does care what we do.  Jesus tells us in Matthew 25, “Depart from me, you cursed, into the eternal fire prepared for the devil… for I was hungry and you gave me no food… I was a stranger and you did not welcome me… sick and in prison and you did not visit me” (vv. 41-43); we can deal with exceptions another time, but, for the moment, let’s just admit that the words of Jesus indicate that if we do not help those in need, we will go to hell.  Lastly, when we pray the Our Father, our prayer for forgiveness will only be heard if we meet a strict requirement, that we forgive other people (Cf. CCC 2838; Mt 18).

Perhaps the best way to explain that Jesus is a God of justice and mercy is with an image.  Today is the second Sunday of Easter, also known as Divine Mercy Sunday.  Divine Mercy refers to the mercy of God.  It was popularized by a Polish nun, St. Faustina Kowalska,  who lived from 1905-1938.  She had many visions of Jesus, Who asked her to paint an image of what she saw.

What do we see when we look at the image?  Do we see a wishy-washy Jesus or a punishing Jesus?

This is what we should see.  There are 8 parts to the image: 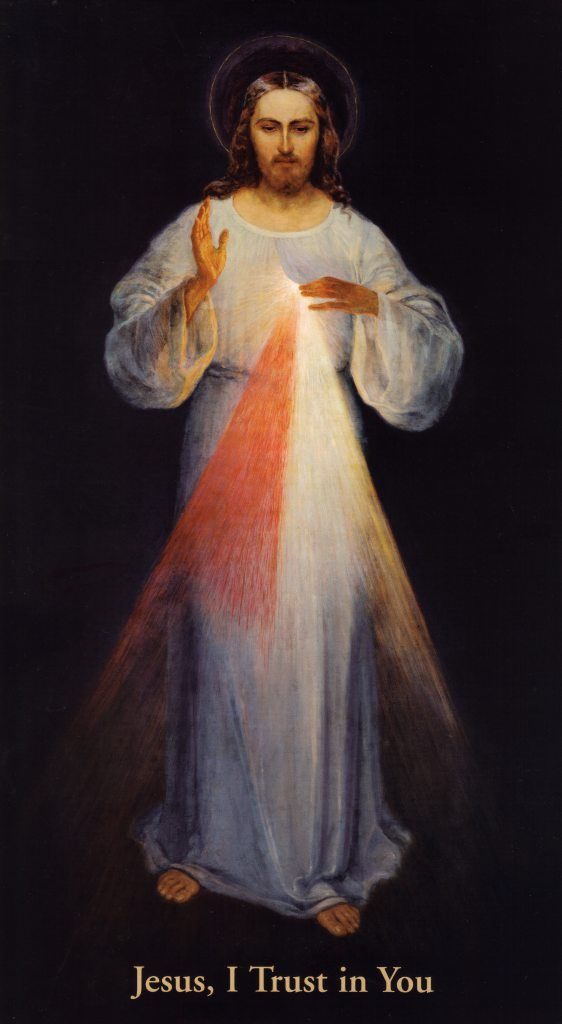 While the painting isn’t artistically that beautiful, and even St. Faustina cried when she saw what the artist painted, Jesus told her: “Not in the beauty of the color, nor of the brush lies the greatness of this image, but in My grace” (Diary, 313).  The grace of this image is that it communicates who Jesus really is.

I’ve noticed that people who love Divine Mercy have incredible confidence in God and know that every sin can be forgiven.  Because we’ve asked it many times before, we’re going to ask it again (and I want everyone to give a confident answer): Can every sin be forgiven?  Even the sin of abortion?  Yes.

However, I’ve never seen people who believe in Divine Mercy take advantage of God’s mercy; they would never say, “God loves me just the way I am,” and use it as an excuse to not change.  No, these people try to become like Jesus. 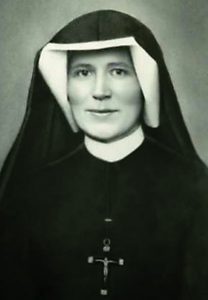 St. Faustina often prayed for the conversion of those who were dying.  She said, “God’s mercy sometimes touches the sinner at the last moment in a wondrous and mysterious way.  Outwardly, it seems as if everything were lost, but it is not so.  The soul, illuminated by a ray of God’s powerful final grace, turns to God in the last moment with such a power of love that, in an instant, it receives from God forgiveness of sin and punishment, while outwardly it shows no sign either of repentance or of contrition” (Harvey D. Egan, An Anthology of Christian Mysticism, 573).  However, she adds that, at the moment of death, some people still consciously reject this grace, which is tragic.

Yes, God’s mercy is infinite, but our opportunity to accept salvation only exists in this life.  Once we’re dead, there are no more chances.  If there were, people would take advantage of God’s mercy, do whatever they please, knowing that they could always ask forgiveness later—that’s not good for us.  God gives us a finite amount of time to choose to accept His love because that’s salutary for us.

Jesus said to the apostles that they could forgive sins or retain them.  Can you think of a time when Jesus retained someone’s sins?  Here’s one occasion: In John 9, “Jesus said, ‘For judgment I came into this world, that those who do not see may see, and that those who see may become blind.’  Some of the Pharisees near Him heard this, and they said to Him, ‘Are we also blind?’  Jesus said to them, ‘If you were blind, you would have no guilt; but now that you say, “We see,” your guilt remains’” (vv. 39-41).  They’re not forgiven because they don’t want forgiveness; they refuse to admit their wrong-doing.

Firstly, Fr. Donald Haggerty taught us in the seminary that, if a man, for example, comes to confession and confesses beating his wife, but then says, “Well, Father, she deserved it, she had it coming.”  Is he really sorry?  The priest then has to find out if he’s really sorry, and if the man keeps on arguing, justifying it and making excuses, then he’s not truly sorry and doesn’t actually want forgiveness. And so the priest should not absolve him.

Secondly, if someone confesses a sin but basically hints that it’s going 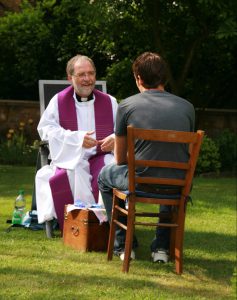 to happen again, and they’re not even trying, is that person really sorry?  Again, the priest has to find out if the person is going to take firm steps to try and stop this, and, if it’s clear that the person won’t even try, then he’s not really sorry and doesn’t want forgiveness.

For us, all we should do is try our best truly to hate our sins and make efforts not to commit them again.  Be sensitive, but not hyper-sensitive.  Some very good people often wonder if they’re truly sorry for their sins because they keep on doing them.  But it’s very obvious by the way they talk that they’re not happy about their sins, even though they keep on coming back.  To these people we say, “We know you’re sorry.  That’s why you’re here.  You’re falling because of weakness.  Don’t be afraid of coming back.  Yet, at the same time, make a stronger commitment to fight this and take more practical steps to overcome it.”

Jesus says today, “As the Father has sent me, so I send you” (Jn 20:21).  Just as He’s the image of the Father, we are supposed to be images of Jesus.  When people look at us, what do they see?  Do they see a hand raised in courtesy (as during the sign of peace) or reluctance to extend it?  When they look at our eyes, do they see love or disinterest?  Do we go looking for people, or stay in our own little world?

This is what happened to Theresa Bonopartis.  Her journey to forgiveness and healing was a long one.  After years of spiritual growth, and even after Confession, she wrote this, “One night I felt depressed and suicidal again, but despite these feelings, I also somehow felt a deep trust in God…  I closed myself in the bathroom, crouched on the floor, and repeated over and over ‘Jesus, I trust in You.’  I don’t know how many hours I did this, but well into the night I had an experience that changed my life.  I experienced being on the Cross with Christ.  But instead of experiencing suffering, I felt love so intense that it was capable of taking away that pain.  I felt His love wash away my sin and I knew my healing was complete.  I have never since felt the despair of abortion, only the profound love and forgiveness Christ gave me.  I’ve watched my life be transformed, miraculously, as I’ve been privileged to help countless women and men suffering from abortion’s aftermath…

Before my mother died, I learned that my abortion had caused her great suffering, although she had never told me.  One day when we were watching TV, abortion was mentioned.  She said, ‘Well, sometimes it’s all right to have an abortion.’  I said, ‘Mom, it is never all right.’  God gave us this moment of grace.  She told me that my abortion was her sin and that she would take it to the grave with her.  I was able to comfort her, telling her that we both bore responsibility for it.  I told her that I forgave her and asked her to forgive me.  After that my mother went to Confession to the same priest I had seen for direction, and she felt that her terrible burden was lifted.”