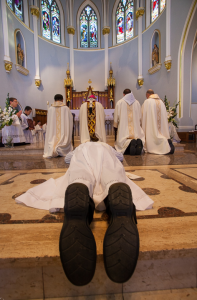 Priests are supposed to live a life of poverty, chastity, and obedience.  For a diocesan priest like me, poverty means a frugal life like Jesus’; chastity means marriage to God, not to a woman; obedience means following God’s will in whatever the bishop asks me to do.  Brothers and sisters, dear guests, could I ask you: If God called you to live these three, which would be the hardest?

For me, it was celibacy.  When I was 18, the idea of not being married was scary: “I want what everyone else has.  How can I not get married?”  I wanted to serve God with my whole life, but celibacy seemed too much, so I wrestled with it even in the seminary.  At the end of first year, a number of guys rightly discerned that God wasn’t calling them to the priesthood, so I went to them and tried to find out why they were leaving, hoping that whatever reason they had I might have, too!  And so I started coming up with elaborate ideas about how to leave. At one point, I called a good high school friend and said, “I think at the end of this year, I might go to UBC so I can study secular philosophy and know what people 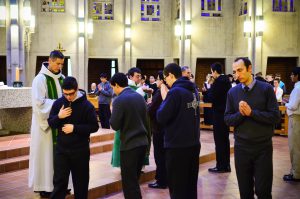 are learning, so that I can better serve them when I become a priest; and then I’ll come back to the seminary.”  He was an atheist, so I thought he wouldn’t spot my spiritual wimpiness.  You know what he said?  “Hmm… I thought you were committed.”  Argh!!!

The fundamental human problem is that sometimes we’re afraid of what God will ask of us or will do in our lives.  We fear He’ll take away our happiness, impose limits on us, and take away our freedom.  Many people are called to follow God as a priest, deacon, or sister but fear stops them.  When God calls us to pray or serve more in the parish, it feels as if it’s a burden.  When we look at the yellow Examination of Conscience pamphlet, some of those questions might make us uneasy, and our minds jump to the conclusion that this will make our life harder. 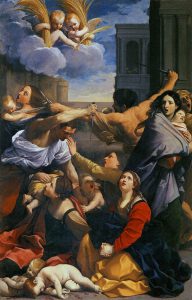 The Massacre of the Innocents by Guido Reni

In the Gospel, Herod fears Jesus.  When the wise men come from the East asking, “Where is the child who has been born king of the Jews?” (Mt 2:2) it says, “When King Herod heard this, he was frightened, and all Jerusalem with him” (Mt 2:3).  Why would he be frightened?  Jesus is just a baby.  It’s because Jesus is a king and Herod believed Jesus would take away his power.  And why is all of Jerusalem frightened, too?  Because they knew Herod (Pope Benedict, Jesus of Nazareth: The Infancy Narratives, 113): He had already killed two of his children and was soon to kill his oldest because he feared they would take over his kingdom (The International Bible Commentary, ed. William R. Farmer, 1262).

Yet, one Church father says, “If Herod would have faith in the child, he himself would reign in peace in this life and for ever in the life to come…  The child does not come to drive you out, but to conquer the devil.  You imagine that if you accomplish your desire to kill the child you can prolong your own life, though you are seeking to kill Life himself” (St. Quodvultdeus, Liturgy of the Hours, Holy Innocents).

If only Herod knew what Pope Benedict famously said, and this is the main point for today, “[Jesus] takes nothing away, and he gives you everything.” God doesn’t take away anything ultimately good for us.  He’s not our rival; He’s not here to hurt us.  He’s on our side!

Now it is true that He’ll take away sin in our lives.  He’ll take away our selfishness, narcissism, cowardice, laziness, greed, things that aren’t good for us.  He’ll take them away in order to give us humility, love for others, courage, discipline, generosity.

Do we have this image of God?  When Adam and Eve were in the garden and God told them not to eat from the tree of the knowledge of good and evil, they disobeyed because they thought God was against them.  But God was just trying to prevent them from falling into the trap of trying to determine what’s right and wrong.  Our job is to recognize what’s right and wrong, not determine it. 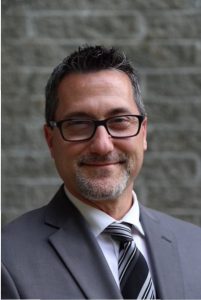 Brett Powell, whom I mentioned at Christmas, explains it this way: Imagine he’s in the backyard of his home in Coquitlam playing with one of his eight children, and says to him, “You can play anywhere in the backyard, but don’t go into the front (which faces the very busy Mariner Way), because, if you do, you could die.”  They start playing, then Brett has to go inside.  When he comes back out, his son’s missing.  He says, “Where are you?”  Then he runs out into the front and sees some cars stopped and the body of his son on the ground, and says, “Why did you do this?”

Those two questions, “Where are you?” (Gen 3:8), and, “Why have you done this?”(Gen 3:13) are the words of God the Father in Genesis, and they were said with concern, out of love.  That’s what Jesus is reminding us today: Whenever He asks or challenges us to do something, it’s because He loves us.

We said last week that our focus for this winter season is on the Eucharist, culminating in the opening of our chapel on March 24, 2019.  After considerable prayer and keeping in mind our vision to be centered on the Eucharist, we discerned this goal: that each of us has a Eucharistic heart.  A Eucharistic heart is one that recognizes Jesus in the host, under the appearance of bread; it’s one that’s drawn to Him in its joys and sorrows; it’s one that wants to spend time with Him in the tabernacle.  We want to invite everyone to express this heart in one concrete goal: that each of us spends 15 minutes a week with Jesus in the Eucharist.

This will be a game changer for our community, meaning 1060 of us will be close to the heart of Jesus and that will help our families and our community. 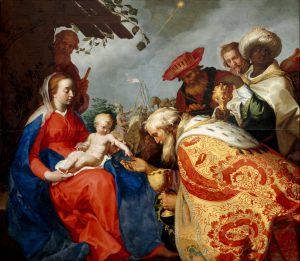 The Adoration of the Magi by Abraham Bloemaert

Celibacy was the hardest promise for me to make, but it’s my favourite because it allows me to love God entirely.  I never would have believed that I’d be this happy.  But my fears slowly decreased through lots of time with the Eucharist! 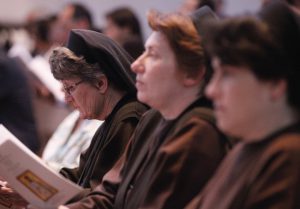 Franciscan Sisters of the Eucharist

And I’m so happy that in February one of our parishioners, Natalie Yuen, will be starting her discernment with the Franciscan Sisters of the Eucharist.  Even though it’s hard, she knows God is calling her to something better!

Several of us know New York Time’s best-selling author, Matthew Kelly.  However, many don’t know that he works four days a month as a business consultant, making enough money so that he can spend the rest of the month doing something more important and life-giving, what he truly loves, running Dynamic Catholic, a huge organization dedicated to reenergizing the Church.  Prioritizing God over his career started with something simple: 10 minutes a day of prayer in a church.  He couldn’t be bothered doing it at first, but once he started, he wondered how he ever lived without it.  Since then, he’s spent his whole adult life encouraging people to spend 10 minutes a day with Jesus in the Eucharist, because it’s not a burden, but a gift!  God takes nothing away, but gives us everything.