In my experience, here are the four most common stumbling blocks to prayer: 1) We don’t know how to pray.  2) We run out of things to say.  Dr. Tim Gray shares a story of how, when he was a teenager, he could pray on retreat and at the youth group, but, on his own, he didn’t know what to do.  He wanted to hear God speak, but heard nothing.  He would ask God to help him with this or that, but, subsequently, he had nothing left to say.  3) Many people have asked, “How do we know when we’re talking to God or when we’re talking to ourselves?”  4) We get nothing out of it.

The Gospel gives us an incredible teaching on prayer.  It starts: “Jesus was praying in a certain place, and after he had finished, one of his disciples said to him, ‘Lord, teach us to pray, as John taught his disciples’” (Lk 11:1).  More than any other Gospel, St. Luke records that “Jesus was praying”: Luke tells us that Jesus “would withdraw to deserted places and pray” (5:16).  In St. Matthew’s Gospel, Jesus gets baptized, and the Father’s voice is heard from heaven, while in St. Luke this happens while Jesus is  praying (3:21).  Before He chooses the 12 apostles, only St. Luke tells us that Jesus “went out to the mountain to pray; and he spent the night in prayer to God” (6:12).

Jesus prayed intensely and all the time.  As we said last week, many of us talk to God throughout the day, which is good, but not deep enough.  Jesus spent focused time in prayer, and that’s the way we’ll overcome our stumbling blocks.

The Gospel then says He was praying “in a certain place.”  Where we pray is important!  Remember how St. Luke says that Jesus went to the Mount of Olives, “as was his custom” (22:39)?  The Catechism says, “The choice of a favorable place is not a matter of indifference for true prayer” (2691). 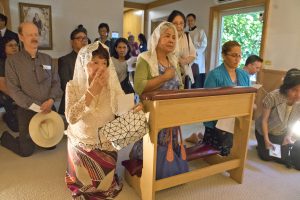 Fr. Lucio said that his ‘sweet spot’ for prayer was over there, on the left side of the church, next to the pillar.  When I was a teenager, my best place to pray at home was in between my bed and my brother’s, because the area was cozy and I could focus.  Fr. Pierre told me this week that the chapel is addictive, because of the environment and because people are praying, and that encourages him to pray.

That leads to the next part of the Gospel: “After [Jesus] had finished, one of his disciples said to him, ‘Lord, teach us to pray.’”  Jesus’ example of prayer was so inspiring that a disciple wants to learn!  Have you ever seen someone really pray?  They’re in a conversation, encountering another person.  It was said of St. Mother Teresa, “People were fascinated just watching Mother pray.  They would sit there and watching her be really drawn into this mystery” (Mother Teresa: Come Be My Light, 270, Kindle Edition).  This is what Jesus is doing for us today: He’s drawing us into His own prayer and saying: “Pray as I pray.”

Then He teaches us the Our Father.  St. Thomas Aquinas called the Our Father “the most perfect of prayers” (CCC 2763).  Why?  Because everything we can “rightly desire” is contained in it: Wanting God to be praised and glorified (hallowed be Thy name), that God be number one in our lives and in the whole world (Thy kingdom come), wanting not our own will to happen, but God’s plan (Thy will be done), asking for everything we need materially and spiritually (our daily bread), asking for forgiveness, asking for strength against temptation, and protection from Satan and all evil.  Everything we need and want is here.

But the Our Father also teaches us to ask for them in the right order.  Often we pray first for what we want, and then, if we remember, praise and bless God.  But the Our Father teaches us that the first three things for which we should ask are all centered around God: Hallowed be Thy name, Thy kingdom come, Thy will be done.  Only after that can we focus on ourselves.  As I told you before, always start with praise, because that gets us out of ourselves, and rescues us from our self-absorption, desolation, and discouragement.

All this answers the 1st stumbling block of how to pray: Like Jesus, make time for it, choose a good place, follow the pattern of the Our Father regarding what to ask, and the order to ask for it. 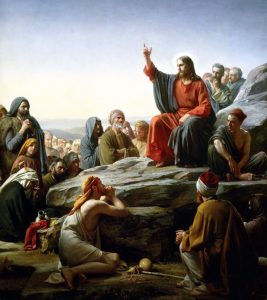 The Sermon on the Mount by Carl Bloch

Now, the 2nd stumbling block asks: What happens when we run out of things to say?  Then pray the Our Father the way the saints would pray it, by concentrating on the words.  St. Teresa of Avila would get stuck on the opening two words, “Our Father,” because there’s so much meaning there (St. Teresa of Avila, Vol. 2, 33).  Being able to call God “Father” is profoundly important.  In the first four chapters of St. Matthew’s Gospel, God is referred to as king, creator, savior, but never as father.  But, in the fifth chapter, the Sermon on the Mount, Jesus refers to God as Father 17 times, which is more than the entire Old Testament put together.  By the way, all these interesting facts are in FORMED.

Once we realize that God’s our Father, we relate to Him differently.  A friend of mine once told me about a Catholic man who is in full-time ministry.  He would always talk about “God” but never as “Father”—that says something.  That happens to a lot of Christians: They relate to God in His majesty, transcendence, and omnipotence, which is good and necessary, but never in His fatherhood, perhaps because they’ve never experienced being loved as a son or daughter.

By the way, addressing God by His name is why I’ll never allow the song “The Prayer” during a wedding!  Because it never even mentions God!  What’s the point of praying if we’re just addressing an unnamed, mysterious force?  It’s a nice song, but a bad prayer, because it doesn’t love God; it just asks Him to give us stuff.

Words are important.  Formulaic prayers like the Our Father are designed to be jumping off points: when we pray them, they’re supposed to touch our hearts and minds, so that we turn to God.  When I pray the words of consecration, my heart and mind are touched because of what the words mean, and I turn to the Father. 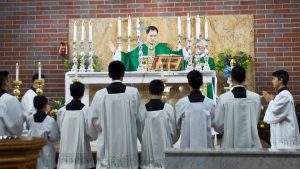 This is why I’ve said to bring a book to prayer always.  It will be a jumping off point.  You’ll never run out of things to say or fail to hear what God is saying.

The 3rd stumbling block is: How do you know when you’re talking to God or when you’re talking to yourself?  The answer is: awareness of the other person.  Just as you’re aware of someone with whom you’re communicating right now, when you pray and are aware of God, you’re praying.  It’s just like any other conversation.  Sometimes we start daydreaming in prayer when Jesus is talking to us (just as some of you are with me now), so, we need to pay attention again to Him.

Finally, the 4th stumbling block, what if we get nothing out of prayer?  I guarantee you that if we go into prayer sincerely trying to love God, then it’ll always be fruitful, even when we can’t feel it.

A wise person once said that, even if a pot has some cracks and can’t contain any water when it’s filled up, it’s still washed clean.  So, every time we turn to God in faith and love, and feel nothing, we’re still being purified.  It’s like eating vegetables: we feel nothing but still get nourished. 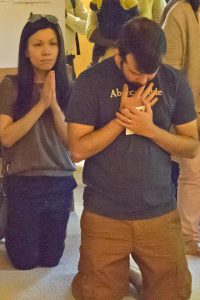 Today during Mass, if we notice someone really praying (I hope we’re all praying but sometimes we notice someone who’s more advanced in love), let that person’s prayer be a jumping off point for us, reminding us to pray better, just as Jesus’ example inspired a disciple to want to learn to pray. 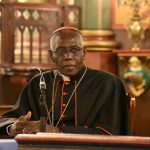 Last year, when Cardinal Robert Sarah visited Canada, before giving his talk in a church, he made an extended genuflection to the Blessed Sacrament, and many people said they found this prayer more moving than his talk.

Finally, a friend once told me that when he went to a famous shrine in Medjugorje, Bosnia and Herzegovina, he participated in a Mass where, for the first time in his life, everyone was praying!  He said it was so inspiring to be with other people who were praying that he started to pray!  They were clearly encountering God the Father, and were in a conversation with Him.

Let’s all do what they did: Pray like Jesus.