I want to tell you a story about Bryan.  In his mid-20s, he and his girlfriend were far from God and sexually active.  Bryan had such a strong addiction to pornography that he was no longer able to be physically intimate, and so he found a new girlfriend.  (He said that he had a fourth-degree black belt in selfishness.)  But his intimacy problems continued.  Eventually, he and his former girlfriend got back together and decided to marry in the Church because she was Catholic.

His wife then had a powerful experience of God’s love, and two years later, became a youth minister!  As for Bryan, he chose to become Catholic a year after the wedding.  His heart slowly grew, and he sought help.  He started going to Jake Khym, the wonderful Catholic counsellor who himself had overcome pornography, and through God’s grace, their work together, and with failure along the way, Bryan found freedom from his sexual sins.  His desire to help people grew so greatly that he left his work at Investors Group, studied at Trinity Western University, and is now a thriving counsellor helping people find freedom, hope, and healing.

St. Ignatius tells us in his 14th rule of discernment that the devil attacks our weaknesses, and Ignatius implies that, if we learn to identify and strengthen our weaknesses, the devil will no longer have power over us.  God’s grace is so powerful that He can even change weaknesses into strengths.  St. Francis de Sales had an anger problem, but became the saint of gentleness.  St. Augustine struggled with sexual desires and became the model of purity of heart.  And on Christmas, I’ll tell you about St. Therese’s overcoming her emotional problems and going on to be a saint of maturity and reasonableness.

We see in the First Reading this truth of God’s bringing strength out of weakness: “You, O Bethlehem of Ephrathah, who are one of the little clans of Judea, from you shall come forth for me one who is to rule in Israel” (Mic 5:2).  God Himself chose to come from a poor, essentially unknown town.  And in the Gospel, a virgin and an old woman both conceive children—these are great blessings coming from an unexpected source, and a source that was looked upon as a curse.

Could we ponder these five questions, please?  If we know our weaknesses, then we can strengthen them.  Ask yourself:

1) Is there some situation that frequently discourages me or strips me of spiritual energy?

2) Are there circumstances in which I often become afraid, worn out, or spiritually helpless?

3) Is there one recurring way in which I find myself spiritually weakened?

4) Does one thing seem to diminish most of my energy to love and serve others?

5) Is there something that habitually disheartens me in prayer, that causes me to doubt God’s love for me?

Know yourself!  Know your weaknesses!  Because the devil does.  St. Ignatius says in Rule 14 that the devil is like a leader of an enemy army that approaches a castle, pitches camp, and sends out scouts to examine the weak points in the defenses.

For some of us, our sexuality is where the devil attacks us, in our insecurities, loneliness, frustration.  For others, we’re really strong spiritually, but the devil attacks us through our emotions.  For others, he gets to us through our family.  For me, I never miss prayer, but he gets to me through overwork.  For some, our weakest point is our friendships: We follow whatever our friends do.  Finally, for some our physical health, that of others, or our worries about money always lead us to doubt God’s love.

Bryan and his wife are examples of how people overcome their sexual sins.  One person here has given me permission to share how her emotions have always ruled her, but, through self-examination, prayer, and formation, the devil can’t beat her there anymore.  People here who have had cancer, repeatedly used to doubt God’s love, but not anymore—their spiritual growth has been amazing!

An interesting point about St. Ignatius’ metaphor of the devil’s being the leader of an enemy army is that nothing is said about the strength of this army.  Actually, if the castle strengthens the weak point in the defense, then the enemy is powerless!  If we turn to God for help and strength, and fortify ourselves, then the devil is helpless before Him (183).  Again, if you want to know your weaknesses, go back to those five questions we mentioned at the beginning.

It’s our last week of Advent, and the Christmas season starts for us on Saturday.  We’re still praying for those on our 11:02 prayer card.  As we said last week, could we do one intentional act of love for them?  One possibility would be to share this good news with them that God can change their weaknesses into strengths, or at least, He can fortify them.  If we see people struggling with something in their life, give them a word of truth and hope!  Tell them that you’ll pray for them, that God will help them.  Seriously!  God can strengthen weak points!

In today’s Gospel, when our Mother Mary goes to visit St. Elizabeth, most of us have been taught that she went as an act of charity, that is, to help an elderly pregnant woman.  That’s possible, because the pregnancy might have been very difficult. 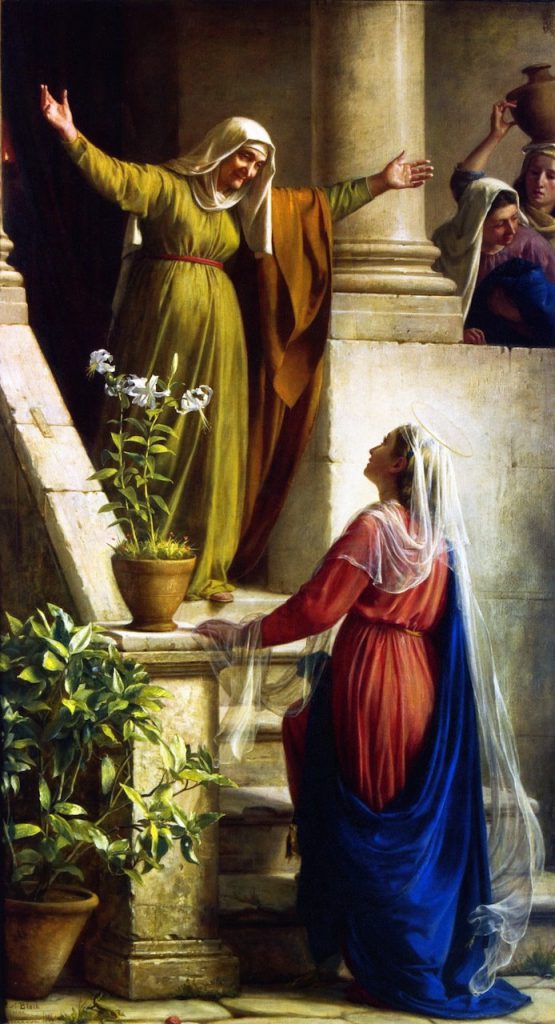 But it’s probably not the main reason.  Why?  Because the Gospel of St. Luke tells us, “Mary remained with her about three months, and returned to her home” (1:56).  Many people ask, ‘Why did she leave when St. Elizabeth gave birth and would have needed lots of help?’  Yes, it’s possible that she had to sort out her relationship with St. Joseph, but here’s one strong theological answer: Mary didn’t go to help with household chores and getting around the house.  She went to bring her child, Jesus, to St. Elizabeth and her baby, St. John.  There are seven words in today’s Gospel that are either exactly the same or very close to words used with King David, in the Old Testament, when he brought the ark of the covenant to Jerusalem (Pablo Gadenz, The Gospel of Luke in Catholic Commentary on Sacred Scripture, 49-50).

As Catholics, we believe that Jesus is the fulfillment of what the ark contained inside it, and that Mary is the new ark of the covenant.  And the three months Mary stayed with Elizabeth are the same length of time the ark stayed with Obed-Edom.  The point for us is that Mary made a decision to bring Jesus to her cousin and family (Ancient Christian Commentary on Sacred Scripture, Luke, 20).

Last point.  God’s ability to bring strength out of weakness and to fortify our weaknesses is so great that Bryan not only became a great Catholic counsellor, but eventually went on to help the priest who witnessed his wedding: me.  Last year, when I was struggling with my weaknesses (that is, weaknesses with stress and sleep, not sexual sins!), I turned to Bryan for help, and he is now so mature, so rooted in God, theology, and the psychological sciences that he was able to help me overcome a weakness.  Wow!  God is so powerful!  Please tell the people you love that God can strengthen their weaknesses, too.