Merry Christmas, everyone!  We’re going to talk about humility tonight, because Christmas celebrates Jesus’ humility.  He didn’t come to earth as a powerful, grown man, but as a baby.  Why?  To disarm us, to help us let down our guard.  Let’s consider three ideas:

First, where do we need to admit our need for help?  Where would we like to grow in the upcoming year?

Second, if we were humbler, how would our lives change?  Would we speak differently to our spouse, parents, or children?  And do we need to humble ourselves before anyone?

Third, would our lives be better if we didn’t blame others?  Humility generally takes responsibility for our lives, rather than blaming others.

The Gospel of Christmas night says, “While they were there, the time came for her to deliver her child.  And she gave birth to her firstborn son and wrapped him in swaddling clothes, and laid him in a manger, because there was no place for them in the inn” (Lk 2:). 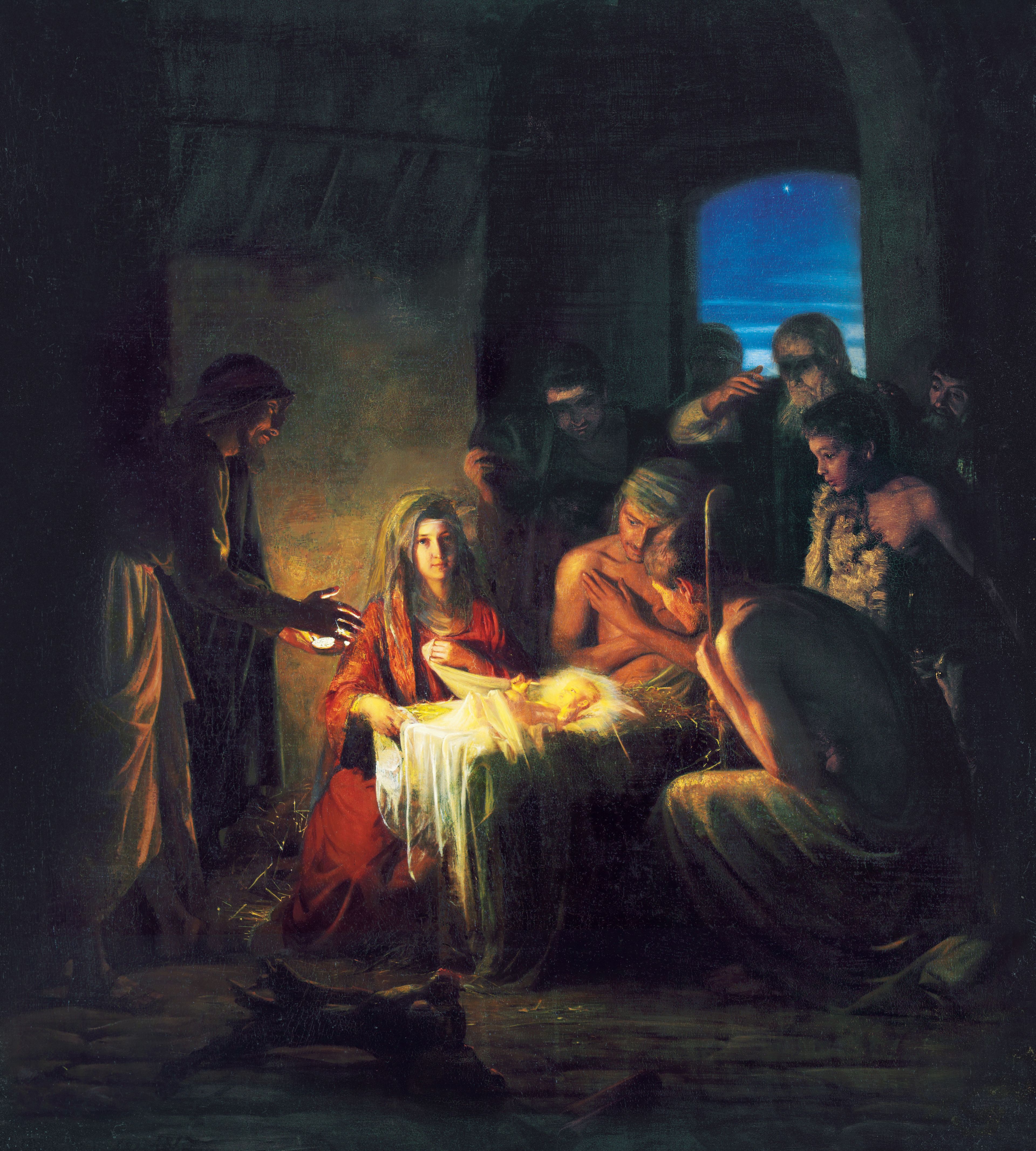 There’s humility in each of these phrases:

1) ‘While they were there’ refers to Bethlehem, a small, unknown, unimportant town.

2) ‘The time came for her to deliver her child,’ refers to Mary, a young, unaccomplished woman in worldly terms.

3) ‘And she gave birth to her firstborn son.’  Christmas is about God the Father’s reaching out to the human race.  He created us out of love and always guides us.  But we push Him away and don’t trust Him.  So, He humbles Himself and comes to us.

4) The Fathers of the Church interpret ‘swaddling clothes’ as prefiguring Jesus’ burial (Pope Benedict XVI, Jesus of Nazareth: The Infancy Narratives, 68).  So, at the moment of His birth, this child is destined to die to save us from our pride.

5) Finally, the Holy Child is in a ‘manger,’ and the family in a stable because ‘there was no place for them in the inn.’  These details symbolize that they’re already rejected by humanity.

So, we come back to our three ideas.

First, where do we need to admit our need for help?  How would we like to grow?  Pope Benedict XVI once referred to “God’s poverty” in reference to Jesus’ birth.  It’s hard to admit our poverty.  In July, I told you how Archbishop Miller asked me to go to counselling a year and a half ago!  Ouch!  I thought: My problems aren’t that bad.  And I didn’t want anyone to know.  But it’s been so good that I’ve been seeing the counsellor every three weeks since, and don’t plan on stopping, because I love growing!  At the end of this homily, I’ll show you a video explaining two programs of spiritual growth starting in two weeks.

Second, if we were humbler, how would our lives and relationships change?  Two humble people will always have a better relationship than two proud people, right?  You may remember the teaching of St. John of the Cross: “Where you find no love, put love, and you will draw out love” (Ralph Martin, The Fulfillment of All Desire, 63).  God the Father found no love among His creation, so, instead of giving up, He showed humility and sent His Son.  He put love into a broken relationship.  Is there any relationship that we want to be healed that would benefit from our putting love into it?

Fr. Robert Spitzer, S.J. once told a story about how he explained in Ireland the Parable of the Prodigal Son, and a former Protestant soldier/terrorist started crying when he heard the parable explained.  The fact that a son could treat his father so badly, insulting him, taking his money, leaving home, and wasting his life; and then that whole time, the father still waits for the son to come home; and when the son does come home, the father has no resentment or bitterness, but is just so happy that his son is safe and sound—that God the Father loves us like that moved a soldier to tears.  Six months later, during an Irish peace conference with Catholics, that soldier admitted that Fr. Spitzer, a Catholic priest, was the one who taught him Who God really is.  That humble admission sparked humility in the leader of the Catholic side of the violence, who then went up to the stage and shook his enemy’s hand.  So maybe it would help someone in our lives to be humble if we were humble first.

Third, how would our lives change if we didn’t blame others and took more responsibility for our situation?  One key theme of the Bible is that the Jewish people rarely blame God when things go badly.  Our Mother Mary and St. Joseph didn’t blame God the Father that they are rejected and poor.

So, on this holiest and most sacred day, could we try to avoid any unjust anger, resentment, or bitterness?  Could we try to improve our lives by changing ourselves?  With God’s help alone, we can improve our lives.  Just make what’s called an ‘honest prayer,’ which means speak to Jesus from your heart.  No poetry, no worrying about making a mistake; just speak what you’re feeling to the One Who loves you.

When she was 13 years old, Thérèse Martin was aware that she was extremely sensitive, immaturely crying when things bothered her.  She wanted to overcome this problem, but honestly felt helpless.  On Christmas night, she said that sweet infant Jesus worked a miracle on a small scale.  After midnight Mass, she was looking forward to opening presents, which for years had given her and her family joy.  But, this time, her father, Louis, seemed bothered, and on her way upstairs, she overheard him say, “Really all this is too babyish for a big girl like Thérèse, and I hope it is the last year it will happen.”  This hurt her deeply.  Seeing her starting to cry, her older sister, Céline, whispered to her not to go downstairs yet.  But Thérèse said Jesus changed her heart: She held back her tears, ran downstairs, and, though her heart was pounding, she chose to be happy.  Her father laughed, and Céline couldn’t believe how she had changed!  She had regained the strength of mind, and after this, she said her tears flowed neither easily nor often (St. Thérèse of Lisieux, Story of a Soul, Chapter V).  Most of us know that both Thérèse and her father, Louis, are saints.  St. Thérèse knew where she needed help and asked for it; she took responsibility for her oversensitiveness, and humbled herself that Christmas night.

My personal hope is that we can all lower our guard this Christmas.  Jesus Himself did that when He became a child.  I hope that, if our hearts soften, we can take one of these small humble steps, and receive the peace He came to bring us.

If you’d like some way to grow, the two programs we’re doing during the first week of January 2022 are Alpha and The Marriage Course.  Alpha is about the essentials of Christian faith.  We start with dinner, a 25-minute video, and then discussion, where you can speak what you really think with the people in your small group.  It’s open to everyone, no matter your faith background, there’s no commitment, and it’s either online or in person.  As for The Marriage Course, this is about improving your marriage, no matter where you are in the journey.  It’s done online, where the couples watch the video, and then have a private discussion afterwards.  Again, there’s no commitment, and it’s open to everyone, as you’ll see in the video that Ricky’s not Catholic, but Vivian is.  Merry Christmas!