Someone recently told me that I should be focusing more on spiritual matters, and less on political realities.  It’s true that the focus should be the spiritual, and, if you add everything I’ve said in the past year, you’ll find that it’s spiritually focused.  I also understand if people aren’t accustomed to moral comments about political realities.

But it’s also true that we must make moral comments on culture and politics, because these issues help or hurt people.  Isn’t it my job to talk about human rights?  Jesus Himself engaged the leaders of His day regarding the political and moral issues of His time.  Do you remember His upbraiding of the Pharisees?  That’s a political commentary.  That’s why the Church has this huge body of literature referred to as her social teaching.  Whatever touches the human person must be addressed, whether it’s sexuality, dignity, or political realities.  When the Pope, bishops, and priests make moral comments on politics, provided we’re applying Church teaching properly, then we’re doing our job.

Today is the fourth of four pro-life homilies, and, as we said, it’s supposed to be challenging.  Now I’m probably going to make the most politically incorrect statement for Vancouverites, and that is that President Trump, according to one count, advanced 16 hugely important pro-life initiatives, which helped saved thousands of preborn babies.

Here’s what I’m not going to say: that he’s a great person—I can’t judge that, because I don’t see everything.  I do believe he lies; he’s done many things that are immoral; he might be playing the Christian card to get votes; I think many of his comments are wrong.

But I also don’t believe everything the media says about him, because, as I pointed out last week, and after watching the moral climate of our culture for the past 20 years, I know the media spins and lies about many things, especially pro-life issues and politicians who make pro-life policies.  So I’d ask you to hear the argument I present.  And today, I’m going to show only one image of an aborted baby, so, parents, I will give you warning before I show it.

This homily is about seeing our pro-life convictions to their logical end.  Does abortion rip apart an innocent human being, as the pictures we showed three weeks ago demonstrate?  Is abortion killing by far the most people in the world?  If so, we should support politicians who stop this, and oppose those who encourage this.

One of the teachings of Jesus today is: “No good tree bears bad fruit, nor again does a bad tree bear good fruit; for each tree is known by its own fruit.  Figs are not gathered from thorns, nor are grapes picked from a bramble bush” (Lk 6:43-44).  Jesus is talking about good and bad people.  However, we know from other parts of the Bible that even good people sin, and we know that even bad people can do some good.  So, in every person, there’s a mixture of good and bad, and so the fruit they produce is a mixture of good and bad.  We need to assess each part fairly, and then judge the whole.  In evaluating our political leaders and their policies, it’s particularly difficult, because most politicians have a well-earned reputation for misleading people, mincing words, and telling people what they want to hear.

In St. Matthew’s Gospel, Jesus says, “Beware of false prophets, who come to you in sheep’s clothing, but underneath are ravenous wolves” (Mt 7:15).  That’s why we have to focus more on politicians’ actions, rather than their words.  This goes for Presidents Trump, Obama, Biden, as well as Prime Minister Trudeau, etc.  When President Trump was interviewed years ago by the Catholic reporter Raymond Arroyo, my assessment was that the president was lying about his prayer life.  But worse than that is that President Biden and Prime Minister Trudeau both call themselves Catholic, but actively oppose our most fundamental beliefs about the sanctity of life, the human person, and marriage.

Perhaps the most even-handed assessment of President Trump has been by the American bishops.  In 2020, Fr. Thomas Reese analyzed over 160 press releases of the bishops, and the title of the article was, “Catholic bishops reprimand Trump as often as they praise him”.  The bishops, even those with whom I disagree concerning practical application of principles, made intelligent and thoughtful criticism.

Here’s the list of issues on which they criticized the president: immigration, foreign policy, death penalty, environment, housing.  They attacked his administration with the following words: ‘misguided and untenable,’ ‘appalling,’ ‘devastating,’ ‘heartbreaking,’ ‘unlawful and inhumane,’ ‘callous,’ ‘disturbing’ and ‘contrary to American and Christian values.’  They said, “We are deeply disappointed that the Administration continues to push forward to end DACA,” which protects children from deportation who were brought into the U.S. illegally as children.  They also opposed his border wall, his treatment of asylum seekers, withdrawing from a treaty on nuclear disarmament, withdrawal from the Iran nuclear agreement, his embargo of Cuba, the Equality Act, etc.

These issues are important, because sometimes people accuse Catholics or pro-lifers as being one issue, and that might be true of a few, but not most.  We care about many issues, and do what we can to help. 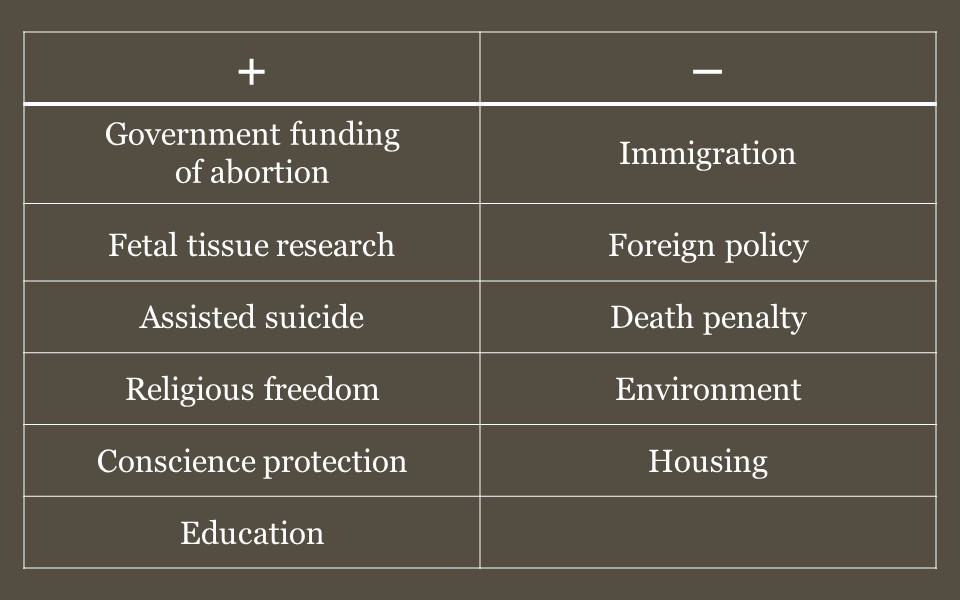 This is the argument many pro-life people make.  Many issues are important and all should be given their due, but abortion is the number one moral issue because it’s life and death. 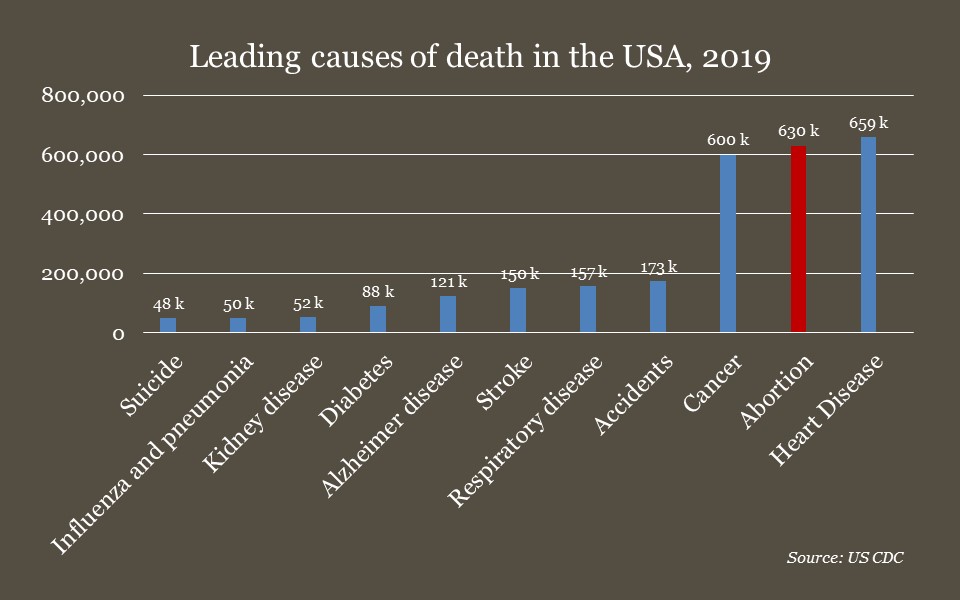 Maybe you’re not surprised but I guess Americans really love their burgers.  But the moral difference between abortion and death by heart disease is that abortion is a direct action against life, while no one’s going out to end purposely someone’s life by heart disease.  If racism were the number one cause of murder, pro-lifers would have to support whoever does the most to end that.  But the number one cause of murder is abortion, and this is why many people support Trump, in spite of his other horrible decisions.  (Parents, I’m going to show one image in a minute, so you might want your children to look down in a minute.)

Some people ask: Why do we give him a pass on everything else just because he’s pro-life?  There are two answers: 1) We don’t give him a pass.  The bishops call him out on the wrong he does, and so should we.  2) Why do people give Presidents Obama and Biden, and Prime Minister Trudeau a pass when they publicly do everything they can to kill preborn babies?  We can’t say that all issues are of equal weight because they’re not.  Some issues cause direct death, others cause hardship, and some issues hurt many more people.  Again, we’re talking about the number one cause of murder that rips innocent people apart.  Here’s an image of the remains of a person aborted at 15 weeks: 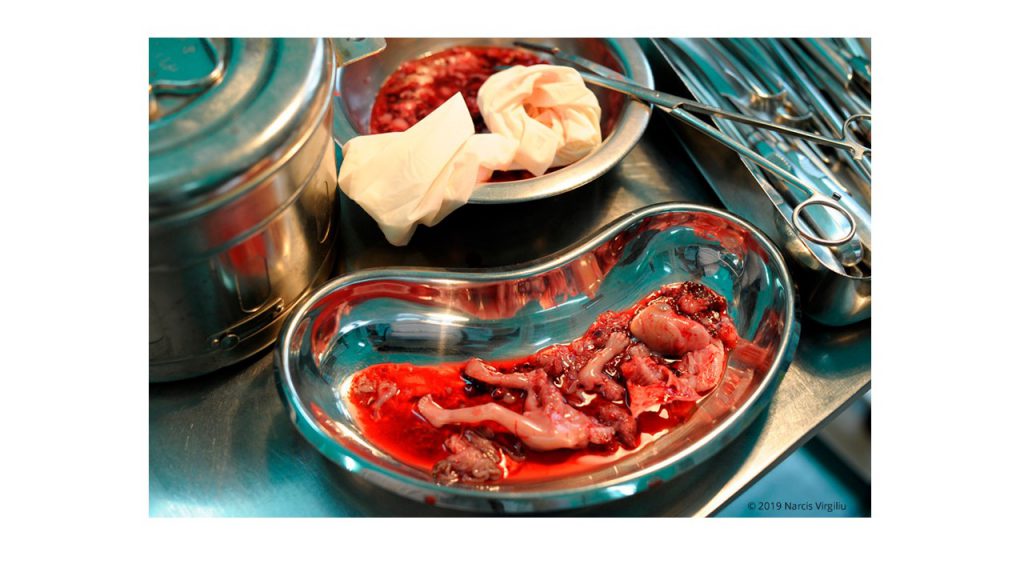 Do I think he’s playing the Christian card to get votes?  Yes.  Do I think he’s now playing the pro-life card to get votes?  Yes.  But I also think he’s changed his mind on life issues since 1999, when he said he was pro-choice.  Yet, even if he does this to get votes, the Susan B. Anthony List, a pro-life group in the U.S., actually has a list of 16 factual pro-life accomplishments of President Trump, including preventing $8.8 billion from going to abortion worldwide, cutting $60 million from Planned Parenthood, and signing an order that if a baby is born alive after an attempted abortion, that baby should be given care.  You know a tree by its fruits.

And if President Biden wanted to get pro-life votes, all he’d have to do is fight for preborn babies!  He’d have my support!  When I say personally that I favour Trump over Biden because I’m trying to do the greatest good possible, this does not mean that I support the wrong he does.  And all this reasoning I would apply to Prime Minister Trudeau.  He’s got good in him, too… like a great name.

Being consistent in our pro-life views is who we’re meant to be.  Voting for good politicians is an important duty, but maybe more important is our public witness.  This is our last Sunday reminder to sign up for 40 Days for Life.  Thank you to those who have!  This is our chance to bear good fruit. 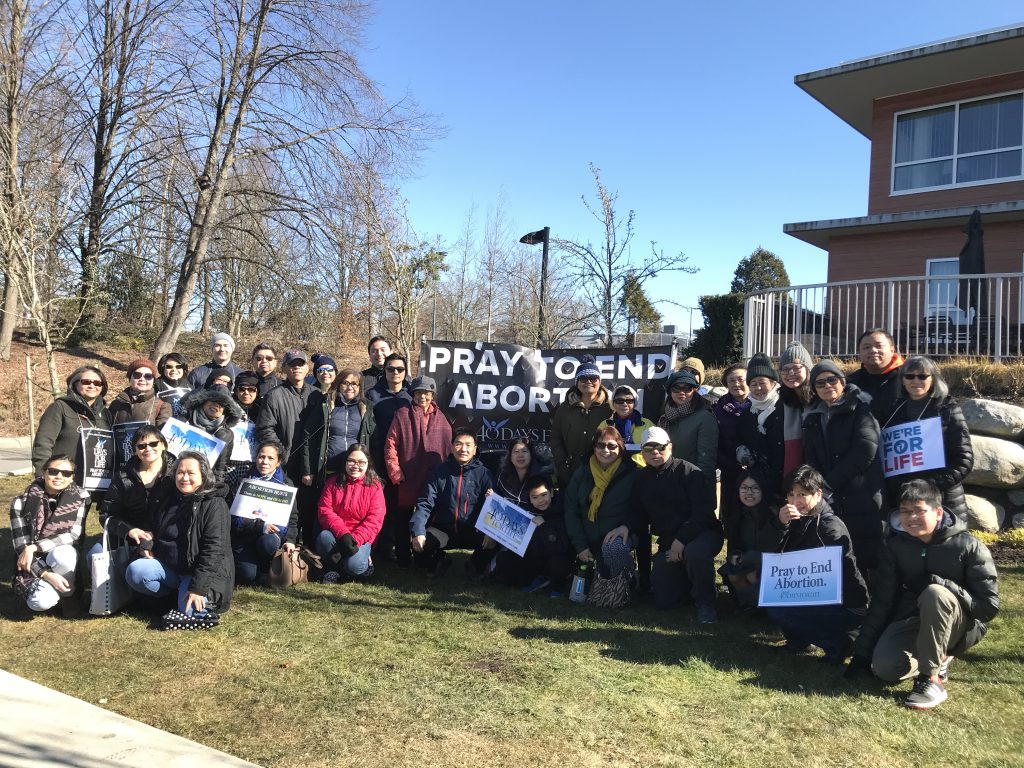 Let’s pay attention to the good and bad that people do: first of all, we ourselves.  Are we bearing good fruit?  Then we can pay attention to politicians.  Ultimately, we know a tree by its fruit.