We’re going to display three very strong quotes about abortion, and please identify which of them comes from Pope Francis: 1) “Have you ever wondered why you do not see many dwarfs on the streets?  Because the protocol of many doctors… is to ask the question: ‘Will it have problems?’ …  In the last century the entire world was scandalized over what the Nazis were doing to maintain the purity of the race.  Today we do the same thing, but with white gloves”.

3) “What is thrown away is… often human beings themselves, who are discarded as ‘unnecessary.’  For example, it is frightful even to think there are children, victims of abortion, who will never see the light of day”.

All three statements are from the pope, even though he’s famous for his 2013 statement, “Who am I to judge?”  The world and media loved this, because the sentiment was that Christians and the Church should stop judging people.  However, the reality is that Pope Francis judges all the time: He compares abortion of children with defects to Nazi eugenics, and compares abortion to hiring a hitman.

We know Jesus wants us to judge actions according to His standards, and insofar as we’re able to assess the action, because He says, “If your brother sins, rebuke him, and if he repents, forgive him” (Lk 17:3).  Rebuking people implies a judgment of their actions.  He also tells us, “First take the log out of your own eye, and then you will see clearly to take the speck out of your brother’s eye” (Mt 7:5).  We must correct ourselves first, so that we can correct others.

Yet, in all these cases, when we make judgments and disagree with people, we should be very wary of judging people’s hearts, unless we have clear evidence.  One of my greatest frustrations is with the mainstream media.  Some months ago, I talked to a man after Mass about CityNews, for which he works.  I asked him about the bias I saw at CityNews, and he mentioned that they’re not getting orders from some headquarters telling them to only focus on certain stories and purposely favour one side of the story.  He himself has sometimes written on conservative issues and no one responds to it online.

So, I shouldn’t judge the hearts of people who work in media—that’s a good reminder.  There’s evidence that most people in the media are left-leaning, but that’s for another homily.  At the same time, we cannot be naïve.  For example, how many people do you think are here in this video?

This was the annual Jan. 21 March for Life in Washington, D.C. with an estimated 150,000 people.  Not a single mainstream Canadian outlet covered this.  Could you imagine if this were a Pride parade?  I myself never believed that the media could be so biased until I went to this march years ago, and saw that the nightly news put it exactly at 11:29 p.m.

We need to focus on the issue of the media, because I’m not sure how many people realize that the information they get on moral issues can be filtered and sometimes altered.  For example, if you google the phrase, “Pro-lifer kicked,” this is what you’ll see.

Could you imagine if this were a transgender person getting kicked?  There would be protests all over the country.  We can’t judge Jordan Hunt’s heart, but what he did was wrong.  And more to the point, CityNews ran this headline, ‘Salon facing threats over ex-employee’s alleged assault’.  The place where Hunt worked is the focus, not on the person getting kicked!

For decades, the media has pushed abortion, for which one of the reasons is to stop women from having back-alley abortions.  But, many people have questioned these numbers for years.  And recently, the British newspaper The Telegraph reported that 12,000 back-alley abortions were happening in Malawi, but then they admitted there are only 2,100 maternal deaths in the country annually, of which back-alley abortions are only a few.

I can judge consistent evidence: The media’s not reporting on abortion, altering the information, or outright lies contribute to the greatest number of deaths every year.  Here’s the slide from last week, updated by seven days: 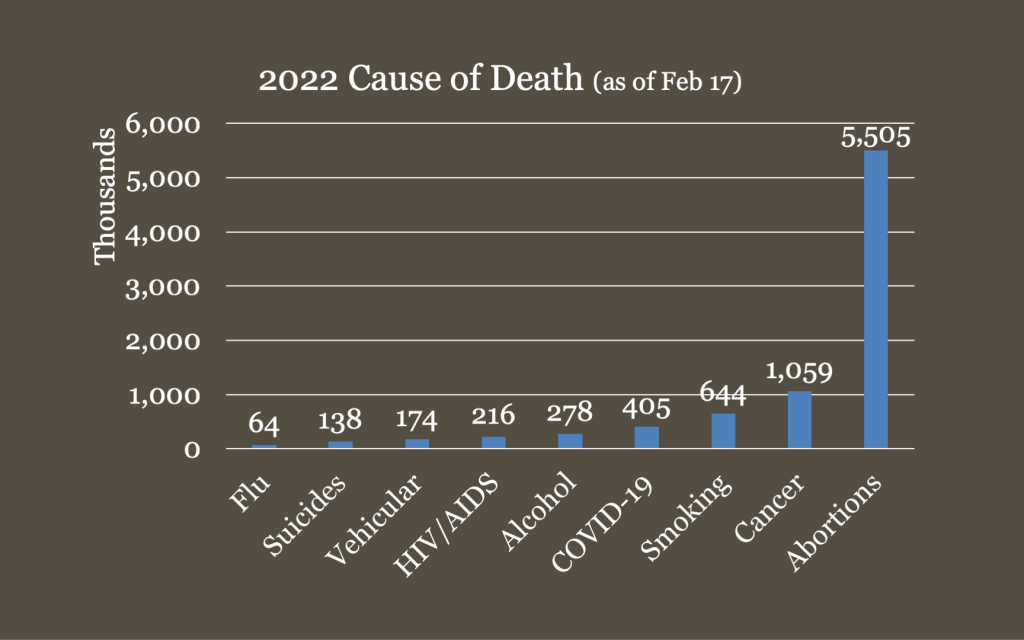 That’s why this reporting is the absolute worst.

As we’ve mentioned, we’re inviting everyone to participate in our 40 Days for Life prayer vigil, where we publicly pray against abortion taking place at B.C. Women’s Hospital.  It’s peaceful, and it’s a way of getting used to standing up for life.  We don’t engage people, because this vigil isn’t about that.  But we’ll do that in the future.

If you responded to our email, thank you!  But we also have cards in the pews that might be easier for you to fill out.

We end now with a video from the documentary I Lived on Parker Avenue, about Melissa Coles, who went to have an abortion, then changed her mind because of pro-lifers.  She then gave her son, David, up for adoption, and this video is about their meeting.  I’ll show part of the video, then make a comment, and then end with the second part.

It’s really important that we don’t judge the hearts of people who have abortions, because we don’t know.  We don’t know what pressure they’re facing, if they’re scared and conflicted as Melissa was, and if there’s anyone who can help them.  That’s why it’s so important to support crisis pregnancy centers, so that we’re there when people need help.  It’s finally important that we don’t judge people who get pregnant when they’re not ready, so that they don’t feel any pressure to kill their child.

On the other hand, what that one pro-lifer did was right, shouting out, “That baby has ten fingers and ten toes and you’re going to kill it!”  Those words, as tough as they are to say and hear, saved David’s life.  Do we realize that?  We’re talking about life and death.  Those words and that pro-life witness allowed for Melissa to give birth to David, give him up for adoption, and then meet him 19 years later and celebrate life.  After this video, please think about signing up to save lives!