“Blessed are you when people hate you, and when they exclude you, revile you, and defame you on account of the Son of the Man…  But… woe to you when all speak well of you, for that is what their ancestors did to the false prophets” (Lk 6:22,26).

How do we apply these words of Jesus to our lives?  Who in your life hates you because of the good you do?  The message of Jesus is that, if we do His will and stand up against evil, people will hate us and this parish.

There are many priests about whom everyone says good things—we think that’s a compliment, but it’s a damning statement.  It’s a sign they’re not doing their job; they are, as Jesus says, ‘false prophets.’  They make everyone feel good, but don’t make anyone actually good!  They’re nice guys, and Jesus says woe to them.  Jesus doesn’t want us to be nice, as we’ve said so many times before, because nice people never do their best to end evil.  He wants us to be respectful and courageous.

1) The words ‘hate,’ ‘exclude,’ ‘revile’ are an attitude, an action, and speech.  And to ‘defame’ literally means to cast out our name.  Why?  Because we bear the name of Christian.  That leads to the second point.

2) Jesus says we’ll be hated ‘on account of the Son of Man.’  This is important, because we shouldn’t be hated because we’re jerks.  It’s only blessed to be hated if we’re following the Bible’s and Church’s moral teaching.

Jesus criticized people because of love, and so we should never criticize people in an arrogant way.  We only do it because we truly love them, and because we love Christ more.

3) We need to understand the weight of the word ‘woe.’  St. John Chrysostom tells us that Jesus is lamenting our fate, and telling us that great punishment awaits us (Ancient Christian Commentary on Scripture, Luke, 106).

On the other hand, Jesus says that if we’re hated because of Him, “Rejoice in that day and leap for joy [or dance], for surely your reward is great in heaven; for that is what their ancestors did to the Prophets” (Lk 6:23).  You know, a few times I’ve heard of youth in our parish getting mobbed online for defending a Church teaching, and my first response is, “Sweet!  Congratulations!”

Why?  Because being rejected is a sign we’re good Christians!  Everyone wants to be good, and we usually take it as a sign that we’re good when people respond positively to us.  However, as we morally grow, there comes a point when people get angry that we don’t swear, don’t get drunk, and don’t agree with their opinions.  And Jesus reminds us: “This is the sign!  Being rejected is a sign that you’re following Me!  If everyone speaks well of you, you’re no longer a good person; you’re a coward and a conformist.”

You might be wondering: Is it possible to fight evil and not be hated?  For example, can I fight against abortion, pornography, sexual abuse, etc., and still be loved?  Well, first, if we’re against evil and everyone still loves us, we’re probably not fighting hard enough.  Second, if you think about how evils were rooted out in history, it all took suffering.  The civil rights movement in the 20th century in the U.S. took so much suffering and blood; the activists were peaceful, but their opponents were violent.  Third, from my own experience, if we’re against abortion and no one’s hating us, it’s because we’re essentially ineffective.  No one hates us because we’re so unthreatening that they don’t even take us seriously.  But, when we show pictures of abortion, then we’re really fighting and then our opponents try to shut us down.

So, let’s look at the statistics of abortion in 2021, according to Worldometers: 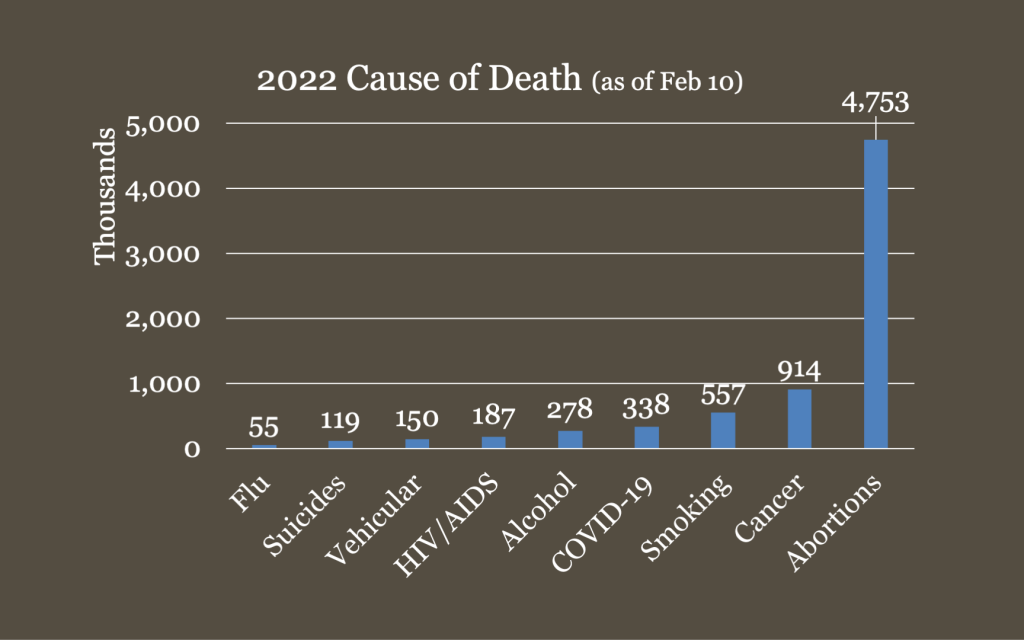 Abortion is the number one cause of death again.  Yet, this doesn’t seem to register with most people, it doesn’t anger them.  Most Christians still act like it’s not that bad.

Could you imagine if racism were causing these many deaths; 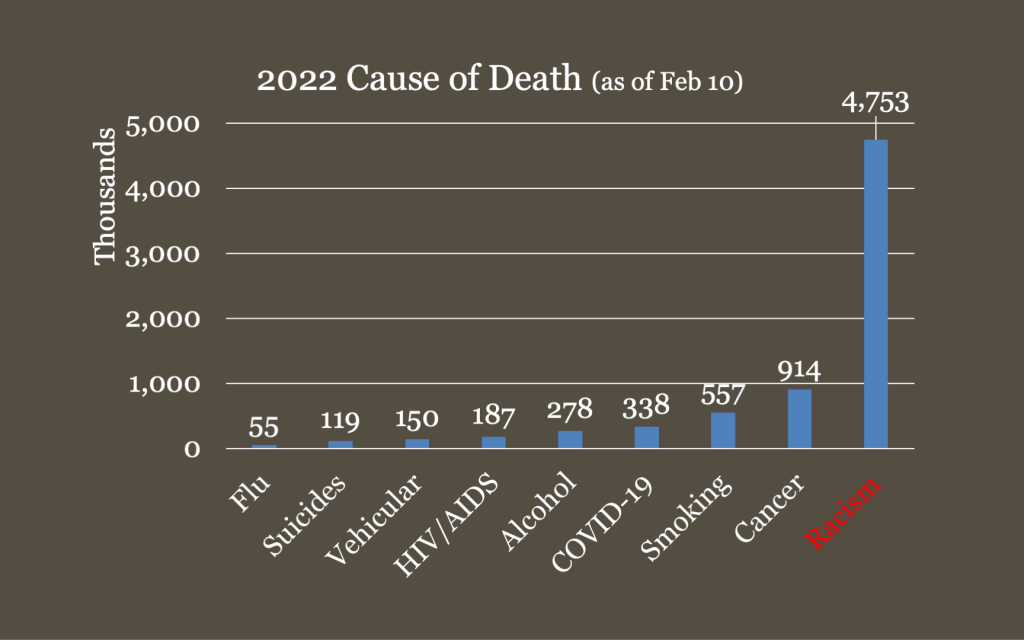 if these were deaths at residential schools? 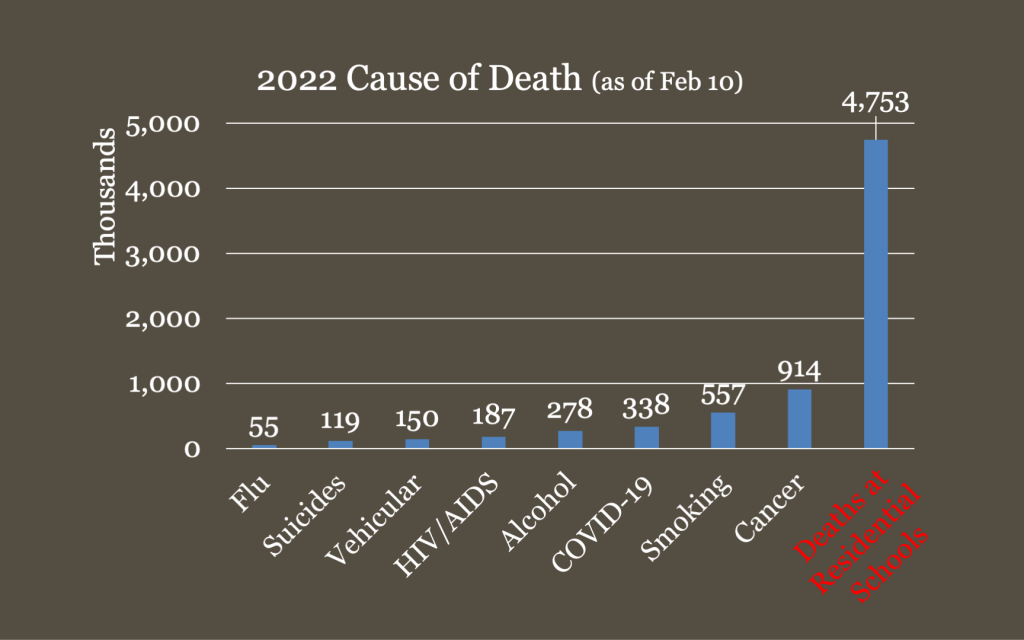 We know those deaths are wrong, but we’re not moved by the deaths of the unborn.  Something needs to change.

We need to start looking at these facts and stop following public opinion.  For example, everyone now knows that Christians shouldn’t have been involved in taking First Nations’ children away from their homes and destroying their culture.  But how did the Christians back then not know this was wrong?  The likely answer is that they just went along with society.  Maybe some disagreed, but what could they do?

The same question will be posed about our generation in 100 years: Canadians were killing 100,000 preborn babies every year; why didn’t Catholics back then do anything about it?

We have to stop going along with public opinion and say the truth: The greatest cause of murder and death in the world is abortion.  It’s not racism.  It’s not COVID.  It’s not the latest evil that gets everyone in a frenzy.

Now, let me be clear: Each cause deserves its due and should be supported.  We should fight racism, and we should stand up for truth and reconciliation for the First Nations’ peoples.  But truth matters.  We cannot say these issues are more important for Canada when abortion is killing by far more people.  Yet, we Catholics are afraid to say this.  Catholic schools have days against racism and in support of truth and reconciliation, but where are the days against abortion?

And don’t support Truth and Reconciliation just because it’s popular; support it because it’s right.  There will be no lasting truth or reconciliation the way the media leads it, because, as long as COVID is more popular, as long as floods happen, and the tensions in Ukraine continue, no one will care.  We must support causes not because they’re popular, but because they’re right, and abortion is the number one moral cause.

By Monday, you’ll get an email asking if you’re willing to do some public witnessing for pro-life.  We’re going to do our annual 40 Days for Life prayer vigil, which is peaceful and effective.  Some people will love us, and some will hate us!  And Jesus will say, “Sweet!  Congratulations!” 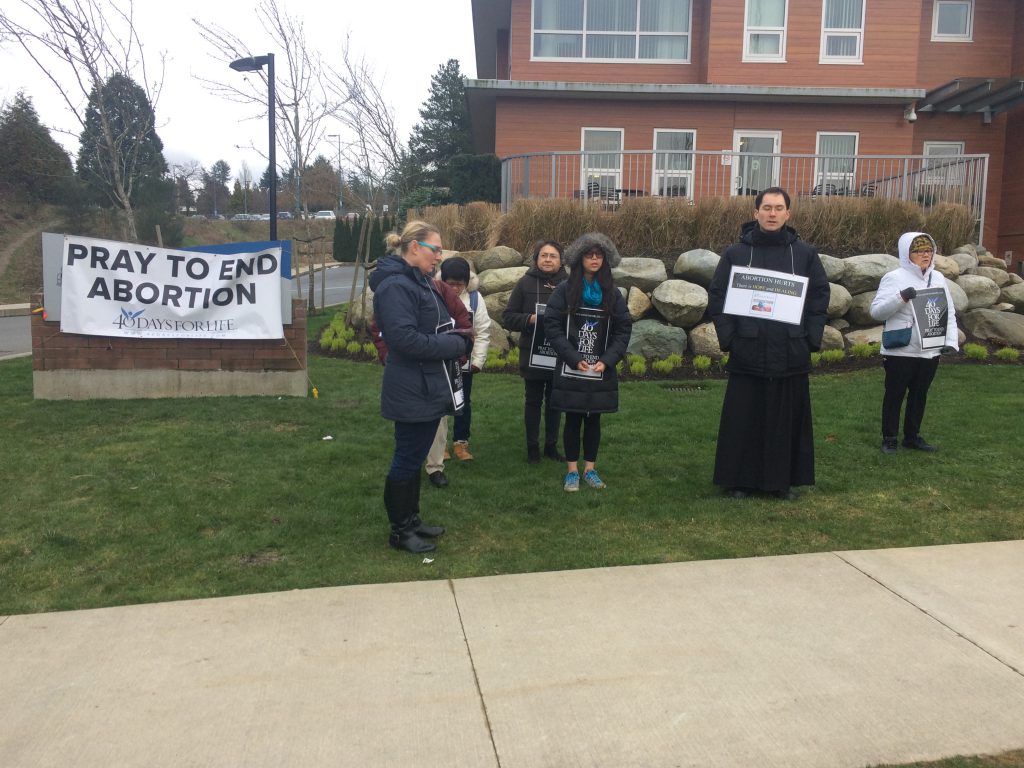 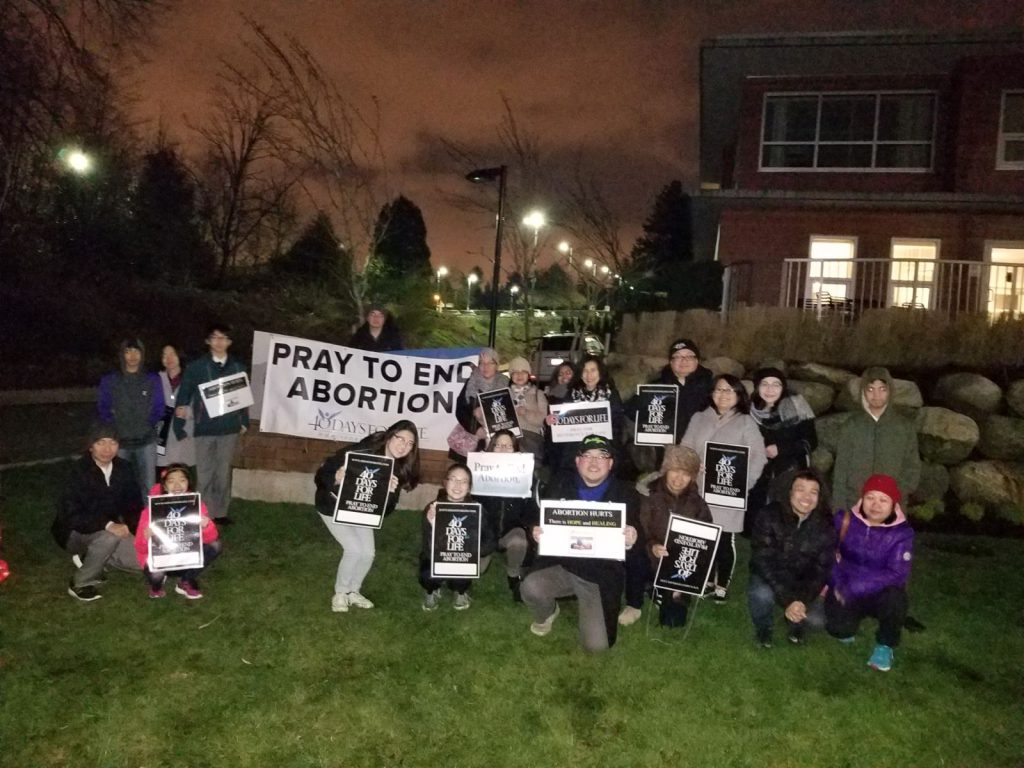 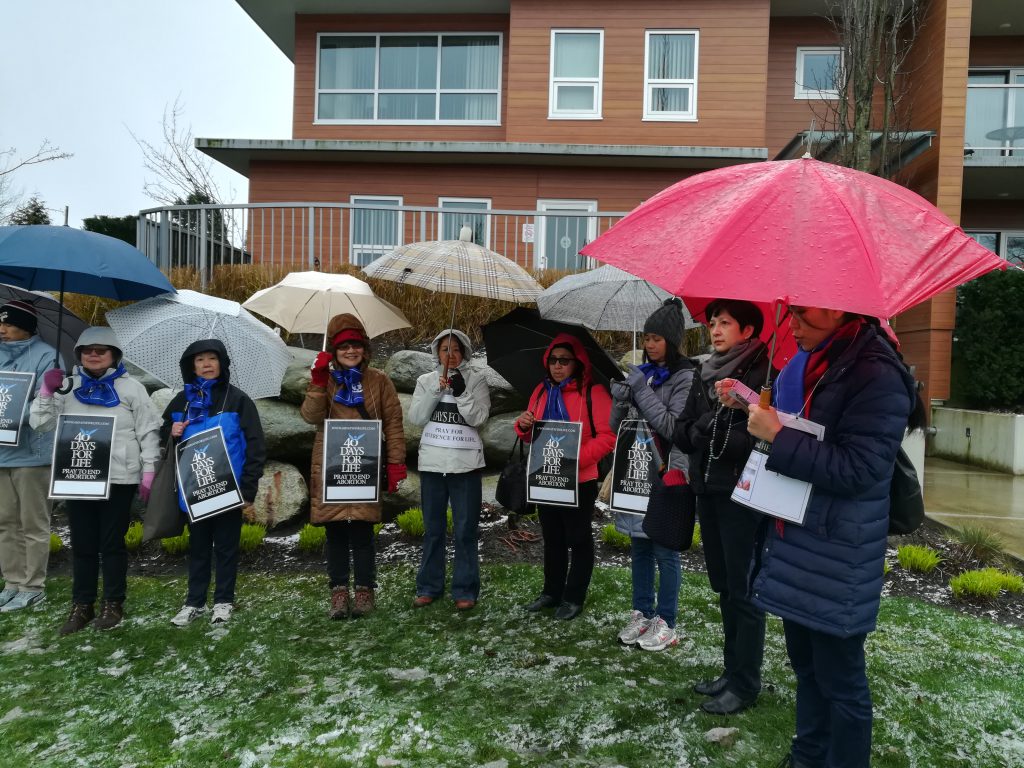 Also, I think next year we need to do more activism, and join the Canadian Centre for Bioethical Reform in showing these pictures publicly. 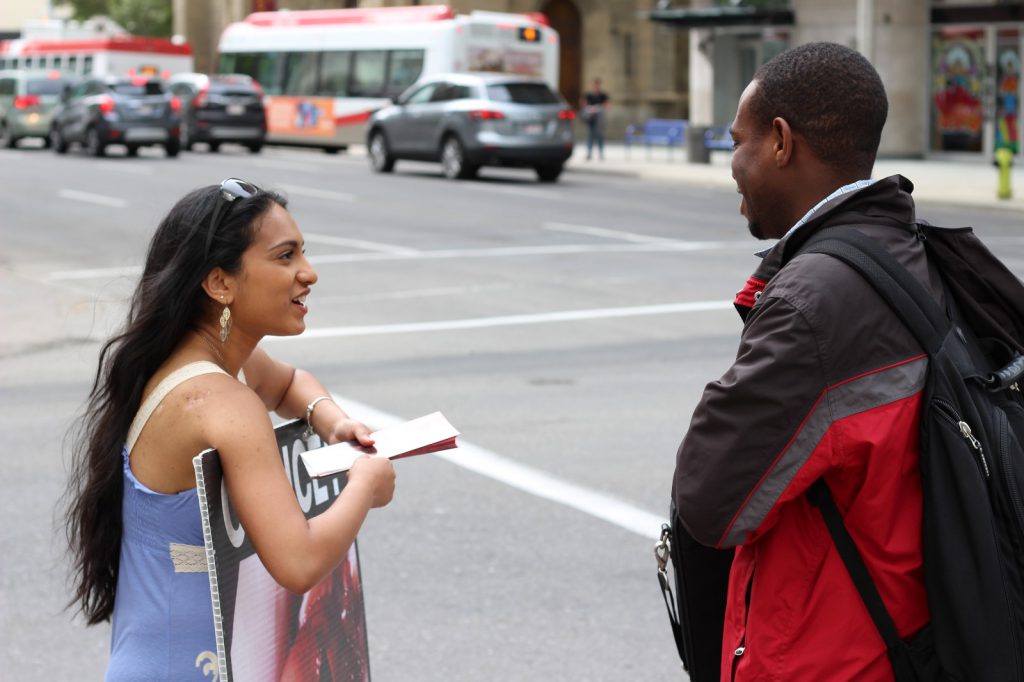 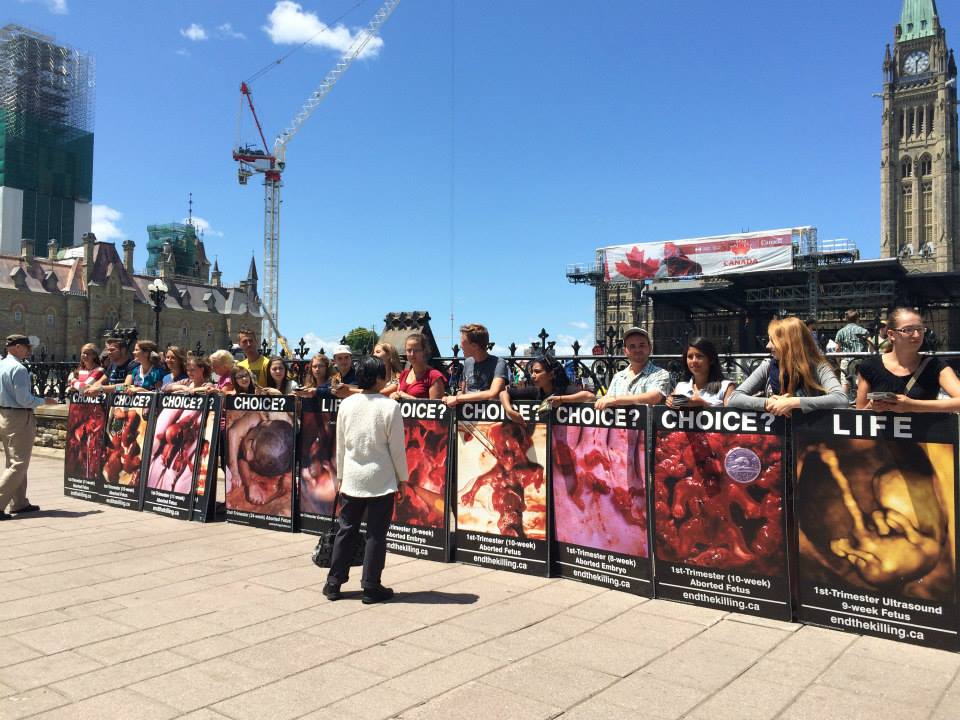 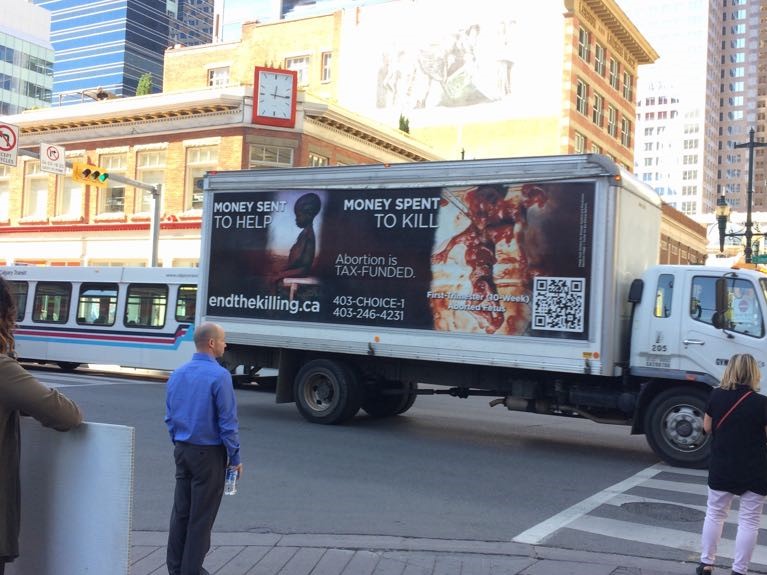 The First Reading today is about trust in the Lord.  How much do we trust?  By doing this, we’re going to get some hate, but this is a sign we’re following Jesus.

I’d now like to finish off with a short video of two of our parishioners, Gerrit and Irene Van Esch, to explain their experience of being pro-life witnesses.