Let’s talk about whether or not we’re going to heaven when we die.  There are two attitudes we need to avoid in this regard.  The first says, “Of course I’m going to heaven; everyone’s going to heaven.  It’s easy: I haven’t killed anyone.”  Or, as one of my friends once did: While we were driving, I said, “Ahh, we can’t turn left here.”  He didn’t care, still turned left and said with a smile, “I’ll go to Confession.”  This is called presumption: we presume we’re going to heaven, even without Jesus or just by taking advantage of His mercy.  The second attitude we need to avoid says, “I can’t go to heaven.  I’m a horrible person.  Nothing can make up for what I’ve done.”  This is called despair.

Both attitudes are considered sins (CCC 2091-2).  Presumption is so proud it thinks it deserves heaven; it also doesn’t need Jesus’ death and resurrection.  Despair is sinful because it doesn’t trust in God’s goodness: “He’s given up on me!”  We lose sight of the fact that God still sees that we’re fundamentally good and loved, and can save us, even though we keep on falling. 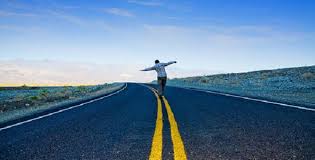 Now our job is to avoid these two extremes and take a middle approach: Because we’ve freely chosen at times to break our relationship with God, none of us deserve heaven.  Because of these free choices, we actually deserve hell.  But God doesn’t want this!  So He sent Jesus.  If we believe, love and obey Him, then we allow Him to save us.

When it comes to these two extremes, which one do we tend to fall into: presumption or despair?  If you’re the kind of person who loses hope about going to heaven, I want to tell you: “Trust in Jesus.  Don’t worry.”  But if you’re the kind of person who thinks getting to heaven is easy, “Worry.  Worry.”  From my experience, most people tend to be presumptuous, and I, for one, need a wake up call. Besides, we’ve had lots of homilies on God’s forgiveness and His power to raise us up.

St. Peter says in the Second Reading: “Beloved: If you invoke as Father the one who judges each person impartially according to each one’s deeds, live in reverent fear” (1 Pt 1:17).  The middle road is to live in ‘reverent’ fear, not of God who loves us, but of punishment, of losing something great like heaven.

Fear of judgment and punishment is good and reasonable.  Sometimes that’s the only thing that motivates us to do what’s right.  Cheating in school, for example, is more acceptable than ever.  But why do many students not cheat?  Because they’re afraid of getting caught.  When I was in school, whenever the teacher left the room during a test, more people cheated.  But they’d never cheat if the teacher was there.  Now there are some people who need to hear: We may not get caught by the teacher, but we will get caught by God.

I’m not saying this is a good way to think of God.  He’s our loving Father and for three years now, we’ve talked about doing the right thing as an act of love in response to the one who loves us.  But sometimes, because we’re immature, selfish, addicted or making excuses for bad behaviour, the first thing that motivates us to doing what’s right is fear of loss.

Two examples: 1) Some fathers are workaholics or addicted to pornography.  When we ask them, “Do you love your family?” they say, “Of course.”  “Then why do you neglect them?”  No answer.  The only thing that motivates them, wakes them up, is the fear of losing their family.  2) Many of us speed while driving, right?  What keeps us slowing down is not safety, but fear of getting a ticket.  It would be wonderful if we all said, “I’m going to leave early so I don’t have to speed, and I’m going to drive more carefully to avoid risking lives.”  But, when we’re late, we tend to speed.  And what keeps us from taking greater risks is fear of the police—not a great reason, but still a good reason for the safety of everyone.  In the same way, we should love God because He’s good and deserves it.  But we have to grow to get to that level of love; people don’t start there. 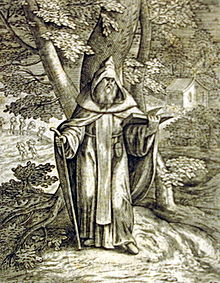 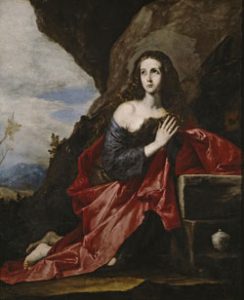 There is an instructive story about a very beautiful young woman named Thais who lived as a prostitute in the fourth century.  St. Paphnatius, a bishop, tried to convert her.  One time “he went in disguise, pretending to be a client.  She showed him a room, but he asked for one more isolated, so that there would be no interruptions.  Thais led him to a different room, but he was still dissatisfied, so she reassured him, ‘No one can possibly see or hear us.’  Paphnatius asked, ‘And what of God?  Is there no place where we can escape His all-seeing eye?’  Shocked by these words, Thais admitted with fear, ‘Alas, no’ and tearfully cast herself at the feet of Paphnatius, whom she now understood to be sent by the Lord.  The bishop then spoke to her very powerfully about God’s presence, and after Thais had confessed her sins, she went off to the desert, where she spent the reminder of her life in penance” (Fr. Joseph Esper, Saintly Solutions, 229).

God sees everything.  No sin is secret. We will be judged on everything: our actions, but also our words and even our thoughts, if those thoughts are deliberately chosen.  Let’s pause for a moment and ask: Is there anything in our life that we should stop doing?  Anything we should start doing?

Because Jesus is our loving Saviour and died for us, we know that every sin can be forgiven, so we never give in to despair.  But we should also remember that He has a tough side that demands we follow the way of love.  We talked last week about how Jesus is going to judge us based on the mercy we’ve shown.  It would be nice if the sweet Jesus reasoned with us in this way: “Brothers and sisters, there are many starving people in the world.  Would you mind giving more to help them… please?  This is the loving thing to do.”  Does this motivate you?  It doesn’t motivate me.  Why?  Reason number one from last week said that we’re a bit on the selfish side; reason three said we’re afraid of not having enough for ourselves while people are starving.  Knowing our selfishness, Jesus pulls out the big guns: In this passage, we’ll go to heaven or hell depending on how much mercy we show—that doesn’t make me think Jesus is mean; it makes me think that Jesus is serious.  And that motivates me. 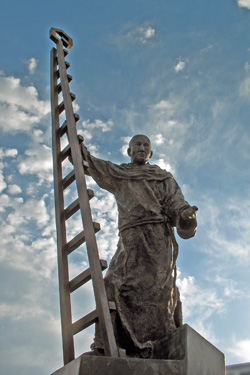 St. Benedict has what he calls the ‘Twelve Degrees of Humility.’  Now the first degree is: “That a man always have the fear of God before his eyes.”  Again, by ‘fear of God’ he’s talking about forgetting God’s commandments, fear of punishment, losing heaven.  Now this is the first degree and it motivates, but our motivation has to improve beyond this.

For example, I stopped using my cell phone when driving, not because I was afraid of getting caught, but because I started thinking: “I don’t want to be a hypocrite.  How can I preach about this if I’m breaking it?”  This is a better motivation than fear of getting punished, because it’s about integrity: “If I believe in something, then I should act accordingly.  I want to be better than this, and I’m sick of making excuses.”

But there’s still a better motivation for not texting while driving: “I don’t want to use my phone because it’s unsafe.”  St. Benedict says that if we ascend all twelve degrees we’ll no long fear punishment, but do what’s right because it’s right, because we enjoy it, and because we don’t want to hurt the one we love.

By the way, all these examples about dangerous driving leads me to tell you that in July, near the feast of St. Christopher, the patron saint of drivers, we’ll invite everyone to take a pledge to drive safely and we’ll bless everyone’s cars: Deacon Andrew and I will stand on the roadside outside the church and bless the cars with holy water as you drive by.  (Don’t run over us!)

The woman Thais who lived as a prostitute eventually became a saint!  She is known as St. Thais.  Her road to sanctity didn’t begin with assuming she was going to heaven nor did she despair because she had lived as a prostitute.  She took the middle road of reverent fear, remembering that God sees everything she does and changed her life accordingly. 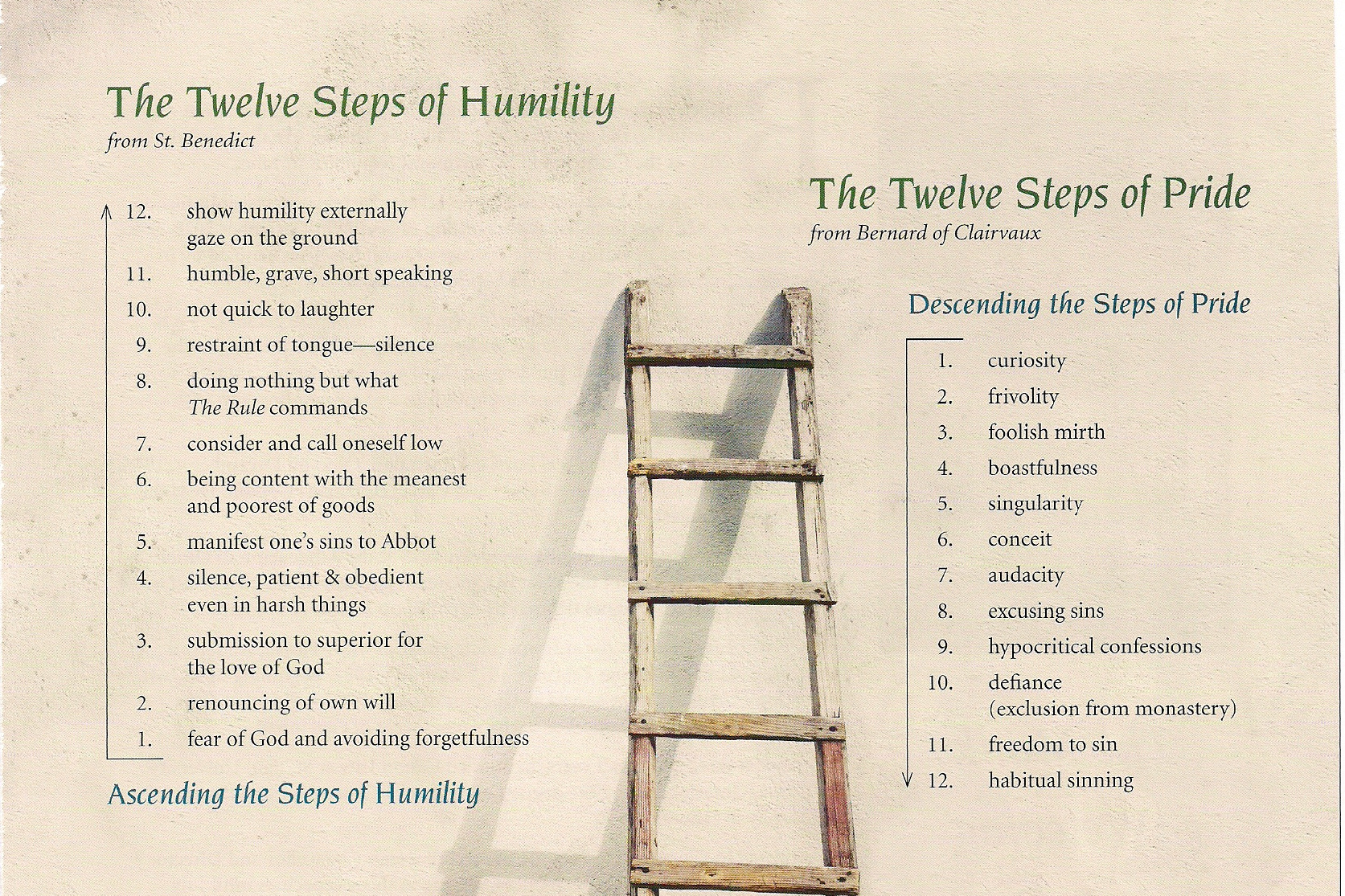