I have a happy announcement to make, one that reminds us to do some biblical reflection.  Last year, we talked about solicitude for the needy, how Jesus had a heart for the blind beggar on the roadside and asked the disciples to be intermediaries; they were the ones who brought him to Jesus.  And we said, in keeping with our parish vision to love like Jesus, it’s time to act on our decision to donate ten percent of our annual collection to those in need.  We had asked everyone a year before that to give feedback on whether this is what they felt God was calling us to do: more than a hundred people responded that it’s great, while seven had reservations.  And last year we asked you to give suggestions about whom God is asking us to support.

Today, we’re ready to donate that money.  Our annual collection last year was $414,000, so we want to donate $41,400 this year—how does that make us feel?  Maybe ten percent sounds easy in theory, but letting go of $41,400 makes us hesitate.  We’re not used to giving that amount of money away.  Some of us may think: We need that money. 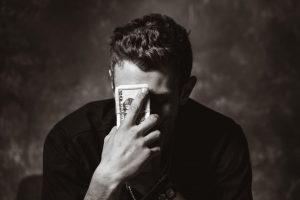 This is where we listen to God’s word today.  The Gospel starts off by referring to “the Pharisees, who were lovers of money” (Lk 16:14).  We need to ask ourselves: Are we lovers of money?  None of us would say so.  However, we are afraid to let go of it, to use it lavishly on others; we like being safe.  I wonder if the Pharisees would have said the exact same thing: “We don’t love money.”  But they do!  That’s why, if we asked them to give ten percent of their income to the poor, they also would hesitate.  So Jesus addresses the following parable to them: “There was a rich man who was dressed in purple and fine linen and who feasted sumptuously every day.  And at his gate lay a poor man named Lazarus, covered with sores, who longed to satisfy his hunger with what fell from the rich man’s table; even the dogs would come and lick his sores” (Lk 16:19-21).

The rich man’s ‘purple’ is associated with royalty; he didn’t just feast regularly, but ‘every day’; ‘his gate’ is a sign of separation from others.  It says that Lazarus ‘lay’ at the gate, but literally it says that he ‘was laid’ there, probably because he’s crippled (Daniel Mueggenborg, Come Follow Me, Year C, 227).  He was dying of hunger.  The crumbs he wanted were pieces of bread that rich people “used to wash their hands and then threw away” (Pope Benedict, Jesus of Nazareth, Vol. 1, 211).  And dogs licking his sores was insulting for Jewish people (Pablo T. Gadenz, Luke, Catholic Commentary on Sacred Scripture, 287). 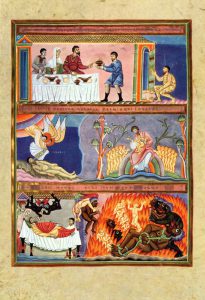 “The poor man died and was carried away by the Angels to be with Abraham.  The rich man also died and was buried.  In Hades, where he was being tormented, he looked up and saw Abraham far away with Lazarus by his side.  He called, ‘Father Abraham, have mercy on me, and send Lazarus to dip the tip of his finger in water and cool my tongue; for I am in agony in these flames” (Lk 16:22-24).

Notice the rich man is buried while Lazarus is not.  Even after death, the “rich man is only concerned for himself and his family.  He… considers Lazarus as no more than a servant to bring him water and to be the messenger for his brothers…  He was seeking mercy for himself even after refusing to show mercy to others” (Mueggenborg, 228).  He also thinks it’s enough to call Abraham father, it’s enough to be part of the Jewish people, but it’s not.  St. John the Baptist earlier said, “Bear fruits worthy of repentance.  Do not begin to say to yourselves, ‘We have Abraham as our ancestor’” (Lk 3:8).  And do you know the worst part about this rich man?  He knows Lazarus’ name (Fr. Peter John Cameron, To Praise, To Bless, To Preach, Cycle C, 119)!  Every day, while he was taking care of himself, he knew the person he was ignoring.

“But Abraham said, ‘Child, remember that during your lifetime you received your good things, and Lazarus in like manner evil things; but now he is comforted here, and you are in agony.  Besides all this, between you and us a great chasm has been fixed, so that those who might want to pass from here to you cannot do so, and no one can cross from there to us’” (Lk 16:25-26).

Pope Benedict says this parable is about an awakening.  Jesus is trying to awaken us.  “The Lord wants to lead us… toward true wisdom… to discern the real good” (Pope Benedict, 214-5).  What we’re doing with our money is also an awakening.  This is something really positive!  This is what Christians do, and what churches should do! 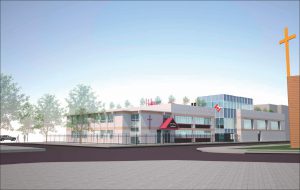 Here are a few other considerations: 1) We need a parish centre.  I want it because it will breathe new spiritual life into our community by allowing us to meet in a beautiful environment.  And I believe God wants us to have it.  But those in need could use the $41,400, too.  2) Generosity is not really measured by how much we give, but by the sacrifice it entails.  Sacrificial giving, the principle we discuss over and over again here, means that it must hurt—that’s the sign that we’re giving like Jesus.  3) At the Last Supper, Jesus asked the apostles, “‘When I sent you out with no purse or bag or sandals, did you lack anything?’  They said, ‘Nothing.’”  So, think: When we’ve given sacrificially before, have we lacked anything?  I asked Angela Cheung, who donated $55,000 to our parish centre, which was from the profit on selling her house, and got us kick-started on our best year ever of fundraising, “When you made that donation, did you lack anything?”  She said, “Definitely not.  My heart is in peace.  I don’t feel a financial burden.  Nothing is lacking.”  4) We need to stop thinking that this is something extra to what we do as Christians at St. Anthony’s.  We need to start thinking that ten percent is just part of our budget, and we’ve already accounted for this.

Our season right now is Made for Mission, and there is one spiritual gift we want to celebrate: the gift of Giving.  There are some Christians who cheerfully give money and material goods with extraordinary generosity to those in need; they find money, make money, or money strangely comes to them so that they can give it away. 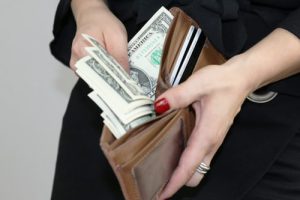 There once was a widow named Edith who went through conversion two years before retirement.  Apparently, Sherry Weddell said she was having the time of her life giving thousands of dollars away.  “She laughed, ‘If my children had any idea how much I am giving away, they would have me locked up! …  I literally cannot outgive God!  As soon as I give money away, it keeps coming back to me in the most unexpected ways.  The government has contacted me twice to tell me that they owe me money.  Who ever heard of anything like this?’” (Sherry Weddell, Fruitful Discipleship, 147-148).

To have this spiritual gift, we don’t need to be wealthy.  We are just used by God often to make provision for others, knowing that He’ll take care of us, while we enjoy taking care of others.  When someone donated to our chapel renovation, he was thanked and said, “That’s okay, it kind of makes me want to give more.”  It’s wonderful and joyful to be generous. 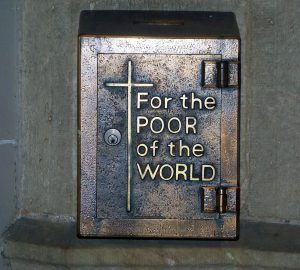 We pray that, if we’re generous as a community, we’ll be a better witness to Jesus in the world, and this can help bring people to Him.  The parable tells us that we have to make a decision, because after death, it’s too late.  So, this is where the money’s going:  Works of Mercy Donations Chart 2019  God be praised!  This is something very positive!  We’re giving to those outside our community and being fruitful!

We’re respecting the four criteria that we enunciated last year: 1) We don’t give money to groups that are against natural law; 2) We give priority to Catholic groups, not because we don’t support non-Catholic ones, but mainly because Catholic charities tend to rely on Catholics; 3) We prioritize the right to life; 4) We help local charities because they’re in our backyard. 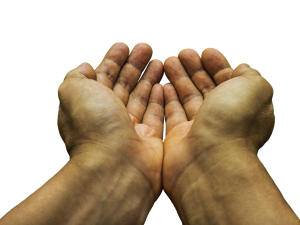 Let’s finish with a beautiful image.  We’re a hungry family, and we have one loaf of bread.  We cut it into ten slices, and give one away even though we need all ten.  Here’s the thing: If we keep our hands closed on all ten slices, that explains why we can’t receive what God is trying to give us.  In order to receive God’s love and blessings, we have to open our hands, give what He’s already given us, and receive.