Many of you have said that you remember the story I told last year about Mother Angelica’s amazing faith!  After she, a nun, started a Catholic TV network in 1981, she felt called to expand it, and so, at one point, ordered a large satellite dish without having any money to pay for it.  When the delivery truck brought it, it cost $600,000.  She said to the man, “Give me a minute.”  She went inside and prayed to God, “I thought you wanted me to have it, so You have to come through.”  When she went outside and told the man she didn’t have the money, right then another sister ran out, “Mother, Mother, someone wants to speak to you.”  It was a businessman on a yacht in the Bahamas, who said, “I’ve been reading your book, and something just told me I have to give you $600,000.”

Why do so many of us remember this story?  Yes, it’s remarkable.  But it resonates with us because we wish we had that kind of faith.  For most people, we have an awareness, though vague, that God exists and that there’s more to life than just being randomly created and having no greater purpose.  And so, when we hear of people who actually live knowing that God loves and takes care of them, we say, “Wow!  That’s how life should be.  I want to live like that.” 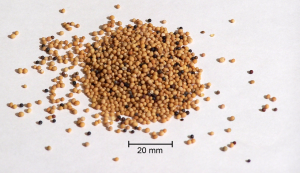 The apostles have that same desire according to the Gospel: “The Apostles said to the Lord, ‘Increase our faith!’  The Lord replied, ‘If you had faith the size of a mustard seed, you could say to this mulberry tree, “Be uprooted and planted in the sea,” and it would obey you’” (Lk 17:5-6).

The scripture scholar Dr. John Bergsma points out something interesting: Jesus’ response is not a criticism, but an encouragement.   “The point he is making… is…‘You don’t need much faith to be effective!  Just give me a little bit of faith and I can do great things for you!  Just as I took five loaves and two fish and fed 5,000, I can take a mustard seed of your faith and transplant a tree into the ocean.’”

Now, when I was young, I thought this saying of Jesus meant that all I have to do is believe God exists and then I can literally move mountains.  There are two problems with this: 1) God doesn’t do magic tricks.  He only does miracles to strengthen faith.  Jesus never used His divine powers to satisfy curiosity.  2) If we actually had such a strong faith, then we wouldn’t move mountains!  Because, if our faith were that strong, we’d use it for the highest good, that is, helping people become saints.

Having faith the size of a mustard seed means we trust God to be who He says He is: our Father.  Do you remember this comment in Matthew 13:58?  “And he did not do many mighty works there, because of their unbelief.”  Jesus does miracles if it helps us to love Him.  He Himself already loves us!  But, if we don’t have any openness to Him, He chooses not to work miracles because He knows it won’t make any difference (Cf. Summa Theologiae, III, Q. 43, Art. 1-2).

Last Sunday, we heard the rich man who was suffering in Hades say to Abraham, “Then, father, I beg you to send Lazarus to my father’s house—for I have five brothers—that he may warn them, so that they will not also come into this place of torment” (Lk 16:27-28).  Abraham responds, “They have Moses and the Prophets; they should listen to them…  If they do not listen to Moses and the Prophets, neither will they be convinced even if someone rises from the dead” (Lk 16:29, 31).  There are many rational ways to know God exists, arguments from philosophy such as causality, contingency, and morality; arguments from astrophysics, for example the fine-tuning of the universe.  Some people who are aware of these arguments, however, choose not to believe because they don’t want to believe, and so miracles wouldn’t help them.

Faith means that we know God is our loving Father Who always does what’s right for us, and will do miracles if it helps us get to heaven.  God loves us and wants a relationship with us, and faith is our response to His love.  It’s not just a merely intellectual assent that says, “Yeah, yeah, God exists.”  Faith means we trust and obey Him.

So let’s give some powerful examples of faith by talking about two spiritual gifts. 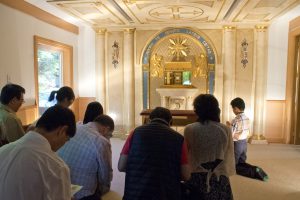 1) Intercessory Prayer.  Matthew Kelly observes that, in all great families, there’s always what he calls a ‘giant of prayer.’  “These prayerful giants pray constantly for their families, surrounding them with God’s protection…  Sometimes it is the grandmother or grandfather, the mother or father, an uncle or aunt, and from time to time you have to go back two or three generations, sometimes more…  Every family needs a cornerstone of prayer to pray for the family” (Matthew Kelly, The Four Signs of a Dynamic Catholic, 64).

One time, Matthew met a couple who had six children and 22 grandchildren, and all of them were practicing Catholics—highly unusual.  So he inquired who was the giant of prayer in their family.  It was the great-grandfather, Eddy Baranski.

Eddy grew up in Chicago, was an all-city football player, led a Catholic group at university, met a girl, fell in love, and had two children very quickly.  When he was 27 years old, during World War II, he became a secret agent for the U.S. military because he spoke German and Slovak.  In 1945, he was captured by the Nazis and tortured badly for days.  A German civilian named Werner Muller translated the interrogation of prisoners for three months of what he called a living hell, and remembered Eddy in particular, because he prayed.  When the Nazis put his body in unbearable physical positions, he prayed out loud.  When the torturers asked what he was saying, Muller told them that he was praying, and they laughed at him.  When they offered Eddy a cup of water, he couldn’t take it, because he could no longer use his arms.  Eventually they shot him.  His wife, after years of not knowing what happened to him, revealed that she had a vision of him, at the moment of his death, whole and smiling.

Eddy was a giant of prayer, and because of his faith, he prayed in terrible moments of suffering.  Now, we shouldn’t assume that we would all pray if we were in his situation, because many of us don’t even pray when we’re having a bad day!  When people cut us off, do we say, “God bless you”?  When people hurt us, we get angry; when we’re frustrated with people, we get passive-aggressive and don’t turn to God.

If we just had a little more faith in Who God is, then we’d turn to Him throughout the day, we’d stop many times to pray, and we’d spend more quality time with Him.  Faith doesn’t necessarily mean our prayer will always be focused and consoling, but we’ll want to pray.  And then, during moments of crisis, our first response will no longer be anger or resentment, but prayer.

Our parish needs more giants of prayer, people who have the gift of intercessory prayer, who pray for others in an intense, sustained way.  Those who have this gift “tend to see remarkable… answers to their prayers for others on a regular basis.  They have a tremendous confidence that God hears and will answer their prayers.  They find praying for others energizing” (Sherry Weddell, Fruitful Discipleship, p. 169). 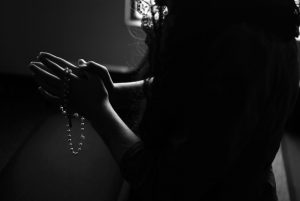 In 2015, a 25-year-old woman contacted me out of the blue asking about Catholicism.  We met once but I never saw her again until two years later, when she got more serious and joined Faith Studies.  A year after that, she became Catholic at the University of Victoria.  When we were struggling to hire people recently, I asked her to pray for this, and very soon after that, we were able to hire.  I believe she has that gift of intercessory prayer.  And she’s now discerning a call to religious life, to be a sister.

With this in mind, we’ve put sign-up cards for our Intercessory Prayer ministry, which is the source of strength for the community.  We currently have 75 people who offer prayers, suffering, and sacrifices for the intentions that I give them every week in a video.  If you feel called to serve in this way, please sign up and pray for us as you can.

2) The second gift is called Extraordinary Faith.  This is a radical trust in God’s power and provision.  This is like a man smuggling Bibles into the Soviet Union, knowing he could be arrested, and not feeling any anxiety.  Or like a couple who moved to Taiwan with their eight children to serve as missionaries, and then to Vancouver, and the father was willing to work at a job lower-paying than he’s used to, but God always takes care of them.  We see it when a 45 or 50-year-old man leaves his career to discern a vocation to the priesthood, knowing that it’ll be very difficult to get back into his profession, and then, when he’s not called, isn’t angry with God, because he knows it was part of God’s plan.  We also see it when a couple feel they can’t have another child, but are open to God’s call, and know that, if they have another child, things will be okay. 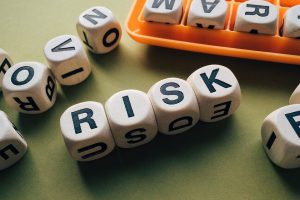 How do you spell the word ‘faith’?  R-I-S-K.  The measure of our faith is the measure of the risks we take for God.  It doesn’t mean unreasonable risks for some frivolous reason, but for Him.  Do we pray in public?  Do we speak what is true or do we censor ourselves?  Are we the first to forgive?

Extraordinary faith is a rare gift, but perhaps some of us have it.  As we’ve said before, we can ask for these gifts.  If our faith is weak, ask Jesus to increase it.  He always gives it.  All we have to do is receive it.  And no one can take it from us.  Either we choose to receive faith or we choose to throw it away.

We finish again with Mother Angelica’s extraordinary faith.  When she started EWTN, Eternal Word Television Network, it seemed like a joke to many people that a nun would start a TV network.  Yet it’s now the largest religious media network in the world.  Bishops and wealthy men tried to start something similar and all failed. 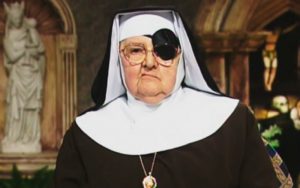 And, who here, if we ever had a stroke and drooping face, and had to wear an eyepatch, would go on TV or film videos of ourselves?  None of us would.  It’d be too embarrassing.  However, Mother Angelica wasn’t worried about what people would say about her.  She still went on TV.  And people did make fun of her!  Faith doesn’t mean life will be easy, but it means it’ll be fruitful and God will do miracles.  Mother would say: “God expects His people to do the ridiculous so He can do the miraculous.”  Here’s a video we’ve shown before, about Paul Darrow, and how he lived a gay lifestyle and a wild life, but found true life in Jesus and the Eucharist.   But now, pay attention to what God did in his life through Mother Angelica’s faith in Jesus.  She had only a little faith, and let God move mountains.